Pick fruit, find love and get likes on Instagram.

That’s the message Deputy Prime Minister Michael McCormack is using to appeal to young Australians, as he tries to fill the looming harvest labour shortage of around 26,000 workers by March.

In itself, the message is a pretty cringeworthy attempt to lure young people across the country to ditch the dole in favour of ‘fun on the farm’ – even claiming that regional work could ‘change the way you live’.

Farm life: I ended up doing regional work in Bundaberg to get my 88 days done and dusted – and while an incredible experience, there’s some things that are a physical nightmare. (Pictured third from left)

But reluctantly, every word McCormack is saying rings true for me.

As a backpacker, I did end up falling head-over-heels in love on a farm, have an abundance of friends I’ll have for the rest of my life and carry so many ridiculous memories that I won’t be forgetting in a hurry.

He pretty much has it bang on.

However, within his speech of positivity, McCormack didn’t explore why working in the farm industry in Australia can be an absolute horror story for so many young people around the world.

Extremely low pay, sleazy farmers and getting hit and screamed at by supervisors all appeared to be part and parcel of working in agriculture, and something we heard about all too much during our three months on a farm.

As I hail from England, like every backpacker we’re required to complete 88 days of regional work in order to apply for a second working holiday visa in Australia – unless you’re sponsored by an employer, or go on a partnership visa. 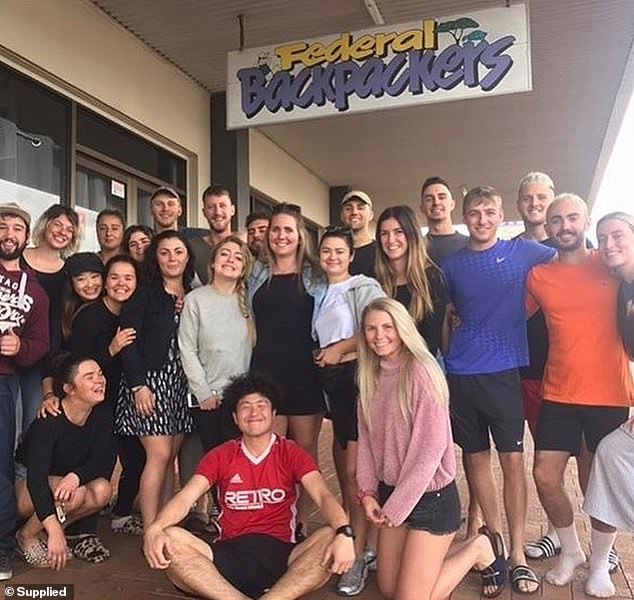 Friends for life: We stayed with the same people in our working hostel during the pandemic. Pictured: Outside Federal Hostel, weeks before the entire building burned down in front of us

‘Have a go, come to regional Australia, bring your mobile and have that Instagram moment… up a ladder, picking fruit, blue sky in the background, wonderful country breeze, wonderful friends around.

‘You’ll find more friends. You might even find the love of your life out in regional Australia.’

Despite everyone telling me not to, I chose to do my farm work at Federal Hostel in Bundaberg, Queensland, which is a hotspot for international backpackers on the hunt for hourly work.

For a whopping $236 a week – the same amount I was paying for a double bed in Coogee in Sydney – you’re placed on a waiting list for a coveted hourly paid job, and share a room with eight other people all eager to get their days done and get back to city life.

The rooms themselves were pretty run down, bonking was rampant on the bunk beds nearby so you never truly got a good night’s sleep, and we were fined $500 if even a slither of alcohol was found in the hostel.

At first glance, I figured I’d just be popping a couple of lemons into a basket and drinking goon for the rest of the time.

But while the latter was completely true, the actual work resulted in countless breakdowns, people tearfully leaving their jobs and some of the most old-fashioned and backwards treatment of workers I’ve ever known.

‘BACKPACKERS!’ I heard being screamed to us on day one of my sweet potato farm job. ‘NO TALKING!’

Now, I’m not going to lie – I honestly haven’t worked a day of manual labour in all of my 27 years, but I swear I gave it the best crack I possibly could. 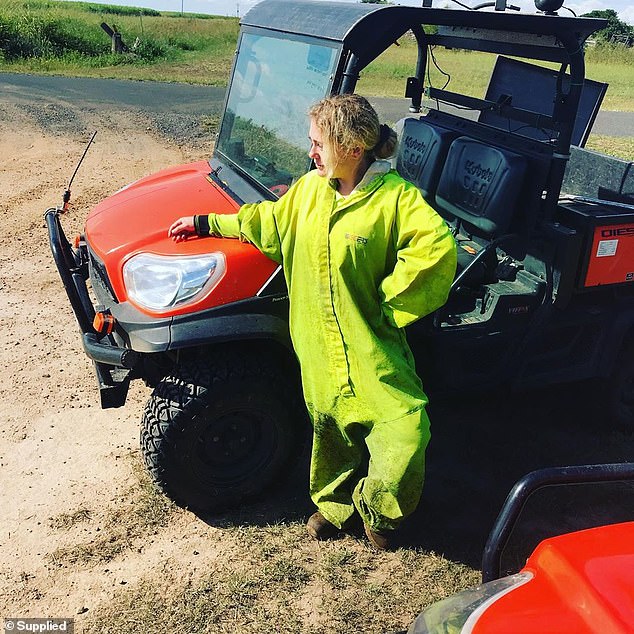 Hard life: Living in a working hostel, you often see many people who have never done a day of manual labour in their life – myself included (pictured) 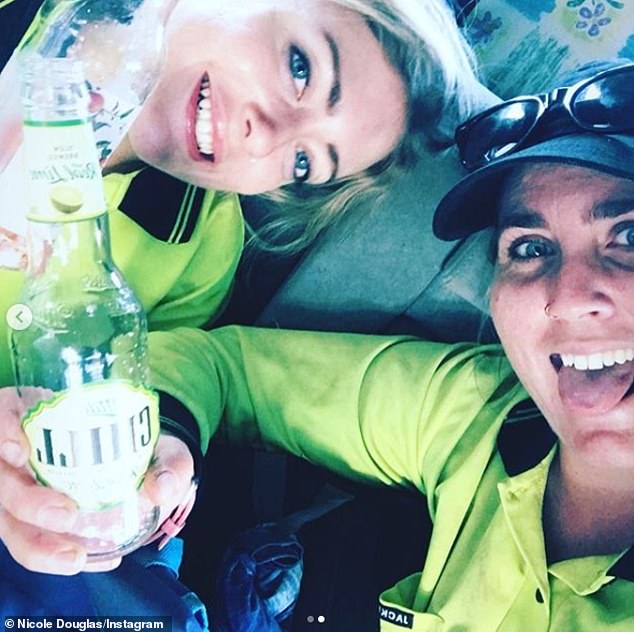 Best friends: McCormack was right about one thing – you definitely meet pals for life while working in the hellish conditions

But as we reached the sixth hour of attempting to plant sweet potatoes in the ground, I felt my legs being lightly whipped with a vine by our supervisor as she tried to make me run faster down the field.

‘You’ll have to fire me as I’m literally gasping for breath, I can’t keep up,’ I said, wondering what on earth was happening.

During my two weeks of unemployment – during which I still had to pay full rent – my friends would tell me countless horror stories of what had happened to them on their farms that day.

The same supervisor who dashed my legs with a vine ended up smacking one of the boys on the arm.

‘Everyone was shocked,’ he said, adding that the woman in question was never allowed near him again after the incident.

Our Irish roommate, Nuala, walked in one day and showed us her war wound. Her job had been to drag huge fallen macadamia trees into a giant chipper, which would grind them up into tiny pieces.

But one of the trees got stuck. Her arm was dragged into said machine, and she physically had to bang her arm against the side to be set free.

‘I almost got minced!’ she said, with a look of sheer horror on her face. But she needed to get her days done, so she reluctantly returned to work the next morning to keep on ticking them off. 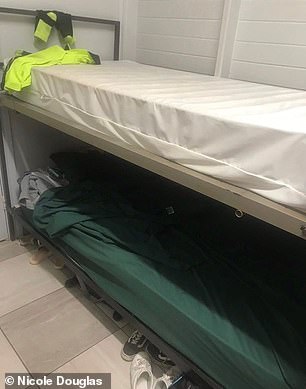 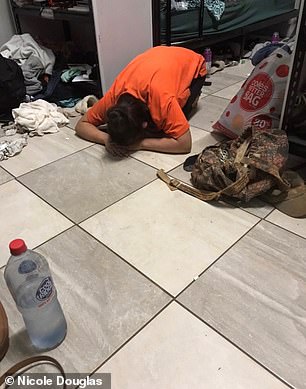 Bonking: Our hostel (pictured) would cost $236 a week, and would regularly feature rampant couples spending the night together every night 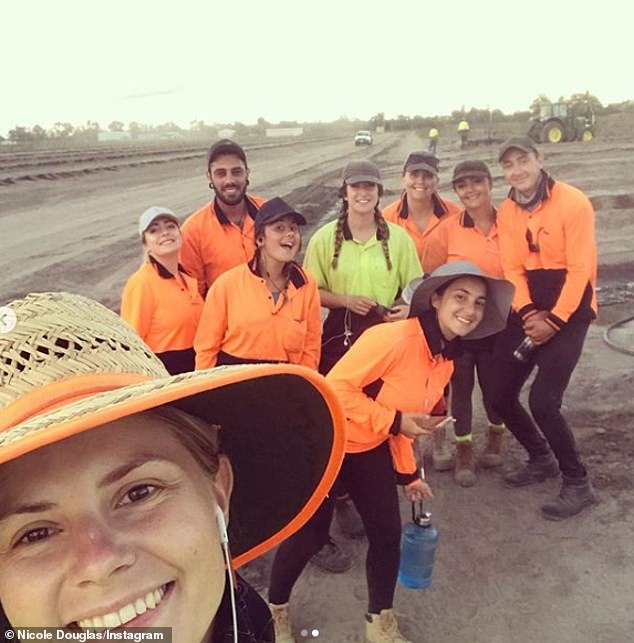 All the fun: The different hostels were filled with hundreds of backpackers all over the world, trying to get their second or third year Visas approved 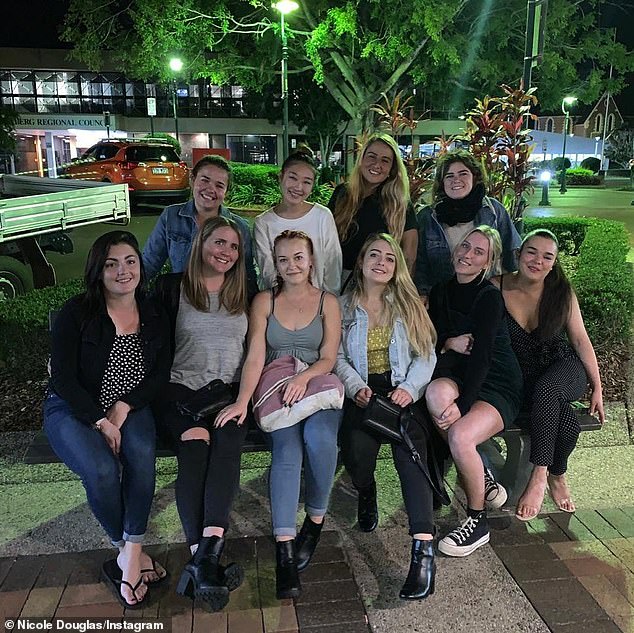 Horror stories: Every person on the farm had a different tale to tell – but it never appeared to be easy to get 88 days signed off

Another of my friends, Ellie, had been working at a different hostel on ‘piece rate’ – where you’re paid for what you pick, rather than an hourly wage.

‘It was f**king grim,’ she said. ‘The lowest we got paid is about $23 for hours and hours of picking, and there was just nothing to pick. We couldn’t afford rent, but of course they didn’t care and we had to pay anyway.’

Because a lot of the work is aimed at boys, some of the girls I met found that they even turned a blind eye when it came to sleazy farmers making advances towards them.

‘I let him touch my bum, because I honestly needed to keep my job,’ a friend of mine said to me.

When another of my pals was out in the field, a radio went off in one of the vans – one which is connected to all the other farmers.

‘I can’t concentrate today,’ the creepy farmer said on the other end of the line. ‘She’s got her short shorts on.’

On a different farm, I was asked to fix water sprinklers in a field when one of the farmers came over to me.

And this is it; for so many, things that are normally so hideously outrageous become ‘just another day’ on the farm. If we don’t do the days, we have to leave the country. It’s as simple as that. 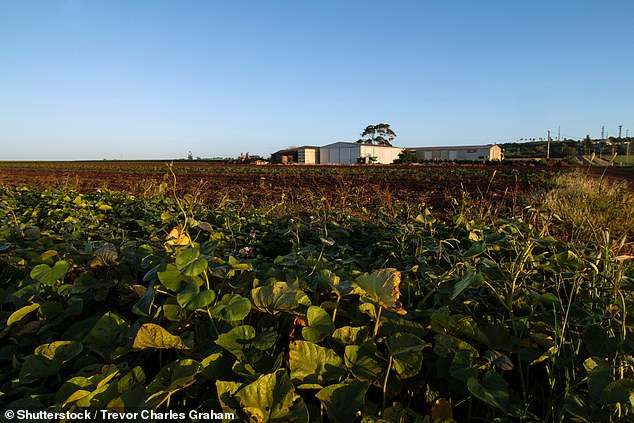 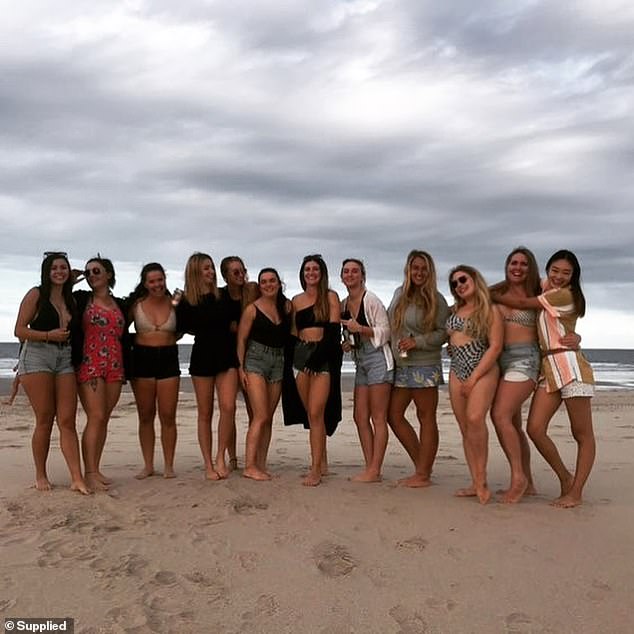 Bliss: For the most part, farm life was an unbelievable experience that not one of us will forget

Following my dramatically awful stint on sweet potatoes, I worked on two other farms during my season.

When COVID-19 was in full swing we were only able to socialise with those in our hostels and on our farms – getting daily temperature checks in the process – so we became a tight-knit family who spent every waking moment together.

The macadamia farm I ended up on was incredible. Working with your best friends made a world of difference, and despite a few breakdowns it was probably the best experience it could be.

And, as Mr McCormack predicted, I fell in love in the midst of farm work. I’ll never know if it was the way he seductively drove a tractor, how he made planting macadamia trees look so easy or just how stunning he was to look at, but I knew I’d fallen for Josh within a matter of weeks.

Within a couple of months I’d moved in with him, and now he’s come over to Sydney so we can live together here. I’ve honestly never been happier.

My experience was probably a little different to many others, because to top off a bizarre few months our hostel ended up burning to the ground the day before I was supposed to leave.

On the day itself, me and the girls had been drinking bottles of Prosecco to celebrate the end of my 88 days in true Bundaberg style. But as midnight drew closer, the fire alarms went off and we were forced to evacuate the building. 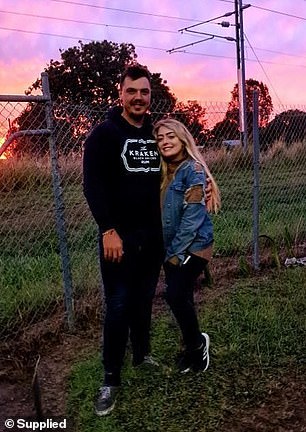 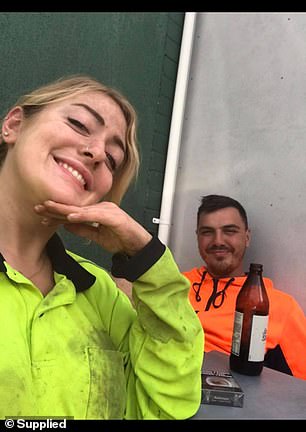 He was right! I ended up finding love on a macadamia farm (Pictured with Josh) 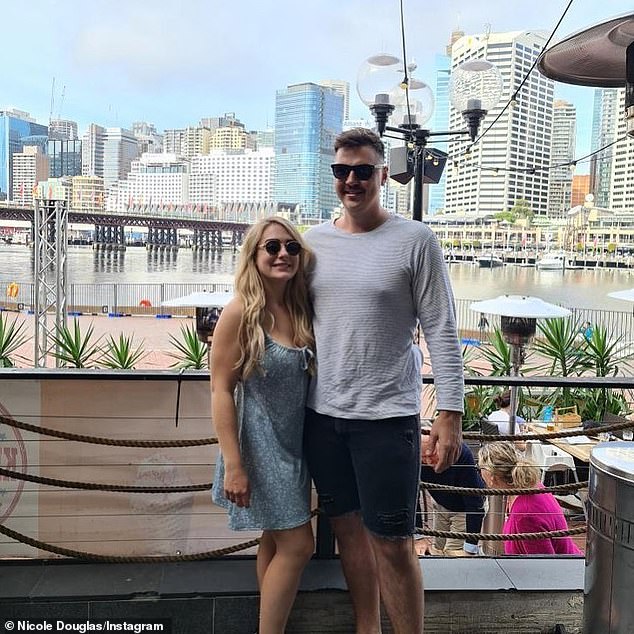 Moving on: We’ve now moved away from Bundaberg and back into Sydney 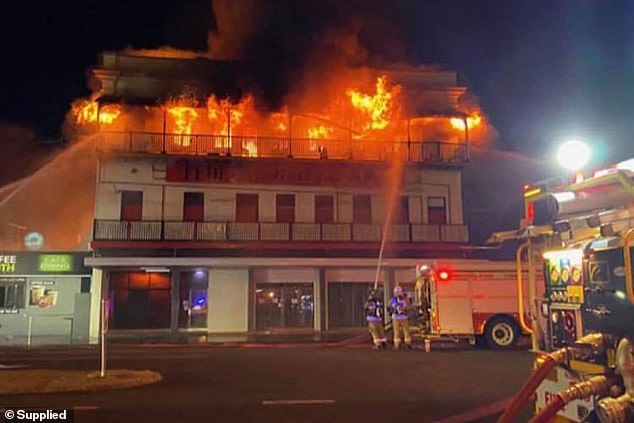 Horror: What started as a small fire in the pub next door, turned into a blazing inferno which engulfed our entire hostel – and we all just watched it from outside

We dozily dragged our bodies through the corridor, still drunk, barefoot and wearing nothing but pyjamas as we waited outside in the hopes we’d return to our beds at any minute.

But we never did.

What started as a small fire in the pub next door, turned into a blazing inferno which engulfed our entire hostel.

We stood and watched outside, helpless as everything we’d owned burned down in front of our eyes. Clothes, memories, laptops and suitcases – all completely gone within seconds.

On the farm, we’d all been listening to the podcast about Childers Backpackers some 40 minutes away from us, which was burned down in an arson attack 20 years ago. The devastating tragedy saw 15 backpackers, doing their farm work just like us, lose their lives in an instant.

We were so, so lucky that every single person in our hostel escaped unharmed that night.

It was this incident that encompassed everything about farm work for me; even as everything burned down in front of us, everyone cracked on and tried to make light of a horrific situation.

And that’s exactly what farm work is – an awful situation made incredible by the people you meet along the way. 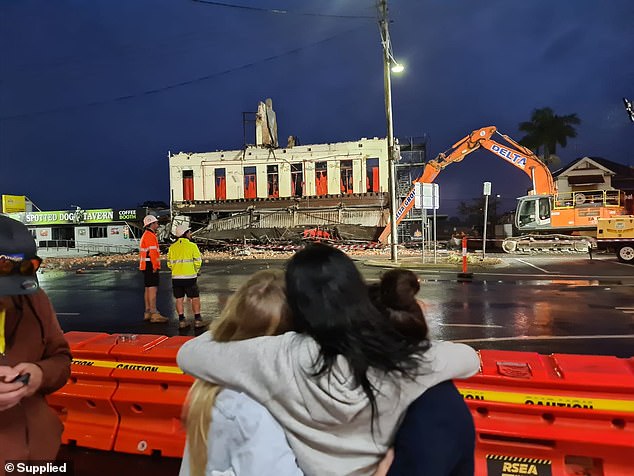 Devastated: Myself (left) and friends Nuala (centre) and Ro (right) watched as our home was demolished, with everything we owned inside

I’m not going to lie –  the outrageous parties, stories of bunk-bed hopping and never-ending supply of drinks is all true. The whole experience is absolutely unforgettable, and I have zero regrets about doing a minute of farm work – even with the hostel burning down.

However, if Mr McCormack wants to incentivise more people to sign up to regional work, there should be more than just the hope of ‘romance’ and cute Instagram snaps on the cards.

Piece rate should be regulated; no one should have to work hours on end in a scorching hot field for literal pennies.

Farms should be more regulated. If someone smacked someone in London for not doing their job properly, they’d be locked up. Why it’s any different for backpackers is unbelievable.

We came out of this process having the utmost respect for those who work in the sector, and I know that so many do this worldwide without complaint.

But if workers were treated with a little more respect, it wouldn’t be such a battle to fill these positions.

For me and my friends, Bundaberg was one hell of a ride – two of us even got the most horrific tattoos known to man to commemorate the whole experience.

But would I do six months of fruit picking to get a third year in Australia?

Never in a million years. 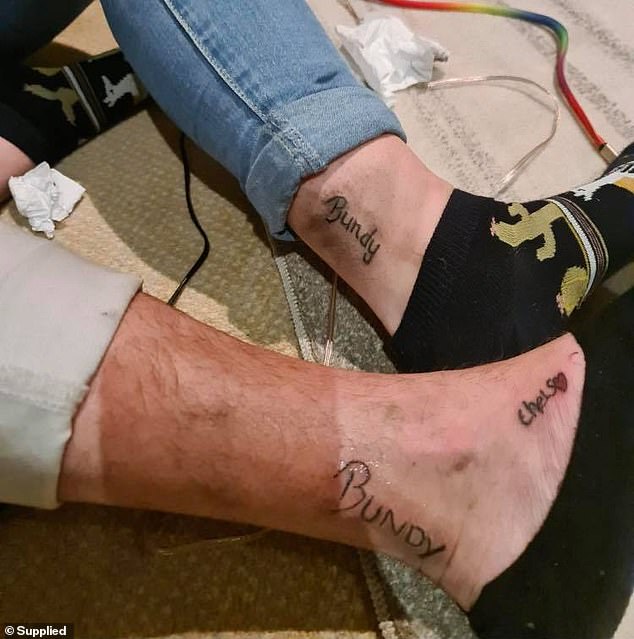 Horrific: Two of us even got two of the worst tattoos in the entire word inked on us, to commemorate the bizarre few months