The photographer who took pictures of children carrying teddy bears wearing S&M gear for Balenciaga’s new adverts has said that the kids who modeled for him were children of Balenciaga employees – who were present when the photos were taken.

Italian documentary photographer Gabriele Galimberti, 45, has insisted he did not think the images he took were disturbing – despite receiving death threats and being called a pedophile when the photos were published.

He has received a torrent of abuse since the campaign was unveiled last month.

Galimberti, whose work has been featured in National Geographic, Le Monde and Marie Claire, said that he was shocked by the virulent response, but stressed that he had nothing to do with styling the shoot or selecting the theme.

‘I can recognize if we are going too far or not, but in that occasion I trust them and I didn’t see anything so wrong,’ he told The Guardian.

Gabriele Galimberti, 45, took photos of children with teddy bears in S&M gear for Balenciaga’s campaign. He said he had nothing to do with the styling, and the parents of the children said the bears were punk and did not object to the shoot 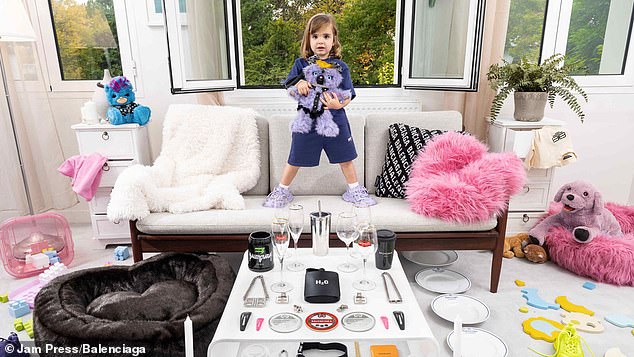 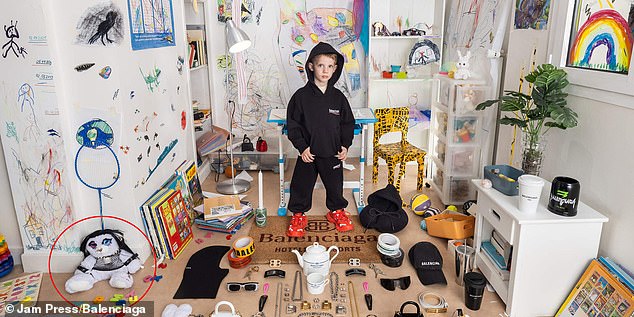 The teddy bears (circled left) were wearing S&M harnesses. The parents of the children said they thought the bears were dressed in punk clothes 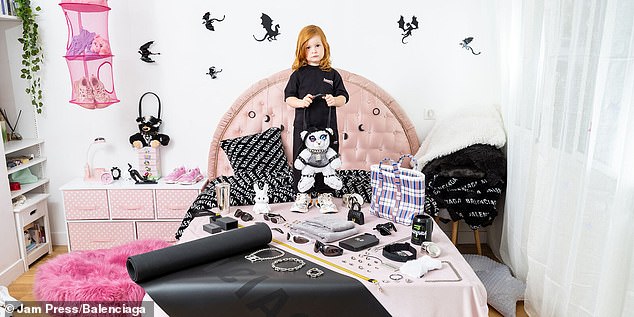 The Tuscany-based photographer said the children’s parents were on set, and did not object to the photos

He said the children in the photos were the offspring of Balenciaga employees, who accompanied them to the shoot and did not raise any concerns.

‘When they saw those bags, everybody was telling them they were punk,’ he said.

The Tuscany-based photographer said he lit the scene, and then using mannequins took photos which were downloaded immediately to a computer and approved remotely.

He has no idea who was approving them. He said that when the lighting and styling was agreed on, the mannequins were then swapped for the children.

‘I’m a documentary photographer. I photograph what I find there,’ he said.

‘For me, if the room is red or yellow, it doesn’t make any difference.’ 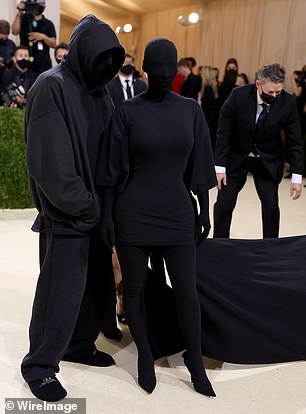 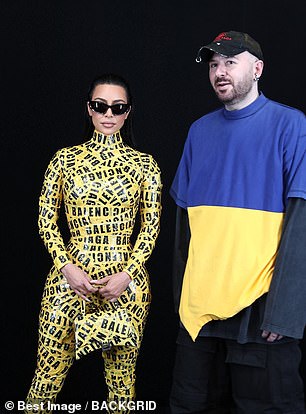 Demna with Kim Kardashian at the 2021 Met Gala. The 41-year-old Georgian native has been credited with boosting Balenciaga’s profits by partnering with stars like Kardashians 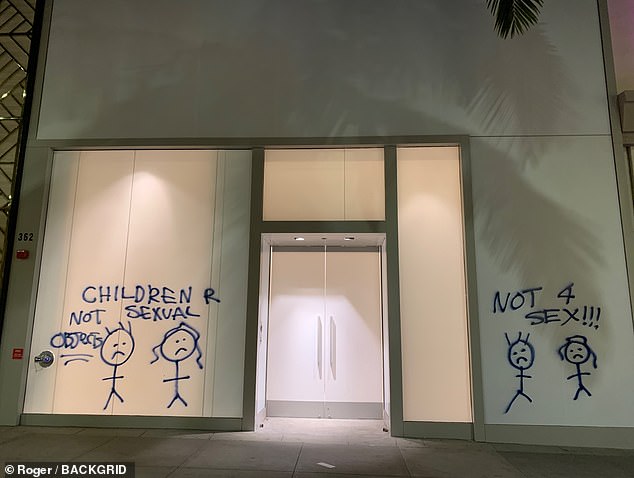 Vandalism on an empty store on Rodeo Drive last month in a clear protest against the brand, whose own store is nearby 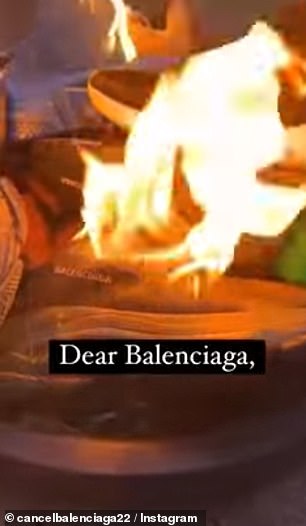 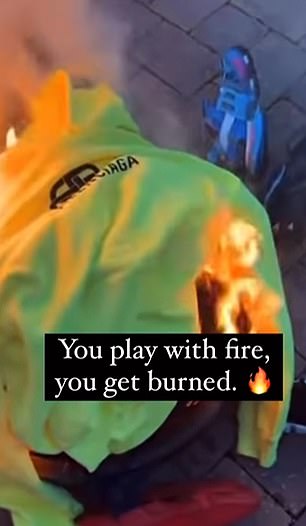 Meanwhile on social media, disenchanted consumers are burning their Balenciaga goods in protest

Galimberti said he had received death threats, and felt that Balenciaga was slow to take responsibility for the shoot – instead allowing him to take the blame.

‘I get messages like ‘we know where you live’, ‘we are coming to kill you and your family’, ‘we are going to burn your house’, ‘you have to kill yourself, f***ing pedophile’,’ he said – adding that 90 percent of the abuse came from people in the United States.

Galimberti worked on the images of children holding teddy bears in bondage gear, and not the Adidas x Balenciaga campaign featuring a handbag on top of documents detailing a court case about child pornography.

He said the photos have been shared together, with people assuming he took both sets.

He is suing four media outlets for falsely suggesting he was involved in the child pornography court case shoot. 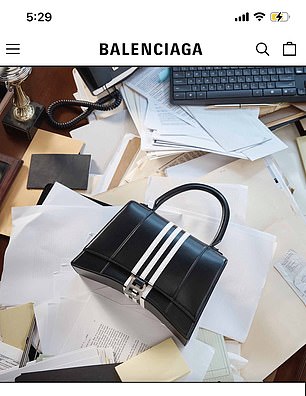 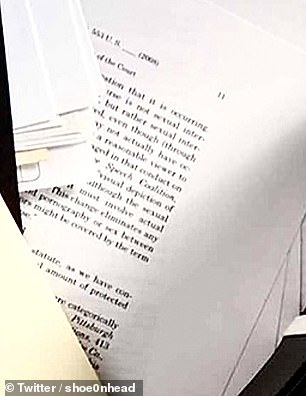 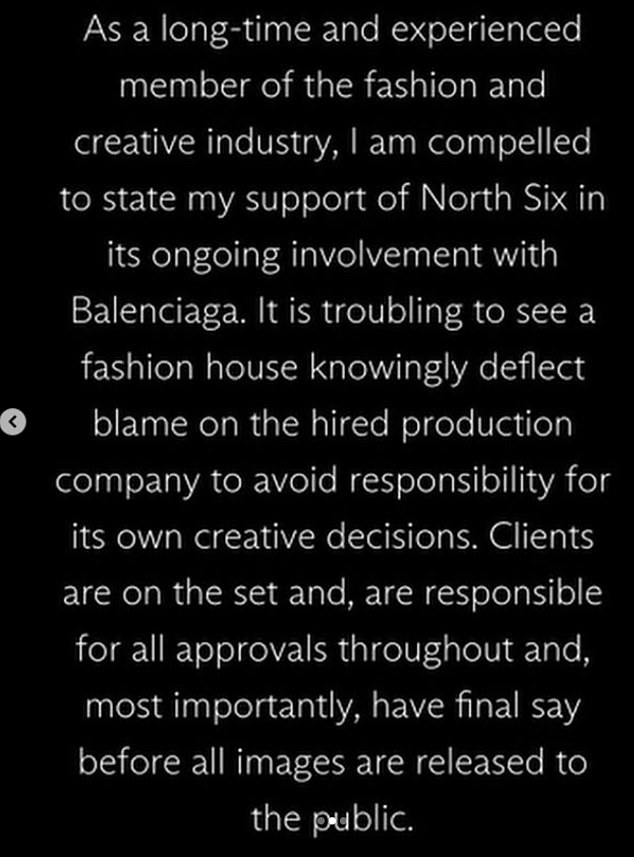 Fashion insiders have expressed their disgust with Balenciaga for trying to blame part of the scandal on North Six, a production company that was involved in the photoshoot 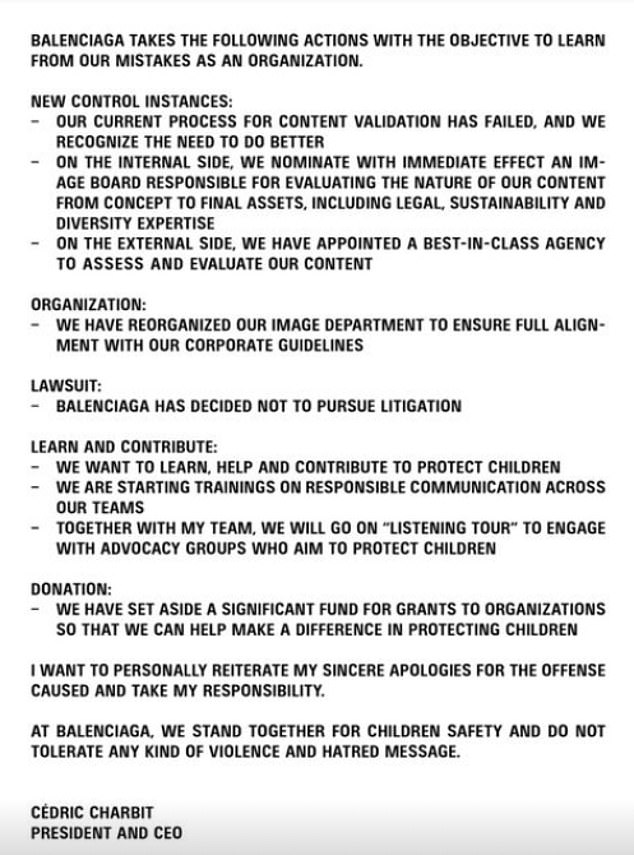 Balenciaga and their creative director, Demna, who does not use a surname, apologized last week – an apology which Galimberti said was slow coming.

‘I was writing [Balenciaga] emails every day – two or three or four emails per day – telling them, ‘guys, people are looking for me. They say that they want to come here and kill me. Please do something. Write a new statement.’

He said Balenciaga suggested he set his Instagram account to private in order to limit the messages.

Galimberti said that the shoot was his first for a fashion campaign, and he took the job because the fee was 20 times what he would be paid for documentary work.

He has now lost work, he said, including a project with National Geographic and an exhibition.

He caught the eye of Demna for Toy Stories, a series of images of children surrounded by their toys.

Another project, The Ameriguns, released in 2020, photographed Americans across the US with their personal firearms.

‘[The Balenciaga campaign] is not the first time that I was under a s*** storm,’ he said.

‘That time people were accusing me of being a crazy Democrat that hates guns and so I was ready to defend myself from that accusation. I can say, ‘Yes, I’m against guns.’

‘But when you are accused to be a pedophile? How can you defend yourself?’

Galimberti last month took to Instagram to try and explain what had happened.

He wrote: ‘Following the hundreds of hate mails and messages I received as a result of the photos I took for the Balenciaga campaign, I feel compelled to make this statement.

‘I am not in a position to comment Balenciaga’s choices, but I must stress that I was not entitled in whatsoever manner to neither chose the products, nor the models, nor the combination of the same.’ 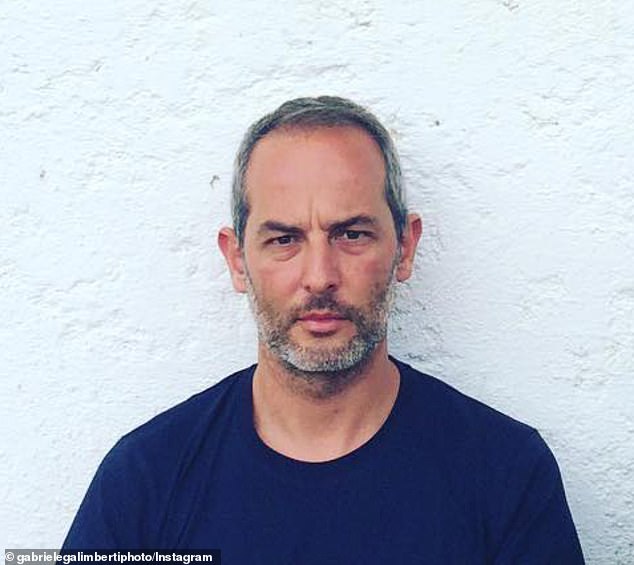 Galimberti said that it was his first fashion shoot, which he accepted because the fee was 20 times higher than for his usual documentary work 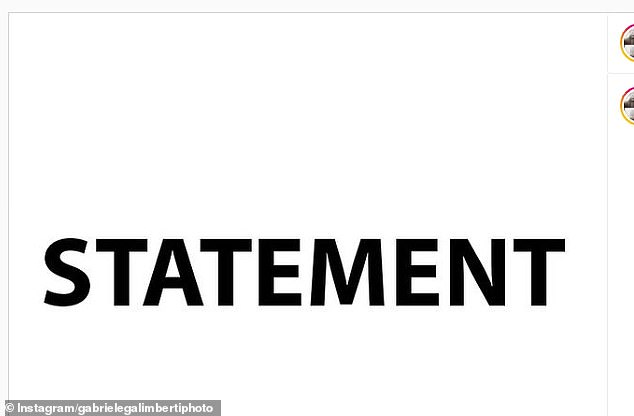 It was not to advertise a line of children’s wear or accessories.

Almost immediately, there was uproar among mothers and consumers who called out the impropriety of the children being involved.

Critics said the two issues combined pointed to a pattern at the brand – an allegation it strongly denies.

Then, a closer look at that July photoshoot revealed a book in the background by artist Michael Borremans, whose other works include depictions of naked, castrated toddlers.

Instead, it says production company North Six and set designer Nicholas Des Jardins is to blame for those props making their way into the photoshoot.

But a source with knowledge of the photoshoot in Manhattan told DailyMail.com that no one from North Six was even present when the documents were placed in the frame behind a handbag.

‘Balenciaga wanted to keep it a closed set. North six staffers were not there for the final staging of those document photos,’ they said.

The only people present in the end were ‘two Balenciaga staffers, the photographer and a set assistant’.

It’s not uncommon for brands to limit the number of unessential staff allowed to be present at shoots involving high profile models.

In this case, Bella Hadid was the star of the campaign Balenciaga x Adidas campaign, and Nicole Kidman was also photographed for the ready-to-wear collection.

In the photo shoot, the kids also appeared surrounded by empty wine and champagne glasses.

The distinctly adult themes immediately troubled many who asked why children had ever been used.

Balenciaga ignored the scandal at first and seemingly allowed the photographer who was involved, Gabriele Galimberti, to take the heat.

He released a statement saying he had no control over the content of the shoot and eventually, Balenciaga released its own statement agreeing with him and taking responsibility for the campaign.

It has now been pulled from the internet.

On the back of the bears scandal, many critics said it pointed to a troubling pattern within Balenciaga.

Balenciaga was quick to blame North Six, a production company that helped arrange the shoot, for the inclusion of those documents.

They claimed that they entrusted all of the props from the photoshoot to North Six, and that their team was assured everything that was included was fake.

Balenciaga is yet to answer for the inclusion of a book by Michael Borremans in the background of two of the images from the Spring ’23 campaign.

Borremans is a Belgian painter whose work includes a troubling 2017 series called Fire From The Sun.

It depicts naked toddlers – some of them castrated – playing in a group and at times alone.

Lawyers for the brand are yet to address DailyMail.com’s questions about how the book ended up on the photoshoot.

In this image from Balenciaga’s scrapped Spring ’23 campaign, Isabelle Huppert sits in front of a stack of books including one that celebrates Michael Borremans, a Belgian painter whose work is known to include depictions of castrated toddlers

Borremans’ other work includes his 2017 series Fire From The Sun, which features castrated toddlers and babies holding what look like severed limbs, while playing together nude in a large group