An uncle was filmed tickling the feet of his wife’s teenage niece two weeks before allegedly murdering her in a sexually-motivated attack then setting her body on fire.

Shane Mays, 30, allegedly walked schoolgirl Louise Smith, 16, to woodland a mile from her home in Havant, Hampshire, where he killed her and dumped her body.

Louise went missing on VE Day in May, sparking a huge search. Her body was found by police in a country park 13 days later, a mile and a half from Mays’ flat.

Mays was arrested after her body was discovered and went on trial at Winchester Crown Court today for murder, having yesterday pleaded guilty to manslaughter.

The girl had been living with Mays and his wife, Chazlynn Jayne Mays, known as CJ Mays, 29, who was the cousin of Louise’s mother as well as the victim’s aunt.

The court was told Louise’s badly burned body was found ‘damaged and defiled’ in the woodland by two police officers – and her central facial skeleton was ‘shattered’ caused by ‘repeated blows from a heavy object’, possibly a large branch.

A pathologist could not say which of Louise’s injuries caused her death because of the damage caused by the fire – and a post mortem failed to return a cause of death.

The court also heard it was possible Mays had returned to the scene to burn the body. The jury were told photographs of Louise’s body were ‘too distressing to view’.

Today, jurors were shown a Snapchat video of Mays looking through Louise’s knees and tickling her on April 26, and were told he had ‘playfights’ with her. 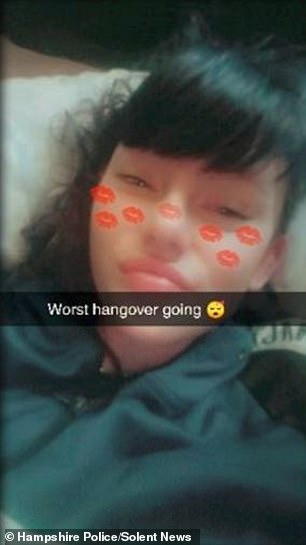 Louise posted these two images of herself on Snapchat, with the one on the right believed to be the last ever picture of her 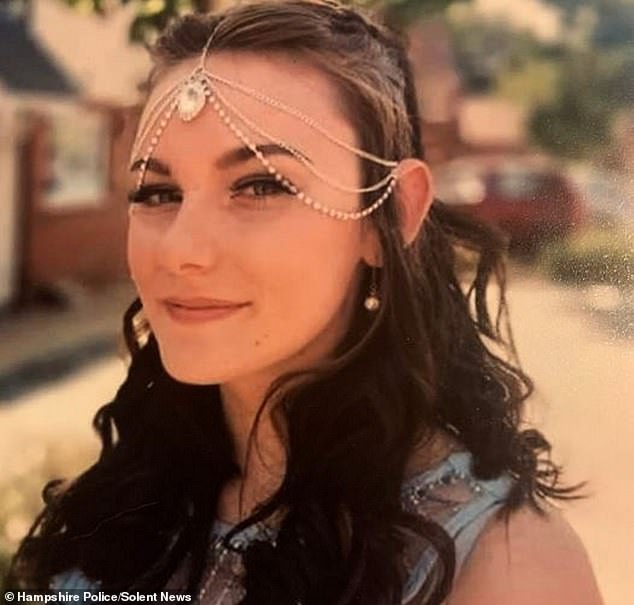 Louise Smith went missing on VE Day in May, sparking a huge search. The body of the 16-year-old girl was found by police 13 days later in a country park in Havant, Hampshire

Her boyfriend allegedly claimed that Mays ‘flirted’ with Louise by putting his arm around her and ‘pinning her down’, the court was told.

Louise’s relationship with CJ and Mays later soured as she ‘had enough of being there’ following arguments over her boyfriend and allegedly smoking cannabis.

Shane Mays went out to buy pizza just hours after allegedly killing Louise while his wife frantically tried to locate the missing teenager, the court heard.

He also made ‘surprising’ comments about locking her in her bedroom when she came home and tried to ‘deflect’ police attention onto her young boyfriend, it was heard today.

Prosecutor James Newton-Price QC said there was ‘ominous’ signs after Louise’s disappearance in the early afternoon of May 8.

He said there was no social media connection or phone data activity between 1pm and 3pm and that her 16 year old boyfriend arrived at the Mays flat to meet her for the agreed time of 3pm.

Her worried aunt CJ ‘frantically’ called her to try to find her and her boyfriend went out searching for her – but the court heard Mays ‘went out to buy pizzas’.

Mr Newton-Price QC said: ‘He’s at home all those times his wife is phoning Louise to find out where she is, and obviously he didn’t want to tell her.

‘So what he did, is go out and buy pizzas.

‘He had with him four pizzas – he knew Louise was dead at this time.’

It was heard Mays complained ‘Lou took the piss’, telling his wife and Louise’s boyfriend that he had apparently walked her to Emsworth skate park.

Mr Newton-Price QC added: ‘Louise’s boyfriend was worried about her. He called a friend and they went to Emsworth skate park to search.

‘[Louise’s boyfriend] later told police that Emsworth skate park was a ‘long old distance’. To him, the idea that Mays had walked there, in his words ‘didn’t fit together in my head’.

‘He was worried that her phone seemed to be off, ‘what’s she doing, why is her phone off? Her phone is usually always on, she always answers it’.

‘He could not work out why Louise was not there when she knew he was coming to see her that afternoon.’

At 6.32pm, six and a half hours since Louise left the flat, CJ phoned police and ‘did all the talking’.

Over the course of the next few days, police repeatedly visited the Mays flat as they investigated what at that stage was believed to be a missing person.

‘He barely said a word… (an officer) asked how he got on with Louise, he said they had a good relationship but that she contacted boys a lot on social media.

‘He said that he would lock Louise in the bedroom if she returned. He asked if it was OK to restrain her.

‘(The officer) advised it would be better to simply let the police know as soon as she returned.’

Mr Newton-Price QC said Mays tried to ‘deflect police attention’ onto Louise’s boyfriend by bringing up an argument he had with the teenager.

He also said he ‘lied’ during police interviews and ‘knew the Thicket’ well because he camped there regularly as a teenager.

James Newton-Price QC, prosecuting, told the court today that Louise sent a friend  a picture of her crying on Snapchat as relations soured with Mays and CJ.

Mr Newton-Price said Louise stated ‘clearly’ in messages to friends that she wanted to move out, telling one: ‘I can’t live here anymore… Long story, they are just vile.’

Louise told one friend she was ‘treated like a child’ by Mays and CJ. While her boyfriend was round, he allegedly witnessed Mays flirting with her.

Mr Newton-Price QC said: ‘Louise had spoken to [the boyfriend] about Mays flirting with her. In his words he said ‘like he’d put his arm around her and he’d tickle her and pin her down and things like that’.’

Mr Newton-Price QC also told the trial: ‘Louise disappeared sometime after 12.49pm on May 8, that was the last time of her last outgoing contact with her phone.

‘Her auntie frantically tried to contact Louise by phone from about 3pm when Louise failed to come home as expected. CJ eventually reported Louise missing at 6.32pm. Louise did not come home that night or ever again.’

Louise moved into Mays’ flat which he shared with CJ following a ‘quarrel’ with her mother, Rebecca Cooper, in April.

Louise had initially got on well with CJ and Mays and messaged CJ, saying: ‘I wish you and Shane was my parents, maybe then I wouldn’t be the way I have been recently.

‘I want to start calling you guys mum and dad but I don’t wanna make Shane feel uncomfortable.’

On the night before her death, she was ‘drinking heavily’ and told friends she ‘passed out’ and even contacted a mental health hotline.

She told the hotline: ‘I suffer from anxiety and depression, it sucks but I make it through every day somehow but… can’t cope as much… I can’t help it I have started self-harming again I can’t cope.’

On VE Day on May 8 earlier this year, Mays allegedly led the ‘vulnerable and impressionable’ college student to woodland site Havant Thicket and murdered her.

He even stopped in at his mother’s house on the way back while he was ‘sweaty and thirsty’ and later ‘lied’ to police by telling them he walked her to a skate park three miles away, the court was told.

Mr Newton-Price QC said Mays has ‘changed his story’ by now admitting manslaughter, having originally told police he knew nothing about her death.

He said: ‘The prosecution submits this is a cruel and brutal murder.

‘A determined attempt had been made to destroy her body, which was so badly burned and damaged by fire as to be unrecognisable.

‘Her body has been subjected to extreme violence and violation, including repeated and heavy blows to her head.

‘The bones and the structure of her face had been shattered. Her jawbone was completely detached from her skull.

‘Her body had also been penetrated in a terrible way… there are grounds to believe that part of the motivation for her murder was sexual.’

He said: ‘Mays told police that he had walked Louise to a recreation ground or skate park. He said he left her there in the early afternoon that day. That was a lie.

‘In fact, Mays and Louise walked to Havant Thicket and Mays killed her there. He took her mobile phone and threw it into the woods as he left the scene of the killing. 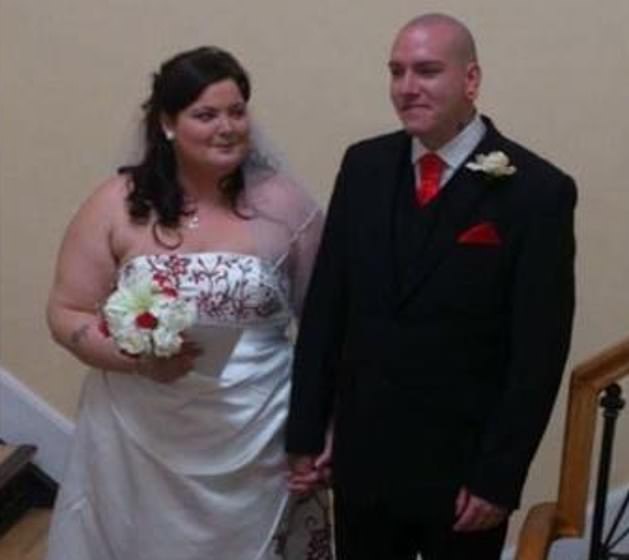 Louise had been living with Shane Mays (right) and his wife, Chazlynn Jayne Mays (left), known as CJ Mays, 29, who was the cousin of Louise’s mother as well as the victim’s aunt 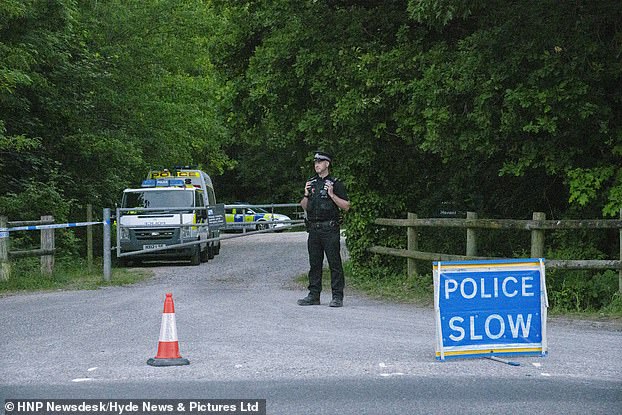 Police officers at the area of woodland in Havant, Hampshire, during their investigation in May

‘He called in fact on his mother shortly after killing Louise. It was a warm day, he was sweaty and he was thirsty, he told his mother the lie about having just walked Louise to a skate park almost three miles away.

‘Mays was to repeat and elaborate on this same lie to his wife and to Louise’s boyfriend later that day. He told the same lie to police in great detail.’

Friends of Louise, whose body was found on May 21, said she was ‘easily led’ and ‘vulnerable to peer pressure’.

Mr Newton-Price QC said: ‘Louise was a vulnerable child. She took anti-depressants and occasionally self-harmed. She lacked self-confidence and she suffered from the anxiety issues that affect some teenagers.

‘Louise wanted to assert her independence but we submit she was vulnerable and impressionable.’

Jurors were shown CCTV of Louise’s last known sightings, as she walked through Havant with Mays on the day before her death.

The court was told Mays had learning difficulties. He denies murder but admits manslaughter. The trial continues.