The strongest hurricane on record to make landfall in May in the eastern Pacific swept ashore on a stretch of tourist beaches and fishing towns in southern Mexico on Monday.

Torrential rains and howling winds from Hurricane Agatha whipped palm trees and drove tourists and residents into shelters in a region that is sparsely populated except for a handful of small communities along the shore.

Oaxaca state’s civil defense agency showed families hustling into a shelter in Pochutla and a rock and mud slide that blocked the highway between that town and the state capital.

Agatha made landfall about 5 miles west of Puerto Angel as a strong Category 2 storm, with maximum sustained winds of 105 mph. It was moving northeast at 8 mph.

Tourists in Puerto Escondido, Mexico, film the winds and rain of Hurricane Agatha as the storm makes landfall in southern Mexico on Monday 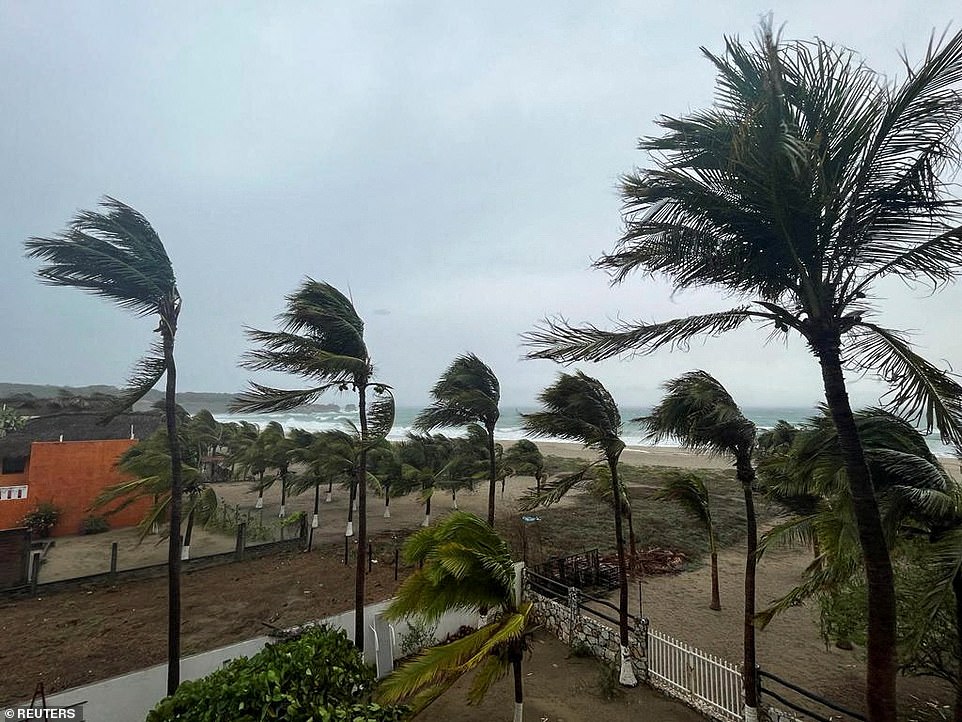 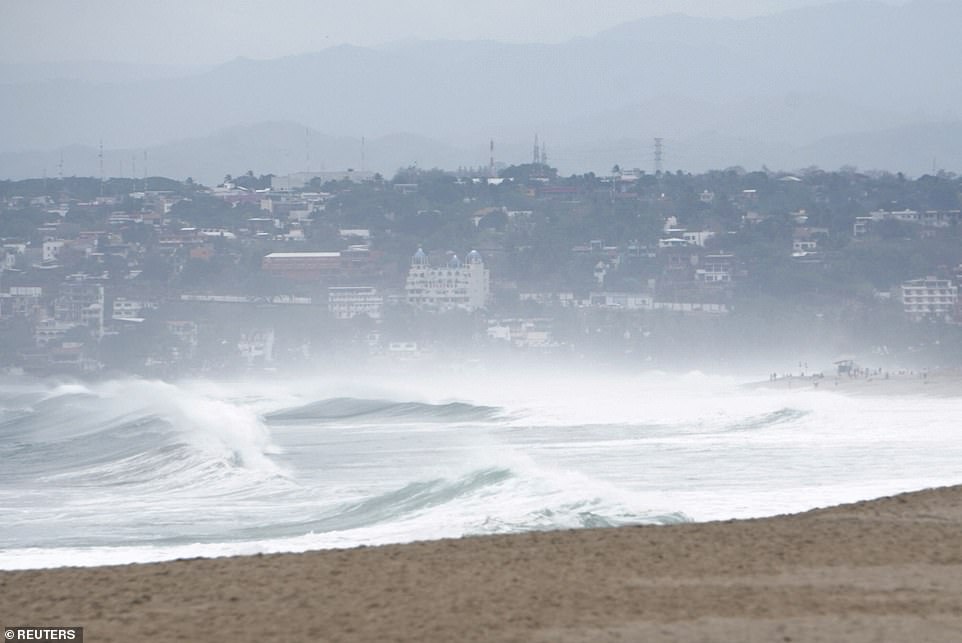 Waves driven by Hurricane Agatha pound the beaches of Puerto Escondido, Mexico. Officials warned that storm surges could be deadly 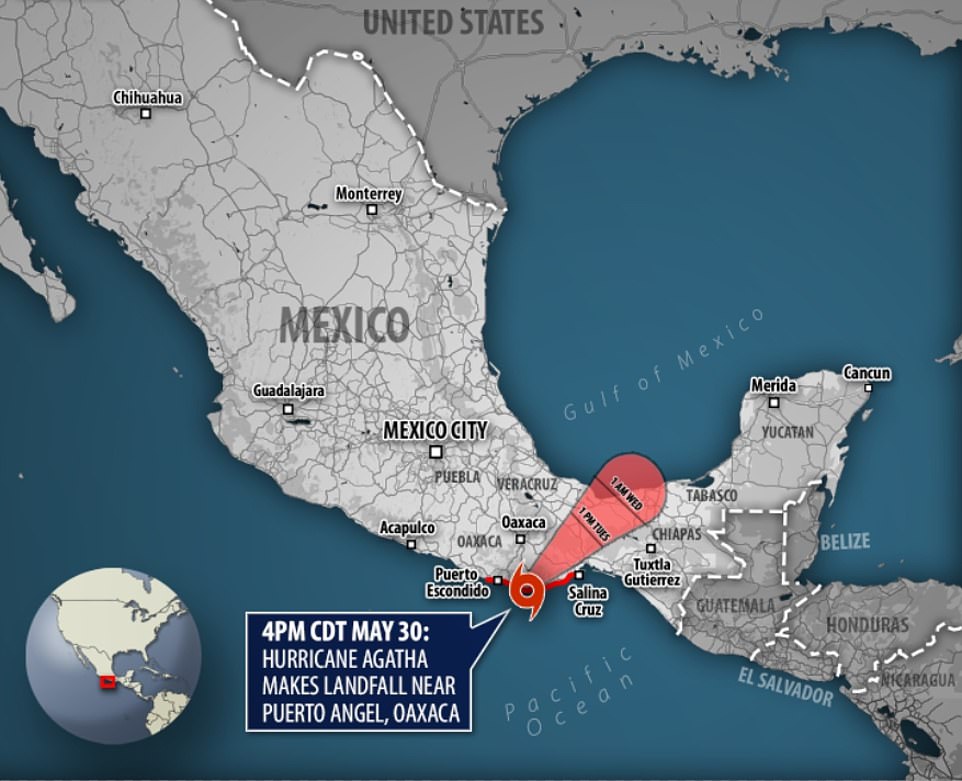 ‘There is a lot of rain and sudden gusts of strong wind,’ said Silvia Ranfagni, manager of Zipolite’s Casa Kalmar hotel. ‘The ocean is really stirred up, and it’s raining a lot,’ said Ranfagni, who has decided to ride out Agatha at the property. ‘You can hear the wind howling.’

National emergency officials said they had assembled a task force of more than 9,300 people for the area and more than 200 shelters were opened as forecasters warned of dangerous storm surge and flooding from heavy rains.

In the surfing town of Puerto Escondido, to the west, people took shelter and finished putting up plywood to prevent windows from breaking in the strong winds.

After forming on Sunday, Agatha quickly gained power, and it made landfall as a strong Category 2 hurricane Monday afternoon, the U.S. National Hurricane Center said.

Agatha is the strongest hurricane on record to make landfall in May in the eastern Pacific, said Jeff Masters, meteorologist with Yale Climate Connections and the founder of Weather Underground. 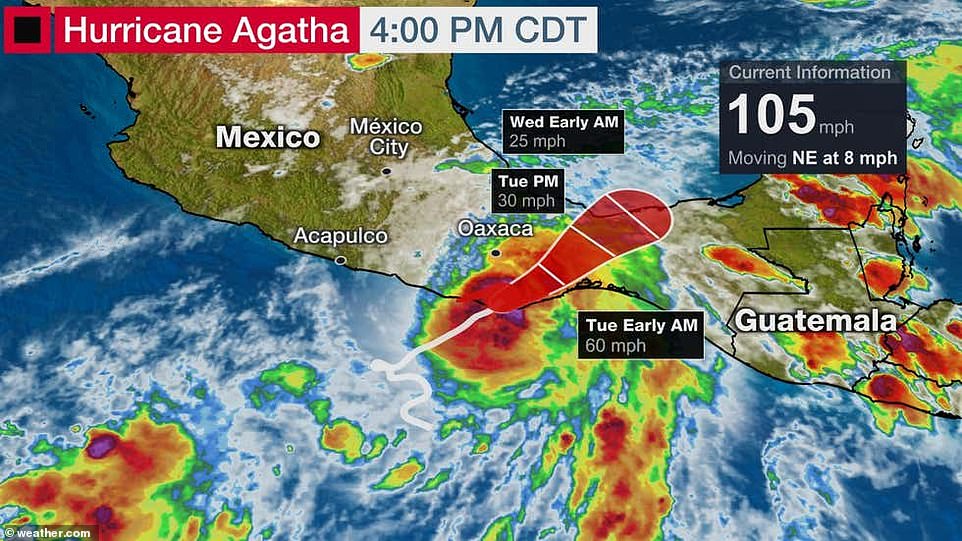 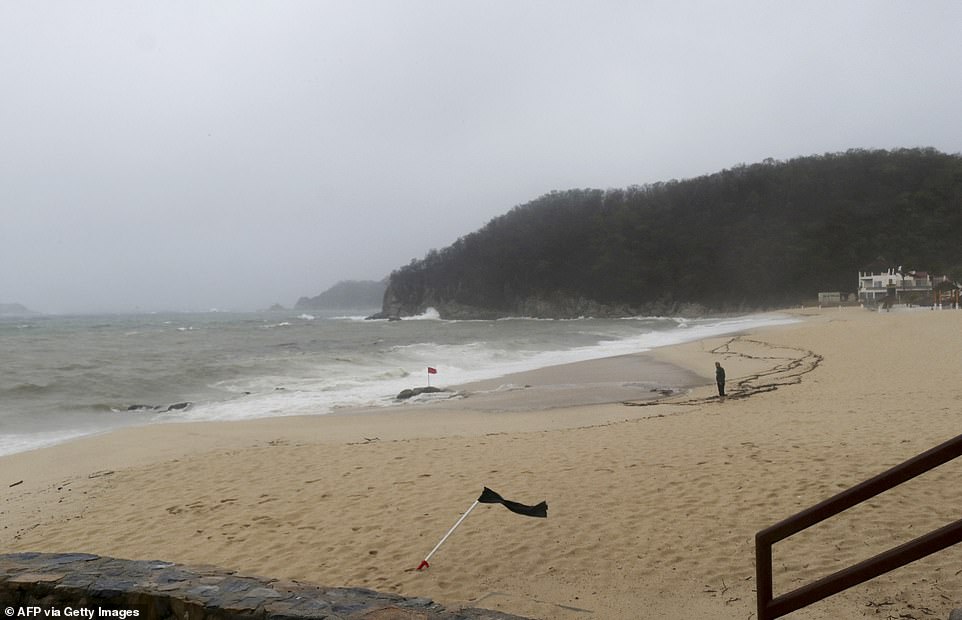 A beach in Huatulco, Mexico, as Hurricane Agatha makes landfall on Monday. The sky turned grey as wind and waves whipped the shoreline 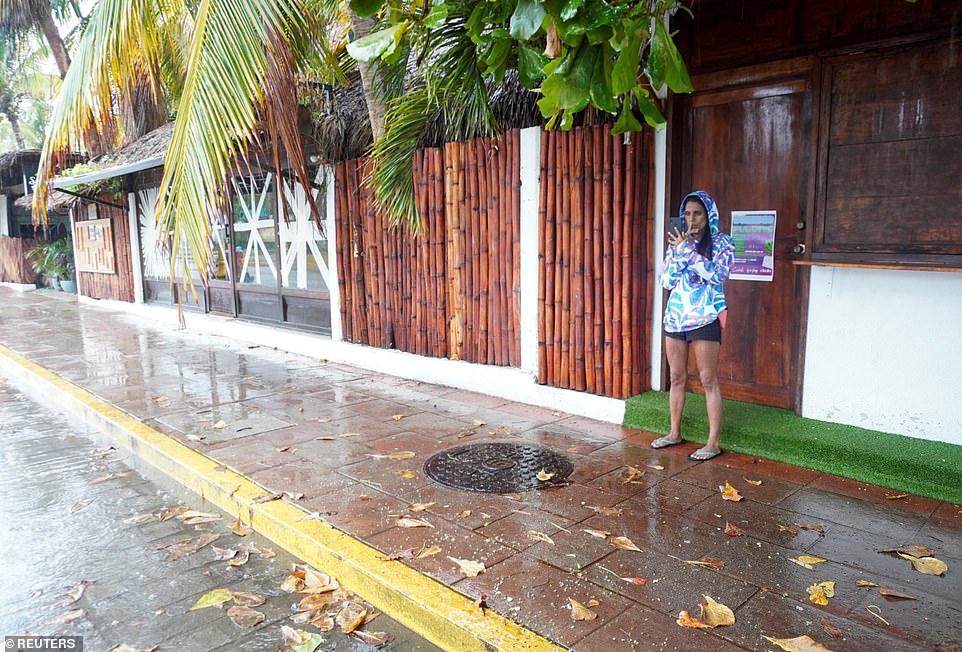 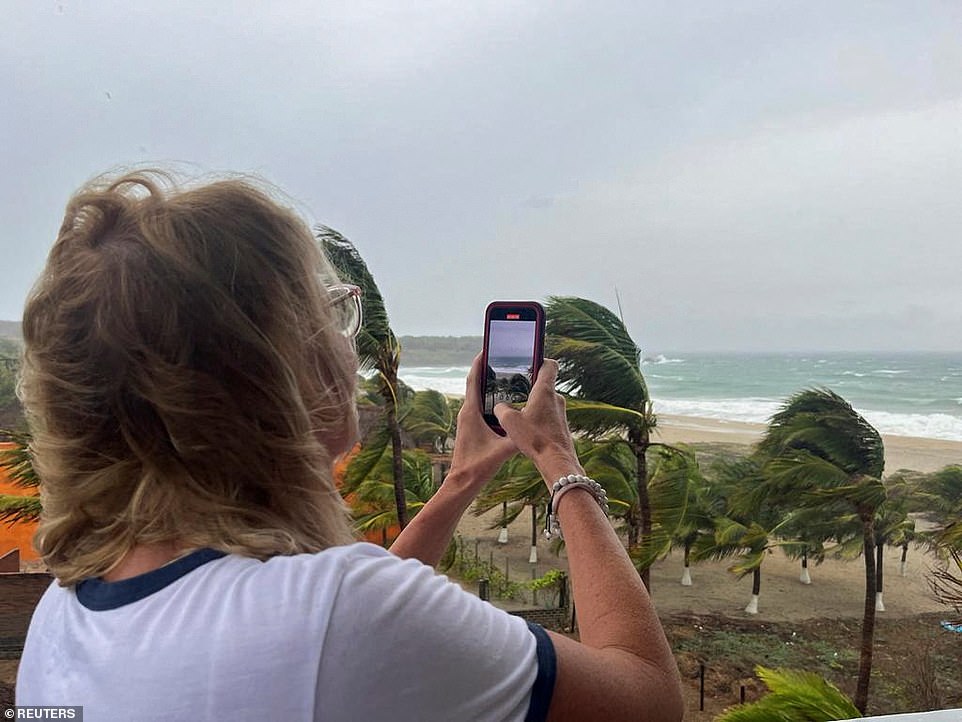 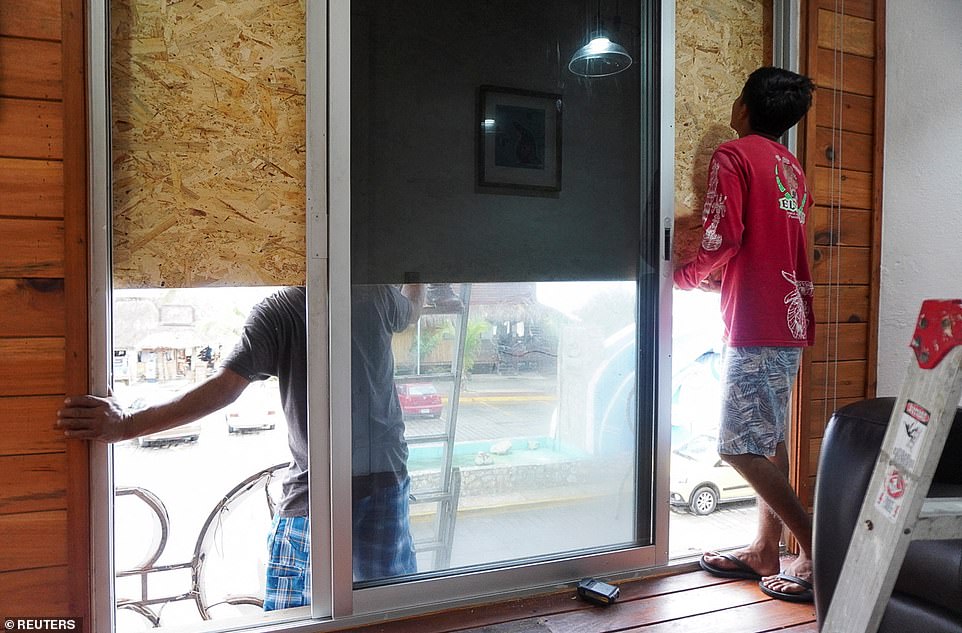 Residents boarding up windows on May 29, a day before Hurricane Agatha slammed into the southern coast of Mexico 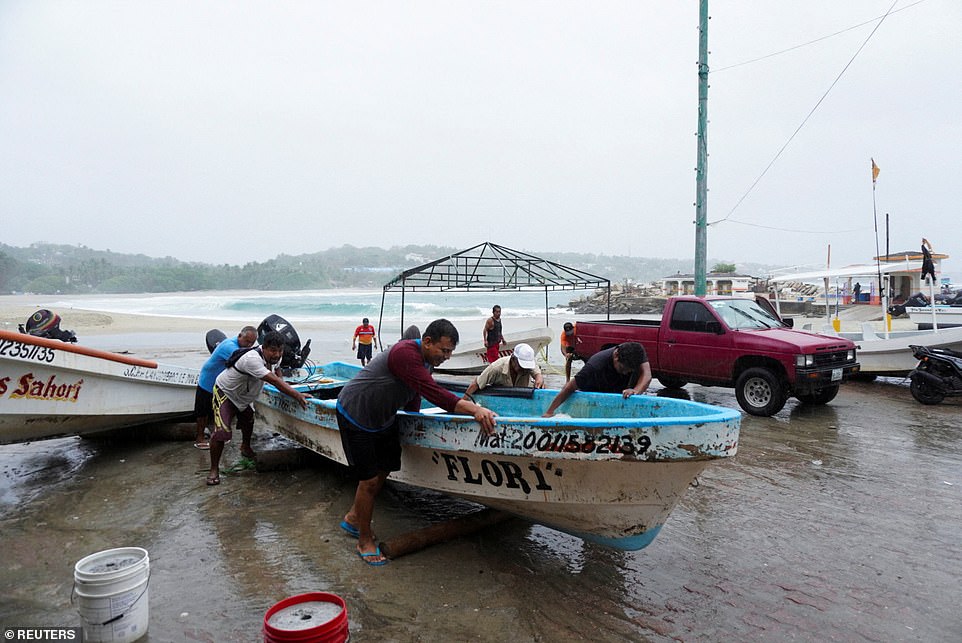 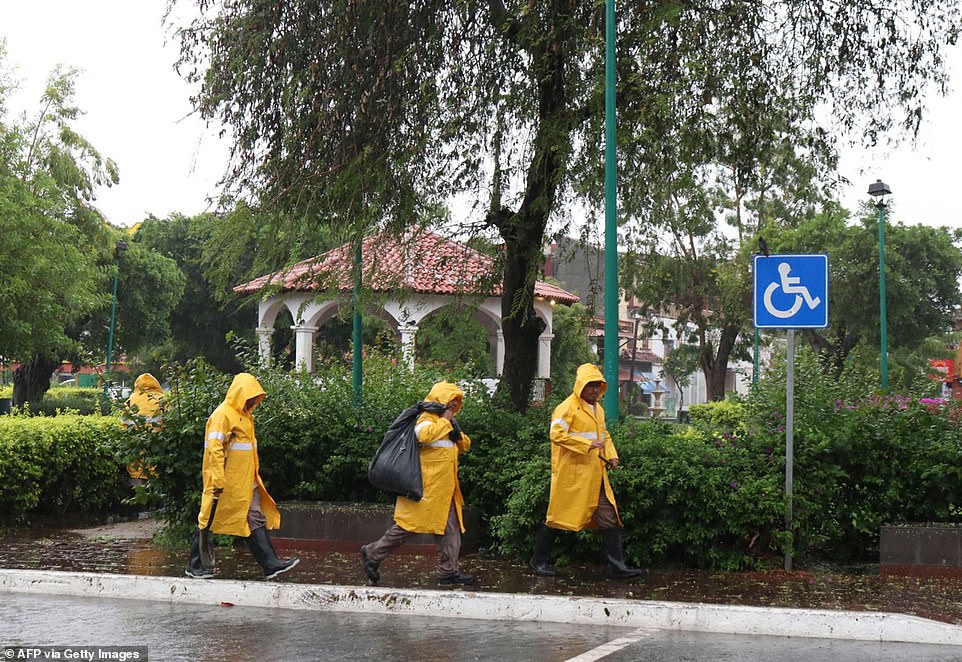 City employees in Huatulco, Mexico, clear the streets of debris before Hurricane Agatha lands in the coastal town on Monday

He said the region’s hurricanes typically get their start from tropical waves coming off the coast of Africa.

‘Since the African monsoon typically does not start producing tropical waves until early- or mid-May, there simply aren’t enough initial disturbances to get many eastern Pacific hurricanes in May,’ Masters wrote in an email. ‘In addition, May water temperatures are cooler than they are at the peak of the season, and wind shear is typically higher.’

Masters was not sure if Agatha was kicked off by a tropical wave – areas of low pressure that move across the tropics – but the storm benefitted from warm waters and low wind shear. 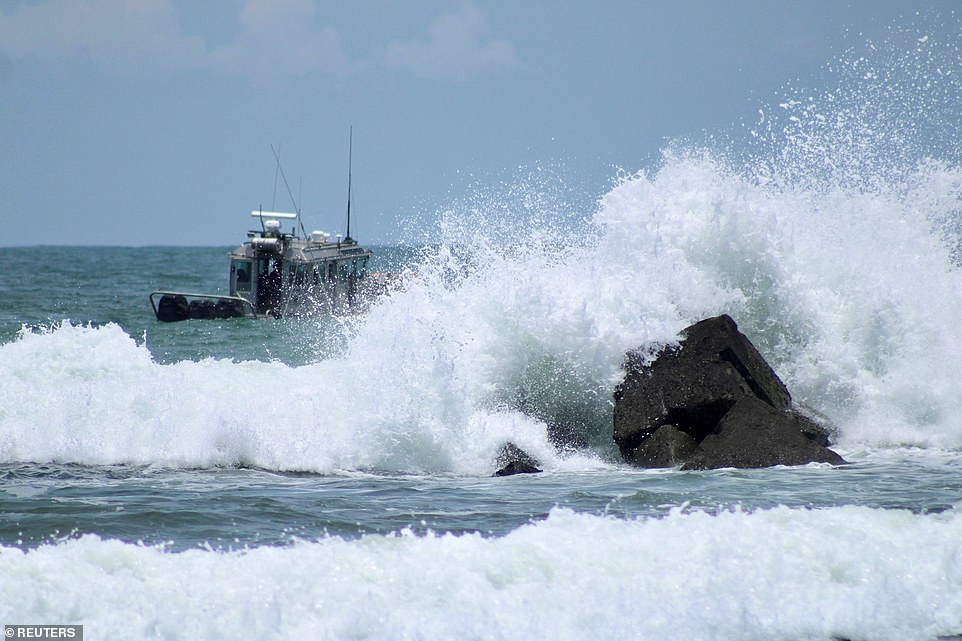 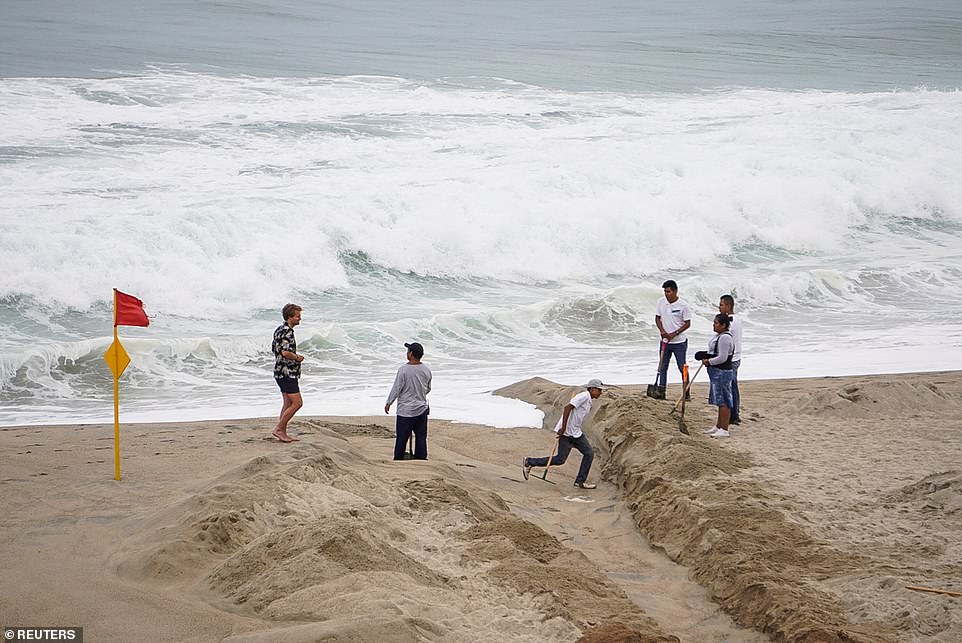 A man talks with workers preparing a Puerto Escondido beach for for the coming storm on May 29. Waves had intensified a day before the hurricane made landfall 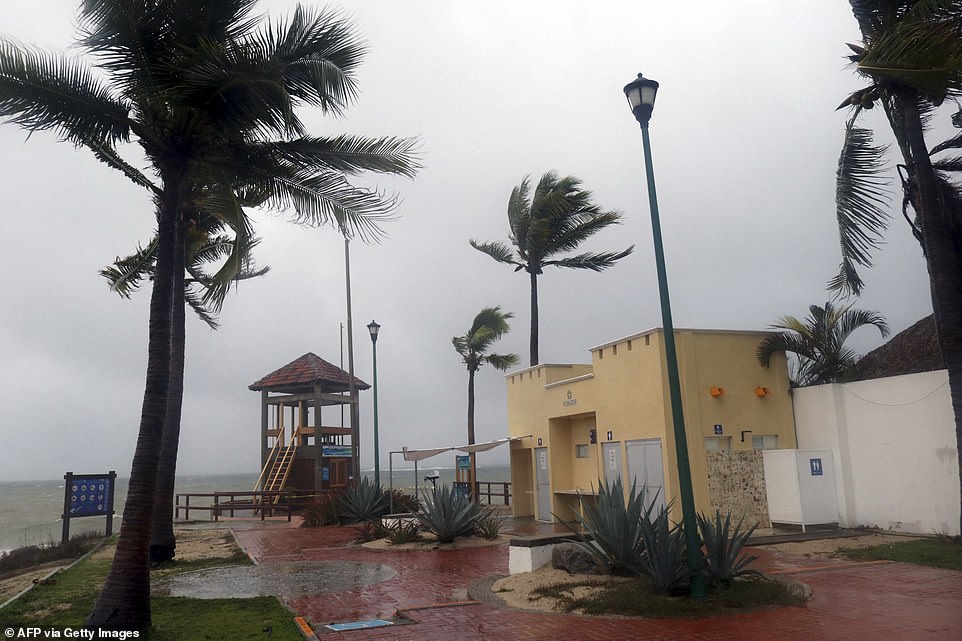 Palm trees whip in the wind as Hurricane Agatha strikes Huatulco, Mexico, on Monday. The town ordered the closure of all its beaches for the storm

The U.S. National Hurricane Center said the storm was expected to drop 10 to 16 inches of rain on parts of Oaxaca, with isolated maximums of 20 inches, posing the threat of flash floods and mudslides.

In Huatulco, municipal authorities had cancelled schools and ordered ‘the absolute closure’ of all beaches and its seven bays, many of which are reachable only by boat.

The government’s Mexican Turtle Center – a former slaughterhouse turned conservation center in Mazunte – announced it was closed to visitors until further notice because of the hurricane.