By Christina Coulter For Dailymail.Com

Police were called to a Tampa trampoline park on Saturday night when a spontaneous brawl broke out between hundreds of children, spilling out into the parking lot and surrounding businesses.

Parent Sandra Bermudez said things ‘escalated very quickly’ – one moment, the children were ‘all having fun,’ but the next, they were scrapping with each other.

‘Then when this lady said, “Oh my God,’ and I turn around to look, they’re fighting on the right side,’ Bermudez told Fox 13.

Bermudez was stunned by the pandemonium, which she begun filming from a vantage point on the second floor after she pulled her 9-year-old son from the roiling mass of children at the Sky Zone on Adamo Drive.

‘I was very worried, I was like, “is my son gonna get trampled on? Is he underneath these big kids?”‘ she told WFLA.

The cluster of out-of-control children can be seen in a parent’s footage of the bizarre, 200-kid fight that broke out at a Tampa SkyZone this weekend 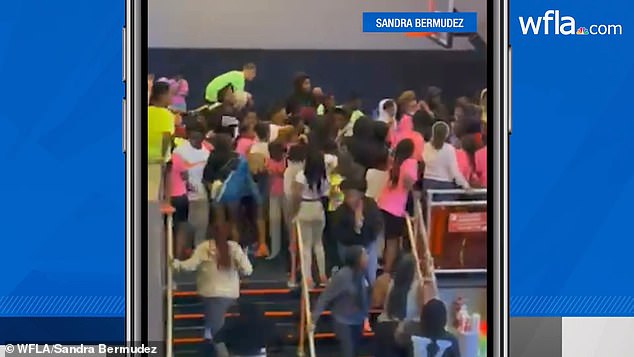 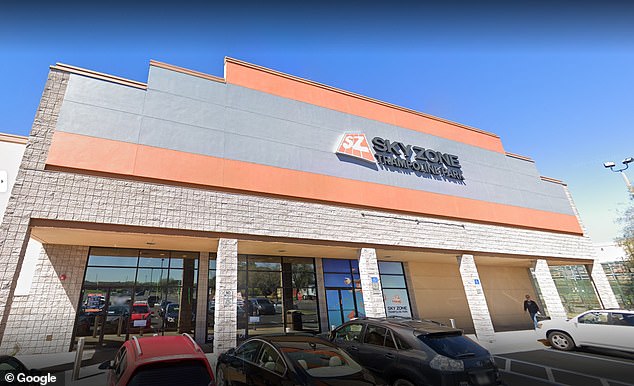 Sky Zone in Tampa (pictured) did not return DailyMail.com’s requests for comment or inquiries about how many employees were on staff or what measures they will take to prevent similar incidents in the future

Bermudez wasn’t sure what started the fight, but things quickly became chaotic.

‘If I wasn’t there, I would want to know what happened,’ she said. ‘Just the sound itself on video, it was very concerning for me as a parent that one of these kids might hurt another.’

Hillsborough County sheriff’s deputies said the brawl involved about 300 kids – mostly teenagers. Although one child was briefly detained and released, none of the cagey kids were arrested.

It’s unclear if anyone was hurt – Bermudez said she was frightened for her small son when the fighting broke out.

‘I tried to use it as an opportunity to teach him if this ever happens in the future, the first thing you need to do is pull yourself away from the crowd.’

She began filming again from her car when the mass of kids spilled outside, only to dissipate when police arrived.  Cops said they tried to track down the parents of the kids involved.

Security guards can be seen attempting to break apart the scrapping children. Sky Zone did not return DailyMail.com’s emails and calls asking how many employees were on staff or what measures they will take to prevent similar incidents in the future.

‘I think a plan, perhaps would need to be in place as to how many kids could be there, whether the parents are required to stay there or not,’ said Bermudez. ‘I think that they weren’t really prepared for it. I would have liked to see more adult presence other than just a few security guards.’