Hundreds of ex-pupils accuse £40,000-a-year girls’ school of racism after it promoted its new flower garden instead of acknowledging US race protests

A top girls’ school has been engulfed by hundreds of allegations of racism from former students.

St Mary’s Calne School in Wiltshire, which is ranked among the best independent schools in the country, received an outpouring of angry messages from former pupils after posting a seemingly innocuous picture of its new flower garden online.

Cat Roberts, 22, who is mixed-race, questioned the boarding school’s decision to share the image when it had failed to comment on the global discussion on racism sparked by the death of George Floyd.

St Mary’s Calne School in Wiltshire, which is ranked among the best independent schools in the country, received an outpouring of angry messages from former pupils after posting a seemingly innocuous picture of its new flower garden (pictured) online

She said: ‘With all that is happening in the world at the moment, I don’t think it is appropriate that you are posting your new flower garden yet are not acknowledging black lives and your black students.

‘It is truly ignorant that as a school you will not publicly stand for your black students. Racism is alive and is something myself and my friends experienced whilst studying at St Mary’s Calne.’ 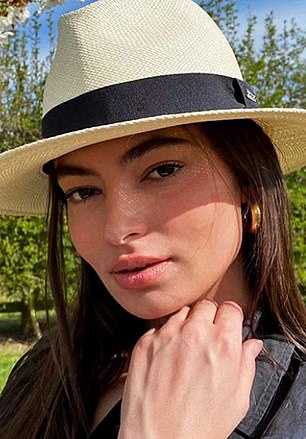 Cat Roberts, 22, (pictured) who is mixed-race, questioned the boarding school’s decision to share the image when it had failed to comment on the global discussion on racism sparked by the death of George Floyd.

Miss Roberts’s comment triggered a wave of responses from almost 400 former and current pupils, many recounting experiences of alleged racism at the school.

One student at the school, which charges fees of up to £13,295 a term, said the ‘ability for staff to overlook blatant ignorance and racism is quite mind-boggling’.

Another wrote: ‘You happily collected £30,000-plus from us each year, with no care to ensure we were welcome, cared for and afforded the same opportunities as our white counterparts. There is a reason your black alumni walk out of the door and never look back. You too have been complicit in years of institutional and systemic racism.’

One pupil alleged: ‘There was a recurring use of the “N word” casually used in class by teachers especially. I also remember a particular teacher showing a seven-minute-long video of black girls and boys getting lynched and hung. It was traumatic.’

The school, which says it has no record of such an incident, disabled the comments beneath the post before deleting it entirely. Former pupils have now written to the school’s governors to complain.

A draft of the letter says: ‘Throughout our time in Calne, we quickly learnt to internalise the sad truth, which is that when it really comes down to it, we were treated differently and our opinion was less valued in your eyes.

‘From our experience, a student’s wellbeing was generally not prioritised over the school’s image.’

The letter calls for a meeting between former pupils and the school to ‘discuss and implement how to ensure there’s change moving forward’.

In a statement on the school’s website, headmistress Dr Felicia Kirk said: ‘I am not innocent enough to believe that it never happens, and I am deeply saddened to read about the experiences of some Calne girls.

‘Just as I am passionate about the need for change in the US, I am also committed to making sure that we deal effectively and with the utmost seriousness, with any instances of racist behaviour in the school.’

But Ms Roberts, who works as a model after studying public relations at university, said the statement was ‘pathetic’, adding: ‘I’m a very privileged person, as are all of my peers. But what I’ve realised from this situation is that just because you’re privileged doesn’t mean you’re exempt from racism.’

Last night, Dr Kirk said a recent survey of alumnae showed they had ‘overwhelmingly positive memories of the school and there was no mention of racism’. She added: ‘We are proud of our diverse, multi-faith, multi-racial school community and would never allow racism to go unchecked and unpunished.’