Hundreds of Falkland Islands residents have rushed to beaches over the weekend after they were finally declared free of landmines almost four decades after the end of the Falklands War.

The final mines left by Argentine forces on Gypsy Cove and Yorke Bay have been detonated, ridding the Islands of a key reminder of the conflict.

Locals flocked to explore the beaches – considered some of the Islands’ most beautiful areas – that have been off limits since 1982 when Argentina planted the mines in anticipation of a British landing on Yorke Bay which did not materialise. 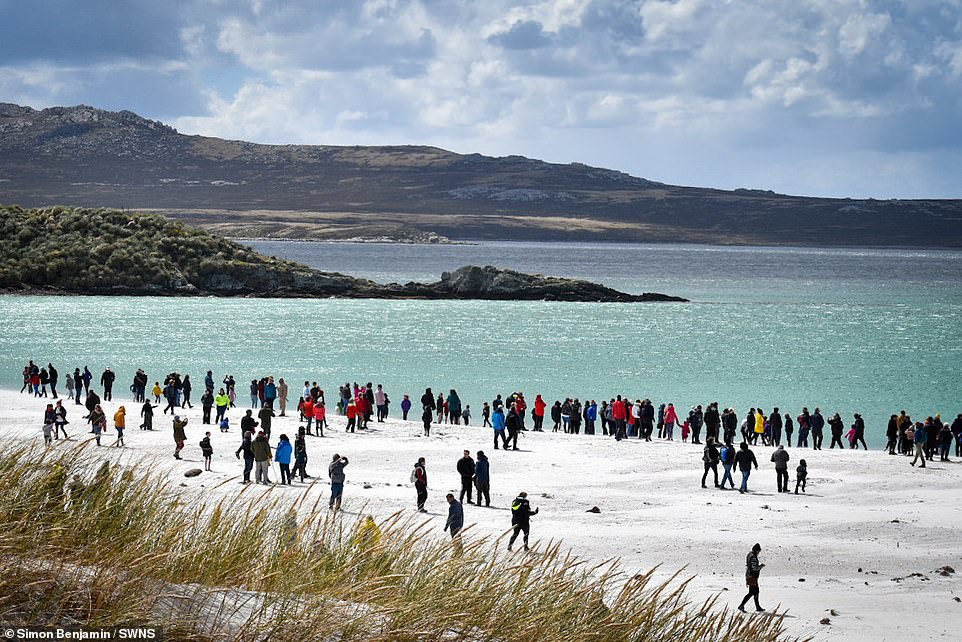 Pictures showed people enjoying the sun on Yorke Bay on Saturday afternoon. The beauty spot had been off limits since 1982 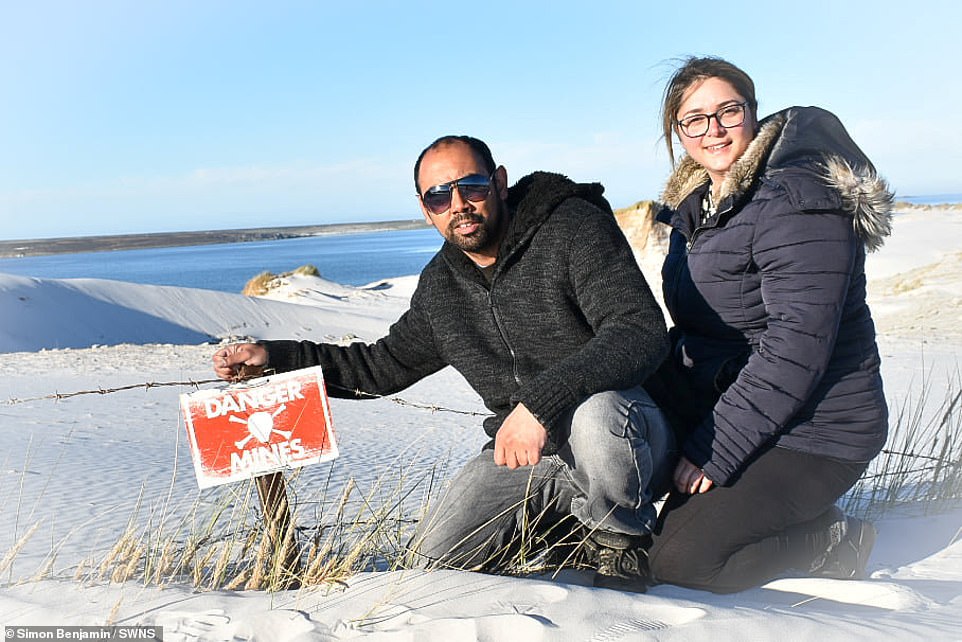 Resident Simon Benjamin snapped photos of the crowds enjoying themselves at Yorke Bay on Saturday afternoon after the last of the warning signs and fences were removed.

The car sales manager, 37, said it was ‘an emotional day’ for Islanders.

‘They never expected to see the day when they could set foot on the beach again,’ he said. 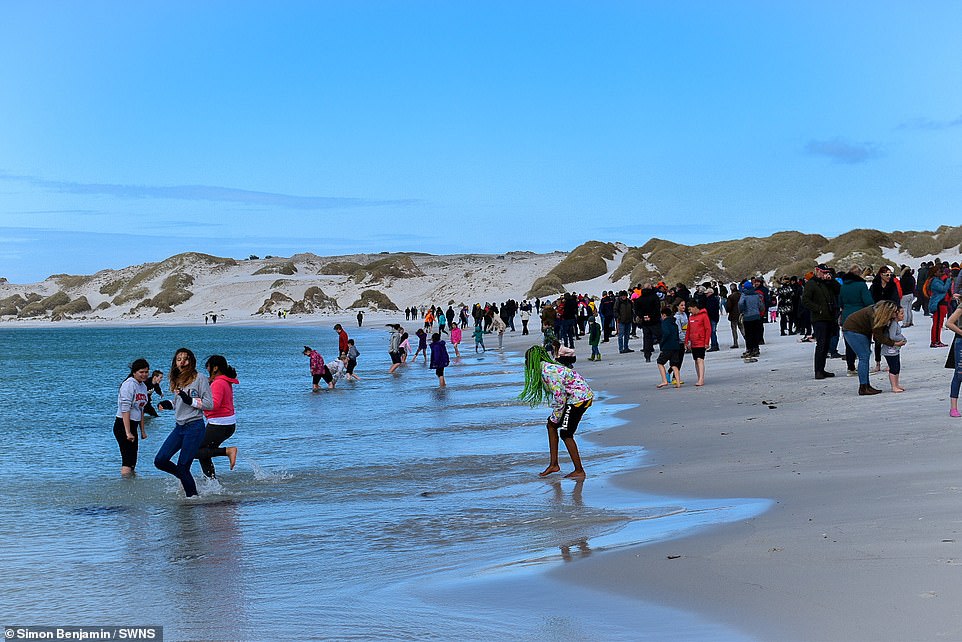 Benjamin, who took the photos of locals enjoying the beaches, said it was an ’emotional day’ for islanders, many of whom thought they would never be able to walk on the beaches 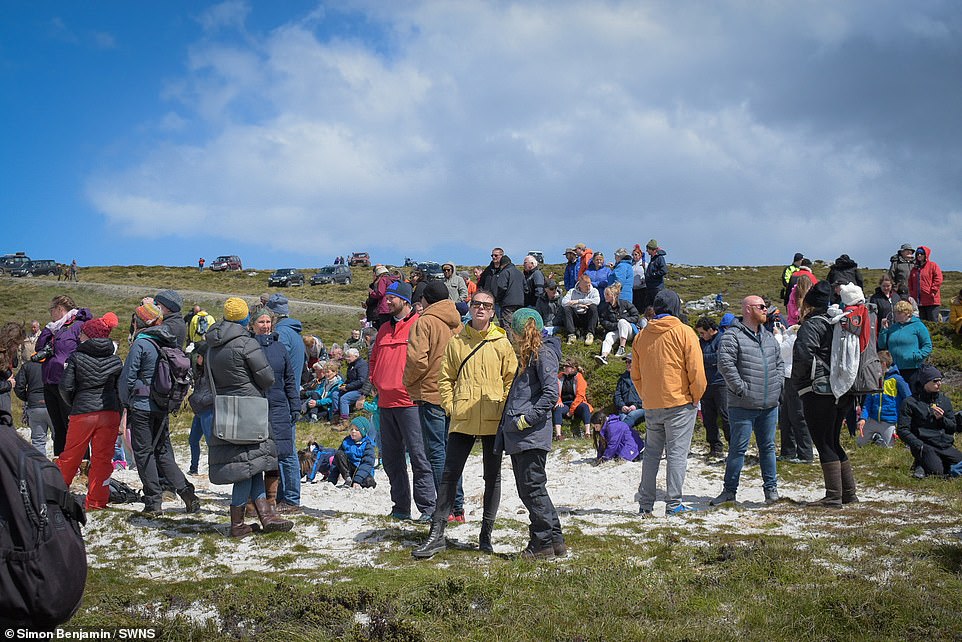 Despite the chilly weather, hundreds flocked to the beaches on Saturday to celebrate the Falkland Islands being free of mines 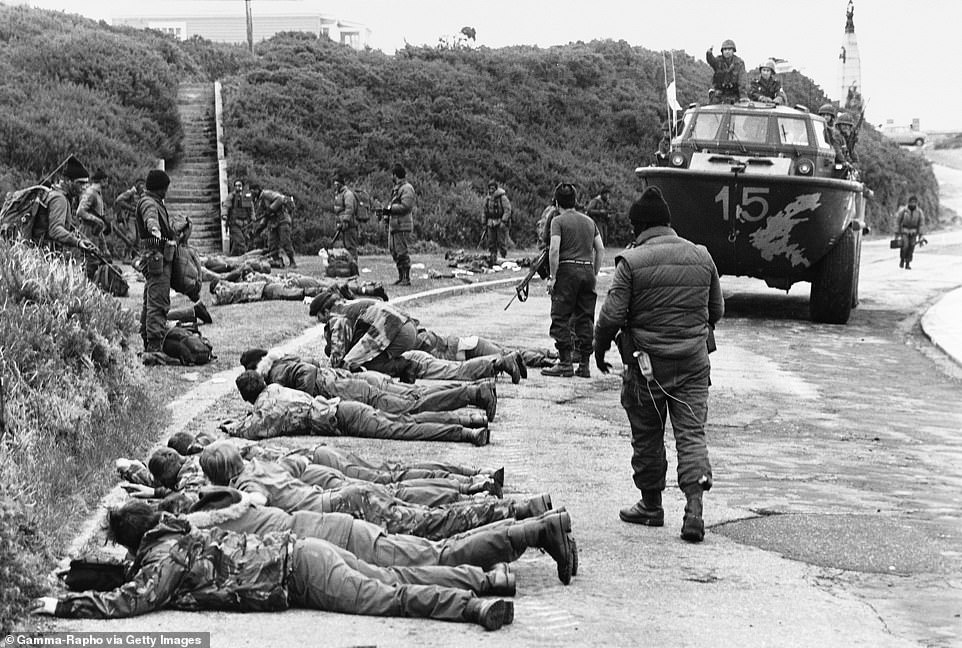 British troops surrender to Argentine forces in Port Stanley on April 2, 1982 when Argentina invaded the Falkland Islands in hope that their recapture would boost support for the ruling military junta [File photo] 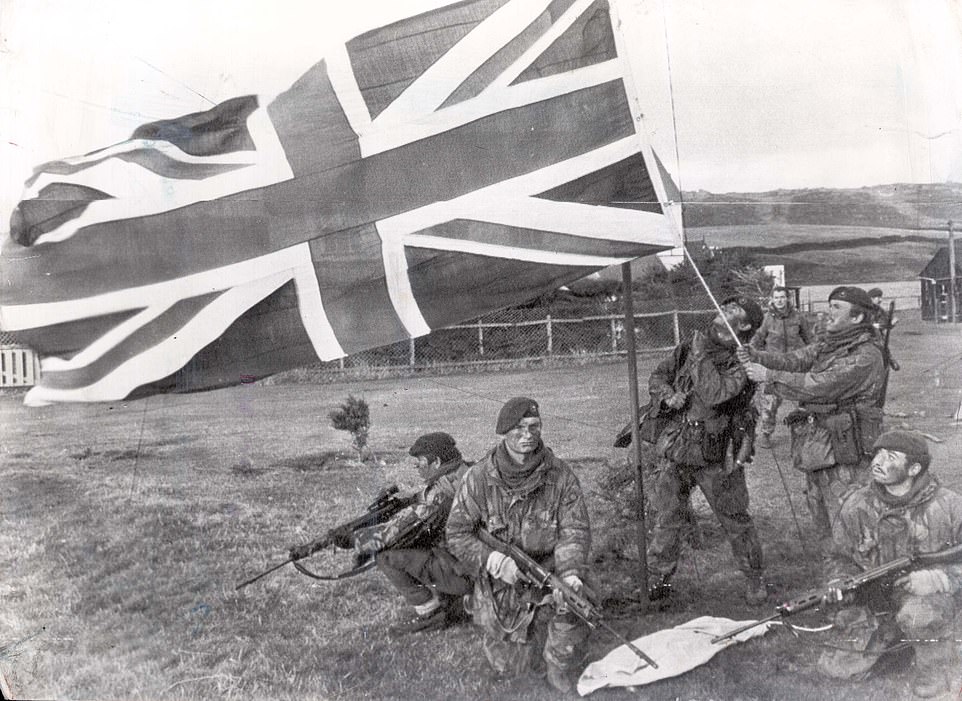 Argentine forces left an estimated 13,000 mines on the British overseas territory, according to the BBC.

Argentine leaders believed recapturing the territory would restore support for the ruling party at a time of economic crisis.

The UK had ruled the islands for 150 years but the junta justified the invasion by saying Argentina had inherited the land from Spain in the 1800, citing the Falklands’ proximity to South America as a further reason.

Prime Minister Margaret Thatcher deployed a task force to fight on behalf of the traditionally British residents of the Falklands.

In the short war that followed, 649 Argentinians died, along with 255 British servicemen and three islanders.

Following a tough sea battle, British forces made landing to the north of Stanley, before fighting their way in to the capital. The Argentinians surrendered on 14 June

On April 2, 1982, Argentina invaded the Falkland Islands, over which it had claimed sovereignty for many years.

The ruling military junta did not believe the United Kingdom would attempt to regain the islands by force as they lay in the South Atlantic some 8,000 miles from the British Isles.

However, a task force was sent by Prime Minister Margaret Thatcher, reaching the Islands in early May.

Yorke Bay was heavily mined as it was anticipated to be the likely site of a British landing due to its proximity to both the capital, Stanley, and the airport.

In actual fact, UK troops approached Stanley from land – meaning the mines remained undetonated in the ground – as part of a land, air and sea assault.

Argentina surrendered on June 14, bringing to an end the 74-day conflict that killed 907 people.

Rival claims to the Falkland Islands continue to hamper British-Argentine relations and tensions periodically flare up depending on the leadership of the two countries.

The expansion of sand dunes on the beach complicated plans to remove the mines for years, with shifting sands meaning some explosives could be buried even deeper while others were brought to the surface.

The uninhabited beaches have become something of a wildlife refuge for the local Magellanic penguins.

The birds, which are too light to set off the mines themselves, have flourished in the absence of human activity and have become a draw for tourists who were able to view them from a distance.

Landmines are banned under the 1997 Convention on the Prohibition of the Use, Stockpiling, Production and Transfer of Anti-Personnel Mines and on Their Destruction – also known as the Mine Ban Treaty.

More than 150 countries have signed up to the treaty and committed to eradicating mines from their territories.

Efforts to remove the now-illegal mines in the Falkland Islands had been underway since 2009 as part of the UK’s obligations to the convention.

Demining teams from Zimbabwe were recruited to assist UK companies with the detonations, working in the challenging weather conditions of the windswept islands. 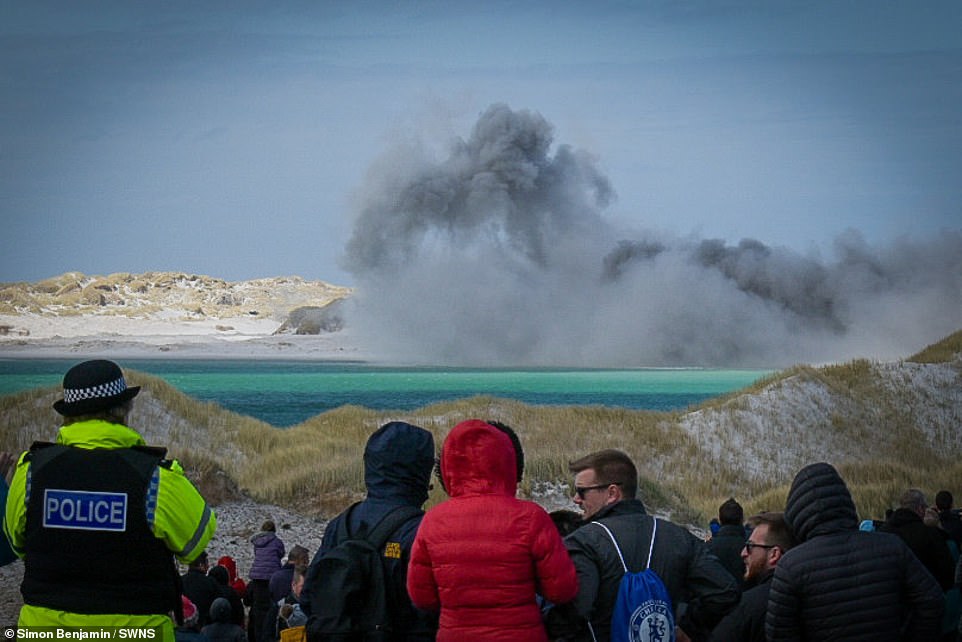 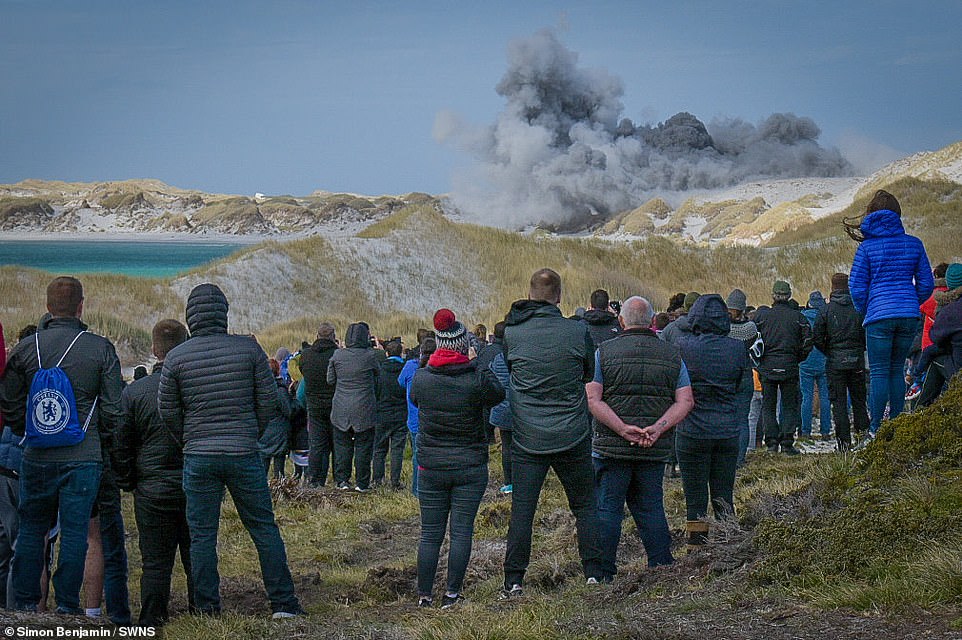 An estimated 13,000 mines were left on the Islands by invading Argentine forces during the 1982 conflict with the UK. Pictured: Residents watch the final detonations of mines on Saturday 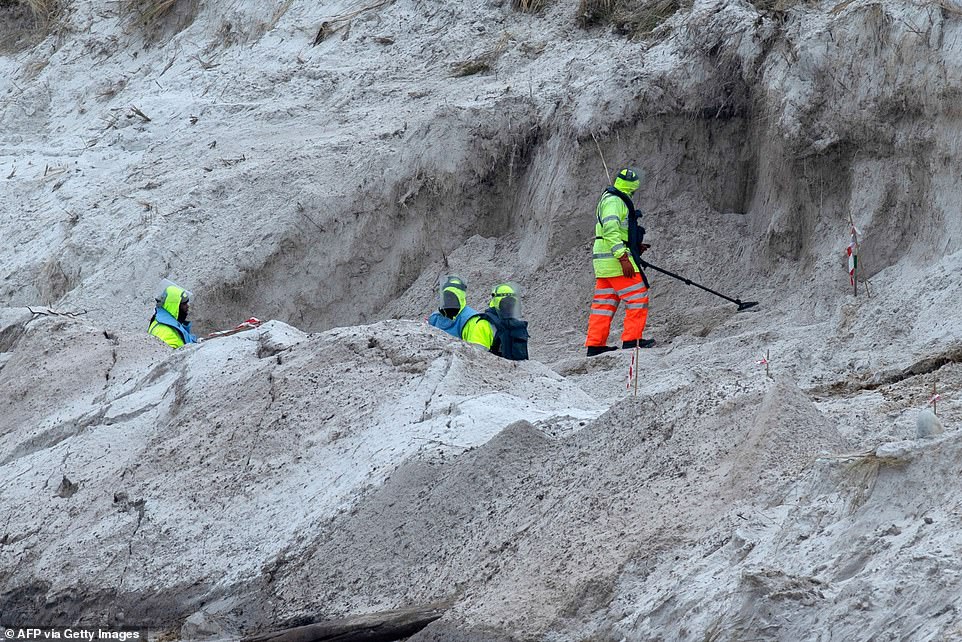 Specialist demining teams from Zimbabwe joined British firms in efforts launched in 2009 to rid the Falkland Islands of landmines. Pictured: Zimbabwean specialists search for mines in Stanley in 2019 [File photo] 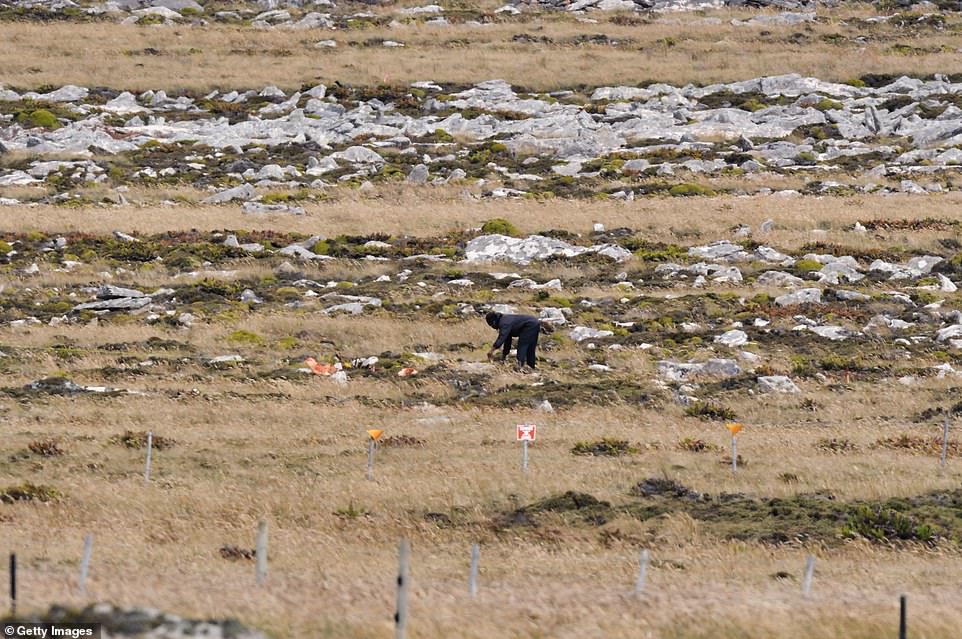 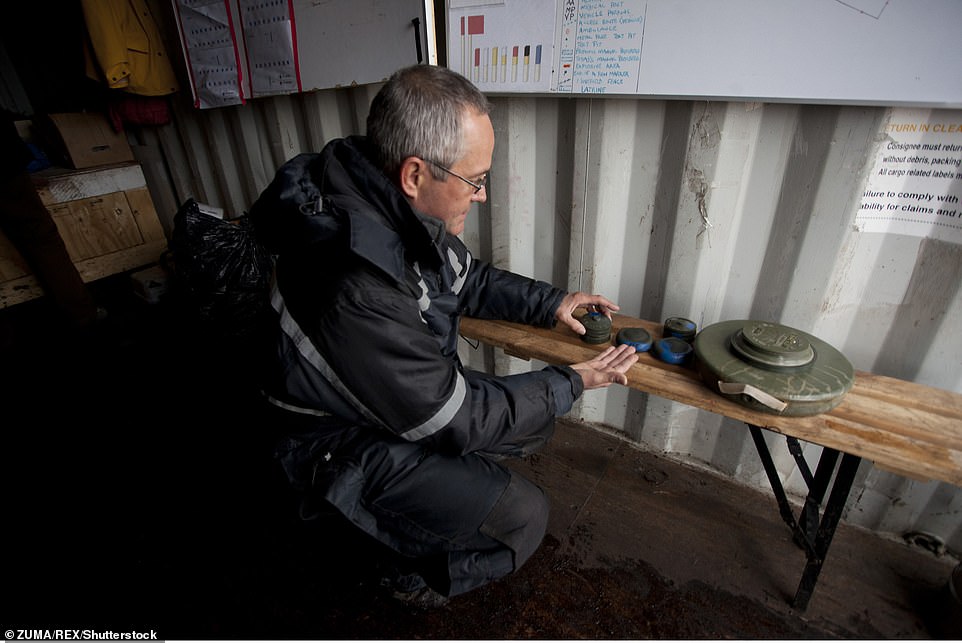 Guy Marot, an expert in mine clearance, handles Italian landmines and Spanish anti-tank mines before undertaking a sweep for landmines in the Falkland Islands in 2013 [File photo]

Wendy Morton, the UK minister with responsibility for the Falklands, called the removal a ‘momentous milestone’ in the Islands’ history.

She added that the UK government was contributing £36million pounds this year to its Global Mine Action Programme 2 to continue demining efforts worldwide as part of the Landmine Free 2025 campaign, which seeks to completely clear the world of landmines.

According to Landmine Free 2025, more than 60 million people remain in danger of  being killed or maimed by landmines.

A separate group, landminefree.org, states that there are an estimated 110 million land mines in the ground today with an equal amount in stockpiles waiting to be planted or destroyed.

The low cost of producing and distributing mines led to their widespread popularity around the world but their continued presence – often long after conflicts have ended – creates problems for safety as well as hampering economies by contaminating land that could be used for farming or other industry.

Mines are expensive and dangerous to remove and demining efforts require sustained political and financial commitment.

Landminefree.org said Egypt, Angola and Iran account for more than 85% of mine-related casualties worldwide each year.

LANDMINES AROUND THE WORLD

There are an estimated 110 million land mines in the ground today.

An equal number remain in stockpiles waiting to be planted or destroyed.

Landmines left over from conflicts injure and kill thousands of people each year and can hamper economies by contaminating land that could be used for farming or other industry.

Their low cost has made mines popular in conflicts around the world but removing them is expensive and time consuming so they ofter remain in the ground for decades after a conflict has ended. 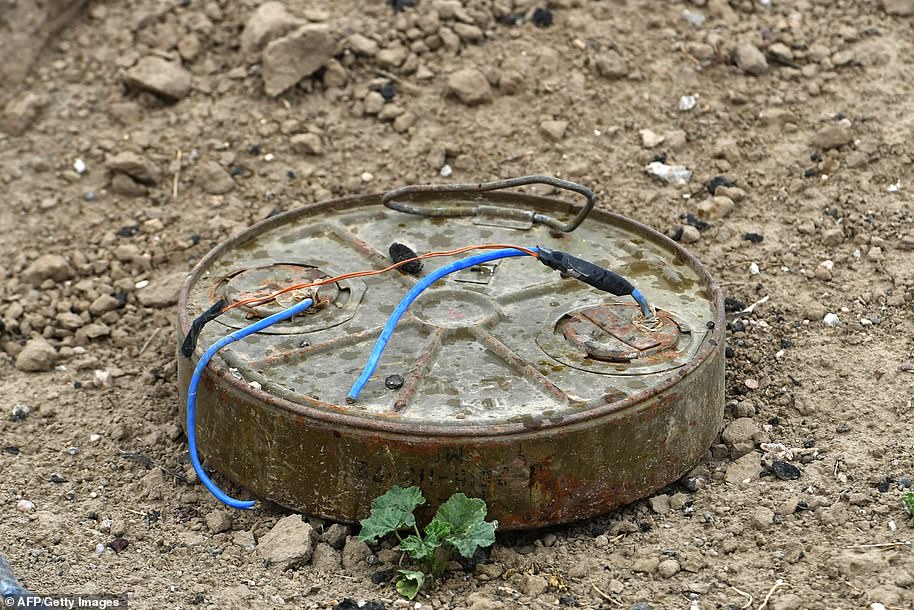 In 1997,  the Convention on the Prohibition of the Use, Stockpiling, Production and Transfer of Anti-Personnel Mines and on Their Destruction – also known as the Mine Ban Treaty – was created.

More than 150 countries have signed up to the treaty and committed to eradicating mines from their territories.

Despite this, mines remain a problem in many countries, putting millions of people at risk.

Here are the countries with the most landmines:

Cambodia: Up to 10 million

Somalia: Up to 2 million