He’s been COR-BINNED! Humiliated Labour leader Jeremy Corbyn is pictured leaving post-defeat interview by the back door – as he refuses to accept blame for crushing defeat and ‘Red’ Len McClusky attacks his ‘metropolitan’ world view

Jeremy Corbyn was pictured leaving by the back exit between bins at Islington Town Hall today after refusing to accept the blame for Labour’s election catastrophe yesterday – despite a poll identifying his leadership as the biggest factor in the party’s worst defeat since 1935.

After his utter humiliation at the polls, Mr Corbyn resisted pressure to quit immediately, saying he would cling on for several months to allow his party to ‘reflect’ on the reasons for the defeat.

In an astonishing interview he declined to say sorry to the dozens of MPs across the North and Midlands who lost their seats as a result of Labour’s failure to appeal to working-class voters. 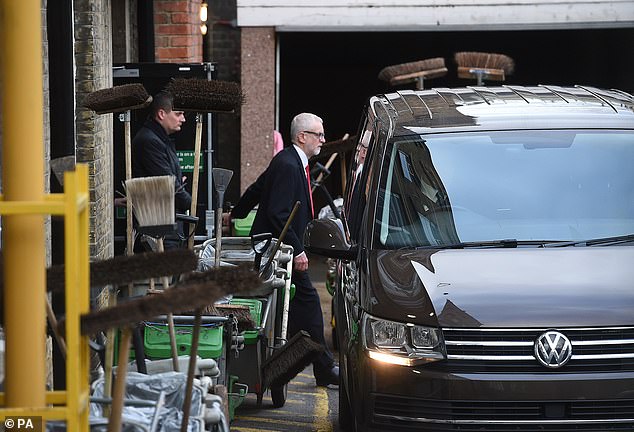 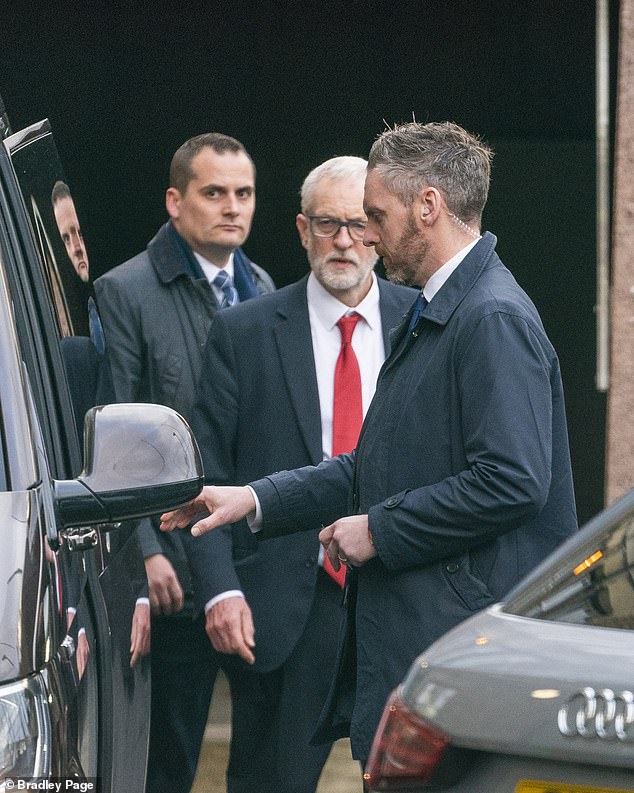 Earlier, he was pictured leaving by the back exit between the bins at Islington Town Hall after a much-criticised statement to his north London constituents in which he had vowed to carry on as leader until a successor is chosen.

As the devastating defeat triggered an extraordinary civil war within Labour, party figures tore into each other over the scale of the losses.

Even Mr Corbyn’s hard-Left ally ‘Red’ Len McCluskey called on him to quit in ‘the near future’, saying his ‘metropolitan’ world view had alienated Labour’s northern working-class heartlands.

In the television interview, Mr Corbyn insisted his hard-Left manifesto had been ‘hugely’ popular with the public and tried to pin the blame for the defeat on Brexit. 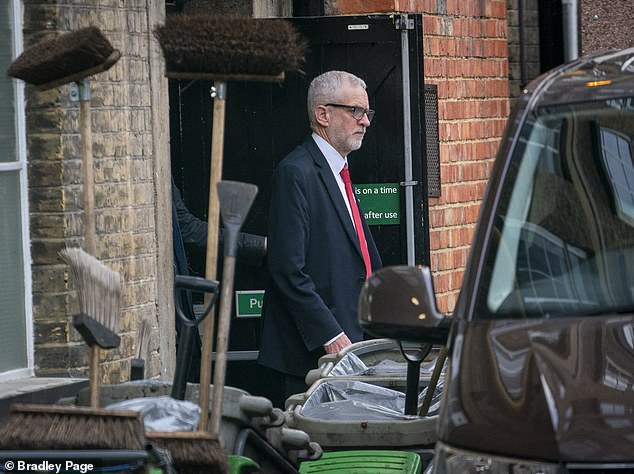 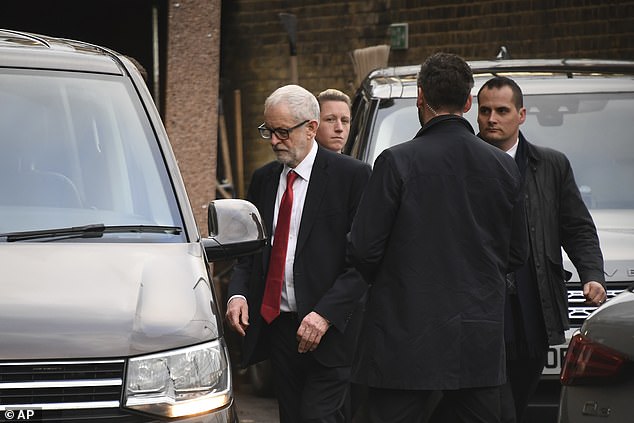 During his interview, Corbyn (leaving Islington Town Hall) vowed to carry on as leader until a successor is chosen 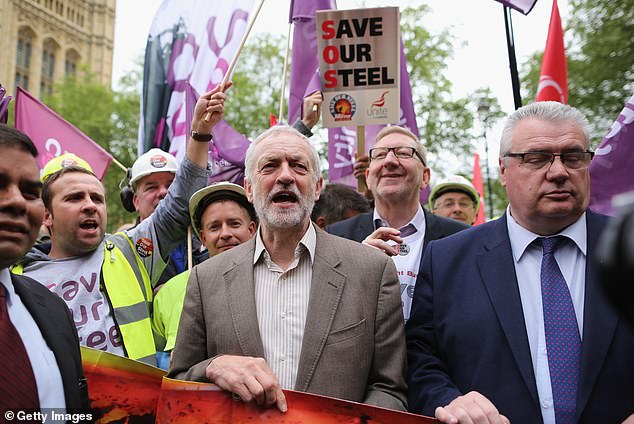 But a poll for Opinium found the main reason people did not vote Labour was because of the leadership (cited by 43 per cent) rather than the party’s confused stance on Brexit (17 per cent) or its economic policies (12 per cent).

Mr Corbyn said: ‘I have pride in our manifesto that we put forward, and all the policies we put forward, which actually had huge public support. But this election was taken over ultimately by Brexit and we as a party represent people who voted both Remain and Leave.’

The founder of Momentum was torn into by former Labour Home Secretary Alan Johnson – after claiming Mr Corbyn’s manifesto was ‘basically popular’.

As they clashed on ITV News following the exit poll, Jon Lansman, who set up the Corbynista support group, attempted to blame the defeat on Brexit.

An infuriated Mr Johnson described Momentum as a ‘cult’, saying: ‘Corbyn was a disaster on the doorstep. Everyone knew he couldn’t lead the working class out of a paper bag.’

He added: ‘I want Momentum gone. Go back to your student politics and little Left-wing.’

When asked if the projected results were a rejection of Mr Corbyn’s policies, Mr Lansman said: ‘No, I don’t think that.

I think it was a Brexit election. Brexit was incredibly hard for us to navigate.’

He was immediately rounded on by angry MPs, peers and defeated candidates.

Unite union general secretary Mr McCluskey said Labour had ‘made mistakes’ during the election campaign, including announcing an ‘incontinent’ slew of new policies and a failure to deal with the anti-Semitism row within the party.

But he said Mr Corbyn’s ‘leadership became an issue on the doorstep’. In an article for HuffPost, he said the party had forgotten ‘the communities that gave birth to the Labour movement’.

He said a future leader would need to ‘realise that the whole country is not very like Labour London.

As important as it is, too often, Labour addresses the metropolitan wing of its electoral coalition in terms of values – openness, tolerance, human rights – and the ‘traditional’ working-class wing simply in terms of a material offer, as if their constituencies did not have their own values of solidarity and community. That must change.’

Others blasted Mr Corbyn and his Momentum allies. Former Labour Home Secretary Lord Blunkett said of the Corbynites: ‘I haven’t heard one of them apologise to all those who lost their seats last night.’

The bookies’ favourite to become the next Labour leader, Sir Keir Starmer, said the election result was ‘devastating’.

He added: ‘We’ve got to reflect on this together as a party and as a movement so we can understand.’

Contenders for the Labour succession

SIR KEIR STARMER, 57 Labour’s Brexit spokesman was Director of Public Prosecutions before becoming MP for Holborn and St Pancras in 2015. A strong Remainer, he was sidelined during the 2019 election campaign. Odds: 2/1

REBECCA LONG-BAILEY, 40 This docker’s daughter and ex-postwoman trained as a solicitor, and was elected MP for Salford and Eccles in 2015. She later became Labour’s business spokesman and is a protege of John McDonnell. 4/1

YVETTE COOPER, 50 A former Cabinet minister who has been an MP since 1997 and is now chairman of the Commons home affairs committee. A moderate MP, she came third in the 2015 Labour leadership contest – but may struggle this time due to her links with the Blair era. 5/1

ANGELA RAYNER, 39 Brought up on a council estate, Labour’s education spokesman left comprehensive school at 16 with no qualifications, and had her first child at the same age.

She became MP for Ashton-under-Lyne in 2015 after working as a union official. Considers herself ‘soft Left’. 7/1

JESS PHILLIPS, 38 The plain-speaking backbench MP for Birmingham Yardley was elected in 2015 after working for domestic abuse charity Women’s Aid. She has a large social media following and is a critic of Jeremy Corbyn. 8/1

EMILY THORNBERRY, 59 The Shadow Foreign Secretary joined Labour at 17 and has been MP for Islington South since 2005.

She was forced to quit Ed Miliband’s front bench in 2014 in a row over a St George’s flag – but has deputised for Mr Corbyn at Prime Minister’s Questions. 12/1