Whether competing in a race or trying to beat a person record, many runners have the same goal – to go faster.

But speeding up requires us to defy our natural biology that’s been learnt through millions of years of evolution, a new study suggests.

In experiments, scientists combined data from runners monitored in a lab along with 37,000 runs recorded on wearable fitness trackers.

They found that humans naturally run at the most energy-efficient speed – around 2 to 3 metres per second – regardless of the total distance they have to cover.

Researchers say our natural tendency is to run at a speed that conserves caloric loss – an adaption that racers seeking to shave time off their record have to overcome.

Runners prefer the same pace, regardless of distance that needs to be covered, as a way to conserve calorie loss

Runners’ preferred speeds are energy optimal – meaning speeds that don’t burn off too much energy.

Although runners may run to burn calories, they’re naturally adapted move at a speed to minimise this from happening.

Humans, like other animals, have a free-living preference for energy-optimal gait.

Today, running is an activity associated with attempts to burn calories and therefore lose weight.

But historically, when our ancestors were running – away from danger, for example – they needed to conserve energy, partly due to the scarcity of food sources.

This evolutionary tactic still affects the way we run today, the study suggests.

‘When you go out for a run, you run to have your best fuel economy,’ said study author Scott Delp at Stanford University.

‘So, regardless of the distance you travel, you run in such a way that you burn the least amount of fuel per distance travelled.’

The research group have been studying the mechanics of running in labs for 15 years but hadn’t studied running ‘in the wild’ until now.

For the study, they gathered data from 26 runners on treadmills and identified the energetically optimal speeds based on their oxygen consumption. 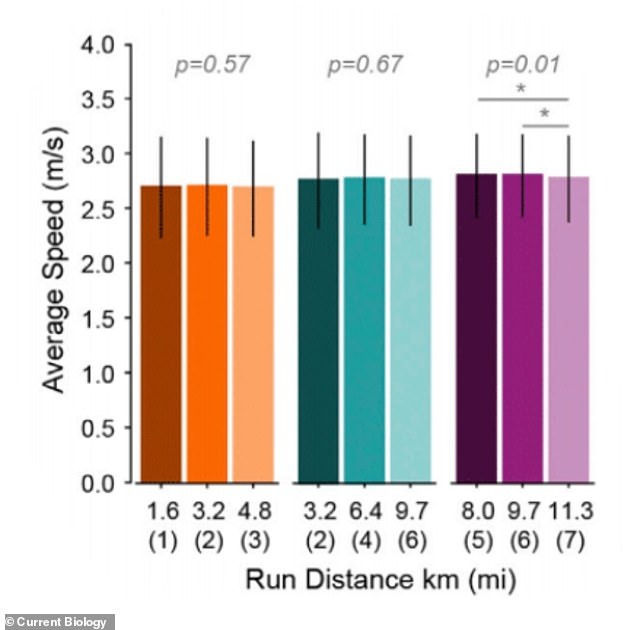 Results showed most of the runners stuck with the same speed, whether they were going for a short run or a long haul over 10 kilometers

EXERCISE REDUCES CALORIES BURNED AT REST FOR PEOPLE WITH OBESITY

In a ‘cruel twist’ for dangerously fat people, a 2021 study found exercising when obese reduces the number of calories burnt while sitting still.

This means that for someone who’s obese, losing weight through physical exercise is likely to be substantially harder than it is for a lean person.

People who exercise burn fewer calories on ‘body maintenance’ – the ongoing processes in the body that happen even when we are fully at rest.

The thing is, this unfortunate metabolic phenomenon adversely impacts obese people the most.

They compared this to data collected from thousands of recreational runners outfitted with a waistband tracker from Lumo Run.

Results showed a ‘surprising’ consistency across the combined datasets, according to the experts.

Before starting the experiments, they had assumed that people run faster for shorter distances and then would slow their pace for longer distances.

In fact, what the team found was that most of the runners stuck with the same speed, whether they were going for a short run between 1.6 and 4.8 km), a long haul (up to 11km) or somewhere in between.

From an evolutionary perspective, it makes sense that people run at the speed that uses the least amount of energy.

This caloric conservation is something that has been observed across the animal kingdom – not only for running, but for walking, flying and swimming.

But in the modern world, humans’ reasons for running have changed, and if the goal is speed, there are some tricks runners can use.

‘Listening to music with a faster pace has been shown to help speed up stride frequency, which can then increase running speed,’ said Selinger. 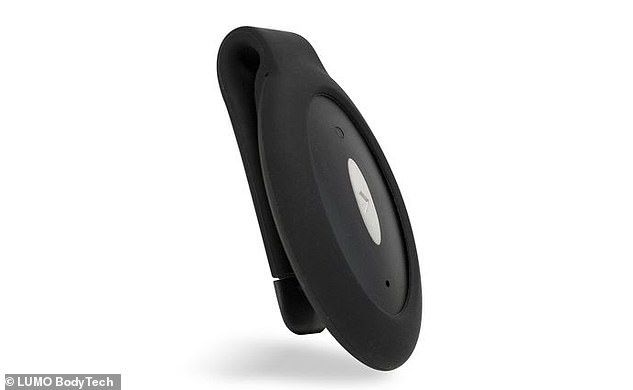 In addition, picking faster running buddies to accompany you on a session can give you a speed boost, the study authors say.

They hope that having large pools of fitness data from wearables will help researchers to gain more insights about humans.

By applying useable data from wearables, and perhaps improving wearables by adjusting algorithms according to research results, the researchers envision expansive ways to enable fitness based on natural, ‘free-living’ human behaviour.

‘We’re just starting to scratch the surface of what we can learn from wearable data,’ said co-author Jennifer Hicks at Stanford.

‘As a runner and researcher, in the future, I’m interested in layering this data with information about weather and the built environment to better understand how we can improve city planning to help people become more active.’

The study has been published today in the journal Current Biology.

EYE OF THE TIGER REALLY DOES MAKE YOU RUN FASTER! SCIENTISTS SAY LISTENING TO MOTIVATIONAL MUSIC CAN BOOST PERFORMANCE

Listening to motivational music like ‘Eye of the Tiger’ by Survivor does actually help runners combat mental fatigue, a 2021 study claimed.

University of Edinburgh experts found that a motivational playlist that included the 1982 smash hit improved performance on running tests after a mentally-draining cognitive test.

As well as ‘Eye of the Tiger’, the playlists included ‘No One Knows’ by Queens of the Stone Age, as well as ‘Run This Town’ by Jay-Z and ‘Power’ by Kanye West.

Arguably, ‘Eye of the Tiger’ has become a quintessential motivational tune for sportspeople and gym-goers alike – but researchers were intrigued to find out if it actually helped performance.

The study, published in the Journal of Human Sport and Exercise, claims to be the first to investigate the effect of listening to music playlists on endurance running capacity and performance when mentally fatigued.

Read more: Motivational music like ‘Eye of the Tiger’ DOES boost performance