Humans DNA could be edited to cure genetic conditions such as progeria that causes sufferers to age so fast they die while still teenagers.

Scientists at Harvard University say they have made a ‘base editor’ — or enzymes — that can cut out and replace faulty genes.

Bodies will then start to function normally, they said, as cells given the treatment will use the edited DNA.

Studies in animals stricken with progeria or sickle cell anemia found the animals were cured after getting the injection. It is yet to be tested in humans.

Dr James Liu, a geneticist who developed the tool, said it could be used for people such as progeria patient Adalia Rose who died this year at just 15 years old.

Scientists at Harvard University say they have made a ‘base editor’ that can be used to cut out and replace faulty genes. It is yet to be tested on humans (stock image) 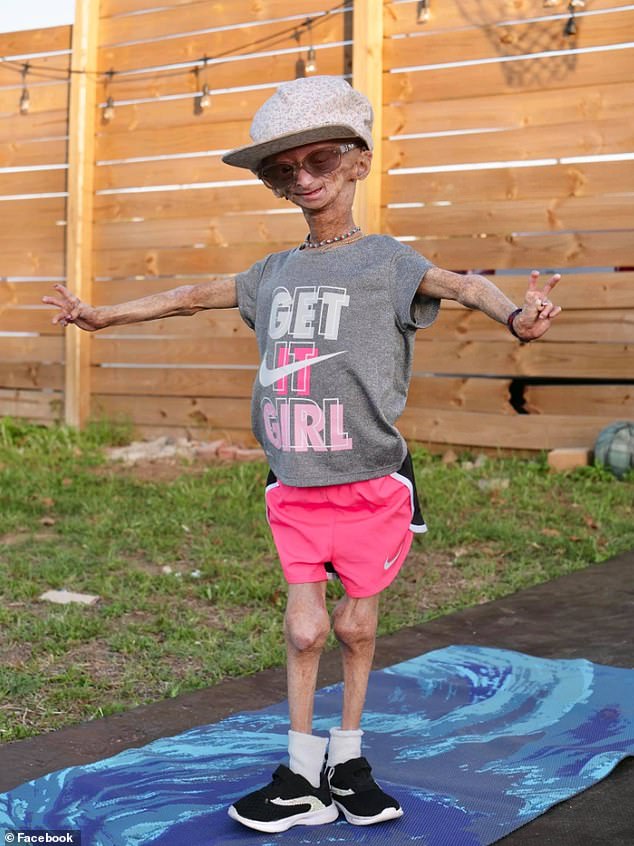 Dr James Liu, a geneticist who developed it, said the device could be used to help patients such as Adalia Rose (pictured) who died aged 15 with the genetic condition progeria which causes the body to age rapidly and not grow normally

Progeria is a very rare genetic condition, with up to 300 cases known across the whole of the U.S. estimates suggest.

It is caused by a single mutation in DNA which leads to rapid aging and development problems within the first few months of life. Sufferers rarely live beyond their teenage years.

Dr Liu said he was hopeful human trials could begin to establish whether his device could help patients with the disease.

He told CNN: ‘Base editors are like pencils that precisely correct letters [in the DNA] by changing them to one of four different letters.

‘We have to make sure all of these different technologies go through clinical trials very carefully.

‘But if they prove to be safe and efficacious, then one could imagine treating not just rare misspellings that cause grievous genetic diseases but perhaps even treating gene variants we know contribute to terrible diseases like Alzheimer’s.’

He suggested the treatment could also be used for other patients with genetic conditions such as those suffering from sickle cell anemia — when red blood cells do not form correctly.

Last year Dr Liu’s team gave the treatment to mice that were sickened with progeria from human patients 14 days after they were born.

The technology was also tested in mice that had sickle cell anemia and again 16 weeks later the scientists said that 80 percent of the mice given the jab were greatly improved.

Rose, from Texas, was diagnosed with progeria when she was just three months old.

But as she grew up she found fame on social media, racking in almost 3million subscribers on YouTube alone.

In January, her family said she had died as a result of her condition.

She reached two years over the average life expectancy for someone suffering from the disease.

What is progeria and can it be cured?

Progeria is characterized by the appearance of accelerated aging in children, the U.S.-based Progeria Research Foundation says.

It is not inherited but rather the mutation that triggers the condition happens at random.

Symptoms include a lack of growth, loss of body fat and hair, stiff joints, and hip dislocation.

Most kids with progeria look healthy when they’re born, but start to show signs of the disease within their first year.

Babies with the condition do not grow normally, and rapidly begin to age.

There is currently no cure for progeria, but medications may alleviate symptoms or delay progression.