Human ancestor Homo erectus may have lived two million years ago and emerged in South Africa – 200,000 years before previously thought

Man’s direct ancestor Homo erectus could be 205,00 years older than previously thought and may have emerged in South Africa, researchers have said.

Analysis of ancient skull fragments found near Johannesburg push the origin of the species back further than was believed.

It also moves the site of the species’ origin to South Africa, as it was previously thought to be further east.

Analysis of ancient skull fragments (pictured) found near Johannesburg push the origin of the species back further than was thought, to between 2.05 and 1.95million years ago

The researchers, from US, South Africa and Australia, believe H. erectus lived alongside two other hominins at this time — Australopithecus and Paranthropus.

They said their discovery, detailed in the journal Science, may have implications for the origins of modern humans as H. erectus is a direct human ancestor.

It is best known for migrating out of Africa into the rest of the world.

The H. erectus skull bone named DNH 134 was unearthed in Drimolen – one of the archaeological sites in the Cradle of Humankind, 30 miles from Johannesburg.

They believe the skull DNH 134 was ‘likely aged between two and three’ and was dated to between 2.04 to 1.95 million years old.

Before the discovery of DNH 134, the oldest H. erectus in the world was from Dmanisi in Georgia, dating to 1.8 million years ago, the researchers said.

Professor Andy Herries, head of the department of archaeology and history at La Trobe University in Australia and lead author on the study, said: ‘The age of the DNH 134 fossil shows that Homo erectus existed 150,000 to 200,000 years earlier than previously thought.’

The researchers believe their discovery could have implications for the evolutionary timeline of modern humans. 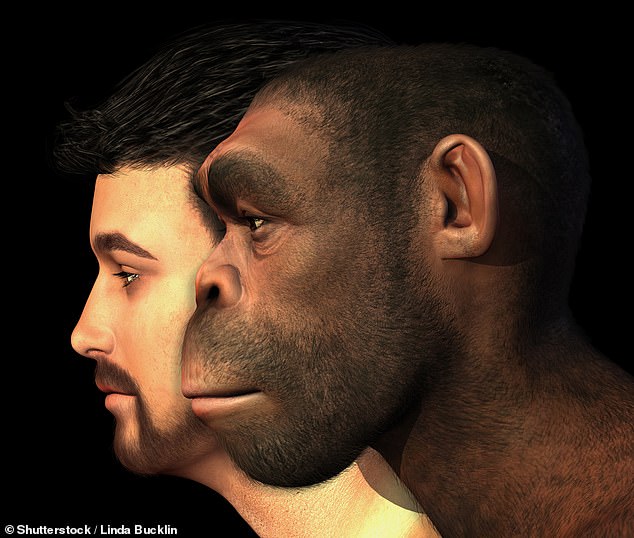 Stephanie Baker, a PhD candidate at the Palaeo-Research Institute at the University of Johannesburg, said: ‘Until this find, we always assumed Homo erectus originated from eastern Africa.

‘But DNH 134 shows that Homo erectus, one of our direct ancestors, possibly comes from southern Africa instead.

‘That would mean that they later moved northwards into east Africa. ‘From there they went through north Africa to populate the rest of the world.’

The researchers said the DNH 134 skullcap also shows that three species of early human ancestor lived in South Africa at the same time.

Professor Herries said: ‘We can now say Homo erectus shared the landscape with two other types of humans in South Africa, Paranthropus and Australopithecus.’

According to the researchers, H. erectus was tall, walked upright, was more human-like in comparison to the other two species and ate things which are easier to digest – like fruits and berries.

Ms Baker added: ‘We also know that they were eating meat, but we aren’t exactly sure how they were getting it yet.

‘We can say that at least these early Homo erectus weren’t hunting with any weaponry yet.’

WHO WERE HOMO ERECTUS?

First thought to have evolved around 1.9 million years ago in Africa, Homo erectus was the first early human species to become a true global traveller.

They are known to have migrated from Africa into Eurasia, spreading as far as Georgia, Sri Lanka, China and Indonesia.

They ranged in size from just under five feet tall to over six feet.

With a smaller brain and heavier brow than modern humans, they are thought to have been a key evolutionary step in our evolution.

It was previously thought Homo erectus disappeared some 400,000 years ago.

However, this date has been dramatically reduced, with more recent estimates suggesting they went extinct just 140,000 years ago.

They are thought to have given rise to a number of different extinct human species including Homo heidelbergensis and Homo antecessor.

Homo erectus is thought to have lived in hunter gatherer societies and there is some evidence that suggests they used fire and made basic stone tools.