Police were caught on camera arresting a qualified nurse as she tried to take her 97-year-old mother from a care home after nine months in order to be looked after by her family.

Former Coronation Street actress Leandra Ashton filmed officers as they arrested her 73-year-old mother, Ylenia Angeli, before putting her dementia-hit grandmother into the patrol car to be sent back to the facility.

Ylenia, who is an occupational health nurse, was handcuffed and taken to Hull Police Station before later being de-arrested.

The family were acting ahead of the second nationwide coronavirus lockdown that comes into force from midnight.

In the initial clip, Leandra records the police officers who have pulled up in front of the family in a car park.

She films the scene as she says: ‘So let’s just make this very clear, my nan – my 97-year-old nan – here who we have taken from the care home because we haven’t seen her for nine months is now being taken back by force to her care home.

‘My mother has been arrested, my mother is in the back of the car here.’

Her mother Ylenia then raises her wrists to show that she has been handcuffed.

Leandra continues: ‘She is a nurse – a fully-qualified nurse – who is wising to care for her own mother and here we have an incredible use of police time to take my 97-year-old grandmother back into a care home where she is deteriorating where we haven’t been able to see her for nine months.’

Panning the camera to her grandmother in the front seat, the woman becomes emotional as she says: ‘Nan, we love you and we are going to fight for you.’ 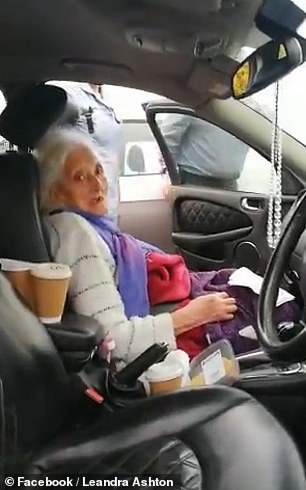 Leandra Ashton filmed officers as they arrested her mother, 73, before putting her dementia-hit grandmother (pictured) into the patrol car to be sent back to the facility 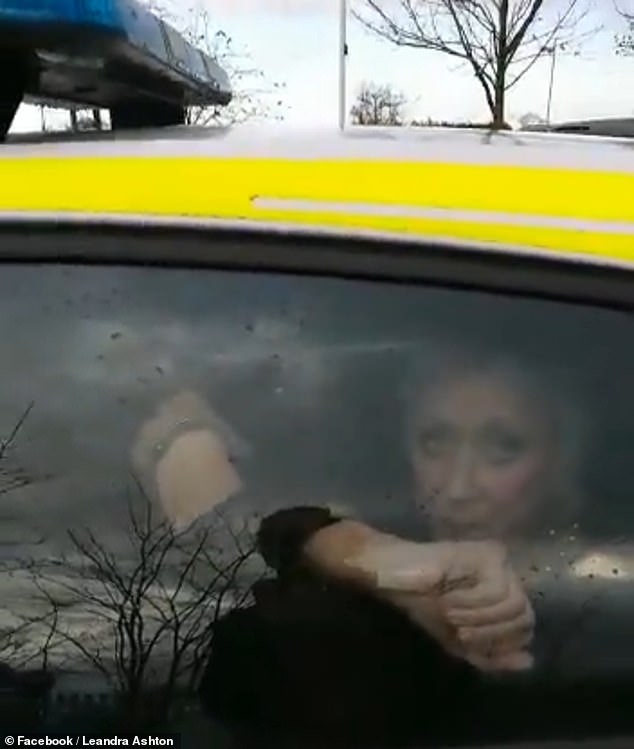 A second clip shows Leandra’s mother trying to comfort her daughter from the back of the patrol car as she urges her to ‘stay strong’.

The officers say she will be taken to Hull Police station before they begin negotiating over taking Leandra’s grandmother back to the care home.

Leandra, who appeared as Saskia Larson in Coronation Street in 2016, later shared the clip to social media before blasting the actions of police in a lengthy post that read: ‘So our final “window visit” at the care home before lockdown didn’t go according to plan.

‘When you are faced with irrational responses your actions become irrational.

‘When you are repeatedly told “we’re just following the rules” and those rules have kept you away from your loved one for about 8 or 9 months, you question those rules.

‘When the rules – like so many in this period of our history – are purporting to be in place to ‘protect’ but yet are causing untold damage to physical and mental health then you start breaking the rules. 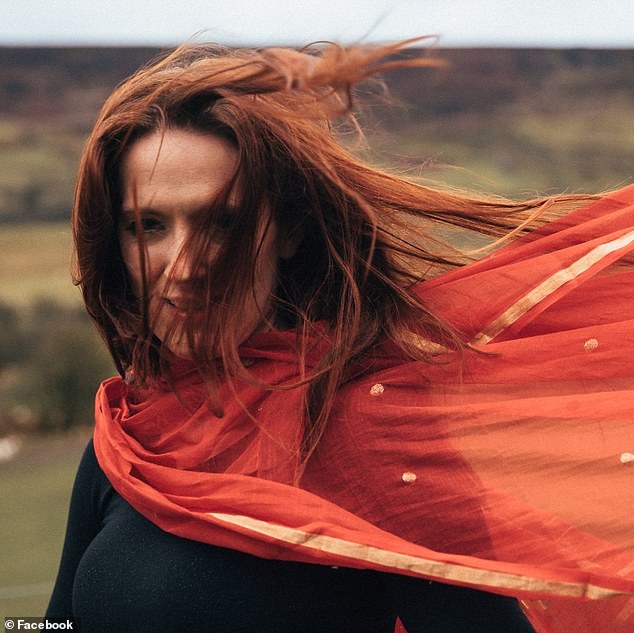 Leandra Ashton (pictured) later shared the clip to social media before blasting the actions of police in a lengthy post that began: ‘So our final “window visit” at the care home before lockdown didn’t go according to plan’ 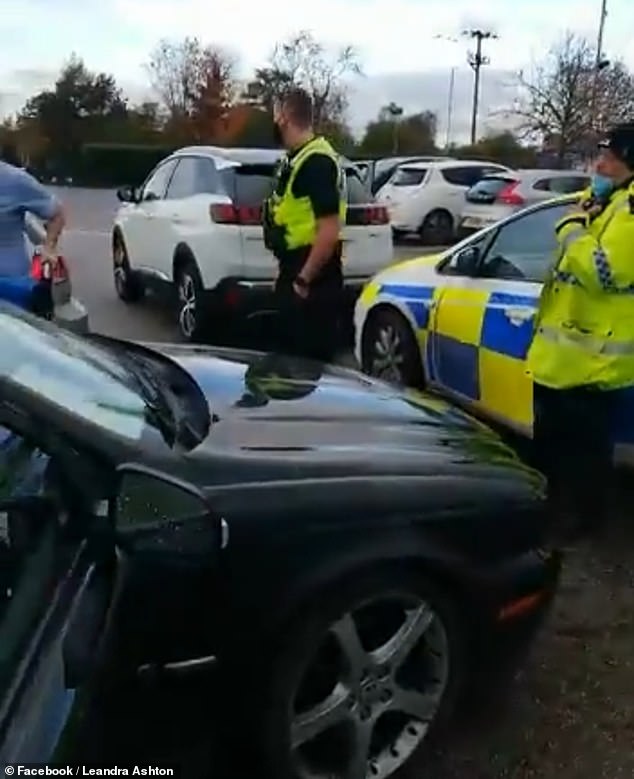 ‘Yesterday my 73 year old Mum, pushed into the care home to hug my 97 year old Grandma who has dementia. She then quietly wheeled her out.

‘My Mum, is a trained nurse and wishes to care for my Nan at home. We only have Power of Attorney for my Nan’s finances. Not for her wellbeing. Before lock down we could over come this by visiting my Nan regularly. Now we can’t. My Mum was arrested because she refused to take my Nan back to the care home.

‘It feels like we are living in the worst Kafka-esque nightmare. People in masks coming to take your relative away from you.

‘I find myself for the first time in my life on the wrong side of the law.

‘I have tried to go through all the “official channels”: written countless letters to MPs, Public Health, the Care home… I have signed petitions, spoken to social workers, we raised a ‘safe guarding’ concern at the beginning of lockdown due to my Nan’s clear deterioration but this was inexplicably dropped and ‘disappeared’.

‘When she became ill at the care home and was admitted to hospital we asked that she not go back. Yet she was discharged from hospital behind our backs and without our consent. 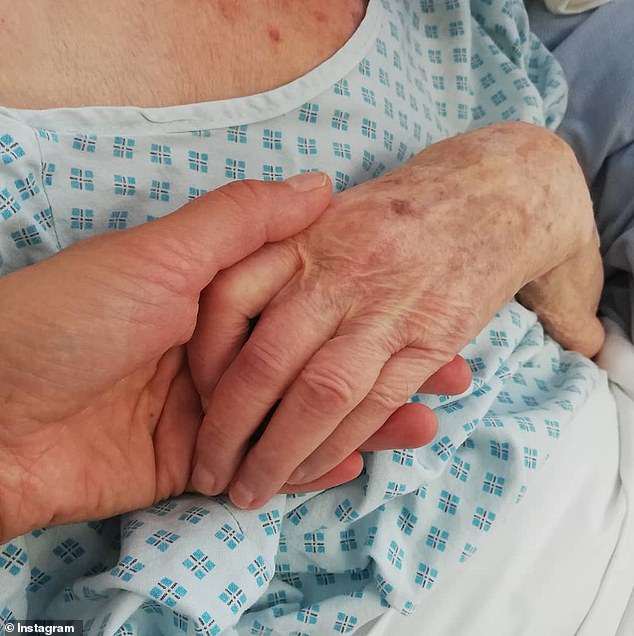 Leandra, who shared this photo of her previous visit to her grandmother in the care home, said they hadn’t been able to see her in nine months due to coronavirus restrictions

‘When your voice feels lost in a labyrinth of bureaucracy, when you are informed by the police that you are not on your relative’s relevant paper work(!!), when the system is so clearly failing, we have to stand up and reform it.

‘The police were as kind as they could be, they had a hard job. I thank them for trying their best and de-arresting my Mum so we could go home together.

‘The issues are with the ‘guidelines’ and with so much fear preventing creative problem solving. Relatives need to be given key-worker status. They need to be allowed into their relative’s private bedroom to visit, feed and care for their loved ones.’

Assistant Chief Constable Chris Noble, from Humberside Police, told MailOnline: ‘These are incredibly difficult circumstances and we sympathise with all families who are in this position.

‘We responded to a report of an assault at the care home, who are legally responsible for the woman’s care and were concerned for her wellbeing.

‘As was our legal duty, we returned the lady to the home and a 73-year-old woman who was initially arrested was de-arrested and allowed to return home with her daughter.

‘We understand that this is an emotional and difficult situation for all those involved and will continue to provide whatever support we can to both parties.’

The video comes after it was announced that care home visits can only take place outdoors, through windows or in personal protect equipment covered pods during the coronavirus lockdown.