A comet twice the size of Mount Everest is due to make its closest approach to Earth tonight, while stargazers are also treated to a supermoon.

Astronomers predict the fly-by will be too faint to see with the naked eye, but viewing it will be possible with a small telescope or binoculars.

Also on display tonight will be the biggest supermoon of the year so far, which will be visible when the moon rises.

The moon is expected to appear up to 30 per cent brighter and 14 per cent larger than normal.

Comet C/2017 K2 (PanSTARRS) was photographed by the Hubble Space Telescope on June 26 2017. It observed K2 when it was 1.5 billion miles from the sun, halfway between the orbits of Saturn and Uranus. It shows a fuzzy cloud of dust, called a coma, surrounding the comet 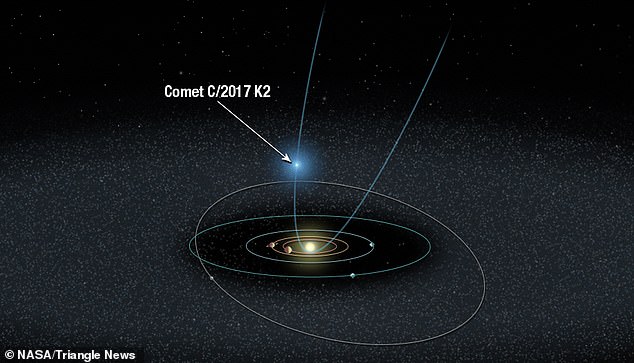 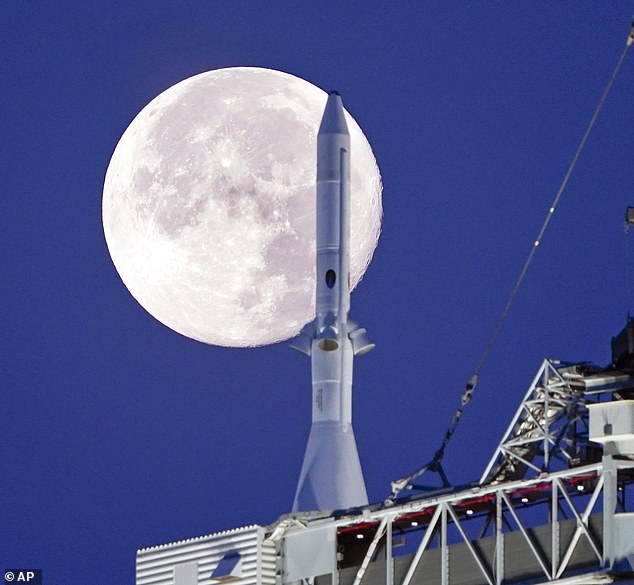 The Strawberry Supermoon sets in front of the NASA Artemis rocket with the Orion spacecraft aboard at the Kennedy Space Center in Florida last month.  A supermoon occurs when the lunar satellite reaches its closest point to Earth in its elliptical, 29.5-day orbit

Comet C/2017 K2 (PanSTARRS), will be visible from Earth tonight.

The comet will be faint, so a telescope or binoculars will be required.

K2 has already been travelling for about three million years from its birthplace in the Oort Cloud – a shell of icy objects almost a light year across on the solar system’s outermost fringes, where temperatures are about -450°F (-268°C).

Astronomers first spotted the comet in 2017 when it was 1.49 billion miles (2.4 billion km) from the sun and between the orbits of Saturn and Uranus, using the Panoramic Survey Telescope and Rapid Response System (PanSTARRS) in Haleakala Observatory, Hawaii.

At the time, it was the farthest active inbound comet ever seen, before the title was taken by Comet Bernardinelli-Bernstein, nicknamed ‘BB’.

BB was identified as a comet in June 2021 from images that were originally captured in 2014, when it was more than 2.7 billion miles (4.4 billion km) from the sun.

The size of K2’s nucleus is still up for debate, and was initially estimated to be between 9 and 50 miles (14 and 80 km) by the Canada–France–Hawaii Telescope.

However, further observations with the Hubble Space Telescope indicate the nucleus should be a maximum of 11 miles (18 km).

To put this into perspective, Mount Everest is less than half the size at 5.5 miles (8.8 km). 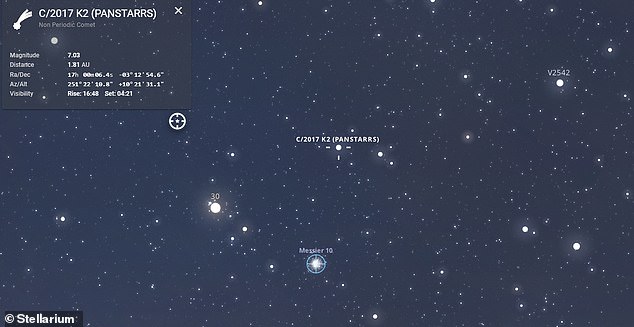 A screenshot from Stellarium showing the predicted location of comet C/2017 K2 in the sky at 04:09 BST on July 14, relative to some other markers in the sky including Messier 10 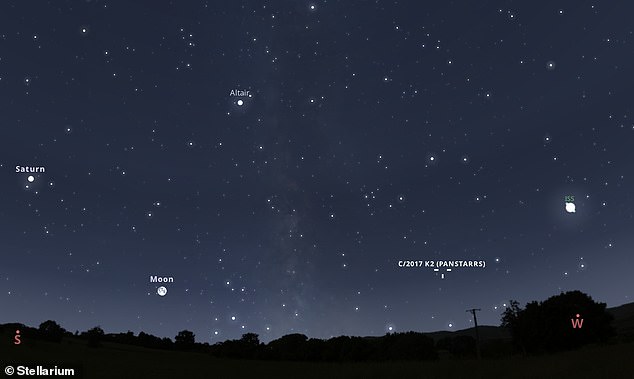 A screenshot from Stellarium showing the predicted location of comet C/2017 K2 relative to the southwestern horizon from the perspective of someone in London at 03:09 BST on July 14 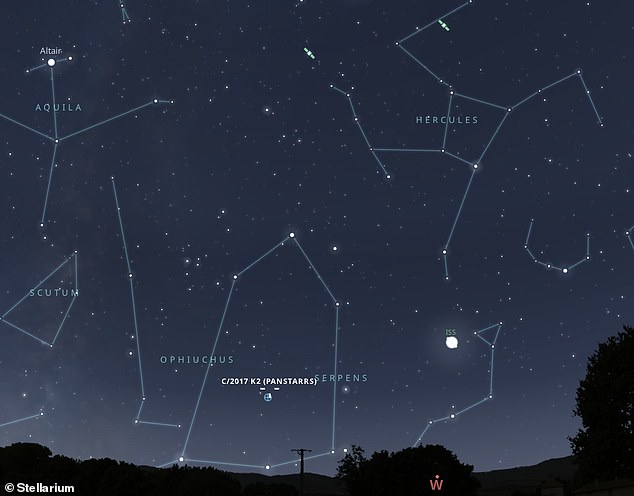 WHEN CAN I SEE THE SUPERMOON?

The supermoon will be visible in the UK after it rises at the following times:

It will reach the perigee at 09:08 BST, and have peak illumination at 18:37 BST (14:37 ET), but as this is still in daylight hours it will not be visible to stargazers at those times.

Comets are made of rock and ice, and become active when they are warmed by the sun to produce a sphere of gases, known as a ‘coma’.

As K2 has yet to approach close enough to the sun for a significant amount of ice to sublimate, its coma is thought to be made up of a mixture of substances.

These could include nitrogen, carbon dioxide, carbon monoxide and molecular oxygen as well as ices.

Unfortunately, astronomers won’t be able to verify the size of the comet tonight, as it will still be farther away from us than Mars is.

The darker it gets, the better the comet’s visibility will be, although the skies are due to be lit up tonight with an unusually bright supermoon.

The comet should continue to brighten as it approaches the point where it will be closest to the sun on December 19 2022, before re-entering deep space.

However, it is unlikely to ever be visible to the naked eye as, despite the proximity to the sun and the resulting ice sublimation, it will be too far away from Earth and will produce too much dust.

Tonight is also due to be the biggest full moon of the year, of the three that have appeared so far. 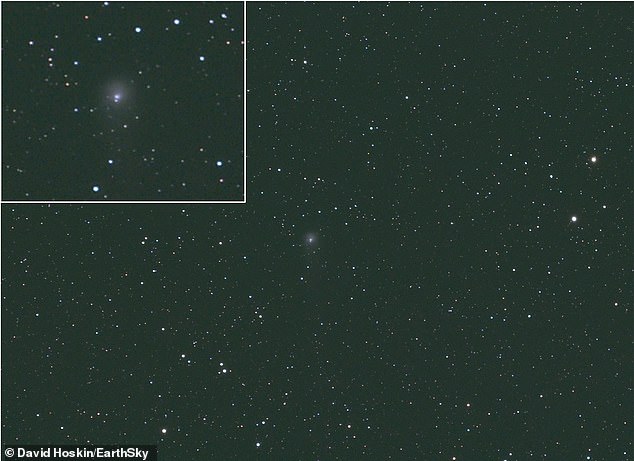 An astrophotographer took this image of K2 from his backyard in Halifax in Nova Scotia, Canada last month. It took over 15 minutes for the photons from the comet to reach his camera

Stargazers in the UK will be treated to the spectacle any time the sky is clear between sunset tonight and sunrise tomorrow.

A supermoon occurs when the full moon nearly coincides with perigee – the point in the orbit of the moon at which it is nearest to the Earth.

Its proximity bolsters its brightness and size in the night sky from our planet, while on the moon it would appear the same as normal.

Anna Ross, a planetarium astronomer at Royal Museums Greenwich, said: ‘As a supermoon means that the moon is a little closer to us, it will appear slightly bigger in the sky.

‘The apparent difference between the size of the full moon at its closest and farthest points is only around 14 per cent and, although if you were on the moon its brightness wouldn’t change, being that bit closer. 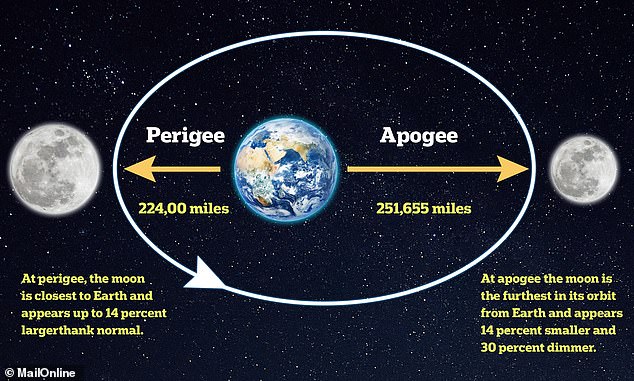 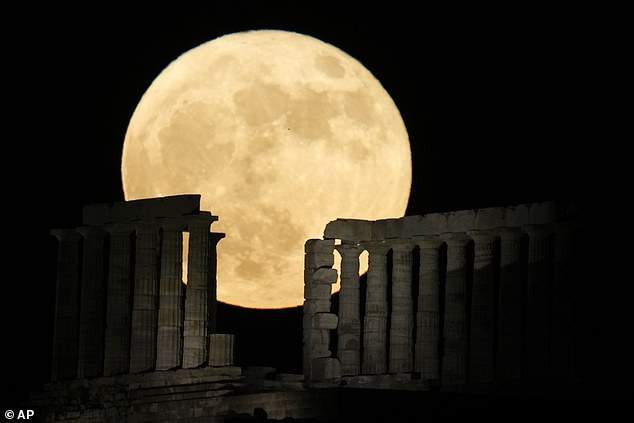 On the evening of June 14 2022, the last supermoon lit up skies around the world, as our lunar satellite appeared 17 per cent larger and 30 per cent brighter than usual

‘It also overall appears to be around 30 per cent brighter to us here on Earth.

‘As long as the night is clear of clouds it will be easy to spot whether you are in a light-polluted city or a dark area of countryside.’

As this is still during daylight hours and before the Moon has risen from our point of view in the UK, the best time to see the Buck Moon will be this evening.

It will rise over London at 21:48 BST, Edinburgh at 22:35 BST and Plymouth at 21:24 BST, so stargazers should keep their eyes peeled for the best view from then. 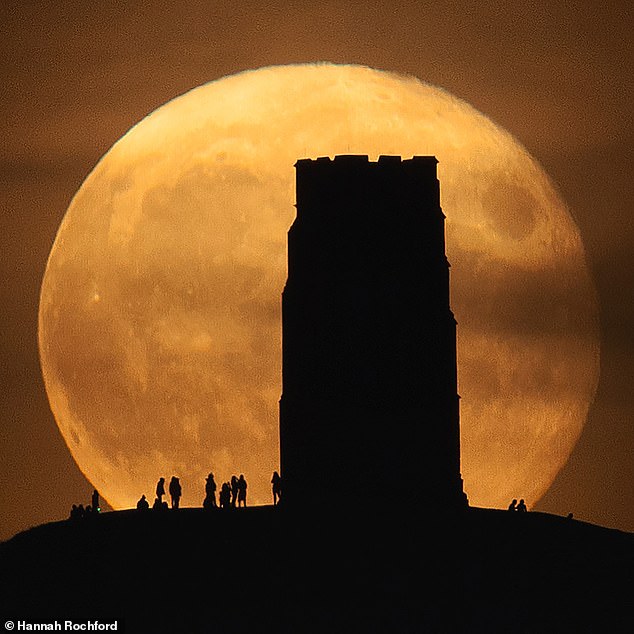 A supermoon occurs when the full moon nearly coincides with the point in its orbit at which it is nearest to the Earth. Pictured is a full moon rising behind Glastonbury Tor in September 2021

July’s full moon is known as the Buck Moon in a traditional naming system developed by early Native Americans.

Their system uses the different months’ full moons as a calendar to keep track of the seasons.

The seventh full moon of the year was named the Buck Moon because male deer shed and regrow their antlers around this time of year.

The next supermoon will be visible on August 12.

A FULL MOON  is the phase of the moon in which its whole disc is illuminated.

Because our modern calendar isn’t quite in line with the Moon’s phases, sometimes we get more than one full Moon in a month. This is commonly known as a blue moon.

Meanwhile, a SUPERMOON  is when the full moon nearly coincides with perigee – the point in the orbit of the moon at which it is nearest to the Earth.

This means a supermoon can appear as much as 14 per cent larger and 30 per cent brighter than normal, when viewed from Earth, depending on the time of year.

There are about three or four supermoons per year, most astronomy websites claim, and they happen at different times each year.

Lastly, BUCK MOON simply refers to the time of the year the full moon is appearing.

Different months of the year have different nicknames – so January is Wolf Moon, February is Snow Moon, March is Worm Moon, April is Pink Moon and July is Buck Moon.

Full moon names were historically used to track the seasons and therefore are closely related to nature.