Huge boost for rarest butterfly: The beloved ‘large blue’ was declared extinct in 1979, but now is back in Britain thanks to successful breeding campaign

With its mighty wingspan and dazzling colours, the large blue butterfly was an unmistakeable sight in the British countryside – before being declared extinct more than four decades ago.

But following a successful breeding campaign, it is fluttering freely on these shores once more.

The large blue butterfly was introduced in Gloucestershire last August after five years preparing an 867-acre site. Conservationists used eggs from Sweden, where the species has survived.

Some 1,100 larvae were released on the Minchinhampton and Rodborough Commons, owned by the National Trust.

An estimated 750 butterflies have successfully emerged this summer, and the team monitoring the scheme has recorded large blues flying further afield.

Key to the successful reintroduction has been encouraging the growth of wild thyme and marjoram, on which it lays its eggs, and creating the right conditions for a particular species of red ant that the butterfly’s larvae feed on.

The large blue, which had been declared extinct in Britain in 1979, has a remarkable life cycle.

The larvae act as parasites on the red ants, which they trick into carrying them into their nest. 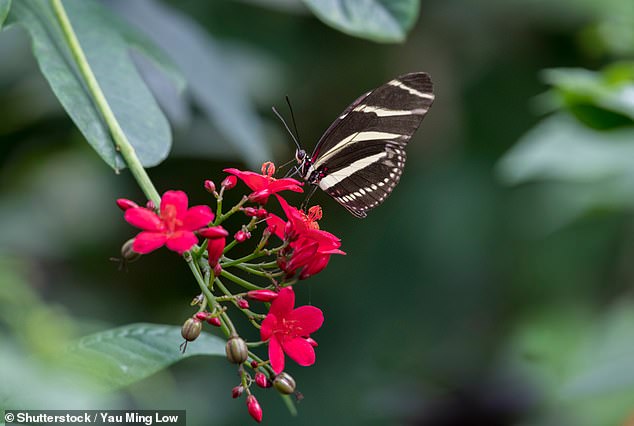 Once ensconced there, the caterpillars feed on ant grubs before emerging the next year as butterflies.

The red ants are quite particular about the conditions they need to flourish, requiring the introduction of Hereford and Longhorn cattle to graze on the grass and keep it short.

David Simcox, a research ecologist, said: ‘The grazing cows create the ideal conditions for them by keeping the grass down so sunlight can reach the soil which gently warms it, creating perfect conditions for the ants, which are cold-blooded and therefore need warmth in order to actively scout for food throughout the spring, summer and autumn.’