This is the moment a youth riding an electric scooter was thrown across a car bonnet in a shocking collision.

Dash cam footage, recorded on June 26 in Huddersfield, shows the young rider hurtling out from a side road in front of the car.

The scooter races into the path of the driver, who has no chance of avoiding it, before the rider flies up onto the vehicle’s bonnet and is then thrown onto the road.

West Yorkshire police said no injuries were reported after the incident.

The scooter rider rolls off the bonnet after the collision in Beck Road at around 4.30pm on June 26 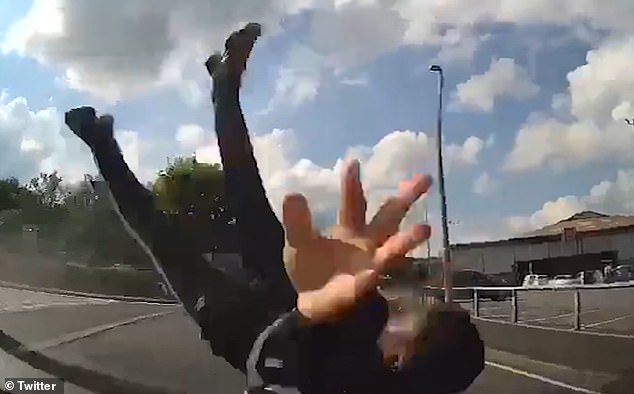 The 28 seconds of footage were recorded next to a retail park in the city’s Beck Road at around 4.30pm, when the male driver turns round the corner onto an open road.

He continues for less than two seconds before the scooter darts out in front of him, causing him to slam on the brakes.

He collides with the rider, who doesn’t appear to be wearing any protective equipment and is illegally riding the scooter on the road.

The young boy spins off the front of the vehicle and lands in a crumpled heap on the floor, appearing shaken but largely unscathed.

The two men in the car can be heard asking: ‘Is he ok? Are you ok?’ before going to check on the boy’s condition.

The driver points to the side junction from where the boy had suddenly emerged and speaks with him for a time while helping him off the road. 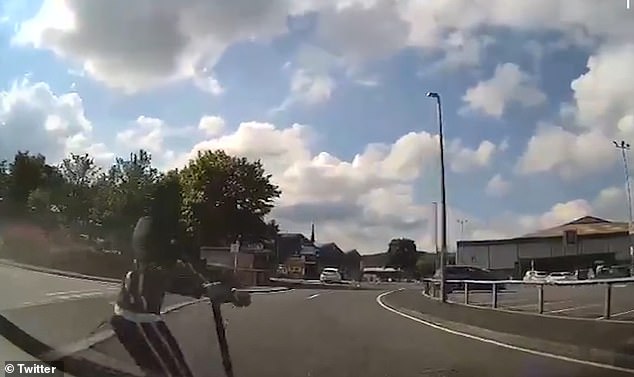 A spokesman for West Yorkshire Police confirmed the force was aware of the incident and said there were no injuries reported in the wake of the collision.

The footage has been shared online by several groups including Surrey police’s Road Policing Unit.

They posted it on Twitter with a caption stressing that privately owned electric scooters ‘are 100% ILLEGAL to use on public roads / pavements / parks unless part of the Government trial’.

E-scooters are banned from roads and pavements unless they are part of a trial rental scheme looking at their use and viability.

Riders face a £300 fine and points on any current or future driver’s licence for using them illegally.

Reported e-scooter casualties in London soared by more than 570 per cent in just a year – with the true increase likely to be far higher.

Figures show the number of riders injured in collisions in the capital leapt from 27 in 2019 to 181 between January and November 2020.

The number of pedestrians hurt by e-scooters doubled over the same period, from 13 to 26, according to data released under Freedom of Information legislation.

E-scooters made the headlines in July 2019, when TV presenter and YouTube influencer Emily Hartridge was killed while riding her e-scooter in Battersea, London.

She is believed to be the first person to die in the UK in an accident involving an e-scooter. She was later ruled to be riding too fast with an under-inflated tyre when she was tragically killed in a crash with a lorry.

Can you legally use an e-scooter on the road or on the pavement?

According to the Department of Transport, e-scooters are classed as ‘powered transporters’ and meet the legal definition of a ‘motor vehicle’.

They must therefore meet a number of requirements in order to be used on the road, including having insurance and conforming to ‘technical standards.’

Privately owned e-scooters are considered illegal to use on roads in Britain.

The Metropolitan Police has said riders risk being fined or even having penalty points added to their licence. Riders also risk having their e-scooters seized by police. 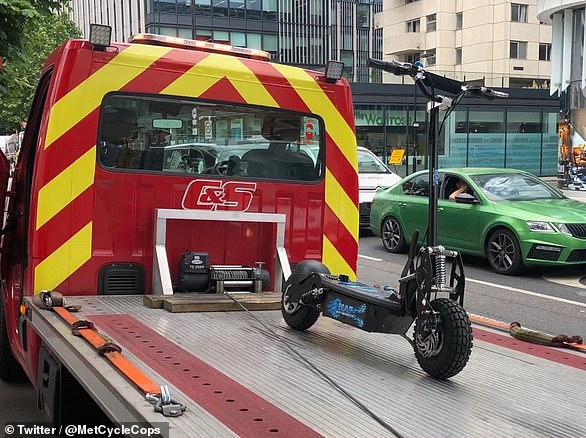 In May 2019, the Metropolitan Police ran an operation in London seizing e-scooters which were being illegally used on the city’s streets 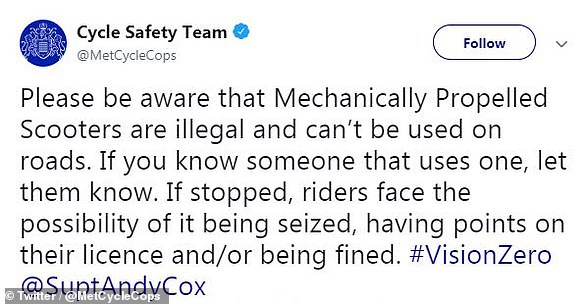 The ban does not apply to electrically-assisted pedal bicycles.

According to the Department of Transport: ‘For motor vehicles to use public roads lawfully, they must meet a number of different requirements. These include insurance; conformity with technical standards and standards of use; payment of vehicle tax, licensing, and registration; driver testing and licensing; and the use of relevant safety equipment.

‘If the user of a powered transporter could meet these requirements, it might in principle be lawful for them to use public roads. However, it is likely that they will find it very difficult to comply with all of these requirements, meaning that it would be a criminal offence to use them on the road.’

In July 2020 the UK Government introduced legislation trialling the use of e-scooters, through local authorities, for a period of 12 months via approved rental companies. The vehicles are capped at 15.5mph.  Around 20 locations are involved in the trial. Privately owned e-scooters cannot be used in the trial areas.

Privately owned e-scooters can be used on private land with the landowner’s permission.