Legendry musician Howard Blake was paid nothing upfront to write the music and lyrics of The Snowman.

Instead, the canny composer of the classic Christmas animation hung on to his royalty rights.

The 84-year-old now relies on his income from royalties to supplement his state pension and fund his lifestyle in Kensington, West London.

Legend: Legendry musician Howard Blake was paid nothing upfront to write the music and lyrics of The Snowman

He lives in a large studio flat with a 17ft ceiling and galleries, not far from Kensington Palace Gardens.

He tells DONNA FERGUSON that he isn’t interested in money, as long as he has enough to stay alive, eat and write music.

News about Howard and his autobiography, Walking In The Air Can Be Dangerous, are published on his website, howardblake.com.

Nothing, absolutely nothing. My father was a civil servant who worked at Shaftesbury Avenue telephone exchange in London. My mother had also worked as a clerk in the telephone service.

She stopped working after she had me and my brother. My father used to pay her £3 a week for housekeeping which, even back then, wasn’t very much. He was part of the Plymouth Brethren, a strict sect of Christianity.

Money was tight even though my father earned a good wage. He was just mean. He spent all the money he had on himself. With us, he used to buy everything second-hand, so nothing ever worked. 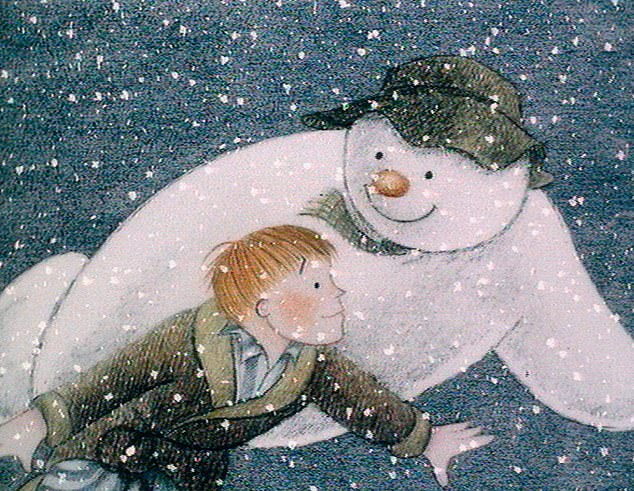 Classic: Howard Blake wrote The Snowman lyrics sitting in a deck chair in a park in four hours

When I was 13 all my friends got racing bikes. My father bought mine second-hand, even though he could afford a new one. When I rode it downhill, the brakes went. I crashed into a wall and broke my arm. I think my dislike of money and people just looking after themselves stems from a hatred of the behaviour of my father.

Yes, when I came out of the Royal Academy of Music. I needed to get a job and at first I couldn’t. I was 23. At one point, I worked as a doorman at a hotel in Brighton. I also worked as a waiter.

I was extremely interested in film as well as music. When I was 24, I got a job as a projectionist at the National Film Theatre, earning nine pounds, ten shillings a week. That was a fantastic job and while I was there I got my own film made and shown.

But even though I earned a good wage, I wanted to play the piano and the only place to play was in pubs. So after two and a half years as a projectionist, I got a job doing exactly that. From then on, I’ve made a living from music all of my life.

Ever been paid silly money?

I don’t make music for money. I make music because I love to make it.

It was 1967. I was getting by, playing piano in pubs and nightclubs, nothing special. I then started playing for singer Lisa Shane who had taken over from Barbra Streisand in Funny Girl. One day, I drove her down to Yarmouth to do a concert.

Her husband came along and it turned out he was a film producer who was making The Italian Job. He asked me whether I wanted to work on the film with him. I did. So I played piano for The Italian Job and did some arranging along with Quincy Jones. After that, I was signed up by a top agent to write music for movies. It was a life-changing year.

How did you get the job on The Snowman?

It was a result of a friend, Gerald Potterton. He was helping produce an animated film – The Happy Prince – about a little bird that flies to Egypt.

He sent me the script and I got to work on the music. But when I rang him to tell him I had a fantastic tune, which was in fact Walking In The Air, he said: ‘I’m terribly sorry, but they gave the job to somebody else.’

Eight years later, at lunch with Gerald, I met John Coates who made the Beatles’ animation film Yellow Submarine. He told me he had been offered a film called The Snowman, and he asked me to have a look at it – seven minutes long with stills. I watched it and said I might have just the tune.

Three days later, I had recorded it and when I played it to him, I told him that I wanted to develop the project into a half-hour film with nothing but music. John said: ‘Impossible.’ I told him to try Channel 4. Jeremy Isaacs, its founding chief executive, said: ‘This is brilliant, we will make it.’

At first, I wrote a complete score on the piano so that the animators could start their work. I showed it to a couple of friends and both said: ‘That bit when he’s flying in the air, you should put words to that, that’s got to have a voice. I realised they were right.

How much did you get paid for The Snowman?

When I was writing the music and lyrics, I was paid nothing. One does a deal, which is always royalty-based. I don’t know how much I’ve made from The Snowman. A gigantic piece of accounting would have to go on, which I suspect when I die, somebody will undertake.

I don’t buy things for fun, but my Steinway piano cost £9,000. I bought it from a friend who was hard up, so I gave him a good price. It’s a dark mahogany boudoir grand piano made in 1920.

I’ve made three major money mistakes in my life. My first, second and third wives. All cleaned me out.

Not marrying the fourth one.

No, I get the state pension and my royalties. Fortunately, royalties fund my lifestyle. I have three children and I give them money from time to time.

Yes. I own the lease on my home in Kensington, West London – a large studio flat which has huge rooms, a 17ft-high ceiling and galleries. It’s one minute’s walk from Kensington Gardens.

The one little luxury you treat yourself to at this time of year?

I enjoy a wonderful Christmas lunch from my favourite restaurant, HUX American Brasserie, around the corner. What I would like to treat myself to would be for my piano concerto, which I wrote for Princess Diana, to be played on the BBC.

If you were Chancellor what is the first thing you would do?

God help the nation if I was in charge of its finances! I don’t know anything about money. I’m only interested in music.

Yes. I donate to The Salvation Army. I think it is the genuine charity for poor people and gives them somewhere to live.

Staying alive and having enough money to eat.