As coronavirus sweeps across the UK, emergency plans are being drawn up that could see schools closed for at least two months.

And, with some children already being turned away in a bid to contain the virus, parents are finding themselves faced with the difficulty of knowing how best to tackle such a complex issue with their children.

British psychologists and doctors spoke to FEMAIL about the language parents should use when speaking to their sons and daughters about the virus, including how it can be described as ‘silly’ to children under nine.

The issue was also addressed on This Morning by TV psychologist Emma Kenny, who spoke about how statistics can be used to reassure older children about the potential dangers of the virus.

British psychologists and doctors shared their advice on the language parents should use – and avoid – when speaking to their sons and daughters about the virus. Stock image

START BY INFORMING YOURSELF

It sounds obvious, but parents need to be informed themselves about coronavirus before they even think about discussing it with their children, according to Dr Zoi Nikiforidou, a senior lecturer in early childhood studies at Liverpool Hope University.

Visit the Government’s Public Health England and NHS information pages and get yourself acquainted with the official, research-based advice.

Emma Kenny agreed, saying it will also help put your mind at ease, because statistically children are very unlikely to die from the virus.

She said: ‘I’ve informed myself so i know statistically that my children are really not at risk. They really aren’t and i actually know that most of us are not at risk.’

REMEMBER: CHILDREN SEE AND HEAR EVERYTHING

Dr Martina Paglia, Clinical and Counselling Psychologist and Clinic Director at the International Psychology Clinic (www.theinternationalpsychologyclinic.com), said: ‘If you are watching the news and your child is around, he has exactly the same information as you. The saying that children are like sponges absorbing the world around them is especially true of the emotional atmosphere that surrounds them.

‘No matter how hard we may try to conceal illnesses and death, children are sensitive to what surrounds them and are directly influenced by the way their parents feel about something. Therefore, if you are worried about it, your child will be too. As a parent, it’s important you learn to overcome your own anxieties to help your child face theirs.’

If your child is aged nine and under

MAKE THEM AWARE OF THE SYMPTOMS

Dr Jane Leonard said: ‘With children it’s best to keep things simple and ask them to let you know if they get a cough, feel hot or cold, or are not feeling hungry.’

How to explain school closures to your child?

Despite pleas from Health Secretary Matt Hancock not to close schools unless someone tested positive, the number closed entirely for the rest of the week reached double figures yesterday.

Among them is £19,000-a-year Dulwich Prep School in south-east London which blamed delays in NHS test results after several pupils fell ill after foreign holidays.

The issue is likely to attract a child’s attention and could become a talking point.

Dr Paglia advised addressing the issue from a protection point of view.

Dr Paglia: ‘Parents can explain that being off school and off work can protect children and adults from the silly corona virus, because if people stay at home the virus will be acting less messy.’

BE CONCRETE AND PRACTICAL

Dr Martina Paglia, Clinical and Counselling Psychologist and Clinic Director at the International Psychology Clinic, said: ‘Be concrete and practical with children under nine. Explain what they need to do to avoid catching the virus, such as washing their hands often and sneezing into a tissue, and then bin it right away.

USE LANGUAGE THEY CAN UNDERSTAND

Dr Paglia said: ‘Explain that the virus is very little and cannot be seen by humans but that scientists can see the virus using a microscope. Tell them that the virus is acting silly and likes people so much, that’s why it’s so popular right now.

DON’T BE AFRAID TO TALK ABOUT DEATH

Dr Paglia said: ‘Death is an essential part of our lives, it’s important to talk about it with children. After all, for everything in life there is always a beginning and an end.

‘Try to address potential fatalities in a way your child can understand and relate too. Also make sure you explain that the virus likes adults a lot but does not like children that much, so they should not be too worried about it.’ 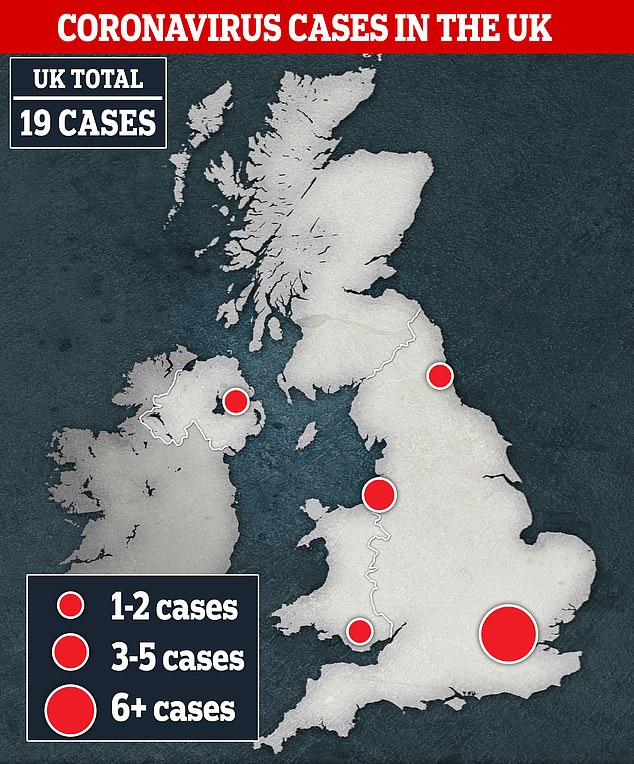 There are currently 19 confirmed cases in the UK – all of the individuals are currently located in hospitals dotted around the UK. Six new cases have been confirmed in the past 24 hours

If your child is over 10

ESTABLISH WHAT THEY KNOW

Emma Kenny said: ‘If they [your children] see any of these headlines [about the coronavirus], if they’re going to have any exposure, you’re going to need to have a conversation with them about it.

If your child is still young, try avoid using complex language ie. medical terminology and examples that he or she cannot easily relate to, suggests Dr Paglia.

‘One of the things you can do, is ask them what they know. What you don’t want to do is go “right, let’s just equip you with all the statistics and all the information”. Take it from their level.

Dr Paglia said: ‘For children 10+ ask them what they know about it and if they have any questions.

ENCOURAGE THEM TO THINK CRITICALLY

Jonny Pelter, internet safety expert and founder of UK-based SimpleCyberLife.com, the internet safety community for parents, said it is important for parents to help children question the coronovirus information being shared on social media.

He said: ‘The majority of children use social media sites and so parents should encourage their kids to think critically about the information they see online on the likes of Tik Tok, Facebook and Instagram.

‘Misinformation is being spread about the virus and if there’s anything that they see online that upsets or confuses them, parents should encourage children to communicate openly at home about it.’

If your child is a teenager

Emma Kenny said: ‘When you have a teenager, get real with them. Be authentic. Talk to them about the statistics and be honest about hygiene. We’ve got this massive coronaviris thrown at us in the press but the horror stories you read aren’t translating into statistics.

‘I think what we need is that honest conversation to say, “as long as you take care of your hygiene, as long as you recognise, that this isn’t going to effect you because under 20, there has been one death in the world [of someone that young].

‘You’re talking about the older aged groups that’s understandable, kids are going to be worried about their grandparents, that’s [another] honest conversation to be having with them.

What are coronavirus symptoms?

The signs of COVID-19, the infection caused by the coronavirus, are often mild and are very similar to a cold, flu or chest infection.

Typical symptoms of infection include a fever, a cough, and shortness of breath or difficulty breathing.

These are common complaints at this time of year, so where someone has travelled or who they have come into contact with are important in determining whether they might have coronavirus.

The NHS considers people to be at risk if they have the symptoms above and have recently travelled to mainland China, South Korea, Thailand, Japan, Hong Kong, Taiwan, Singapore, Malaysia, Macau, Vietnam, Cambodia, Laos, Myanmar, or the north of Italy (north of Pisa and Florence). 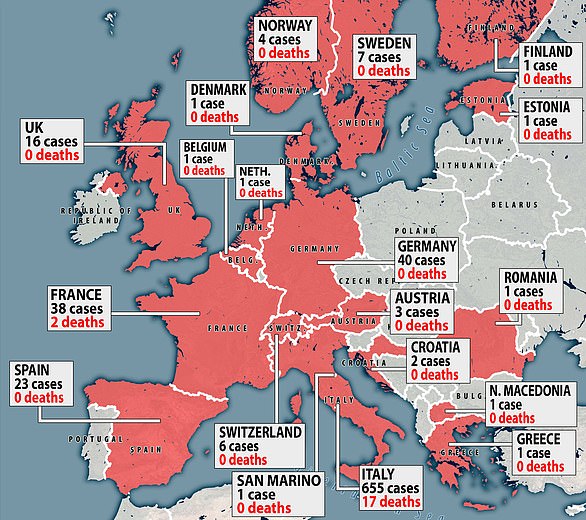 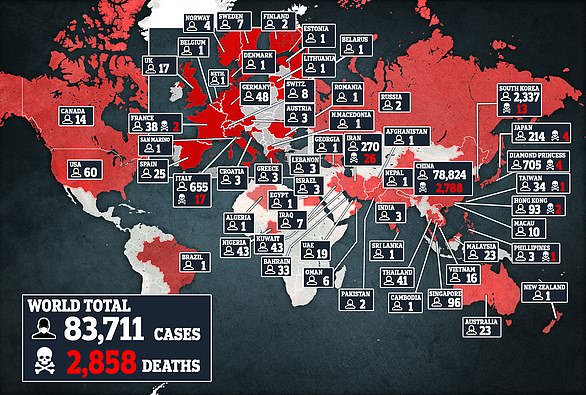 People who have, in the past two weeks, been to the Hubei province of China, Iran, the South Korean cities of Daegu or Cheongdo in South Korea, or one of 11 quarantined towns in northern Italy are considered to be at risk even if they feel well.

Those who have come into contact with others who have visited those places and then feel ill may also be at risk.

People who fit any of the categories above should stay at home and self-isolate, away from other people, and phone NHS 111 for more advice. If you think you have the coronavirus do not go to a doctor’s surgery or hospital.

The virus can spread through coughing, sneezing, or by being close to someone for prolonged periods of time.

To protect themselves, people should cough and sneeze into a tissue and throw it away, wash their hands and avoid contact with sick people.