Following her death yesterday, Her Majesty’s plans for her funeral in around 11 days’ time are being set in motion.

Her son, the new King Charles III, is likely to meet the Earl Marshal – the Duke of Norfolk – who is in charge of the accession and the Queen’s funeral, to approve the carefully choreographed schedule for the coming days.

The arrangements – part of Operation London Bridge – were first laid out in the 1960s and have been regularly updated since then.

The Government will also announce that the funeral day will be a public holiday in the form of a Day of National Mourning.

The period of Her Majesty’s coffin lying in state in Westminster Hall – where her father’s body lay for three days after his death in 1952 – is expected to begin on September 14.

The Queen’s state funeral is expected take place at Westminster Abbey in central London on September 19.

The original plans are for the Queen’s coffin to process on a gun carriage to the Abbey, pulled by naval ratings – sailors – using ropes rather than horses.

Senior members of the family are expected to poignantly follow behind – just like they did for the funeral of Diana, Princess of Wales and the Duke of Edinburgh.

The military will line the streets and also join the procession. Heads of state, prime ministers and presidents, European royals and key figures from public life will be invited to gather in the Abbey, which can hold a congregation of 2,000.

The service will be televised, and a national two minutes’ silence is expected to be held. The same day as the funeral, the Queen’s coffin will be taken to St George’s Chapel at Windsor Castle for a televised committal service.

Later in the evening, there will be a private interment service with senior members of the royal family.

The Queen’s final resting place will be the King George VI memorial chapel, an annex to the main chapel – where her mother and father were buried, along with the ashes of her sister, Princess Margaret.

Her husband Prince Philip’s coffin will move from the Royal Vault to the memorial chapel to join the Queen’s.

Below, MailOnline answers all your key questions about the funeral, and how you can pay your respects to Her Majesty.

When will the Queen’s coffin arrive in London?

Her Majesty is expected to remain at Balmoral until Sunday, when her coffin will be taken by road to the Palace of Holyroodhouse in Edinburgh.

Proclamations will be read in the Scottish, Welsh and Northern Ireland devolved parliaments in Edinburgh, Cardiff and Belfast.

On Monday, September 12, an emotional procession is expected along the Royal Mile in Edinburgh’s old town to St Giles’ Cathedral. It will remain there for at least 24 hours.

On Tuesday, Her Majesty’s coffin is expected to be flown to London, where it will first be taken to Buckingham Palace. Above: The scene at King’s Cross Station in London in 1952 when the new Queen watched her father’s coffin being carried from the Royal Train 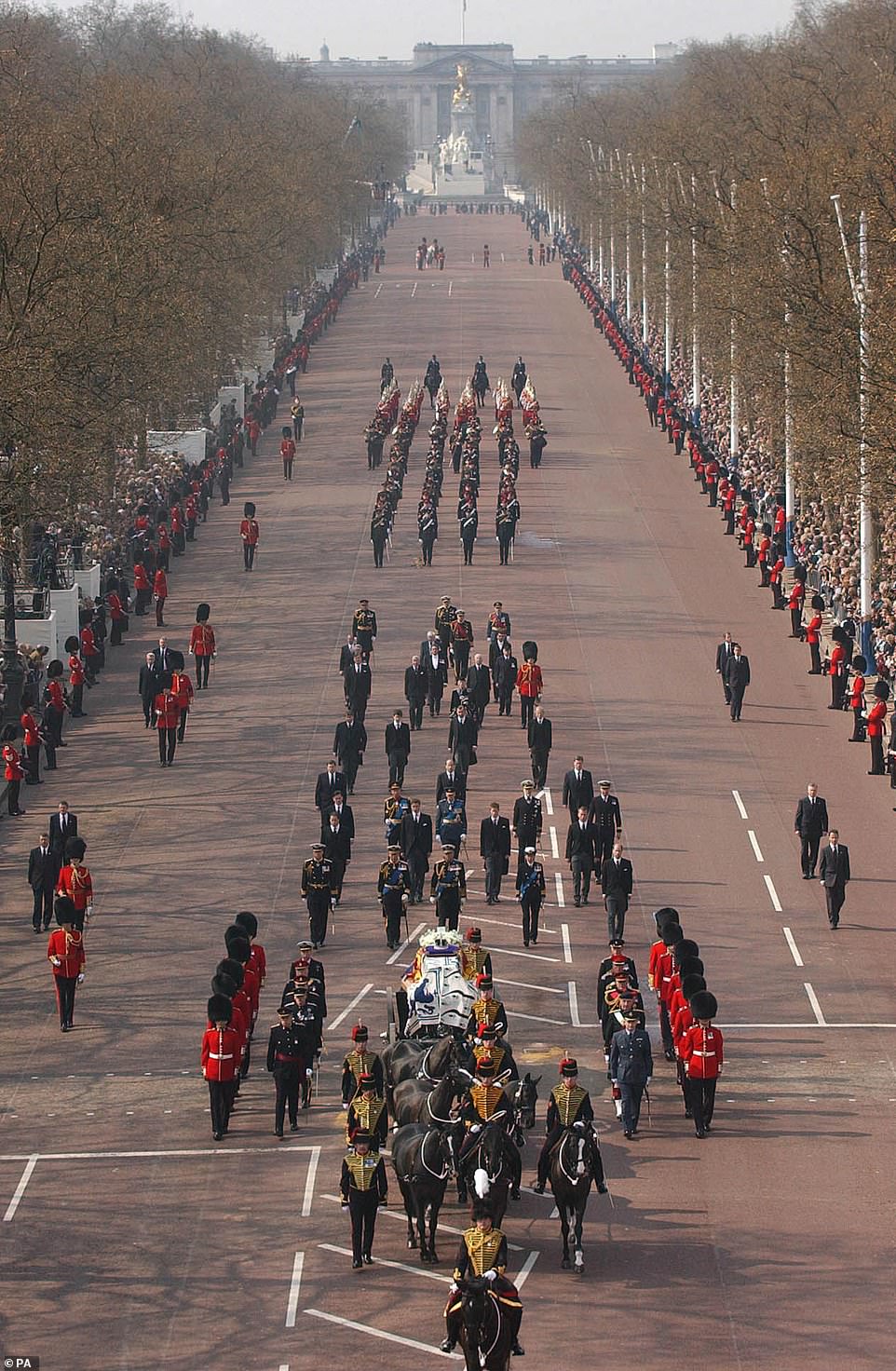 A view down The Mall in London of the procession carrying the coffin of Queen Elizabeth, the Queen Mother, from the Queen’s Chapel to Westminster Hall, where she lay in state until her funeral at Westminster Abbey

Members of the Royal Family will hold a vigil around the coffin in the cathedral.

The public may also get the chance to file past the Queen’s coffin at a mini lying in state in St Giles’.

On Tuesday, Her Majesty’s coffin is expected to be flown to London, where it will first be taken to Buckingham Palace.

A rehearsal for the procession of the coffin from Buckingham Palace to the Palace of Westminster then takes place.

How can I go to pay my respects?

A four-day period of the Queen lying-in-state in Westminster Hall will begin on Wednesday, following a ceremonial procession through London.

The Archbishop of Canterbury will conduct a service, before hundreds of thousands of people file past the coffin – resting on its catafalque – to pay their respects.

The scenes will echo those that took place when the Queen’s father King George VI died in February 1952. More than 300,000 people queued to file past the coffin.

The management of queues outside is known as Operation Feather. Senior royals are also expected to pay their own moving tributes and will stand guard around the coffin in a ceremony known as the Vigil of the Princes. 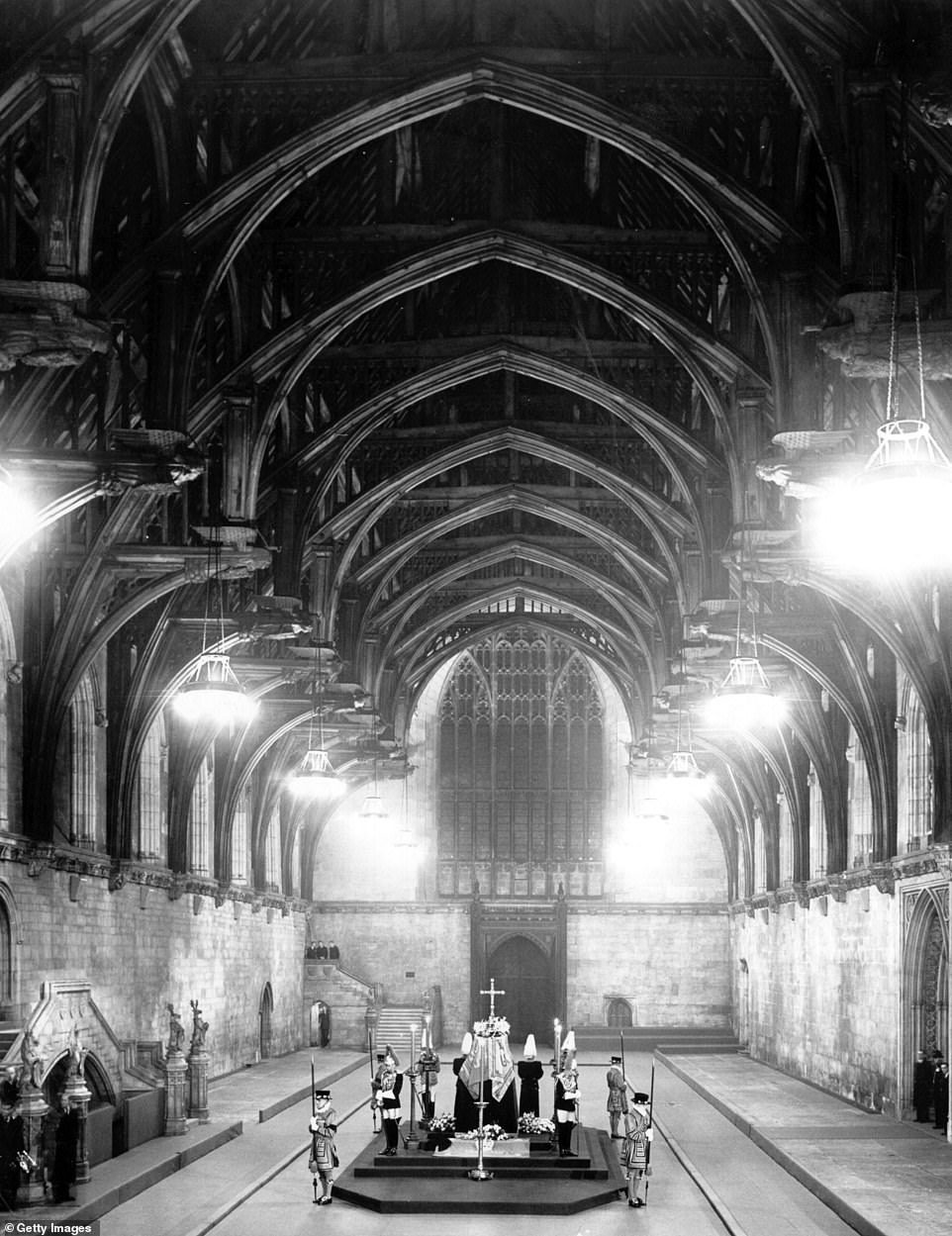 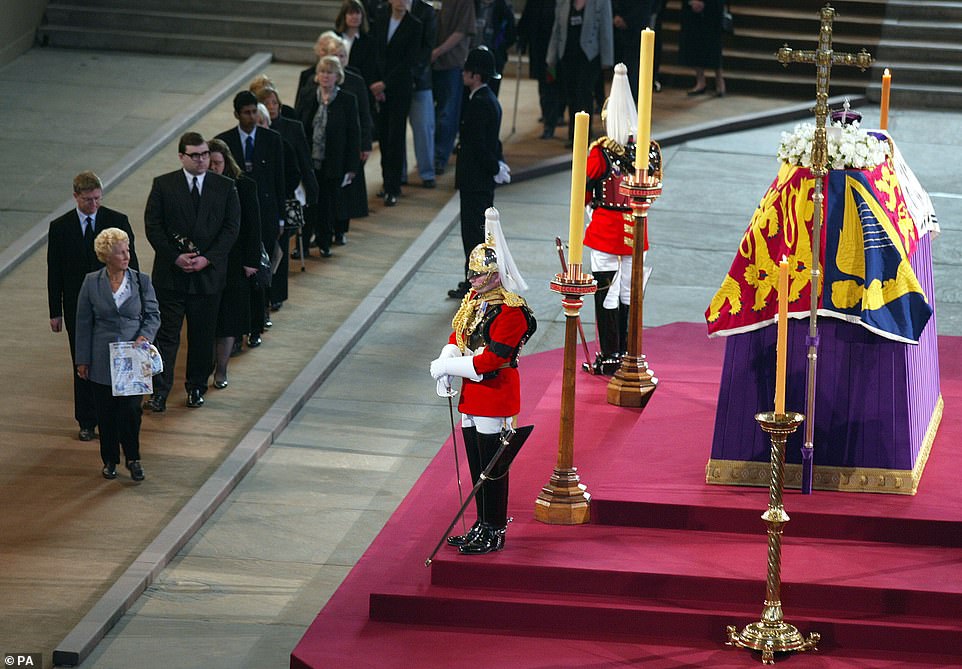 Mourners filing past the coffin of Queen Elizabeth, the Queen Mother, in Westminster Hall, where she was lying-in-state until her funeral at Westminster Abbey in 2002 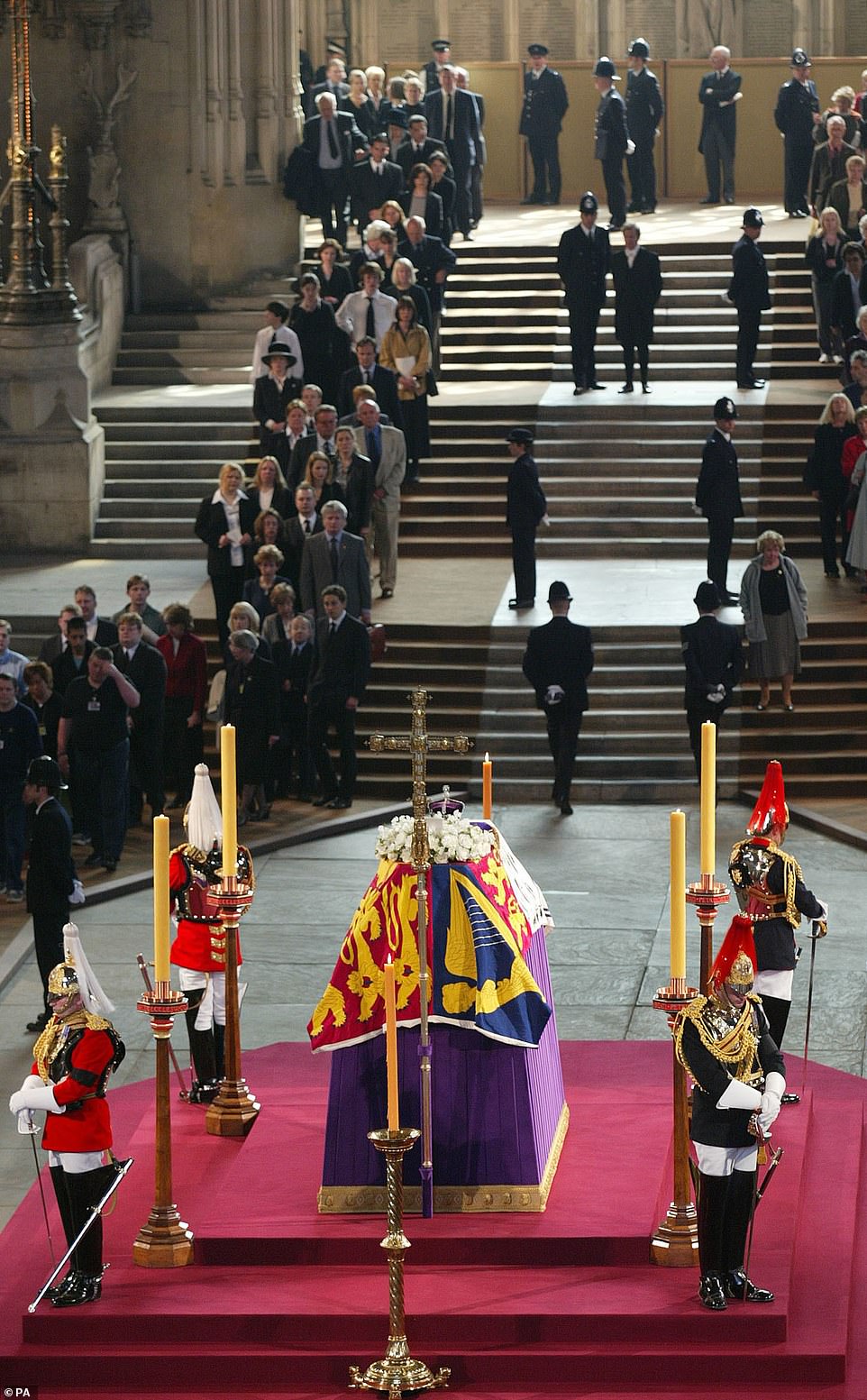 Crowds of mourners queue to file past the coffin of Queen Elizabeth, the Queen Mother, in Westminster Hall in April 2002 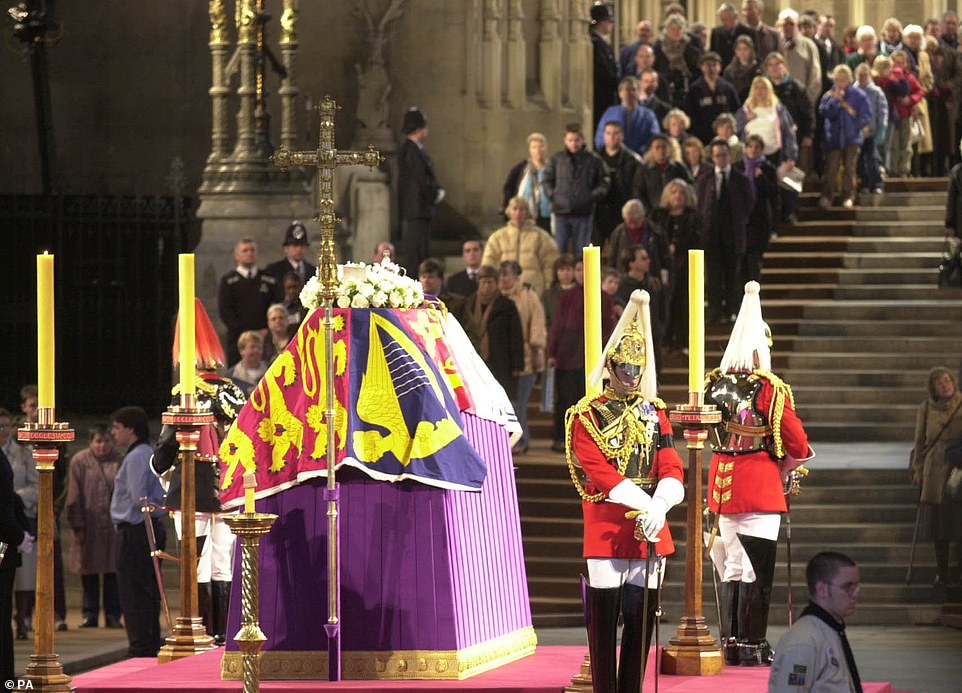 The Queen Mother lying in state in Westminster Hall in 2002. The scenes will be echoed when her Majesty lies in state from next week

What happens on the day of the Queen’s funeral?

Her Majesty’s state funeral at Westminster Abbey is expected to take place on Monday, September 19.

The last watch of the vigil in Westminster Hall will start at 6am, with the lying in state coming to an end at 8.30am.

At around 10.30am, the Queen’s coffin is expected to process from Westminster Hall to the nearby Abbey on a gun carriage pulled by Royal Navy sailors – using ropes rather than horses.

Senior members of the Royal Family will poignantly follow behind, just as they did for the funerals of Princess Diana and the Duke of Edinburgh.

Heads of state, prime ministers and presidents, as well as European royals and other key figures from public life will gather in the Abbey, which can hold a congregation of 2,000. 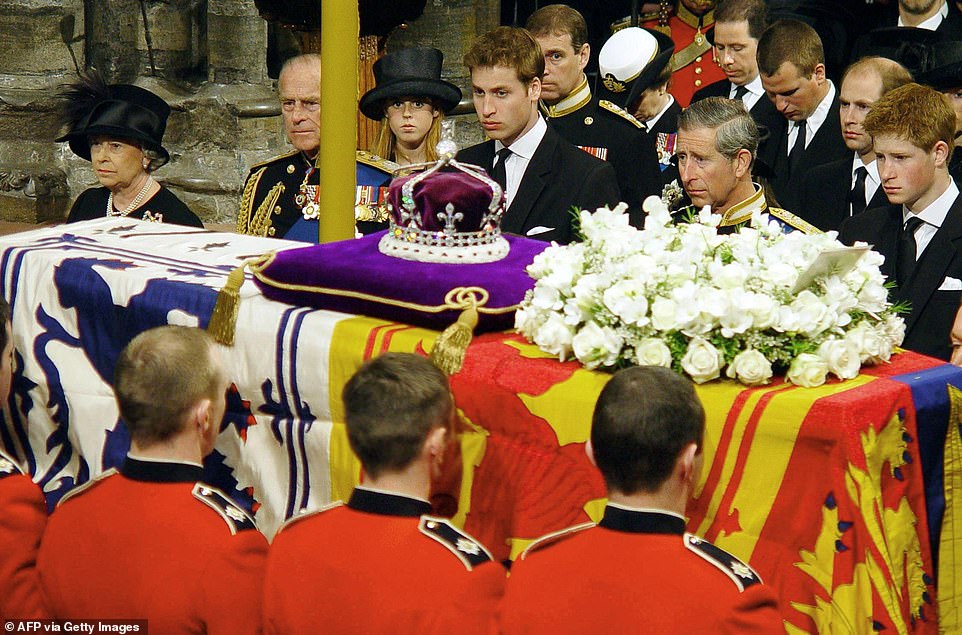 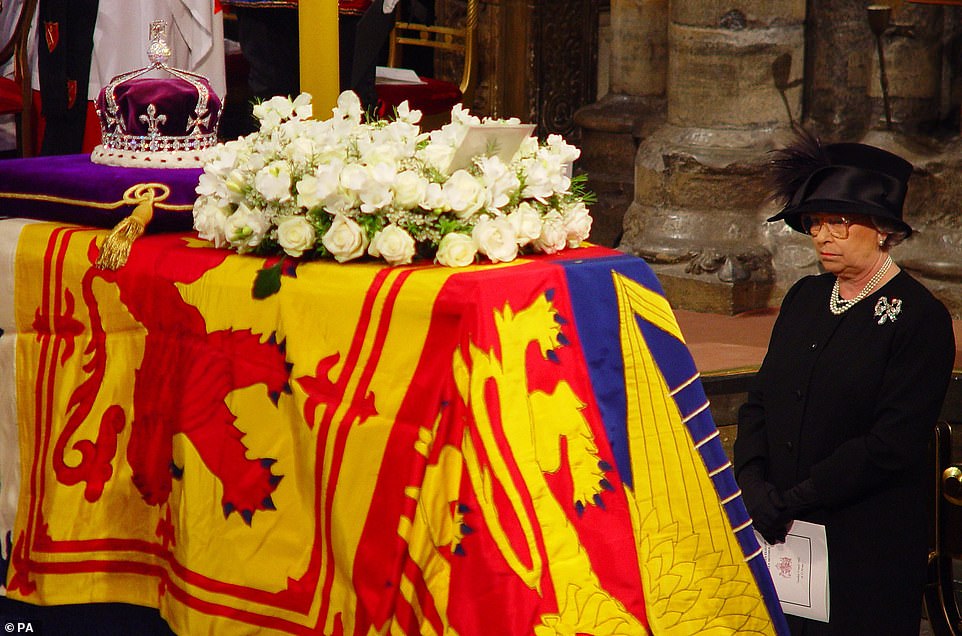 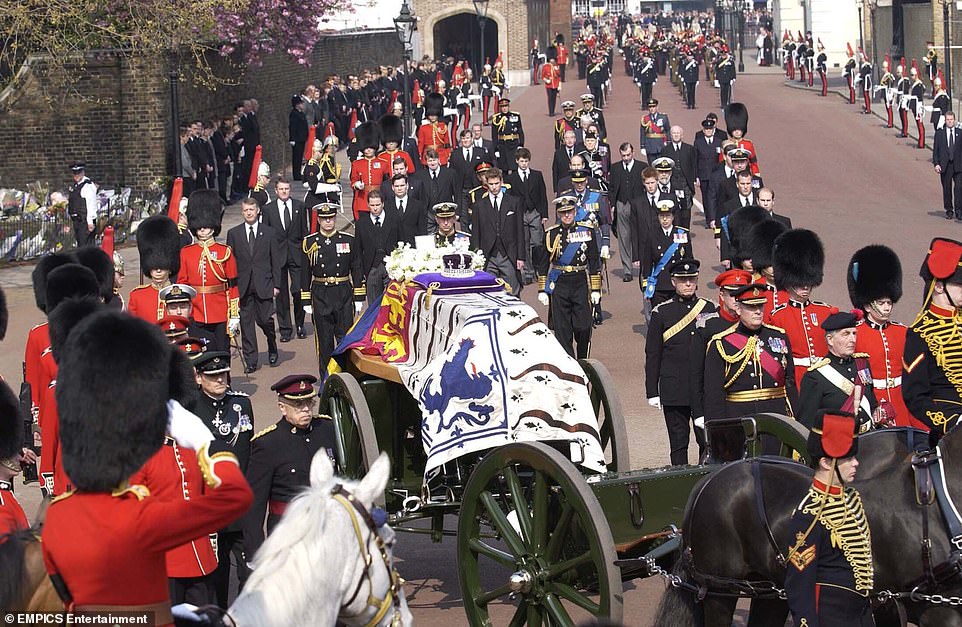 The Royal Family including the Prince of Wales, the Duke of Edinburgh, Prince William, the Duke of York and Prince Harry follow the Queen Mother’s coffin on the day of her funeral at Westminster Abbey 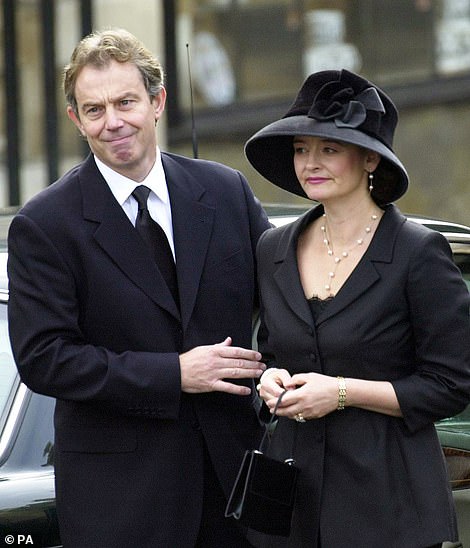 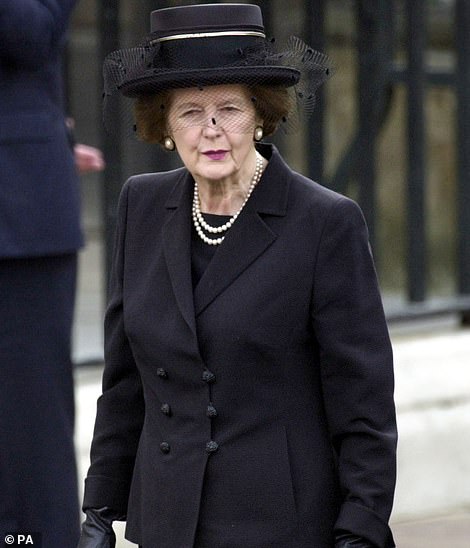 On the day of the funeral, heads of state, prime ministers and presidents, European royals and key figures from public life will be invited to gather in the Abbey, which can hold a congregation of 2,000. Above: The then Prime Minister Tony Blair arriving with his wife Cherie at the funeral of the Queen Mother in 2002 (left); former Prime Minister Margaret Thatcher at the service 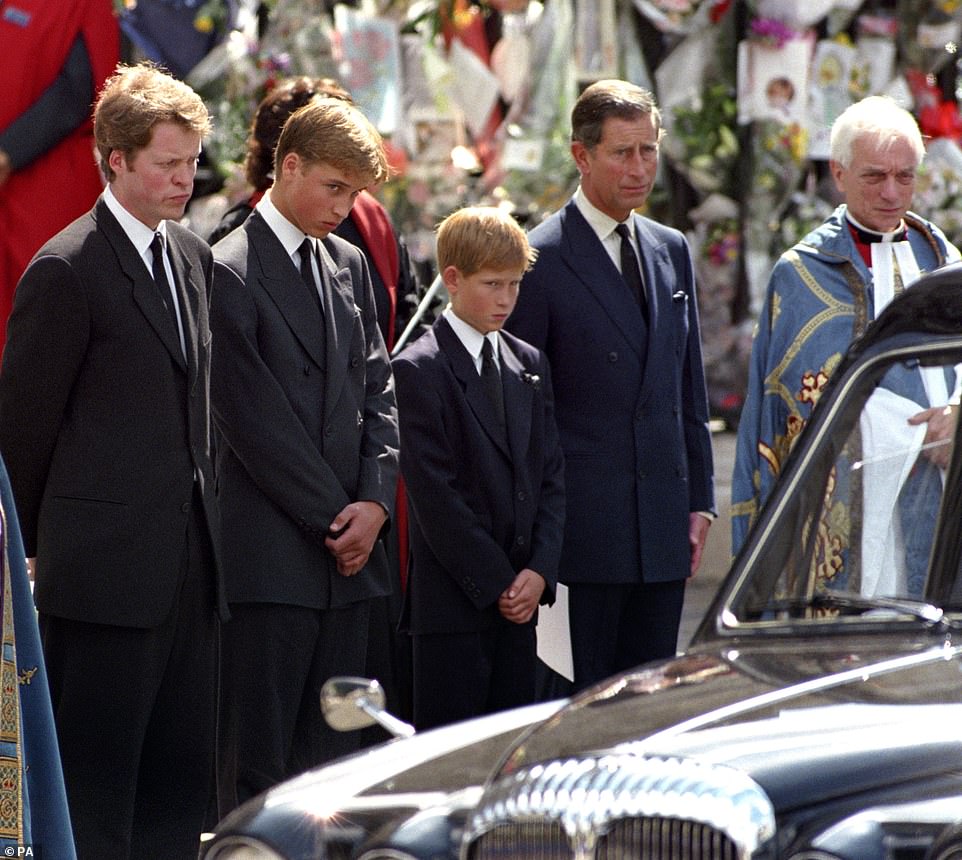 The Earl Spencer, Prince William, Prince Harry and the Prince of Wales waiting as the hearse carrying the coffin of Diana, Princess of Wales prepares to leave Westminster Abbey following her funeral service 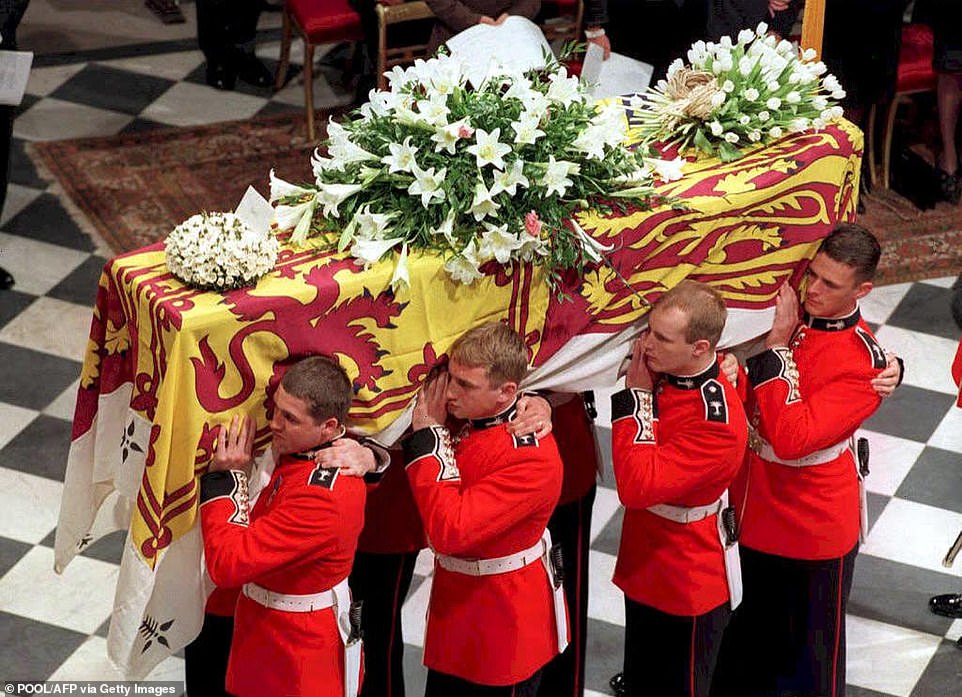 The coffin of Diana, Princess of Wales, is carried inside Westminster Abbey for her funeral service following her tragic death

What can I see on TV?

The service at Westminster Abbey will be televised on the BBC in the UK and on other channels around the world.

A national two minutes’ silence is also expected to be held during the service. Her Majesty’s coffin will then be loaded onto the green gun carriage that was used for the Queen’s father, his father and his father’s father, and 138 junior sailors will drop their heads to their chests and pull.

This is a tradition that began at Victoria’s funeral in 1901 when the horses threatened to bolt at Windsor Station and a waiting contingent of ratings stepped in to pull the coffin instead.

The procession will then swing on to The Mall and go past Victoria Monument, Constitution Hall and Wellington Arch. From Hyde Park Corner, the hearse will go 23 miles by road to Windsor Castle. 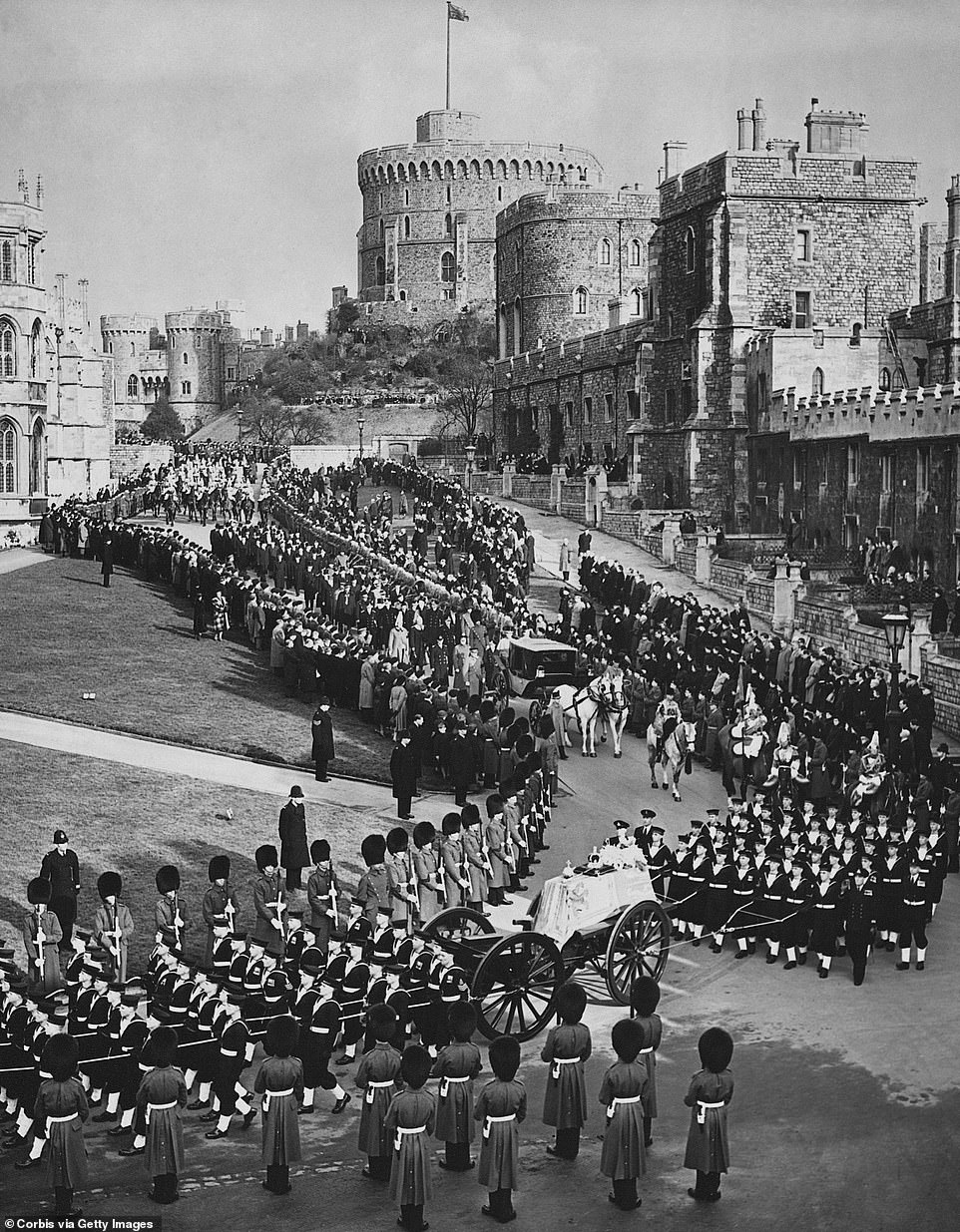 Once in Windsor, Her Majesty’s coffin will be taken to St George’s Chapel. Above: The funeral procession of her father, King George VI, as it moved through the grounds of Windsor Castle

Once there, Her Majesty’s coffin will be taken to St George’s Chapel, where a televised committal service will take place.

Later in the evening, a private internment service will take place with senior members of the Royal Family.

Her Majesty’s final resting place will be the King George VI memorial chapel, which is an annex to St George’s.

Her mother and father are buried there, as are the ashes of her sister Princess Margaret. Prince Philip’s coffin will also be moved from the Royal Vault to the memorial chapel to join the Queen.

The Cabinet Office said today that further details of the Queen’s funeral would be confirmed ‘in due course’.

The department also warned of crowding and delays on some public transport as people seek to pay their respects. 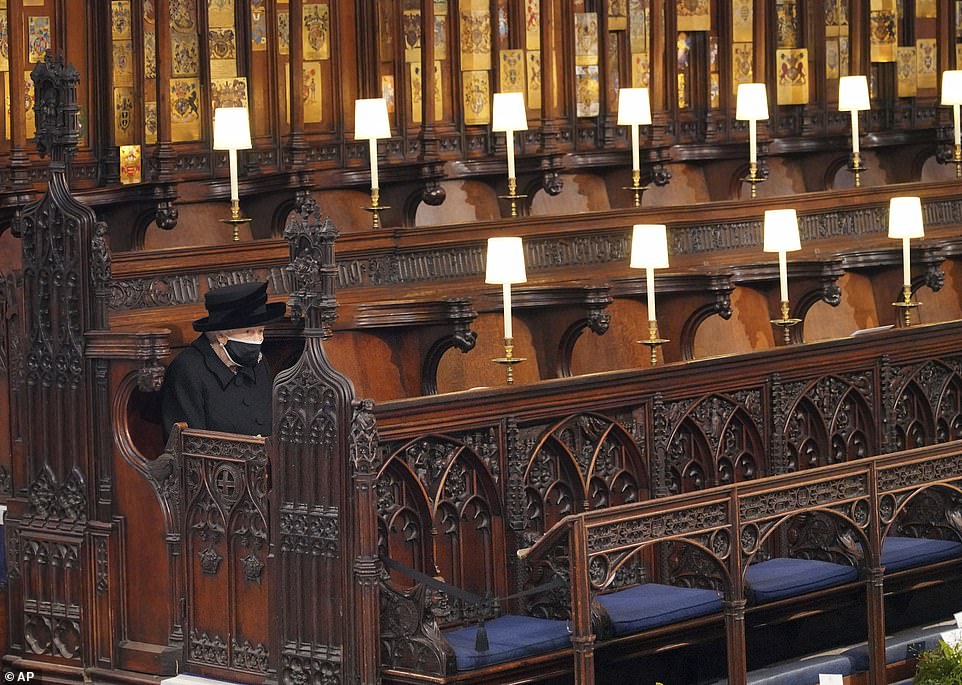 The Queen sits alone inside St George’s Chapel at Windsor during the funeral of her husband Prince Philip in April last year. The service took place during the coronavirus pandemic 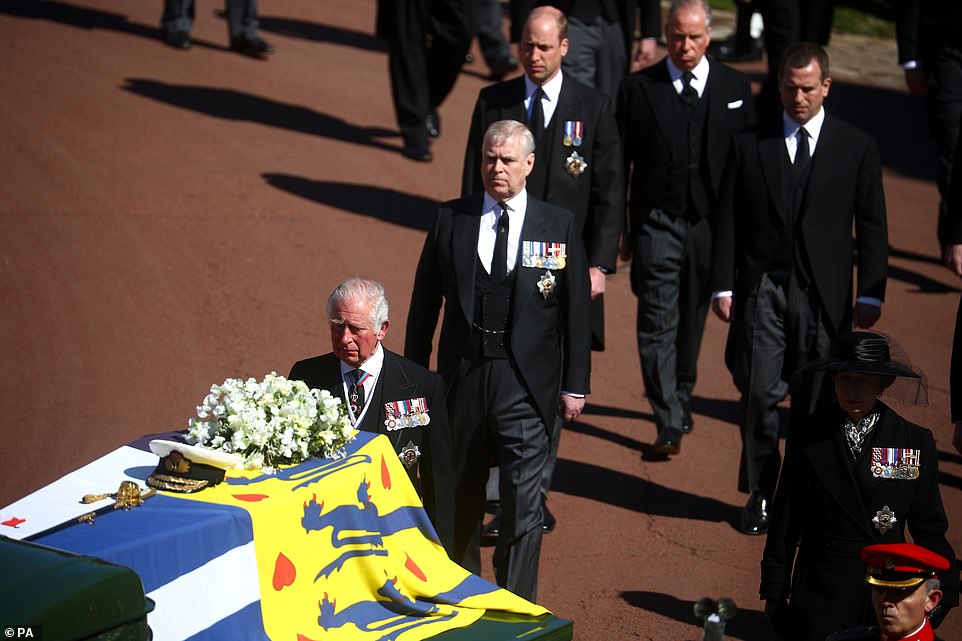 The Prince of Wales (bottom left), The Duke of York (centre) and The Duke of Cambridge (top centre) walk behind The Duke of Edinburgh’s coffin, covered with His Royal Highness’s Personal Standard, outside St George’s Chapel 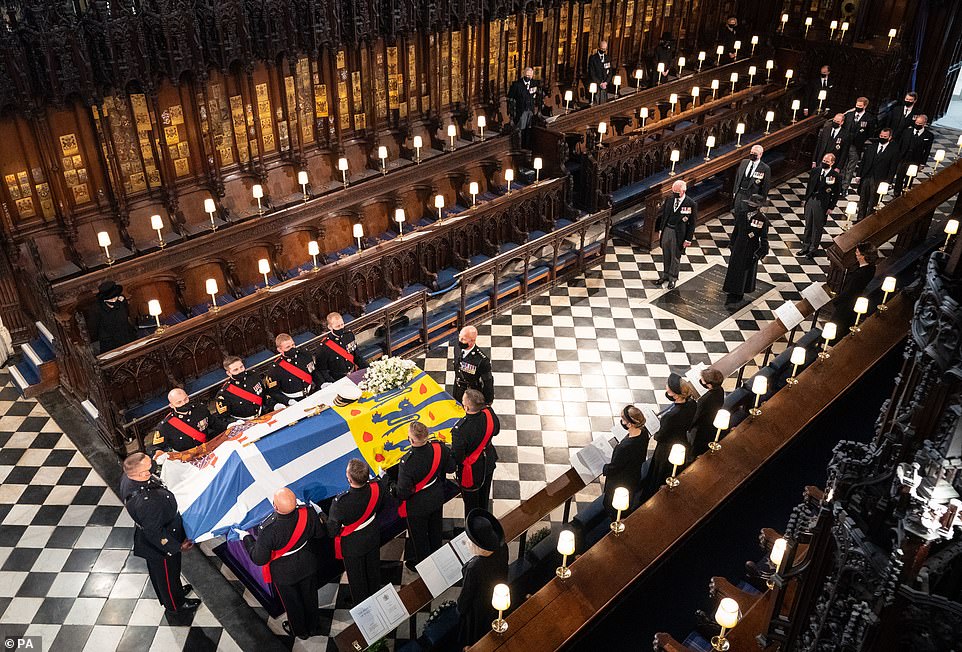 It said: ‘We recognise that many people will travel to Buckingham Palace and other royal residences as a mark of their respect.

‘We expect large crowds, which can pose risks to public safety. Those who do travel are asked to follow any instructions given to them by stewards and the police. We expect significant crowding and delays on some public transport. The public should check ahead and plan accordingly.

‘As you would expect, a number of organisations will now be making practical preparations including contingency planning for the state funeral and related events.

‘Access to some areas, especially in central London, will be restricted, with road closures and diversions that will cause delays to vehicles and pedestrians.

‘Those who wish to lay floral tributes near royal residences in London, Windsor, Edinburgh, Balmoral and Sandringham are asked to do so only in designated areas, as directed by stewards. Further details will be made available shortly.’