If you were told there are two beautiful family-friendly ski resorts with wide, uncrowded slopes, snow guaranteed until Easter, in different countries but just minutes away from the same international airport, you’d probably think you were hearing a wild fantasy.

In fact, with next month’s opening of the Scandinavian Mountains Airport, that will be a reality for British families heading for Salen in Sweden and Norway’s fabulous Trysil.

The gleaming new airport is in Sweden, a few miles from the snowy border with Norway. It was still under construction when I visited but I timed my journey from the terminal building to both resorts, and if you arrive on a morning flight from the UK, you can be on the slopes less than an hour later.

Off piste: A skier carves a turn in the mountains above Salen in Sweden

There are few places which offer that – unless you’re rich enough to arrive by helicopter. This also means that if you take an afternoon or evening flight home, you can ski on the morning of your departure – a whole extra day’s skiing added to your holiday.

As if to hammer home the message about the short transfer time, you can even travel to Salen – just ten minutes away – by dog sled. There is also talk of a chairlift linking the terminal to the ski area.

Until now, a three-hour flight to Oslo or Stockholm, followed by a two- or five-hour journey by road, took you to these ruggedly beautiful destinations.

In both we were astonished to find ourselves skiing on near-empty runs, enjoying the peaceful sound of song birds when we stopped for a break. Not once in six sun-drenched days did we queue at a lift, even though the resorts were filled with families from Britain, Denmark and Holland.

The secret is that while in the UK, schools break at Easter for at least two weeks, the locals get only one week – so if you plan your trip carefully, the slopes are all yours.

Trysil is Norway’s largest ski resort and centres around the Trysilfjellet mountain. There are 68 runs spread across 48 miles on four interconnected areas, ranging from easy greens to challenging blacks. 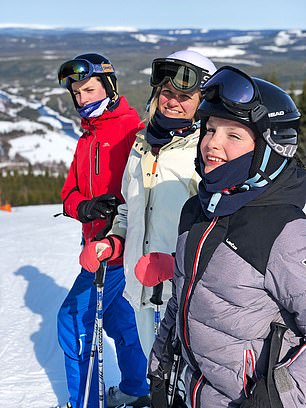 Spolit for choice: David’s wife Elizabeth and sons Thomas and Jack pose for a snap on the slopes

It’s a great place for youngsters to learn, but don’t be fooled into thinking all the skiing here is a doddle. World-class competitors head to Trysil for training and it’s thrilling to watch them as you trundle up on a button lift.

One unmissable treat is early morning skiing, when the snow is tinged pink by the rising sun, followed by the best breakfast you will ever eat sitting beside the fire at a cosy lodge nestled among the trees at Knettsetra, halfway down the mountain.

The Radisson Blu, where we stayed, dominates Trysil. It’s a 369-room hotel that, despite its size, has a cosy atmosphere with a pool, spa and – wait for it – a surfing machine! A pump drives a torrent of water up a slope and an instructor helps youngsters – the only ones with energy to burn at the end of the day – glide over it on body boards.

I preferred to wind down in the bar, and warm up by the stone fireplace at its heart.

Our rooms – one double and one twin for our two boys, Jack and Thomas – were simple, large and comfortable, with plenty of space to store wet ski clothes.

Across the border is Salen, in the Dalarna region of Sweden. It is made up of four ski areas: Lindvallen, Hogfjallet, Tandadalen and Hundfjallet, all connected by a free ski bus. Like Trysil, it has a range of skiing and is geared up for families.

There are more than 100 runs and three snow parks where our kids loved to show off their skills. The resort also has one of Europe’s largest nursery slopes in front of the SkiStar Lodge Experium in Lindvallen, our second base after leaving Trysil. 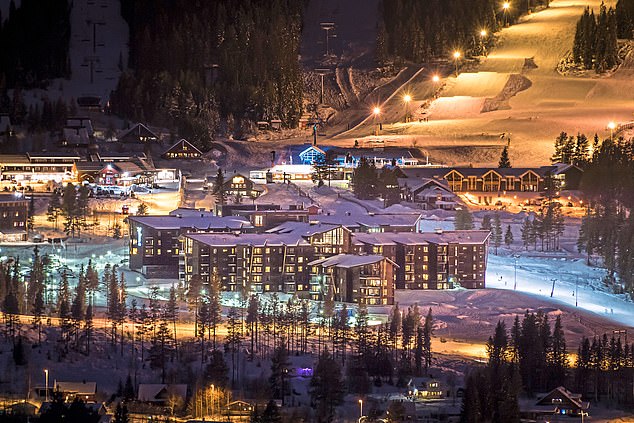 The hotel is more like a small town at the foot of the mountain. Guests sleep in apartments accommodating four, six or eight. Ours had bunk beds in one room for the boys, an adjoining room with a double bed, a living room and a dining area next to a modern kitchen.

There is a supermarket nearby and the hotel is packed with restaurants. O’Leary’s serves great burgers and has live football and other sports on big screens. At the more intimate Majkens Sylta, you can enjoy elk and local dishes.

The main attraction is the Experium leisure complex. It has a cinema, bowling and water park with slides and another surfing machine.

If you want some peace, the pool is reserved for adults early in the morning and the top floor spa is a haven.

The fact that the airport is so near may be great when you arrive – but on leaving, you are whisked away from these two idyllic resorts all too soon.

David Dillon stayed with ski resort owner and operator SkiStar (skistar.com). Four nights for a family of four start from €806 (£695) at the Radisson Blu, Trysil, and €718 (£620) at the SkiStar Lodge Experium. SAS flights from Heathrow to Scandinavian Mountains Airport start from £86 one way or £155 return.