EXPRESS INFORMER > Health & Medicine > How to give blood in UK: Where can I donate to NHS? What is my type?

Hospital trusts in England went into crisis mode today after the NHS issued its first ever amber alert for blood supply.

Supply of the universal blood type O are particularly low, making it difficult in emergency procedures and when the blood type of the recipient is unknown.

The alert will continue for at least the next four weeks and will not be lifted until stocks return to manageable levels.

If they continue to fall, a red alert may be issued, which would see only the most serious emergency operations going ahead.

Here, MailOnline explains everything you need to know about the situation.

NHS Blood and Transplant (NHSBT) declared its first-ever amber alert status because of the dwindling supplies. Current blood stocks stand at around three days, but levels of the universal blood type O negative have fallen below two days

What is an amber alert?

The NHS has an official traffic-light system for handling low levels of blood.

Currently England is at ‘amber’, which means hospitals must ‘reduce and prioritise’ blood use.

It could see elective surgeries, such as hip replacements, cancelled.

But urgent or emergency, cancer and transplant surgeries will all continue to run as normal for now.

Before today, the NHS was at the pre-amber stage. NHS staff were advised to be cautious of wasting stock and to try to hold back blood types that most likely run low.

The next stage, red, would force hospitals to ration blood supplies for emergencies only.

How much blood does the NHS have?

It aims to have at least six days worth of stock.

Levels of O negative blood have dipped below the two-day mark.

O negative is the universal type which can be given to everyone.

It is vitally important during emergencies and when the blood type of the recipient is unknown.

B positive, an important blood type for treating people with sickle cell disease, has 6.2 days worth of stocks, while A negative (7.12) and AB positive (9.94) are also both above the target.

Is the NHS short of platelets, too?

Meanwhile, blood platelet levels are below the one-day stock minimum for types O positive and A positive.

Platelets control bleeding in our bodies, so can be essential to surviving surgeries such as organ transplant, as well as fighting cancer, chronic diseases, and traumatic injuries.

Donor platelets are given to patients who don’t have enough of their own, a condition known as thrombocytopenia, or when a person’s platelets aren’t working correctly.

But substitutions are available for platelets when they are unavailable, unlike with regular blood stocks. 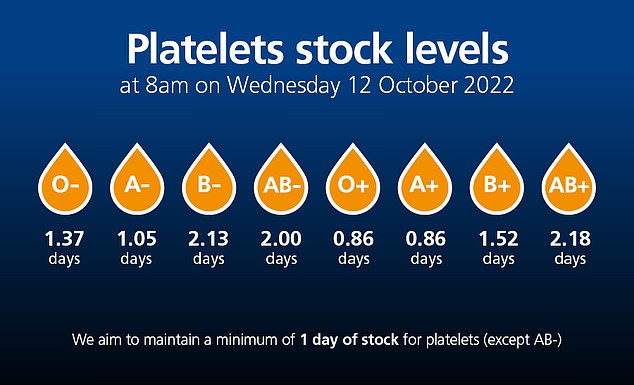 What does this mean for hospitals?

An email circulated to hospital bosses has told them to postpone elective surgery which is likely to require donor blood.

The emergency measure could see thousands of routine operations cancelled.

This could include joint replacements, which require adequate stocks of blood on hand in case a patient bleeds heavily.

Decisions will be taken by individual hospitals.

But hospitals might instead book in other surgeries, such as hernia repairs, gall-bladder removal and eye surgery, which do not require blood to be on standby.

Already about 6.5million patients are on waiting lists for such operations, with around 300,000 waiting at least a year.

Why are supplies low?

The current amber alert is also thought to be due to ongoing staffing issues, with more staff needed to work at donor sessions.

NHSBT claimed maintaining stocks has been a challenge in the wake of Covid, partly due to fewer people visiting collection centres in towns and cities.

But some donors also had their appointments cancelled more recently because of the lack of staff.

NHSBT say bookings have been dropped at the last minute because of Covid and other sickness absences. 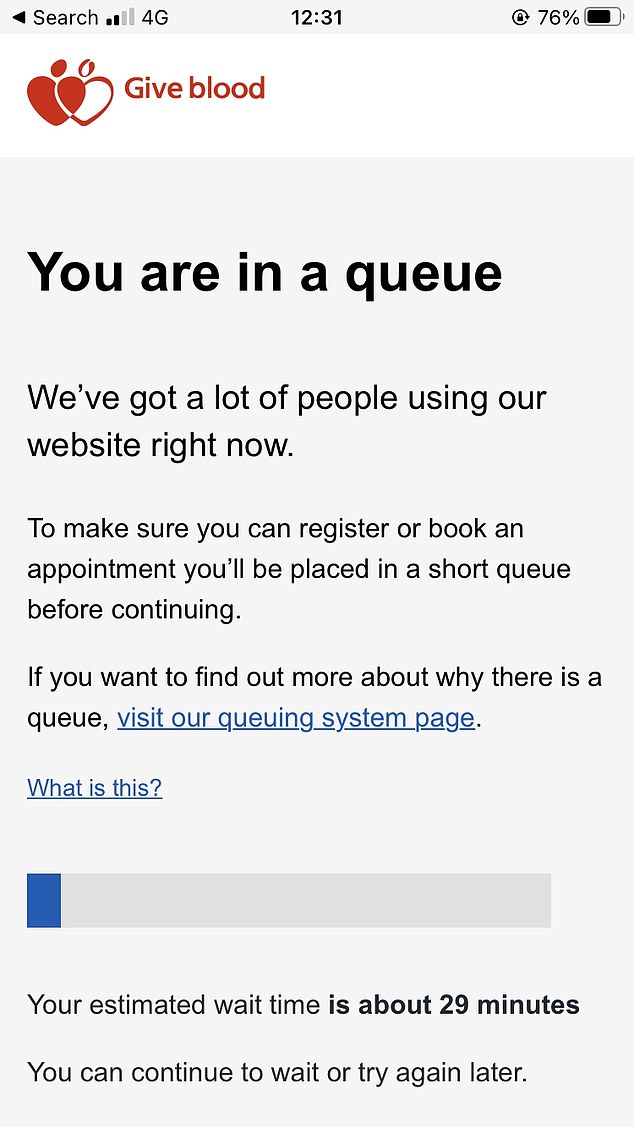 As news of the amber alert broke, the blood donor website became very busy, with people placed in a queue

An NHSBT spokesperson told MailOnline: ‘Unfortunately we have needed to cancel some appointments — sometimes at the last minute — because of staff sickness absence.

‘Ongoing staff shortage issues have been caused by accelerated turnover and the time it takes to recruit and train new colleagues.

‘This has left NHS Blood and Transplant vulnerable to short term sickness, which remains high due to increases in Covid cases.

‘This has led to unavoidable cancellations of high numbers of donor appointments, impacting collections and stock levels.’

Is there a potential solution?

Experts say one vital tool that could help procedures go ahead is being neglected in NHS hospitals.

A drug called tranexamic acid reduces major blood loss by a quarter when given before an operation.

The National Institute for Health and Care Excellence (NICE) recommends it is given to all patients undergoing major operations.

But an audit of 152 NHS hospitals revealed just two thirds of eligible patients were offered the £2-per-dose drug last year.

A report published in British Journal of Anaesthesia last month claimed giving the jab to all hospital surgery patients could prevent 15,000 major bleeds per year.

Lead author Professor Ian Roberts, one of the UK’s leading experts on blood loss at the London School of Hygiene and Tropical Medicine, said this could reduce the current and future strains on blood stocks.

He told the Mail On Sunday: ‘It makes perfect sense for doctors and patients. It is a cheap, low-risk intervention that will save tens of thousands of blood units, and lives.’

Currently, about 13,000 Britons die every year as a result of a major bleeding during surgery.

He added: ‘Not only do more doctors need to offer tranexamic acid, but we want every patient having an operation to know they can, and should, ask for it.’

How can I donate blood?

As news of the amber alert broke, the blood donor website became very busy, with people placed in a queue.

NHS Blood and Transplant said: ‘You can book an appointment to give blood as soon as you register as a blood donor.

‘However, the next convenient appointment might not be straightaway.

‘This could be because we already have a good supply of your blood type.

‘People need blood all year round so your donation will still save lives, even if your appointment is in a few months’ time.’

What happens when I donate?

When you are comfortable in the chair, a nurse will put a cuff on your arm to maintain a small amount of pressure during donation (this does not measure blood pressure).

They then examine your arm to find a suitable vein and clean it with an antiseptic sponge.

A needle will be inserted into your arm which will collect your blood into a blood bag with your unique donor number.

You should not feel any discomfort or pain. If you do, tell a member of staff.

A scale weighs the blood and stops when you have donated 470ml (or just under a pint). This usually takes between 5-10 minutes.

The needle will be removed and a sterile dressing applied to your arm.

Your donation is transported to one of our blood centres where it is tested and processed before being issued to hospitals.