With winter looming and restrictions likely to tighten soon, households are still looking for quick ways they can save money on their bills.

Searches on how to save money on energy bills and energy saving tips are at a 12-month high according to Google data.

One way to keep costs down is by saving money on your water bills, and a firm called Harvey Water Softeners claims that by making six small changes to home habits, households could save around £30 a year.

But are they really practical and would they save you money? This is Money puts to the test the six tips – and reveals how households can save even more money on their water bill through other methods.

1) Take a bath twice instead of three times a week: This is one of the more reasonable suggestions put forward by Harvey Water Softeners.

According to South East Water, the average shower uses 30 litres of water, compared to a bath which uses 80 litres.

Therefore, by showering instead of taking a bath, you will be saving water and thus, be cutting down on your bills.

2) Flush your toilet one time less per day: For many people, the idea of not flushing a toilet after usage is incredibly unpleasant.

However, about one third of the water we used is flushed down the toilet, according to South East Water.

The research showed that the average household flushes the toilet 35 times per week. It said that by reducing this to 28 times per week, people could save £4.57 a year.

For most this will not be worth leaving a toilet unflushed. Instead, a solution for those with a dual-flush cistern is to use the light flush where possible.

For those who have an old cistern, it could be worth fitting a water saving device such a Hippo Water Saver that helps conserve water in cisterns.

3) Skip showering one day per week: This step is one that most households will not be happy to take on.

In the age of coronavirus, the idea of being unhygienic and not washing regularly is even more off-putting than usual.

By showering six times a week instead of seven, households can save just £2.59 per year – a price nowhere near high enough to persuade homes to skip showering.

As detailed above, using a shower saves a lot more money than having a bath, meaning it is the most economically friendly way to wash.

Each washing machines cycle uses 100 litres, meaning the less washes you can do in a week, the better.

This is where some of the slightly larger savings come from as using a machine three times a week as opposed to four could save £7.57 a year.

Using a colour catcher, which stops colours running into each other, means households can combine light and dark washes to avoid doing more loads than usual.

5) Use your dishwasher once every other day instead of every day: Similarly, a dishwasher uses 50 litres for each cycle.

The data also showed that using a dishwasher three times a week as opposed to everyday could save households £7.39 a year.

It is tempting for households to use their dishwasher as much as possible to cut down on manually washing up items.

However, if you can stock it as full as possible before turning it on, you are likely able to save more.

Alternatively, filling up a bowl of water and washing up the old fashioned way is also likely to help you save on your bills. 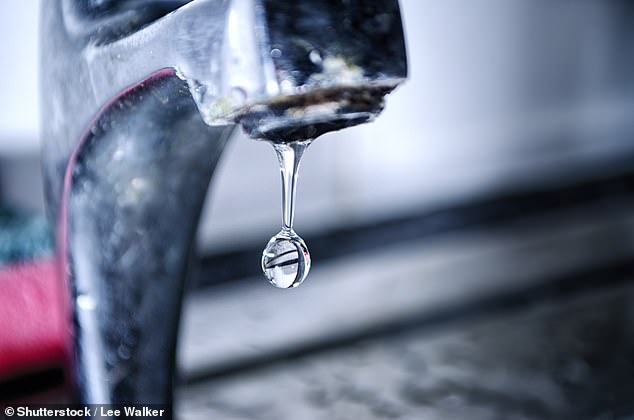 6) Boil your kettle once per day rather than twice: As many people are now working from home, boiling a kettle just once is not a reasonable solution.

Households are likely to want multiple cups of tea throughout the door, rather than lots in one half hour sitting.

It would also only save you a pitiful 76p a year by boiling once a day instead of twice.

One way households can cut costs, however, is to only put the amount of water they need in the kettle, rather than filling it up every time.

However, for those in the office, one tip to keep costs down, is to boil a full kettle and make everyone a cup in one go.

How else can I save money on my water bills?

There are plenty of tips and tricks for households who are serious about saving money on their water bills – that don’t include going without a shower.

1) Turn off the tap when brushing your teeth: This is a tip you were likely taught from childhood.

2) Fix leaking taps: A dripping tap can waste more than 60 litres of water a week so ensuring any leaks get fixed is essential.

Getting a LeakBot installed could help as it will alert customers on their mobile phones if they have any leaks in the home.

All they have to do is fit it to their pipes and the device will measure both the air and water temperatures in their home.

If they have a leak it will continually draw colder water from outside into their home, creating a consistent drop in temperature.

LeakBot can sense the prolonged and consistent drop in temperature and alerts you to the problem.

3) Ditch the hose pipe: A hose pipe can use up to 1,000 litres of water an hour. When you’re next washing your car, consider using a bucket and sponge instead.

4) Order a water butt: This is another way to save money when watering your garden. A water butt will collect rainwater you can then use to water your plants, saving you hundreds of litres of water a year.

5) Change the way you pay for water: Some people have a water meter while others pay a fixed price each year. Depending on your household one method might be cheaper than the other.

Many people opt for a water meter as it accurately calculates how much water a household is actually using – this is often most useful for smaller households.