Cleaning, cooking, raising the children and putting her husband’s every need first — it’s all in a day’s work for the rising number of women in their 30s and 40s who class themselves as a so called ‘Tradwife’.

Raised to believe they could have it all, they’ve had a go at smashing the glass ceiling but have since quit their careers for a more submissive life at home that has echoes of 1950s Britain.

Back then, with scant opportunities beyond the home, women had little choice but to be housewives, and many longed to cast off the shackles of domestic life.

Small wonder, then, that critics have denounced the Tradwife trend as the ultimate betrayal of feminism, claiming it panders to misogyny and the Stepford Wife stereotype.

Others believe that choosing to leave a career to be a housewife who’s reliant on her husband’s income is feminism in action.

We now spend our time flirting not fighting

Alena Kate Pettitt, 34, lives in Gloucestershire with her husband, a 48-year-old software programmer, and their seven-year-old son.

She’s spearheading the traditional housewife trend in the UK and is founder of The Darling Academy lifestyle blog. She says:

On a typical day, I’ll iron the shirts my husband’s chosen for the working week, while a beef stew simmers on the hob, and a banana cake rises in the oven.

Then there’s vacuuming, laundry and tidying to be done to ensure that the house is calm.

Far from being downtrodden and suppressed, Alena Kate Pettitt says her marriage is more playful since she became a Tradwife. She says: ‘We flirt more than we fight, because we’re both so happy’

I always tidy my hair, check my make-up, and spritz on some perfume that I know my husband loves — ready to greet him as he steps through the door.

It’s a sign of love and respect for my husband — and vital for my own self-esteem — as it shows him that I fancy him as much now as I did when we got together.

It keeps the ‘zing’ in our marriage; what man wants to be greeted by someone in tracksuit bottoms, or not at all?

I’ve been vilified for my 1950s style approach to being a traditional wife.

Yet it’s a choice and although I don’t advocate that every woman’s place is in the home, it’s time we celebrate the importance of the role for those that feel it is.

Far from being downtrodden and suppressed, my marriage is more playful since I’ve become a Tradwife. We flirt more than we fight, because we’re both so happy.

My generation grew up with the Spice Girls and a narrative that women should go out and smash glass ceilings.

At first I succumbed to the zeitgeist with a career in the beauty industry in London — but I wasn’t happy.

When I met my husband 12 years ago I secretly longed to be a homemaker. With strong traditional values of his own, he sensed this and said he could support us both if I gave up work.

But society dictated that without a career I’d be worthless, so I resisted for a while.

In the meantime we were both stressed and spent what little time we had together at home arguing over the chores.

Finally, in 2009, I accepted his offer, leaving my job and salary behind. Friends couldn’t compute why I’d give up my financial independence. But being a housewife is a career that’s allowed my family — and marriage — to flourish.

I’m certainly not an oppressed little woman at home. I’m actually quite feisty and this is my choice.

I know there are some extremists within the Tradwife movement, but for me it’s about taking the best parts of that golden 1950s age and applying them to a modern marriage — it’s worked wonders for ours.

What he says, goes, and that’s fine

Stacey McCall, 33, lives in Cheshire with her 36-year-old husband, who works in aviation, and their children aged ten and eight. She says:

A few weeks ago, my husband and I were trying to decide where to go for our summer holiday this year. I quite fancied the Canaries, but my husband was set on Cape Verde.

Did I stamp my feet and argue until I got my way? Of course not: we’re going to Cape Verde, it’s booked and I couldn’t be happier.

It’s only right that he gets the casting vote on our big expenditures; as the wage earner, he pays for it all.

Similarly, if we are making a big purchase, such as a new TV or computer, while he always values my opinion, the ultimate decision is his.

Does that make me an oppressed wife, who is setting back the feminist movement decades? That’s for others to decide.

All I know is that this set-up makes us very happy.

Stacey McCall says she and her husband both longed for a more traditional family life where she was at home with the children and did the chores, and her husband went to work

After having our children, I returned to work as a technical administrator for several years thinking it would be more manageable than returning to my former banking career. But we were all unhappy and stressed.

The children were always in after-school clubs, the house was a mess, we’d eat takeaways because we were too tired to cook, and my husband and I bickered and rarely had time for each other.

We both longed for a more traditional family life where I was at home with the children and did the chores and he went to work.

When he got a promotion and a salary increase in late 2018 I was finally able to become a Tradwife.

Forward 14 months and the house is tidy, the children are content, the marital squabbling has stopped and we eat homecooked meals every night. We flirt, we laugh and our marriage has never been stronger.

I provide structure and stability, and by putting my husband, children and home first, I keep stress levels to a minimum. He tells me the job I do at home is more important than any other.

I’ve also had the time to get involved with the local community — in the way women in the 1950s did — and helped set up a neighbourhood watch scheme.

Far from betraying feminism, being a Tradwife is empowering and has enabled me to take back control of my life.

The stress and anxiety of trying to hold down a career while also running a home and being an attentive wife and mother are long gone. Sometimes the old ways really are the best.

I manage the house so he can focus on his job

Since leaving my career almost five years ago to become a housewife, my marriage and family life have been magically transformed.

I fought against it at first, after we had our first two children. We’d always planned to have five kids and I was adamant I’d be the ultimate modern woman and juggle family with my career.

Laura Lightbody says her once chaotic home is a ‘well-oiled machine’. She says: ‘Tyrone arrives home to a calm house and the evenings are ours to enjoy’

But the reality of attempting to do that was awful.

Both exhausted from work, Tyrone and I would argue about everything from who was making dinner to who was most tired. The house was a mess, there was no routine and I felt guilty because I wasn’t being the parent, employee or partner I wanted to be — or anything near the homemaker my own mum was.

Increasingly I reflected on that, and when I was pregnant with our third child Tyrone and I agreed enough was enough. After working out our finances we made the choice that I’d become a traditional housewife and it’s been liberating as we now have two clearly defined roles.

My job is managing the home and our children, removing all of that stress so Tyrone can focus on his career.

I take my job very seriously, including devising a weekly meal plan of homecooked food so that there’s something nutritious on the table for my husband and children each evening.

I have a wall planner detailing Tyrone’s shifts and the children’s activities. Our once chaotic home is a well-oiled machine. Tyrone arrives home to a calm house and the evenings are ours to enjoy.

Although he’s the breadwinner, he respects my input and we discuss financial decisions and make them together. As a couple we’re happier and more respectful of each other than we’ve ever been.

But it’s important to me that Tyrone also gets to see me as a woman, not just a housewife and mother. I take pride in my appearance, wear light make-up, and do my hair.

We make a point of going out for dinner occasionally and I make a big effort then to wear stylish clothes and just be me again.

People said to me: ‘You’ll be bored!’ But how can it be a waste to invest time in my husband and children? True feminism is about choice and, as a Tradwife, that’s what I have.

I lost 8st and my man loves it

Sarah Dunkley, 32, gave up her teaching career in 2015 to become a Tradwife. She lives in Kent with her husband Ben, also 32, a prison services manager, and their daughters Eleanor, two, and Grace, five months. She says:

Since becoming a housewife I’ve worked really hard to make my husband happy — and my proudest achievement has been totally transforming my appearance.

Since handing over the reins to him, I’ve had time to go to the gym, eat properly and do my hair and make-up. In fact, I’ve lost more than 8 stone.

Yes, I did it for me, but I adore how much Ben loves the new me. He often comments he’s got an entirely new wife at home.

What husband — or wife — wouldn’t want that? It was all so different when I worked 14-hours a day as a teacher. 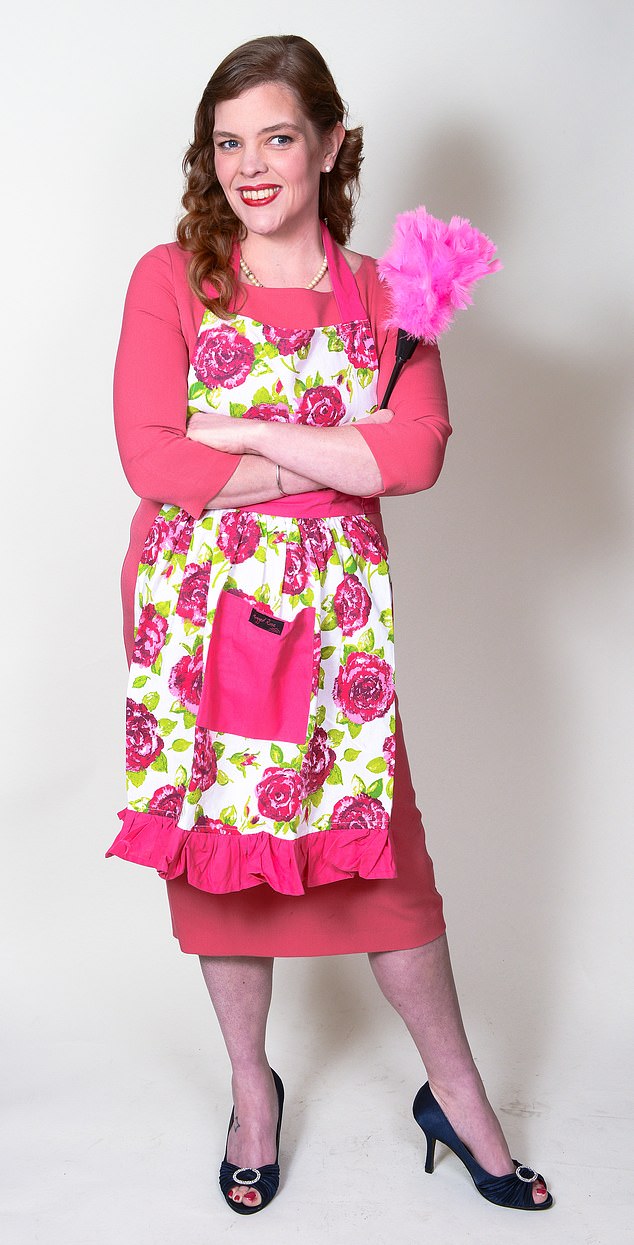 Sarah Dunkley says friends are perplexed that she is a housewife. ‘But I’m not downtrodden, this is my choice and it’s been the making of our family’, she says

Overweight, exhausted and resentful, with barely any time for my husband, I longed to be a housewife and do things ‘properly’.

When we bought our house and decided to start a family, we both saw it as the right time for me to make the switch.

Two months before I became pregnant in 2015, I gave up my career and threw myself into being a homemaker.

Although I briefly felt conflicted about the time I had spent on my education — ultimately it wasn’t a hard decision.

Plus, we’re incredibly fortunate that Ben earns enough so that we can sustain the lifestyle we want to.

In return for Ben’s financial support, I feel a huge responsibility to keep a lovely home that’s a tidy and stress- free environment for him.

He always greets me with a kiss, and I love hearing about his day. Both our mums were housewives who were responsible for domestic life and prided themselves on reducing stress for our fathers. I want that for my husband, too.

Now, my days are spent being attentive to our daughters, playing with them and taking them to activities.

I ensure the house is clean and tidy, and my husband’s favourite foods — always homemade — are ready to eat when he gets home.

Friends are perplexed that I’m a housewife. But I’m not downtrodden, this is my choice and it’s been the making of our family.

I benefit hugely, too. By getting all the chores done during the day, Ben and I can cuddle up on the sofa in the evening and talk and laugh — really enjoy each other like we used to in the early days of our relationship.

If that’s old fashioned — well, it works for us.