The Queen’s death is set to trigger a series of changes to the titles of senior royals – including for both the Cambridges and the Sussexes.

The Duke and Duchess of Sussex’s son, Archie Mountbatten-Windsor, is now technically a prince following the death of the Queen – a title which Meghan controversially claimed was previously denied to him because of his race.

His younger sister, Lilibet ‘Lili’ Mountbatten-Windsor, is also entitled to be a princess following the death of the Queen and with her grandfather, the Prince of Wales, becoming King.

The rules set out by King George V in 1917 mean Archie and Lili – as the children of a son of a sovereign – also now have an HRH style if they choose to use it.

Meanwhile, the Cambridges are set to see big changes. As Charles’s eldest son, Prince William has inherited the title the Duke of Cornwall.

William and Kate have already changed their name to include Cornwall, a title they have automatically inherited as a result of Prince Charles becoming king. They are now the Duke and Duchess of Cornwall and Cambridge. 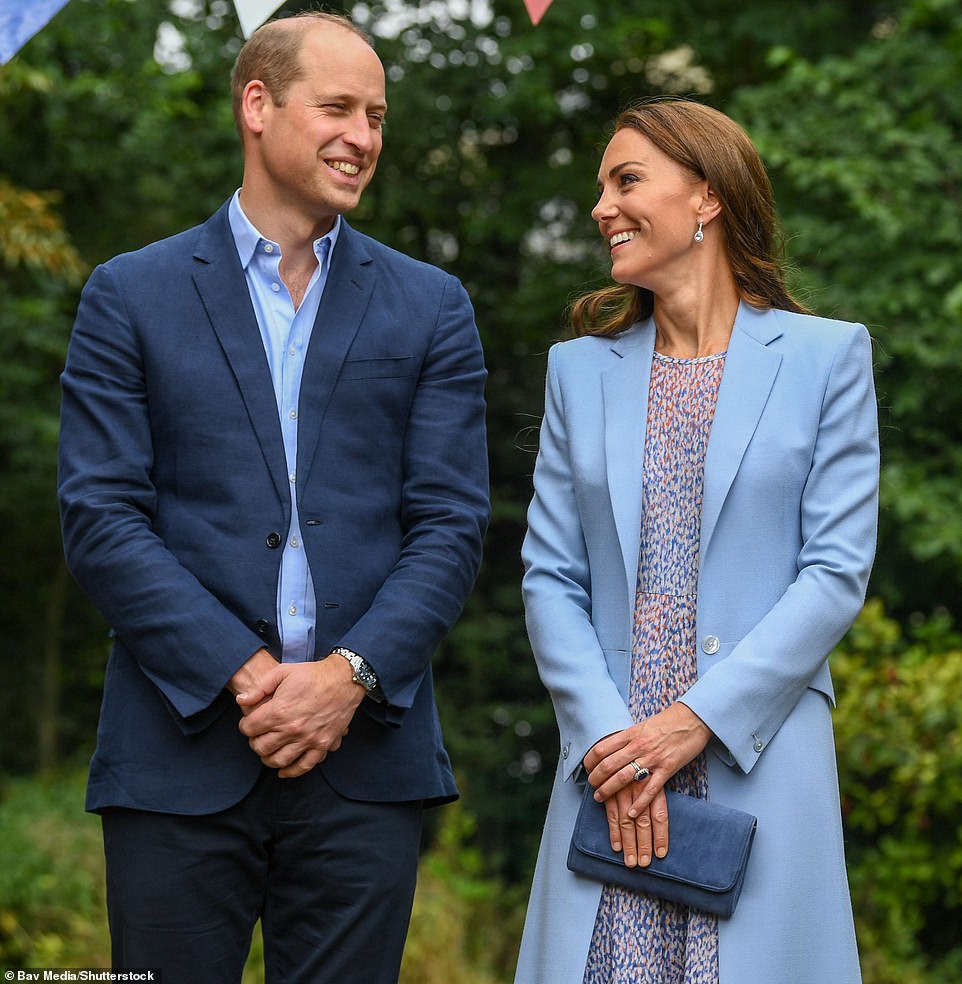 When William becomes the Prince of Wales Kate will become the Princess of Wales (pictured on June 23) – last used by William’s mother, Diana, when she was married to Charles 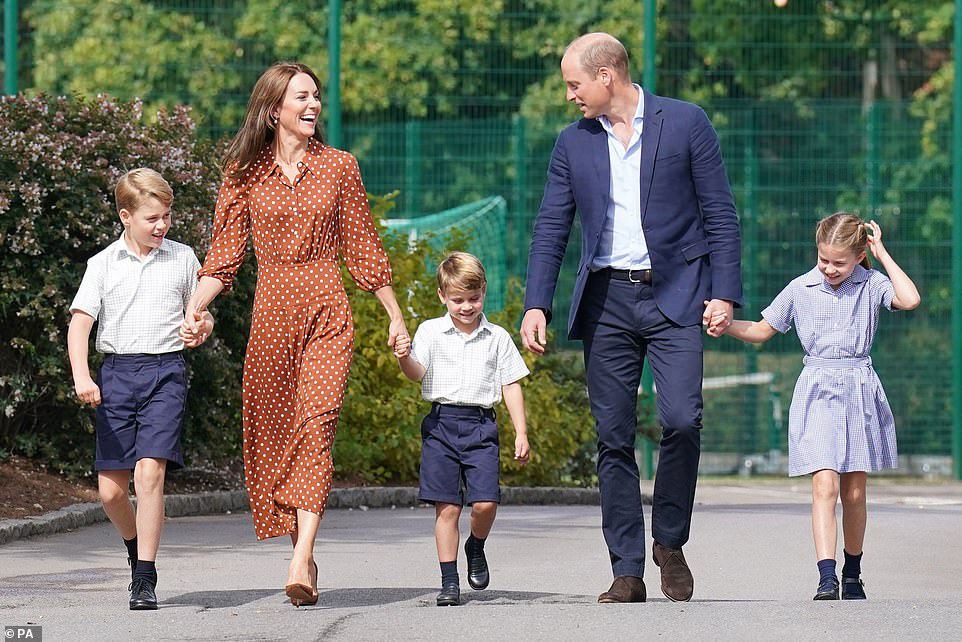 But that could soon change. Prince William could be gifted the title of Prince of Wales from his father. The Queen granted King Charles the title in 1958.

If William is gifted the Prince of Wales title, Kate will become the Princess of Wales. The title was last used by William’s mother, Diana, when she was married to Charles.

Camilla was also technically the Princess of Wales but never used the title because of its association with Diana.

Kate will also hold the title the Countess of Chester, if William becomes the Earl of Chester. She is also now the Duchess of Rothesay in Scotland – previously Camilla’s title.

Similarly, Harry and Meghan’s children will now, for the first time, become Prince and Princess.

During the couple’s explosive Oprah Winfrey interview, Meghan Markle described her ‘pain’ as she claimed officials had denied Archie the title of prince and accused Buckingham Palace of failing to protect him by denying him 24/7 security.

When asked if it was ‘important’ for Meghan that Archie be called a prince, she said she doesn’t have any attachment to the ‘grandeur’ of official titles.

But she said it was about ‘the idea of our son not being safe, and also the idea of the first member of colour in this family not being titled in the same way that other grandchildren would be.’

In 2021, it was suggested Charles – in a bid to limit the number of key royals – intended, when he became monarch, to prevent Archie becoming a prince.

Until that potentially happens or if it does not, Archie and Lili remain a prince and princess, whether their parents choose to use the titles or not.

Meghan argued in the Sussexes’ bombshell interview with US talk show host Oprah Winfrey that Archie was not given the title of prince because of his race. 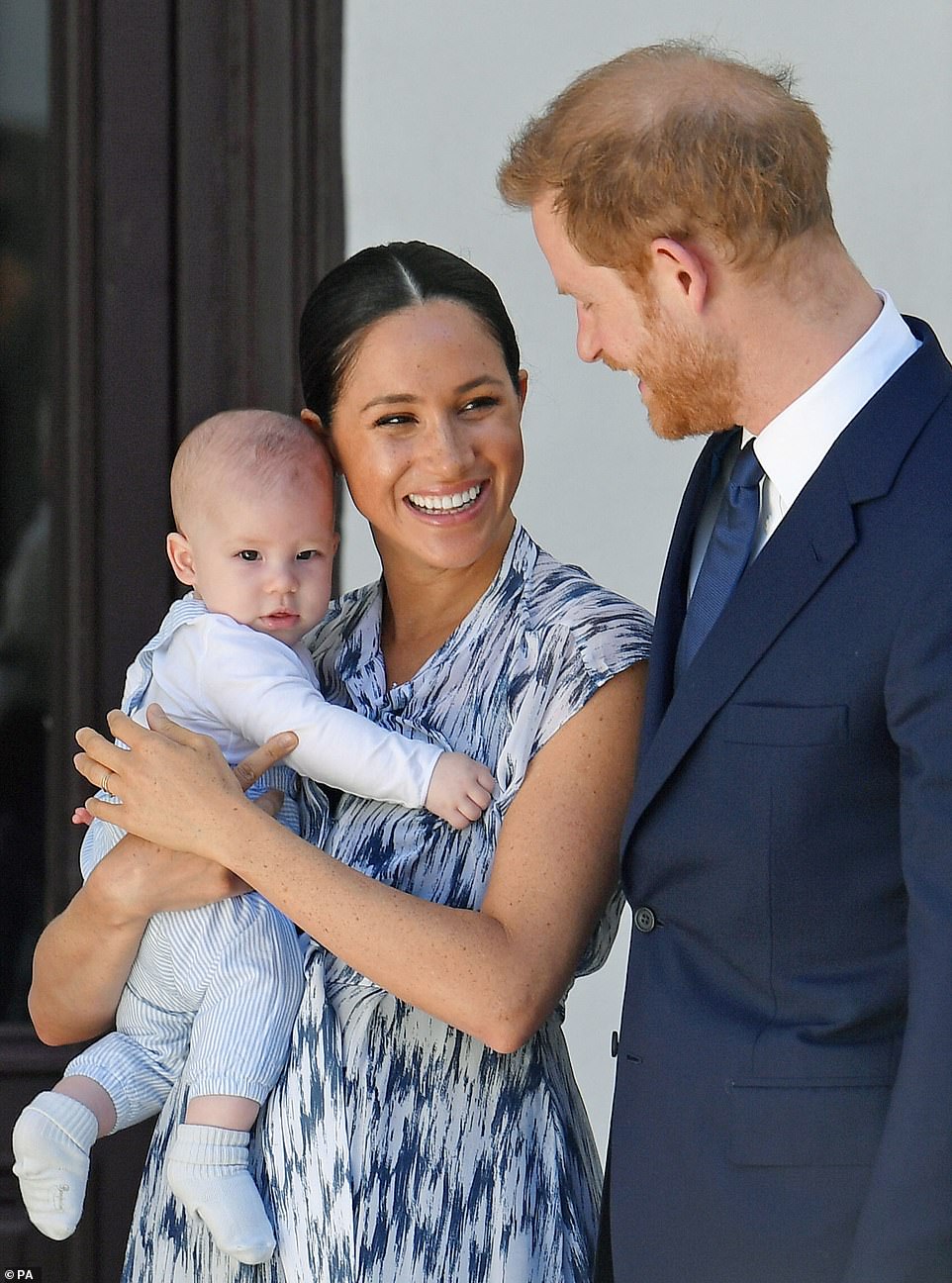 When Archie was born he was too far down the line of succession for such a title according to George V’s restrictions, but now, as the son of a son of a sovereign, he can be an HRH and a prince 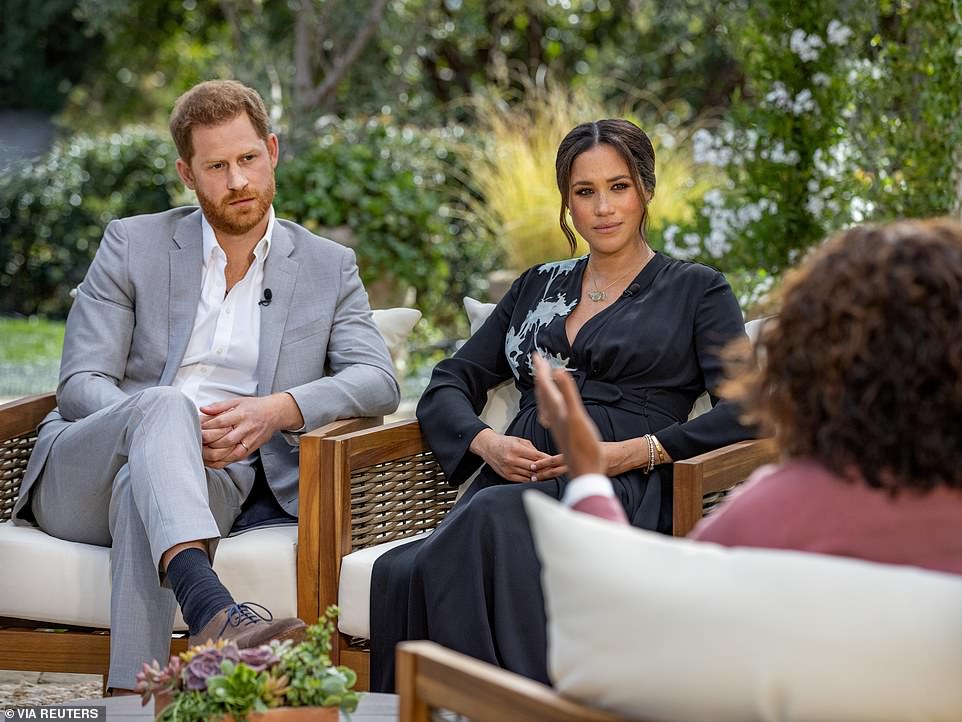 During the explosive Oprah Winfrey interview, Meghan Markle described her ‘pain’ that officials had denied Archie the title of prince and accused Buckingham Palace of failing to protect him by denying him 24/7 security

However, when Archie was born seventh in line to the throne in May 2019, he was too far down the line of succession.

What is the George V convention?

In 1917, the Queen’s grandfather issued new letters patent that limited the number of royal family members with an HRH title.

These stated that ‘the children of any Sovereign of these Realms and the children of the sons of any such Sovereign and the eldest living son of the eldest son of the Prince of Wales shall have and at all times hold and enjoy the style, title or attribute of Royal Highness with their titular dignity of Prince or Princess prefixed to their respective Christian names or with their other titles of honour’. 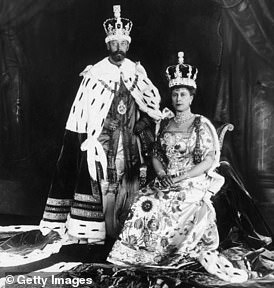 In 1917, the Queen’s grandfather issued new letters patent that limited the number of royal family members with an HRH title

This means that when Prince Charles became King, his grandchildren – including Archie – automatically became princes or princesses.

It was also decreed that  ‘grandchildren of the sons of any such Sovereign in the direct male line … shall have and enjoy in all occasions the style and title enjoyed by the children of Dukes of these Our Realms’ (i.e., Lord or Lady before their Christian name).’

In addition the letters stated ‘save as aforesaid the style title or attribute of Royal Highness, Highness or Serene Highness and the titular dignity of Prince or Princess shall not henceforth be assumed or borne by any descendant of any Sovereign of these Realms.

Although he was a great-grandchild of the monarch, he was not a first-born son of a future king, so was not automatically a prince.

He could have previously used the courtesy title Earl of Dumbarton, or been Lord Archie Mountbatten-Windsor.

But Buckingham Palace said the duke and duchess made a personal decision that he should be plain Master Archie Mountbatten-Windsor instead.

A royal source said following Archie’s arrival that the couple had chosen not to give him a courtesy title ‘at this time’.

Meghan told Oprah that, when she was pregnant with Archie, an unnamed member of the royal family had raised ‘concerns and conversations about how dark his skin might be when he’s born’.

The Sussexes stopped using their own HRH styles after stepping down as senior working royals for a life in Los Angeles, and there were later calls for their duke and duchess titles to be removed.

If Harry and Meghan decide that Archie and Lili will be known as a prince and a princess, this will stand in direct contrast to how Harry has always spoken about the burden of having a title.

He repeatedly stressed the importance of wanting to be seen as normal and confessed in 2017 that he once ‘wanted out’ of the royal family – a wish that became a reality in 2020.

The former soldier said the time he spent in the Army, when he was ‘just Harry’, was ‘the best escape I’ve ever had’ and he had considered giving up his title.

Royal author Penny Junor said: ‘He would have dearly liked to have been a normal boy growing up, and found his title very difficult.’

The duke is close to his cousins, Zara Tindall and Peter Phillips, and may have taken their experiences on board.

Junor added: ‘He looked at Zara and Peter and it was so much easier for them than for him.

‘He was constantly the centre of attention. His friends were targeted whenever he did anything wrong or misbehaved in any way.

‘We knew nothing about Zara or Peter when they were growing up because they were ordinary children going to ordinary schools and were not being treated in any special way.’

Zara, who grew up as Miss Zara Phillips, was not entitled to be an HRH because she was born in the female line as the offspring of the daughter of a sovereign.

She has spoken of how not having a title was a blessing.

‘I’ve been very lucky. My parents didn’t give us titles, so we’ve been able to have a slightly more normal upbringing. As soon as you’ve got a title, it’s very difficult to shed it,’ she said. 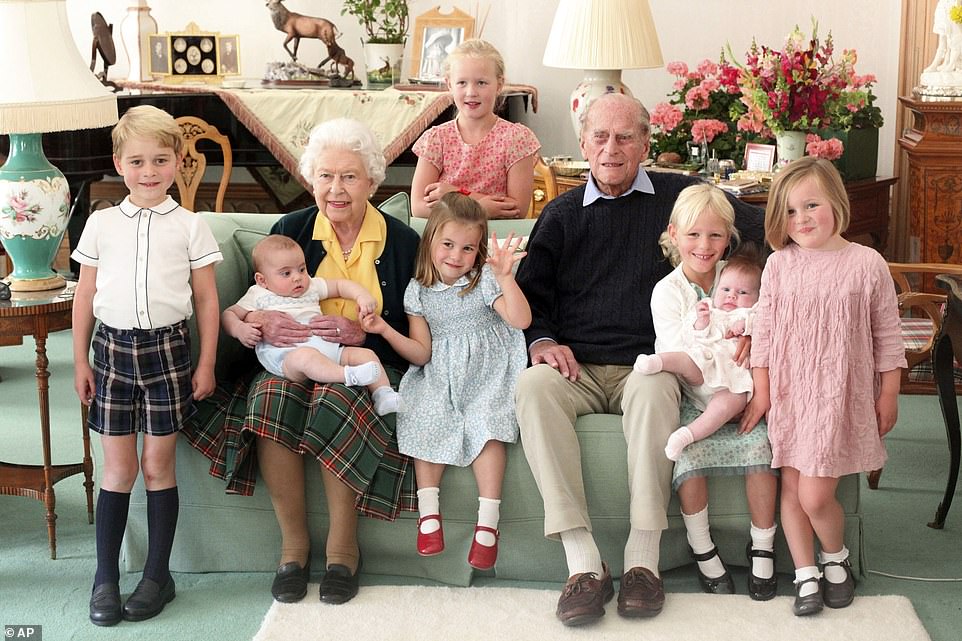 Affectionately called ‘Granny’ and ‘Gan-Gan’, the monarch enjoyed a close bond with the younger generation of royals. Pictured this snap, taken at Balmoral Castle in 2018 by the Duchess of Cambridge, shows the Queen and the late Duke of Edinburgh sitting alongside seven of their great-grandchildren left-right: Prince George, Prince Louis, Princess Charlotte, Savannah Phillips (behind), Isla Phillips holding Lena Tindall and Mia Tindall 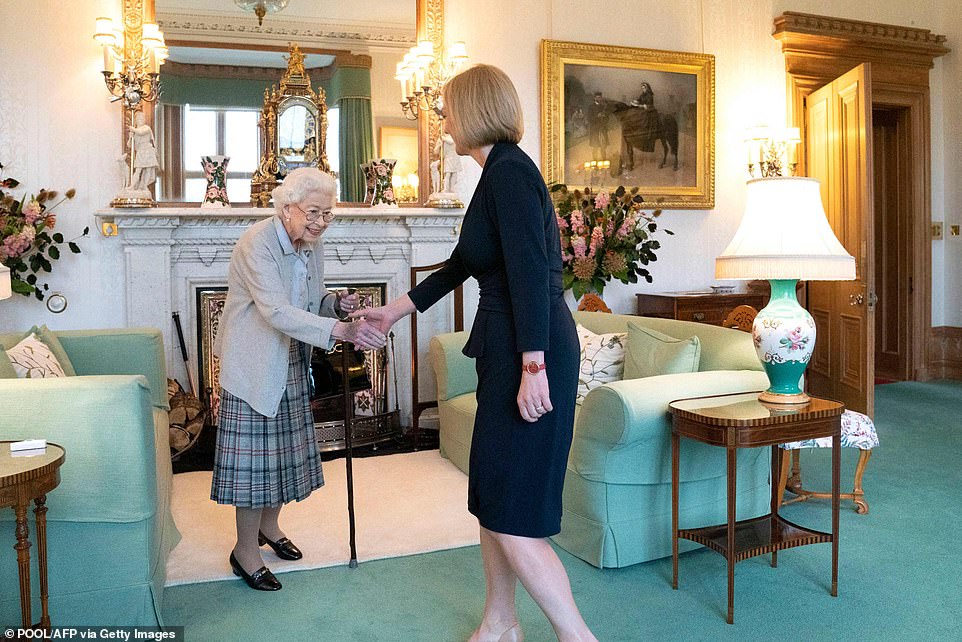 The Queen, pictured earlier this week meeting Liz Truss at Balmoral, died yesterday afternoon at the age of 96

The Earl and Countess of Wessex’s daughter, Lady Louise Windsor, and son, Viscount Severn, as the children of the son of a monarch, were allowed to be known as princess and prince.

But Edward and Sophie, with the Queen’s permission, decided to use the courtesy titles of an earl instead.

Meghan said she and Harry wanted Archie to be a prince so he would have security and be protected.

But being a prince or princess does not automatically mean royals have police bodyguards paid for by the taxpayer, and the Sussexes have chosen to live in the US.

The previous 19th century Duke of Sussex – an eccentric son of King George III – had both his marriages deemed illegal. 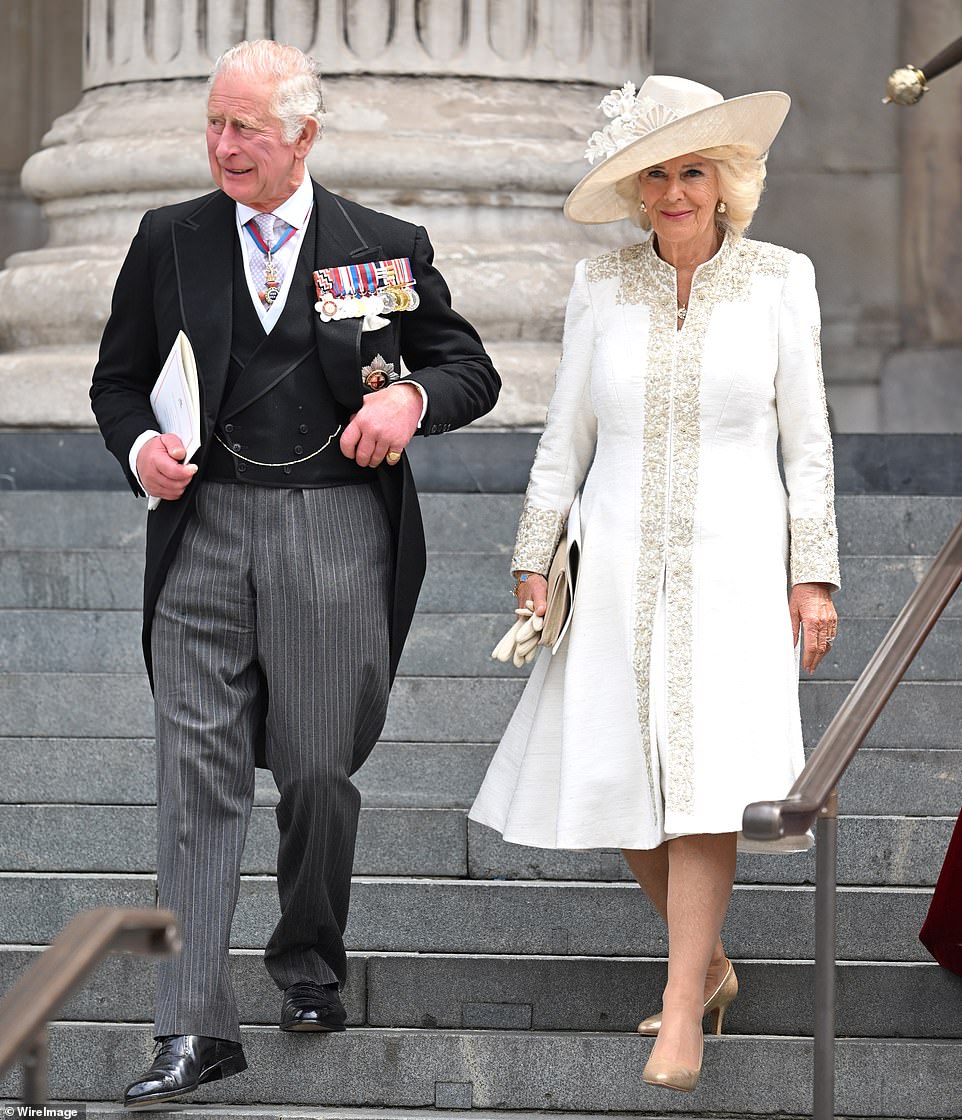 Charles, who was the Prince of Wales, is now King of the United Kingdom of Great Britain and Northern Ireland. Camilla is, as the wife of the King, the Queen (pictured together attending Thanksgiving on June 3) 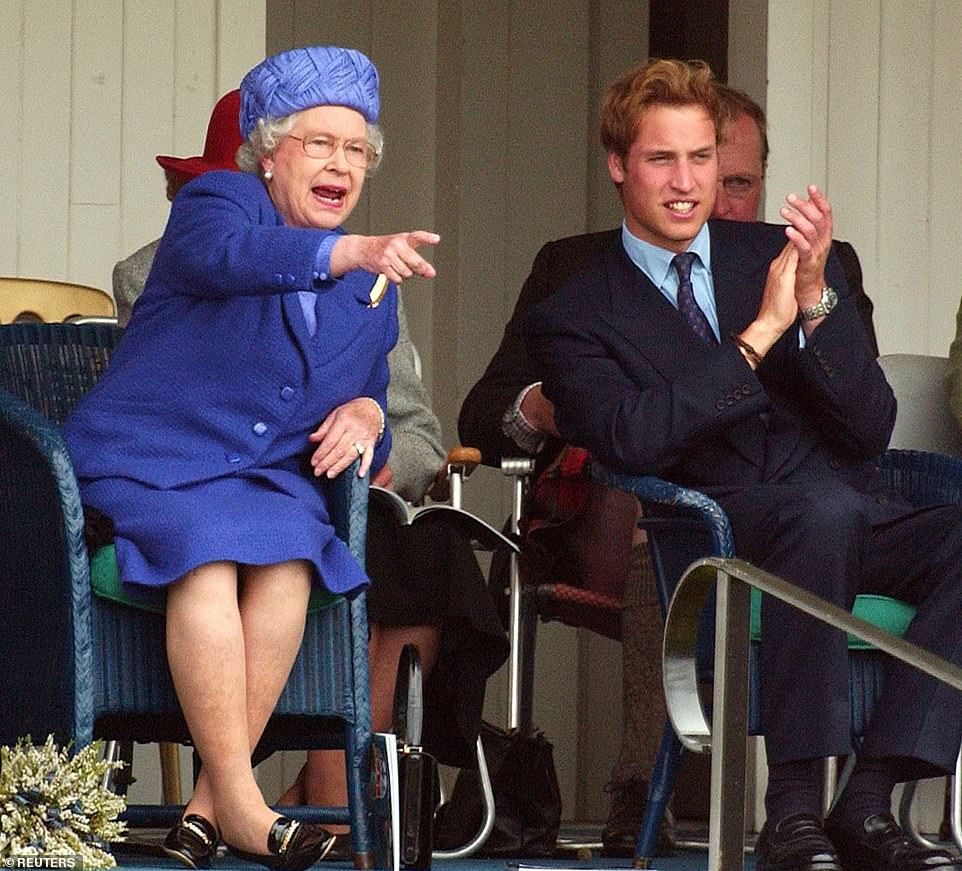 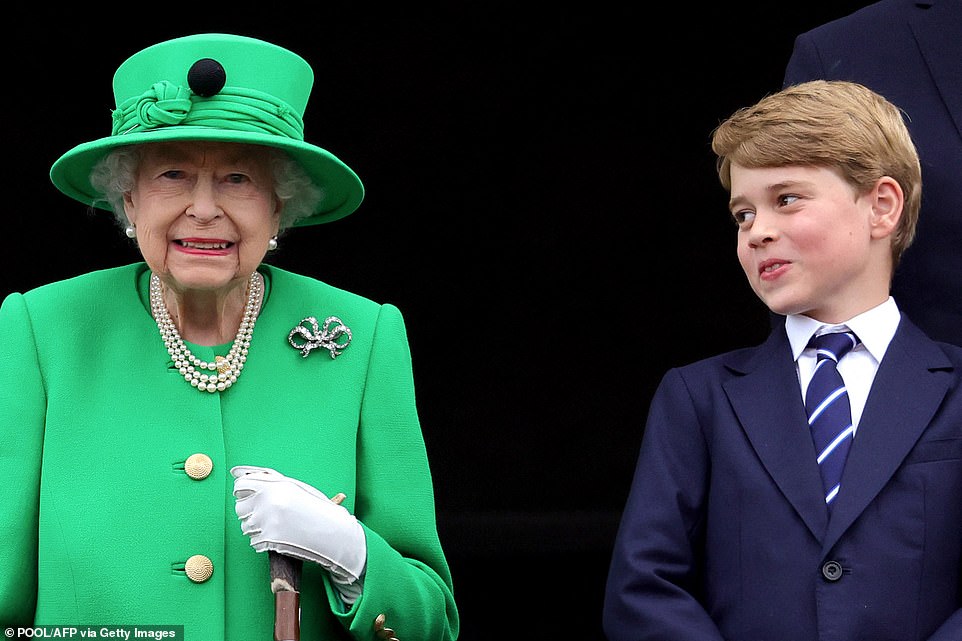 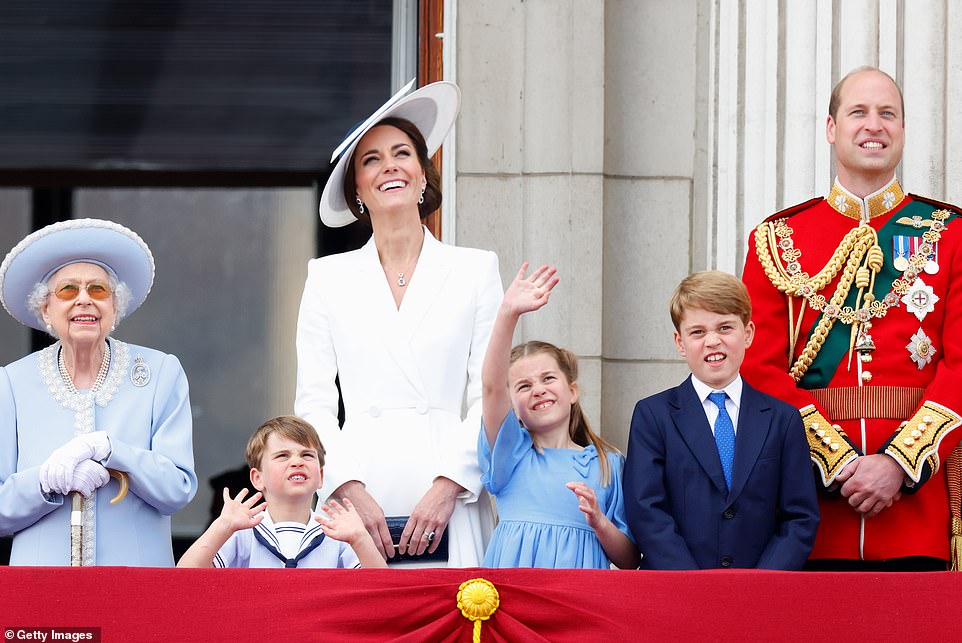 Charlotte joined her parents and the Queen on a number of royal occasions during the Queen’s Platinum Jubilee, including Trooping the Colour (pictured)

His mistress, Lady Augusta Murray, was not the Duchess of Sussex and his illegitimate son was plain Master Augustus Frederick d’Este.

Lady Augusta did, however, continually refer to herself as a duchess and a princess, and staff called her son Prince Augustus and her daughter Princess Augusta. Eventually Archie will be entitled to succeed Harry as the Duke of Sussex.

Meanwhile, Charles, who was the Prince of Wales, is now King of the United Kingdom of Great Britain and Northern Ireland. He is also King of Commonwealth realms.

His style is His Majesty rather than His Royal Highness. Charles is also Defender of the Faith and Supreme Governor of the Church of England. He is now the Duke of Lancaster.

Camilla is, as the wife of the King, the Queen. Her style is Her Majesty rather than Her Royal Highness. She is a Queen Consort, as was the Queen Mother, rather than a Queen Regnant who rules in her own right, such as Elizabeth II.