EXPRESS INFORMER > Business & Finances > How the Queen’s notes and coins can help YOUR pounds soar!

Historic value: Prices are rising for rare notes and coins made during the Queen’s long reign

The glorious reign of Queen Elizabeth II has come to a close, but rare coins and banknotes with images of this much beloved monarch remain a lasting legacy whose values are expected to grow.

The first commemorative coins for King Charles III were struck last week by the Royal Mint. Although these ‘uncirculated’ 50p pieces and £5 crowns make for great mementos, they are unlikely to represent shrewd investments.

For example, the new King Charles commemorative 50p released on October 3 can be ordered for £11 – yet still only has a face value of 50p (as legal tender) and is unlikely ever to be worth buying as an investment.

But collectors may be drawn to the £5 coin as it not only has King Charles on the head, but two images of the late Queen on the reverse. A gold version costs £2,975.

There is even a 1kg gold coin limited to 30 pieces with an image of King Charles on one side and the Queen on the other. It is selling for an eye-watering £82,950.

Maundy Thursday on April 6 next year marks the first issue of King Charles coins with real potential to prove shrewd investments. These coins, traditionally given to the poor by the monarch on the last Thursday before Easter, are struck in silver with nominal values of one penny, two, three and four pence.

A set of Maundy Thursday coins given by Queen Elizabeth from 1953 – the year of her coronation – sold just four days before her death for £1,100. But experts believe they would now command a price nearer to £1,500 as the value of rare currency featuring the Queen rises over the coming months. Only 1,025 Maundy sets were made in 1953.

Gregory Edmund, a senior specialist at coin and banknote trader Spink, says: ‘The Queen’s place in history is only going to grow in importance over time and this is likely to be reflected in the value of rare coins and banknotes relating to her reign going up in price in the months and years ahead.’

He adds: ‘But it is important to know where to look if you want to purchase an investment. Rarity helps make currency valuable. Look out for anomalies where coins were mistakenly released by Royal Mint or produced in extremely limited numbers – as these are where we might now expect to see values rise the most.’

Edmund points to a humble looking 2p piece from 1983 featuring an image of Queen Elizabeth on one side with the words New Pence on the other. Examples now sell for as much as £1,700 – a result of the ‘head’ image being correct and the ‘tail’ words being wrong: ‘New Pence’ instead of ‘Two Pence’.

Another Queen Elizabeth coin with mismatched sides – known as a ‘mule’ in coin-collecting circles – is a batch of 20p pieces from 2008 when Royal Mint forgot to provide the date of issue. These can sell for £70 each. Mistakes can also be made in the metals used in production. The Queen Elizabeth £2 coin is usually made of two alloys – a silver-coloured, copper-nickel disc that is surrounded by a golden hue nickel-brass ring. In 2017, a batch escaped Royal Mint made only of nickel-brass. Pull one from your pocket and you may have a £1,000 find.

Edmund says: ‘You might also consider commemorative coins issued during Queen Elizabeth’s reign. But be wary as these are often little more than mementos sold at a premium price. The ones to look out for are limited editions.’

The coin expert points to the 2009 Kew Gardens 50p that was limited to just 210,000 coins to commemorate the Royal Botanic Gardens’ 250th anniversary. These can sell for £200 if they are still in pristine as-new condition.

King Charles III is expected to be crowned in early June next year – the same month the Queen had her coronation. This is when coins marking his reign will be widely released into circulation. Following the tradition of alternating the profile of successive monarchs, King Charles III is expected to face left. Only Edward VIII broke this tradition preferring to face left after the death of his father George V. This was a result of vanity as he wanted to show his best side where he parted his hair. But Edward VIII never got to be crowned and abdicated less than a year into his reign so he could marry the American divorcee Wallis Simpson.

It meant thousands of King Edward pennies due to be released on his coronation were melted down. Just a handful survived the furnace. In March this year, an example was sold for £200,000. It was divided into 4,000 shares with each ‘ownership member’ paying £50. King Charles will not wear a crown on coin images, following the protocol of recent male monarchs, including George V, Edward VIII and George VI. 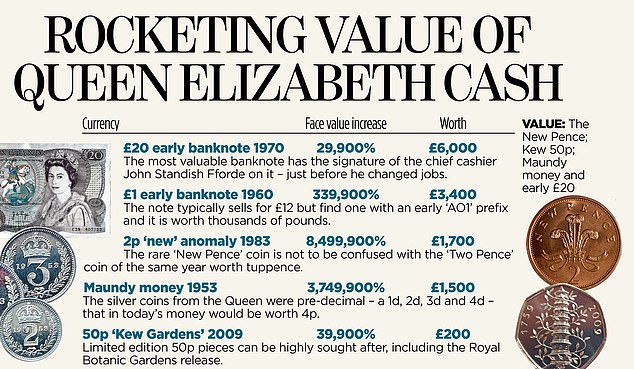 The historic significance of Queen Elizabeth as the longest ever reigning British monarch means circulated coins with her profile are prolific and the vast majority are not expected to ever rise in value over time.

Yet the twists and turns of the Royal Family are hard to predict – so the value of King Charles III coins could jump if there is an unexpected event in the future.

King Charles III banknotes are not expected to be released until 2024 as the new King does not want to waste money pulping newly released, long-lasting polymer ones already in circulation.

While the face of the monarch will change on the new notes, it is not expected that the image on the reverse, such as artist JMW Turner on the £20 banknote, will be altered at the same time.

Pam West, of trader British Notes, says: ‘Queen Elizabeth II was the first monarch to feature widely on banknotes and this increases her appeal for those who are considering an investment.’

West says: ‘The earliest £20 banknotes, depicting William Shakespeare on the reverse, with a signature of chief cashier John Standish Fforde, are extremely rare and worth up to £6,000 if they have a low serial code.’

Fforde was replaced later on in 1970 by John Brangwyn Page. Examples of £20 notes with Page’s signature can command a price of £150. The first £50 note featuring the Queen’s portrait was issued in 1981. Early examples change hands for £340. To date a banknote, you need to be able to decipher the prefix code – though the chief cashier whose signature is on the banknote can also provide a clue.

Unfortunately, it can be a headache for the untrained eye, but websites such as britishnotes.co.uk offer guidance.

There are also British Commonwealth countries with images of Queen Elizabeth on their notes – with Seychelles banknotes particularly notorious among collectors. A 50 rupee note (about £2.50) issued between 1968 and 1973 had the word ‘sex’ secretly written in the palm tree leaves and these can sell for £700 while a late 1960s’ 10 rupee note (50p) spelling out ‘scum’ in the coral reef may go for £300.

Although previous monarchs rarely featured on banknotes, an exception was in 1914 when King George V featured on a ten-shilling (50p) and a £1 note issued by the British Treasury. These were released because the First World War was creating huge demands on the economy and the country’s gold reserves – and Britain desperately needed more money.

Early examples of these banknotes can change hands for £1,800 and £2,500 respectively.