The price Britons now pay for basic supermarket staples and non-alcoholic drinks is up 6 per cent in the last year, a new index from the Office of National Statistics shows.

Its report looked at common, lower-cost groceries across seven supermarket retailers to determine how the UK’s food shop has fluctuated from April 2021 to April 2022.

It comes after criticism from blogger Jack Monroe earlier in the year about food price inflation hitting the poorest hardest after seeing supermarket own-brand prices soar.

The ONS says the price of pasta rose the most, up 50 per cent annually, while potato prices dropped 14 per cent at the same time.

The price of our groceries has risen by an average of 6 per cent in the last year, with pasta seeing the biggest increase, at around 50 per cent more for the lowest-cost item than in 2021

For 13 of the 30 sampled items monitored, the average lowest price increased at a faster rate than the latest official consumer price inflation measure for food and non-alcoholic beverages, which was around 6 per cent over 12 months.

Some of the items where the lowest prices rose at the fastest rate were crisps, which were up 17 per cent, bread and minced beef, up 16 per cent and rice, up 15 per cent.

Comparatively, price decreases were seen for cheese, down 7 per cent , pizza, down 4 per cent, chips and sausages, down 3 per cent, and apples, down 1 per cent. 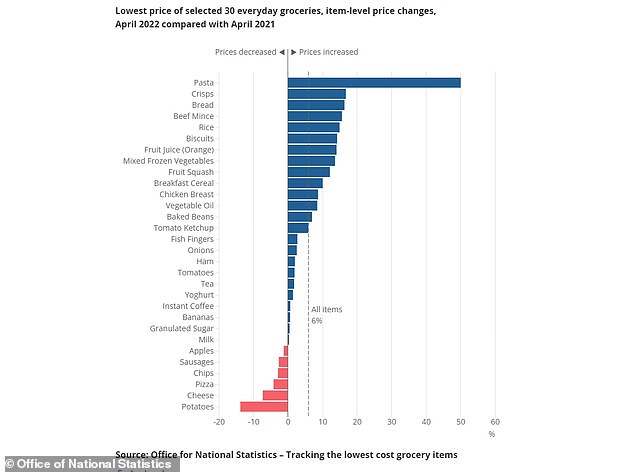 Pasta (an increase of 17p), vegetable oil (14p), and crisps and rice (both increased by 12p) showed the next largest increases in cash terms.

Looking at March to April 2022, the lowest prices of groceries rose by 0.9 per cent.

Over the month, the items that saw the largest increase in the lowest price were breakfast cereal, up 6 per cent, mixed frozen vegetables and vegetable oil, both up by 5 per cent.

The ONS also noted that there is some evidence of shrinkflation, as prices continued to rise, despite packaging sizes getting smaller for select products.

Last week, data from Kantar showed that like-for-like grocery prices were up 7 per cent in the four weeks previous compared to the same time last year.

This was the highest level of grocery inflation it had recorded since May 2009.

Fraser McKevitt, head of retail and consumer insight at Kantar, said: ‘People are really feeling the squeeze at the supermarket tills and they’re having to stretch their budgets further to accommodate rising prices.

‘To put the most recent numbers into context, if you were picking up supplies for a family fry up over the long weekend with toast, eggs, sausages, bacon, and beans it would cost you £6.83 – that’s a significant 40p increase on last year.’

Jack Monroe tweeted this morning: ‘The ONS have released new data today tracking the price rises of the lowest-cost grocery items over the last year, and – backing up my own research and evidence from January – the hikes in the value brands and basics have been much higher than average inflation stats..’

The ONS says its data is ‘highly experimental research’, based on web-scraped supermarket data for 30 everyday grocery items.

It adds that ‘data and analysis… have been produced using new, innovative methods and as a result are less robust than official statistics.’

The ONS said in its report: ‘The items have been chosen using data from the Department for Environment, Food and Rural Affairs 2019/20 family food datasets, which is a module within our living costs and food survey.

‘This data enabled us to identify the grocery items most likely to be bought by households on low incomes.

‘A total of 30 items were chosen as a good trade-off between coverage of a high proportion of expenditure, and the time and complexity costs of adding more items to the analysis.’