When Zillah Byng-Thorne took the reins at Future in April 2014, it was riddled with debt, worth £30million and on the brink of collapse.

But the ‘magazine queen’ – as she has been dubbed – has since transformed the publisher into a £2.2billion empire of 250 titles including everything from Country Life and Marie Claire to TechRadar and FourFourTwo.

Shares have soared around 1000 per cent on her watch, making Future one of the UK’s best-performing listed companies. And yesterday they jumped 5.6 per cent, or 96p, to 1818p following Future’s latest update.

Success: Future boss Zillah Byng-Thorne has seen shares in the publisher soar around 1000% on her watch

The publisher said reader numbers were rising again after a post-lockdown wobble, and advertisers were spending more.

Profit for the year to September 30 will be at the top end of market expectations ranging from £266.4million to £270.7million.

The company doubled down on its update in June when it upgraded its profit forecast, saying the ‘encouraging trading’ has continued.

Speaking to the Daily Mail, Byng-Thorne said: ‘We have built a consistent track record of doubling our business every couple of years, and are excited about our ability to sustain our growth as we aim to reach one in two people online in the US.

Future’s update sets it firmly on the front foot again after it was rocked in the first half of the year by a sharp decline in its shares.

Investors feared a drop off in advertising revenue as businesses pulled back spending.

It was also caught by the global sell-off in tech stocks that has hit companies including Netflix, Facebook and Google-owner Alphabet.

Despite falling 50 per cent this year, shares are still worth a third more than before Covid struck and more than ten times their value when Byng-Thorne took over.

Its meteoric rise has been driven by its strategy of picking up ailing magazine brands cheaply and turning their performance around.

Its technology platform lets it quickly boost the online offering of firms struggling to keep up with the digital transition.

It is also the dominant player in many special interest areas, owning the go-to websites for gamers, photographers, space enthusiasts and more. 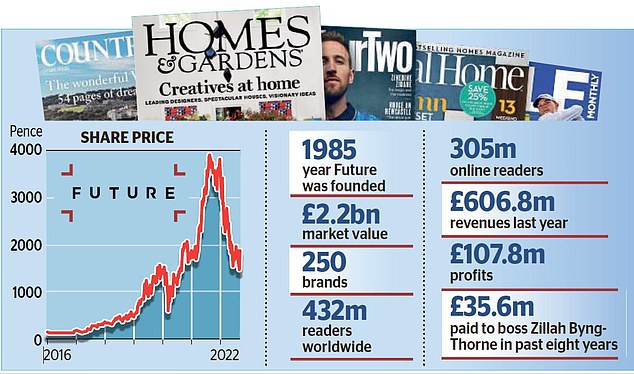 Stock surge: Future’s latest update sets it firmly on the front foot again after it was rocked in the first half of the year by a sharp decline in its shares

This means advertisers can effectively target users who are already interested in an area and minimise waste. That ability has helped to insulate Future from a global cutback in advertising spending.

Future’s three biggest brands are Tech Radar, review website Tom’s Guide and GamesRadar. It has 305m online users around the world, with around half in the UK and half in the US.

It reaches half of all internet users in the UK and a third of those in the US. It is expanding its footprint in America and wants to increase its reach to half of internet users there.

To fulfil this ambition, it bought celebrity style guide website Who What Wear this year, absorbing its 12m online users and 10m social media followers.

But Byng-Thorne also recognises the importance for some brands of holding on to print products, and Future still produces magazines of titles including Country Life, The Week and Homes & Gardens.

Roddy Davidson, from Shore Capital, said Byng-Thorne and her team deserve ‘a lot of credit’ for their turnaround of the business. And she has been rewarded handsomely, taking home £35.6million in the past eight years.

Her pay has attracted criticism, however. At Future’s past two shareholder meetings, it has faced significant rebellions over a bonus package which could net Byng-Thorne, already one of Britain’s best paid chief executives, up to £40million.

In February, 55 per cent of shareholders voted against the scheme, while a year earlier it was opposed by a third.

Hargreaves Lansdown analyst Susannah Streeter said: ‘It’s been a remarkable tenure so far for Zillah who has turned the page for Future into fresh chapters of growth.

‘Rather than offering magazines designed to cater for mass consumption, there has been a razor-sharp focus on creating respected content on specialist subjects, such as gaming, which has been a big draw for advertising partners.’

Davidson said the latest update showed the ‘unjustifiable’ fall in Future’s shares was driven by market jitters, not the performance of the business, adding: ‘The business has transformed from a publisher heavily reliant on print advertising to a multi-platform media business generating the largest proportion of its revenue from digital advertising.’

That will be music to the ears of Future shareholders – and could pave the way to another handsome pay day for the magazine queen.