EXPRESS INFORMER > Business & Finances > How the Brexit doom mongers got it all wrong: UK economy powers back

As Britain settles into the post-Brexit era, it would be wrong to judge the UK’s world-beating financial sector and the strength and creativity of the economy by appearances.

Covid and working from home have left the normally packed alleys of the City of London and crowded plazas among the towers of Canary Wharf looking forlorn.

But the jobs and earnings catastrophe for the City and UK plc, predicted so loudly in the Remain camp, never materialised.

Sign of the times: Anti-Brexit campaigners on a march in London.  But the jobs and earnings catastrophe predicted so loudly in the Remain camp, never materialised

Instead of 100,000 jobs being lost to the Continent, employment in UK financial services is improving.

As a survey by professional services firm EY shows, 87 per cent of global financial firms are planning to extend operations in Britain. That is the highest level of optimism since 2016, the year of the referendum.

This in spite of the fact that unlike other sectors of the economy, such as car making and farming, Boris Johnson’s government failed to put in place any long term ‘equivalence’ measures designed to make sure the vibrancy of the Square Mile and the jobs it creates across the economy are protected.

Compared with the few thousand jobs that have migrated to France, there are many more thousands being created – spanning the new frontiers of financial technology, trading in green bonds and raising fresh capital for the UK’s biotechnology, life sciences and artificial intelligence revolution.

When, in the first hours of Britain’s divorce from the EU, some £5billion of trading in shares denominated in euros moved to Amsterdam, the event was treated as a defining moment for Brexit by the pro-EU opinion formers.

The reality is that much of trading is still conducted on a British technology platform and the infinitely more important £75trillion (yes, trillion) trading of foreign currency and complex products based on currencies and interest rates is as firmly rooted here as it ever was.

It is no accident that in the last year investment bankers Goldman Sachs demonstrated commitment to London as its European and global headquarters, with the opening of a spanking new £1billion home for its 6,500 staff.

The pandemic may have cast a baleful shadow over the national mood but it has also demonstrated the resilience and depth of talent of UK plc.

Our great science-based universities, together with Britain’s life sciences giants Astrazeneca and Glaxosmithkline are making an enormous contribution to saving lives.

The Oxford Covid vaccine garnered the headlines but recent months have also seen big breakthroughs from British-based research and development in the treatment of malaria, meningitis and HIV. 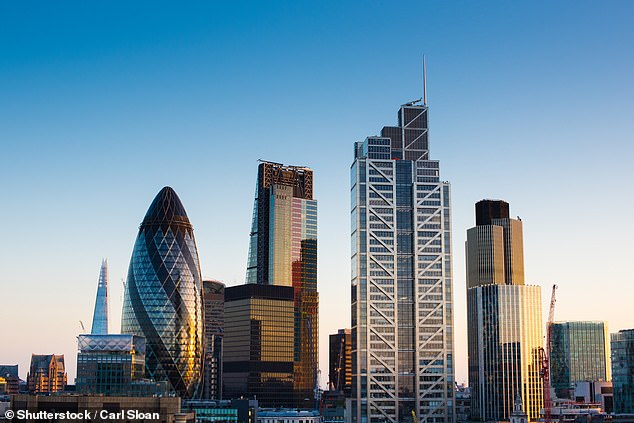 City revival: Instead of 100,000 jobs being lost to the Continent, as some predicted, employment in UK financial services is improving

The creative sector, from film production to gaming and advertising, is booming. The UK has also demonstrated that it can be at the forefront of the digital revolution with the launch on the London markets of companies as different as Cambridge-based cyber security pioneers Darktrace and tech platforms such as Deliveroo and Freddie’s Flowers.

Peppa Pig may be widely mocked as a symbol of the prime minister’s incompetence after his stumbling appearance before the denizens of business at the CBI.

What the critics have failed to recognise is that the British creation, in all its forms, has become one of the country’s great brands, sold for £3billion to US toy giant Hasbro in 2019.

In sport, British-created franchises ranging from F1 motor racing to the Premier League have become the most highly valued sporting enterprises on earth.

There is a tendency to measure Britain’s success by the number of cars built and sold, and the containers arriving and departing from Felixstowe.

As important as manufacturing is, we should never forget that more than 70 per cent of national output consists of services, powered by the country’s native creativity and intellectual property.

Yes, physical trade with the EU has suffered as a result of the pandemic and nitpicking behaviour by European bureaucrats at the borders.

The independent Office for Budget Responsibility has predicted a profound shock to the nation’s balance of payments as a result of the loss of some EU trade.

Nissan has chosen to build its new EV battery plant in the UK and the Mercedes super-range electric car is using technology developed in the West Midlands/Oxfordshire engineering shops of ‘Motorsport Valley’.

To listen to the Remain fanatics you would think the nation is heading for an economic catastrophe of unprecedented proportions.

Sure, the country like the rest of the world, faces a cost of living calamity as a result of supply chain bottlenecks and rocketing energy costs.

Yet the International Monetary Fund, which once predicted that Brexit would be ‘pretty bad to very, very bad’ for Britain and the world, is forecasting that the UK will be among the fastest-growing of the advanced economies in the current year, with a 4.7 per cent expansion.

A recent Deloitte survey of finance directors found 37 per cent said capital expenditure would be a priority in 2022, which is the highest figure since the study was inaugurated in 2009.

Some 59 per cent of respondents reported that demand for products and services was back to or exceeding pre-pandemic levels.

The optimism of large slices of the business community, the resilience of the City and the creativity and innovation of British commerce are not subjects we hear much about amid the endless gloom from the broadcasters and opposition politicians.

It is time that the critics lifted their eyes and recognised that Britain’s flexible economy is powering back.