AFL’s umpire hypocrisy exposed: League officials demand that the players respect umpires but here’s how the game has short-changed them over and over again

The AFL is blaming player abuse for a shocking decline in umpire numbers, but at the same time the league is short-changing its own officials so badly they could potentially walk away from the game.

While controversy swirls over the AFL’s crackdown on dissent – that includes simple acts like a player raising their arms, pointing to a screen or gesturing at the grass – it has been revealed savage cuts made by the AFL during Covid are still taking a toll on match officials.

Aussie Rules has a problem, with a shortage of around 6000 match officials at all levels

Caroline Wilson of The Age revealed that the AFL’s field umpires no longer regularly train together, do not have access to a gym despite being required to be fit enough to run up to 15km a match, and until round three of this season were banned from using Marvel Stadium – despite the venue being named their coaching base in 2021.

It comes after umpires were forced to take a 50 per cent pay cut during the height of Covid lockdowns and restrictions in 2020, and also had to agree to be willing to work until as late as December.

Aussie Rules footy is short 6000 umpires across all levels and the latest crackdown on dissent is the supposed magic bullet the AFL is firing to address that problem. 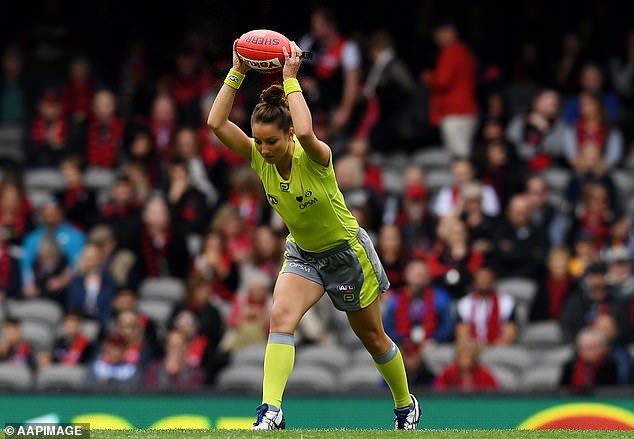 Umpire Eleni Glouftsis is the only female field umpire in the AFL. She’s pictured at the centre bounce, which umpires have made repeated calls to ban from the game

The situation is so dire that outgoing AFL boss Gillon McLachlan apologised to the officials in March for letting the situation reach crisis point.

‘Frankly, I take responsibility for the fact it’s got away from us,’ McLachlan said.

‘I think the rules are clear. We are not going to tolerate the abuse of umpires. It’s clear to our players, our clubs, I’m apologetic it’s got to this point.

‘We’ve got a dearth of umpires, we’re 6000 umpires short nationally. It’s great credit to the growth of the game but it’s also the fact the supply of numbers hasn’t kept up.

‘It’s a tough job but it’s also made tougher by the players and supporters and others with the abuse, and we’re not going to put up with it anymore.’

However, abuse is only cited as the reason for leaving the game by six per cent of officials who have walked away from the sport.

Over half of all those that drop during the umpire development pathway leave because of work/study commitments, health or injury, not enough support, poor pay or just because they are not enjoying it. 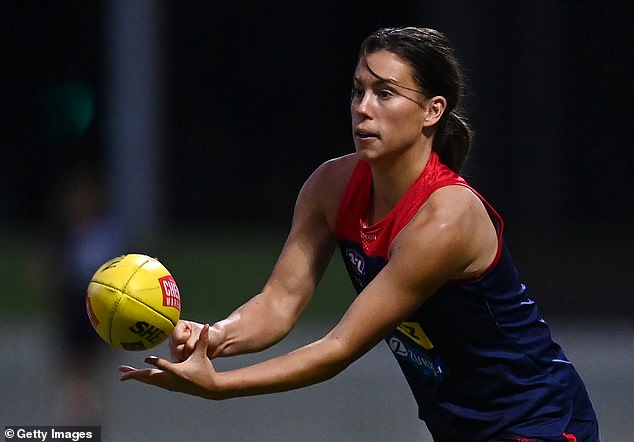 AFLW star Libby Birch wrote that while pay conditions were favourable at men’s AFL level, it took a sharp dive at all other levels which is another barrier in front of aspiring umpires – especially women. Her brother is part of the VFL development pathway and she revealed the financial disparity at that level.

‘While working or studying full-time, a VFL umpire earns on average $88 a week for a maximum allocation of four hours of training (despite commitments of almost triple that).

‘Umpires at VFL level are constantly being assessed and marked; one mistake can get you ‘demoted’ for a week. They are expected to be at the ground 60 minutes before the game, just as a player at this level would be and, I believe, are under the same amount of pressure, if not more, as players are to perform.

‘Yes, in recent years we have made significant progress in lifting AFL, AFLW and our pathway competitions to elite standards, but we are yet to match this level of support for the game’s officiators.’