Major banks, telecoms giants, energy suppliers and travel firms are burying their telephone numbers on obscure pages of their websites to deter customers from calling for help.

Many companies are instead urging people to use ‘live chat’ services or demanding complaints are made via social media sites such as Twitter.

A Money Mail audit this week found that in one of the worst examples, customers have to click through six pages on telecoms giant BT’s website to find its phone number.

Fines: Our Pick Up or Pay Up campaign is calling for a new law to force big businesses to pick up their phones within ten minutes

The Telecoms giant says this can be reduced to three clicks — but only if you know exactly the right boxes to tick in the endless options and drop-down menus.

It also took a reporter nearly two minutes to locate contact information for Barclays and Sky. And we could not find a number at all for Amazon.

Many — including British Airways, Santander and Scottish Power — have messages online advising customers not to bother ringing at all due to high wait times.

Some firms even make customers fill out an online form or answer a series of questions before revealing their helpline number.

Our experiment used a desktop computer but experiences may vary between devices.

Money Mail is calling for a new law to force big businesses to pick up their phones within ten minutes — or face big fines.

Our Pick Up Or Pay Up campaign aims to bring an end to customers being left on hold for hours. It is supported by 34 MPs and is set to be discussed in Parliament after Conservative member Robert Halfon applied for a backbench debate on the issue.

But first, customers must be told the numbers they need to call. We audited a range of businesses which are repeatedly named and shamed by readers.

Many people said they struggle to even get to the point of being on hold because firms are deliberately making it difficult to find their phone numbers.

British Airways buries its telephone information at the very bottom of its ‘help’ page under a drop-down section headed ‘All other enquiries’.

Ironically, companies use an icon of a telephone next to their ‘contact us’ section on websites — despite not giving a number. Instead, websites direct people to their ‘live chat’ services, or ‘Frequently Asked Questions’ page.

For example, Sky’s website reads: ‘Over 90 per cent of our customers who use our online guides get the help they need before even having to get in touch.’

The Scottish Power website states: ‘Call waiting times may be longer than usual.’ While Virgin Media says: ‘Please only get in touch if you need to.’ And Barclays advises: ‘Talk to us directly through social channels too’. 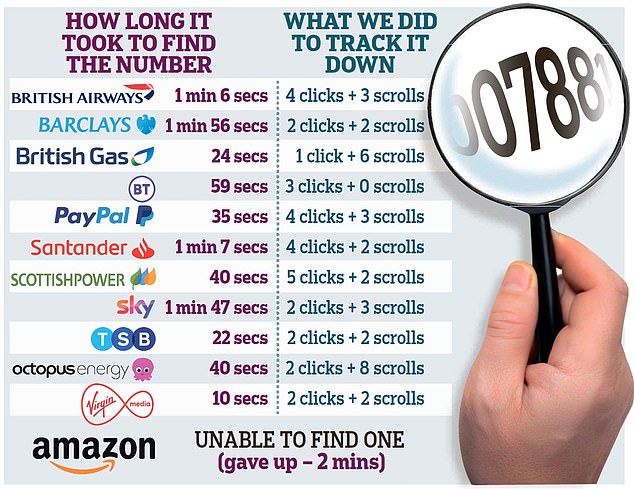 We found that the quickest way to get a number was often by searching the ‘complaints’ section of a website.

It’s clear from Money Mail’s postbag that this online-heavy approach does not meet everyone’s needs. As one reader points out: ‘Most companies assume everyone has the internet and a smartphone, and people feel they are being forced online. This unfairly penalises the elderly, who get treated abysmally in this country now.’

Campaigners and politicians have joined our calls for firms to improve customer service.

Consumer expert Martyn James says: ‘Now more than ever customers need one-to-one help. But trying to find a number for a business is like an endurance test. Companies are making it as difficult as possible to find their numbers so that people just give up and don’t phone them.

‘That is especially unforgivable for the telecoms companies.’ 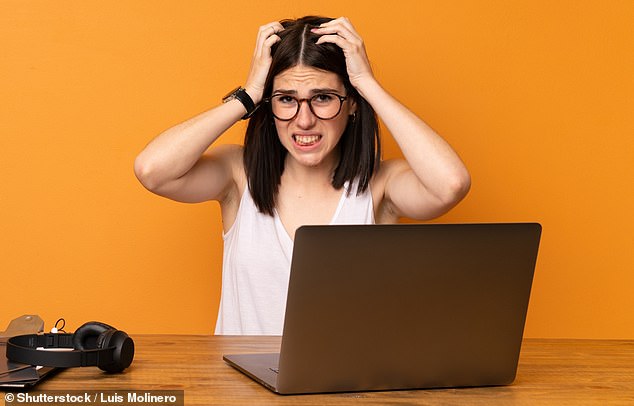 Blocked: Customers have to click through six different pages on telecoms giant BT’s website to find its phone number.

Consumer champion Jane Hawkes adds: ‘Customers not only face lengthy waits on hold, but in many instances can’t even find company contact details. This is unacceptable.’

Our campaign manifesto is simple: we want the Government to update the Consumer Rights Act 2015 with a statutory instrument — secondary legislation which can make changes to an existing Act of Parliament.

This would give regulators such as Ofgem and Ofcom the power to fine firms who do not answer the phone within ten minutes.

Recently, a similar law was passed in Spain.

Over the summer Money Mail hosted a drop-in event for MPs in Parliament, armed with thousands of letters and coupons of support sent in by readers.

We are also calling for firms to be forced to offer a working phone line service for customers, a callback service if they cannot answer and publish their daily wait times.

A BT spokesman says the company makes it ‘very easy’ for customers to contact them. Sky says its contact number is ‘clearly listed’ on its website.

Octopus Energy claims most customers find its number through a Google search and that it comes up straight away, while PayPal says it is ‘easier and quicker’ if customers log into their account online before ringing.

Virgin Media, Santander, British Airways and Barclays all say that for convenience’s sake, they offer a variety of ways for customers to contact them.

British Gas is investing in 500 more call-centre staff to meet increasing demand. Scottish Power says it ‘actively encourages’ customers to self-serve only so they can get help as quickly as possible.

Amazon operates a chatbox and callback service which customers can access if they enter their number online.