Worst offender Barclays pays customers with its easy-access account just 0.01 per cent — a miserly 10p for every £10,000 saved.

This is the same pitiful rate offered when Bank of England base rate was 0.1 per cent, despite five consecutive rises in six months.

Pitiful rates: Savers can earn 1.5% on easy-access accounts if they shop around online, but on the High Street, worst-offender Barclays is still paying a miserly 0.01%

Elsewhere, savers can earn 1.5 per cent, some 14,900 per cent more than with this dud Barclays account.

Yet the banking giant is content to raise its borrowing costs. From August 1, its default or standard variable rate (SVR) will rise to 5.74 per cent — one of the highest of all banks.

James Blower, The Savings Guru, says: ‘It’s disgraceful. Barclays moved at lightning speed to lift mortgage rates, and has the worst SVR, yet has passed nothing on to savers.

Unfortunately, it knows most of its savers will do nothing and it is using this situation purely to boost profits.’

Our table, right, shines a light on the worst accounts. Most big banks have kept easy-access rates below 0.25 per cent.

This is despite the base rate, which has already been increased to 1.25 per cent, expected to continue rising to fight runaway inflation. 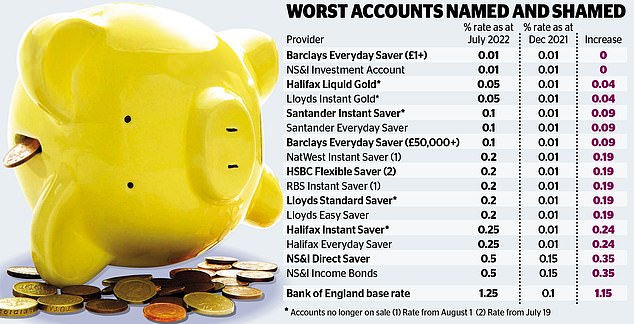 Fixed-rates have not fared much better. While savers can now bag a leading 2.72 per cent over 12 months and 3.08 per cent for two years, no High Street bank comes close to that.

NatWest/RBS do not offer ordinary accounts with fixed rates.

HSBC pays just 0.45 per cent and 0.5 per cent over one year and two years respectively, with a measly 0.1 percentage point increase coming next week.

Even where rates are raised, savers are urged to check as banks and building societies are increasingly putting the onus on customers to apply for the new deal rather than paying it automatically.

Many do this by launching new issues of the same account that pay a higher rate of interest.

It means loyal savers will not earn the higher rate unless they open the new version and transfer their money into it.

Experts say providers hope people won’t notice they are in an older version where the rate can be more than 1 percentage point less generous.

One banking giant even hinted that customers are not bothered about earning a low rate as it doesn’t make a ‘material difference in their savings’.

Anna Bowes, from website Savings Champion, says: ‘Don’t assume the rate now in the shop window is what you are earning. It is vital to check your rate so you don’t miss out.’

Money Mail reader Craig Jackson, from Crawley in Sussex, found he was being short-changed with his Sainsbury’s Bank cash Isa after it hiked the rate last month for new savers.

He says: ‘My online account showed that I was still earning 0.35 per cent even though Sainsbury’s current rate is 1.22 per cent. The bank said I was expected to ring to ‘claim’ the new rate.’

On this account the rate is as low as 0.15 per cent if you opened it between January 21 and July 19 last year — 1.07 points below its advertised return. If you took out the account before this date, your rate is 0.35 per cent.

Readers Lavinia Underhill, from Herefordshire, and Anne, from Somerset, have reported the same sneaky tactic and both claim it is impossible to contact the supermarket bank via telephone to boost their deal.

But savers in older versions are earning a lowly 0.25 per cent — a huge 1.15 percentage points less. 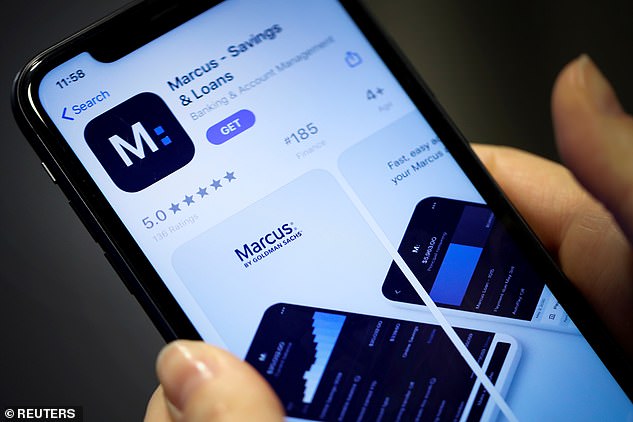 Online deal: Marcus by Goldman Sachs recently raised its bonus from 0.1% to 0.25% to bring its easy access rate up to 1.3%

Even those who opened issue 14 only earn 1 per cent, well below the new 1.4 per cent. The rate is fixed for 12 months as long as you restrict your withdrawals to three a year.

After the term ends, the building society moves you into an instant access savings account which pays a much lower rate.

Santander earlier this month increased the rate on its eSaver account to 0.75 per cent with the launch of issue 20.

Savers earn this rate for a year, after which they are transferred into its Everyday Saver currently paying just 0.1 per cent.

HSBC is boosting the rate on its Online Bonus Saver to 1.3 per cent from 0.45 per cent next week.

However, this is only on balances up to £10,000 and savers have to move their money from its flexible saver account to get the new rate.

Currently, this pays just 0.1 per cent and will pay just 0.2 per cent from next week, some 1.1 per cent lower than the bank’s Online Bonus Saver.

Marcus by Goldman Sachs recently raised its bonus from 0.1 per cent to 0.25 per cent to bring its easy access rate up to 1.3 per cent.

Savers already in the account did not have to open a new one. But they still had to claim the new bonus.

Money Mail is today calling on savers to move the billions held in low-paying instant access accounts and grab a fairer deal.

We are also urging the Financial Conduct Authority to bring back its proposal for a basic minimum savings rates to protect loyal customers.

Saffron BS raised its eSaver issue 20 from 0.65 per cent to 1.05 per cent. At the same time, it raised the rates on previous issues to match.

Ford Money, Kent Reliance, Aldermore and Shawbrook Bank are among those who follow this practice.

Leapfrog the best rates by using a savings platform

A new wave of savings platforms have emerged in recent years which help savers manage their accounts more easily and move money into better rates after signing up.

Some have sign-up bonuses that can help boost rates to make them better than what is on offer elsewhere and also offer Financial Services Compensation Scheme protection.

The savings platform, Raisin* is currently offering a £25 welcome bonus to This is Money readers, but they must open a new Raisin Account via this link* or any link originating from our website.

It offers savers the chance to boost their savings by £25 when they open and fund an account on its marketplace with a minimum of £10,000.

It is also offering a £25 refer a friend bonus, which means you’ll also receive £25 for every friend you refer who funds a savings account with £5,000 or more.

If you successfully refer to friends who go on to fund their Raisin account with £5,000, that could mean securing yourself £50.

Each of your friends will also receive £25 when they fund a savings account with a minimum duration of 6 months with £5,000 or more.

You can find out the best rates available on Raisin via our savings platform table* and see how you can boost your deposit with the bonus to potentially leapfrog the best rates on the market.