Between 9,000 and 16,000 Britons are getting infected with coronavirus every day, according to researchers monitoring the UK’s outbreak.

King’s College London (KCL) scientists behind the COVID Symptom Tracker mobile app estimate that there were at least 16,310 daily cases of the disease in the last week, more than double the 7,536 estimated last week.

The Office for National Statistics, a Government-run agency, has made a more modest estimate today, saying it thinks around 9,600 people are contracting the virus every day, a 60 per cent rise from the 6,000 a week prior.

Both surveillance projects are picking up far more than the Government’s official testing programme, which recorded 6,000-plus cases on Thursday and Wednesday.

KCL collects its data by sending tests to people who report tell-tale symptoms of Covid-19 into the mobile app, while the ONS study sends tests to random households regardless of their health status.

Data from the symptom-tracking app, which has seen millions of Brits sign up and report their symptoms, suggests there are nearly 150,000 people currently suffering symptomatic Covid-19, although many more will have no symptoms.

This figure has more than doubled since last week, when there were about 70,000 symptomatic patients. The chief scientist behind the app said it was fresh evidence the crisis was ‘rising at an alarming rate’.

The ONS, on the other hand, estimates that about 113,000 people are currently carrying the virus – equating to around one in 500 people – although the number-crunching body only looks at England and Wales.

The Office for National Statistics, a Government-run agency, has made a more modest estimate today, saying it thinks around 9,600 people are contracting the virus every day, a 60 per cent rise from the 6,000 a week prior 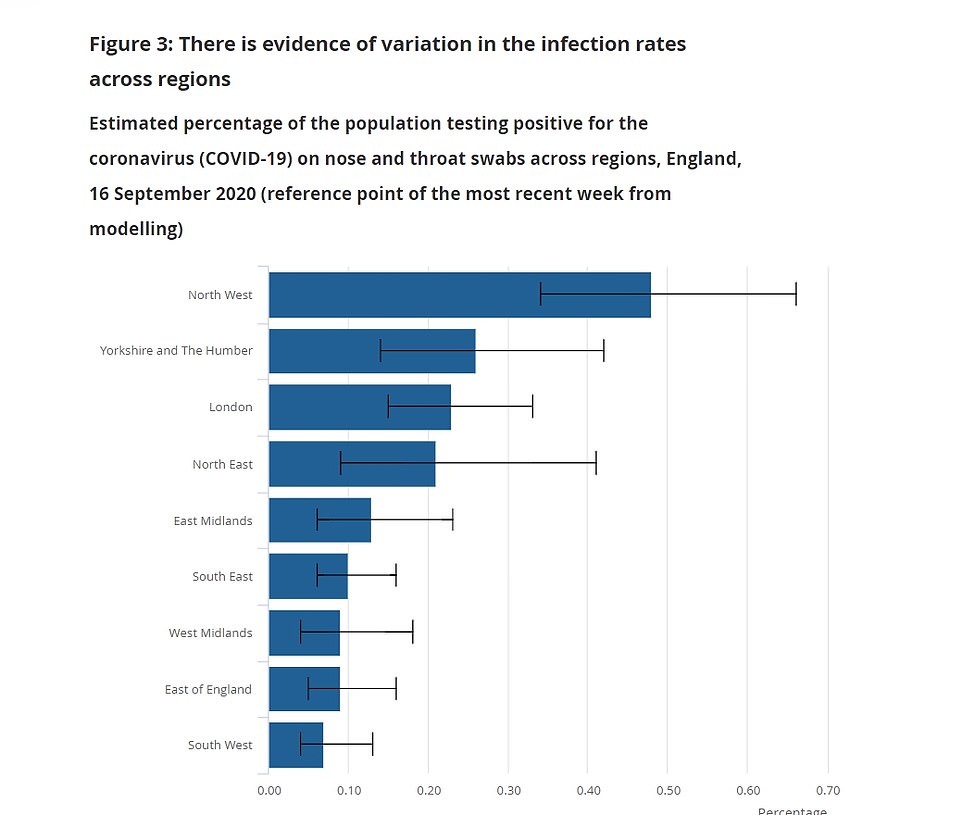 The North West is still bearing most of the brunt of the second wave, but Yorkshire, London and the North East are seeing significant outbreaks Both the ONS and KCL surveillance studies are picking up far more than the Government’s official testing programme, which recorded 6,000-plus cases on Thursday and Wednesday Data from the King College London’s app, which has seen millions of Brits sign up and report their symptoms, suggests there are nearly 150,000 people currently suffering symptomatic Covid-19, although many more will have no symptoms

KCL has based its latest estimates on nearly 7,000 tests this week, of which 151 were positive – about three times more than the ONS.

More positive tests improves the accuracy of the data but the study may have a slight bias because it only swabs people who are already ill.

The ONS study sends tests to random groups of people, which may give a better indication of the true scale of the virus. But the real number of infections is likely to lie somewhere in the middle, and both datasets are being fed into Government  to help steer it through the crisis. Broken down, the North of England is being battered hardest by the latest surge in infections, but London, Glasgow and Belfast are also seeing ‘worrying’ rises, according to the KCL team

KCL’s fresh batch of data was based on 6,847 swab tests done between September 7 and September 20 from people right across the UK, during which 151 people tested positive for the virus.

Researchers then extrapolate this data to the general population to make estimates about the virus’s trajectory.

Almost half of the new daily infections are occurring in the North of England (7,778) but London, Glasgow and Belfast are also seeing ‘worrying’ rises, according to the KCL team.

Broken down, the North West of England is being battered hardest by the latest surge in infections, with estimated cases tripling in the last seven days from 12,544 to 36,316.

The researchers now predict the reproduction ‘R’ rate – the average number of people each Covid-19 patient infects – is dangerously high across the UK – 1.4 in England and Wales and 1.3 in Scotland.

Experts say keeping the R squaashed below 1.0 is essential to prevent the outbreak from growing exponentially and spiralling out of control.

Tim Spector, professor of genetic epidemiology at King’s College London and the brains behind the app, said: ‘The number of cases in the UK continues to rise at an alarming rate as we are seeing figures doubling weekly across the country, in particular we are worried about places like London and other major cities like Manchester, Belfast and Glasgow where cases are surging and the R value is around 1.4.’

The ONS estimated that the number of cases of coronavirus across England jumped 60 per cent in a week, new data shows. The ONS said: ‘The estimate shows the number of infections has increased in recent weeks. In recent weeks, there has been clear evidence of an increase in the number of people testing positive for Covid-19 in all age groups, with the current rates highest in the 17 to 24 age group. There is evidence of higher infection rates in the North West, Yorkshire and the Humber, London and North East.’

An estimated 0.35 per cent of people in Northern Ireland had Covid-19, which is around one in 300 people. The ONS did not put an exact figure on how many infections.

Katherine Kent, co-head of analysis for the Covid-19 Infection Survey, said there had been a ‘marked’ increase in cases across England.

She added: ‘Every week we are sending out new letters to houses across the UK to ask them to take part in the Covid-19 Infection Survey to help us get more information about how the virus is spreading. If you receive a letter from us, please take the time to register and help control the spread of this virus.’

Yesterday, Britain recorded 6,634 more cases of coronavirus in the highest daily toll on record.  It took the official infection toll to 416,363, although millions of Brits went undiagnosed during the first wave of the pandemic due the government’s lacklustre testing regime. Top experts say more than 100,000 people were actually catching the virus every day during the darkest days of the first wave.

The 6,634 new infections in the last 24 hours mark a twofold rise compared to last Thursday, when 3,395 people were diagnosed with the disease. Yesterday saw another 6,178 infections recorded. Data shows the rolling seven-day average of daily cases has jumped 48 per cent in a week.

Infections were squashed well below 1,000 from late June until early August following the lockdown in spring, but Covid-19 cases have been on the rise ever since.