With the football World Cup just over a week away, Qatar is in the spotlight like never before.

The tournament, which kicks off next weekend, is shaping up to be one of the most controversial, with concerns about the Gulf state’s human rights record and stance on LGBT+ rights.

The hosts have also faced accusations that thousands of migrant workers died building stadiums to host the event, which is costing an estimated £190billion, around the same as the annual GDP of Portugal and nearly four times Qatar’s annual state budget of £49billion.

Towering above the rest: The Qatar Investment Authority has stakes in, several notable London properties including The Shard skyscraper (pictured)

But the World Cup is merely the latest in the gas-rich nation’s long-running programme to use its wealth to attract tourism and boost its coffers.

Another part of this strategy is the construction of a vast business empire around the world, including in the UK where its interests span airports, utilities, property, retail and stocks.

The country was also caught up in a scandal earlier this year when it was reported the King, when he was Prince of Wales, accepted bags containing around £2.6million in cash during meetings with Sheikh Hamad bin Jassim bin Jaber Al Thani, the former prime minister of Qatar.

The money was handed to the then-heir to the throne in a suitcase, a holdall and in carrier bags from luxury department store Fortnum & Mason. There is no suggestion the payments – for his charitable foundation – were illegal.

Most of its investments in the UK are through the Qatar Investment Authority (QIA), the country’s sovereign wealth fund which is estimated to hold assets worth nearly £400billion.

The opaque organisation owns, or has stakes in, several notable London properties including The Shard skyscraper, department store Harrods and the Canary Wharf financial hub.

The QIA is also a major shareholder in Heathrow airport, with a 20 per cent stake purchased in 2012.

British property has become a particularly attractive investment for Qataris, with the family of the country’s ruler, Sheikh Tamim bin Hamad Al Thani, owning more than 4,000 land titles across the UK, ranging from hotels and luxury mansions to industrial estates. 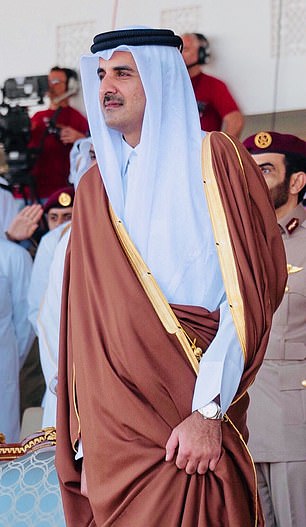 Hotels in the property empire include five-star locations such as The Ritz and The Savoy, as well as Claridge’s in the heart of Mayfair, a part of the Qatari-owned Maybourne Hotel Group and a favourite of royals.

The QIA is also the largest shareholder in banking giant Barclays with a 6.4 per cent stake while it also controls 14.3 per cent of supermarket chain Sainsbury’s worth around £733million.

The Gulf state also signed a deal in May to funnel another £10billion into Britain over the next five years.

He also told a German newspaper that the tone being struck by some European countries was ‘very arrogant, frankly, and very racist’.

But the controversy shows no sign of going away and is likely to increase scrutiny around the influence of Gulf state cash swimming around the UK economy.

Labour MP Chris Bryant, a member of the House of Commons Foreign Affairs Committee, said the UK was an ‘open and welcoming country’.

But he said there was a risk that accepting money from countries such as Qatar presented a ‘real danger’ that Britain could be used for ‘money laundering and harbouring the ill-gotten gains of the super wealthy from the whole world over’. 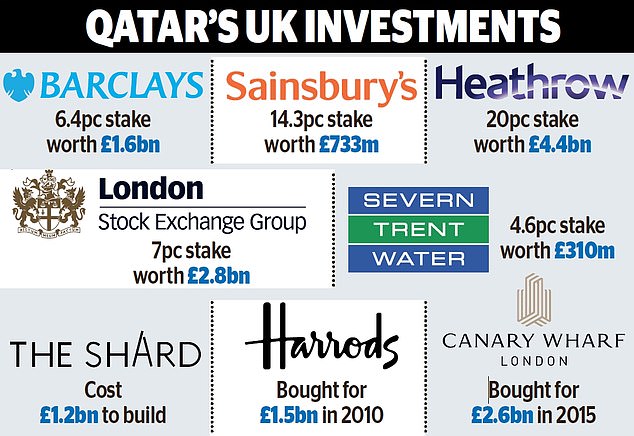 There is also growing regulatory scrutiny about the influence of Qatari financing of UK companies.

Last month, the Financial Conduct Authority announced plans to fine Barclays £50million after the banking giant failed to disclose a deal to pay £322million in advisory fees to Qatar, allegedly in exchange for a £4billion cash injection during the 2008 financial crisis to help the bank avoid a bailout from the Government.

The regulator said the bank’s conduct was ‘reckless and lacked integrity’. Barclays is appealing the penalty.

But opposition to the influx of Qatari cash, as well as the ongoing controversy around the World Cup, will be difficult for the Government to handle as it grapples with a growing energy crisis.

The Gulf state is one of Britain’s biggest suppliers of natural gas, a key fuel for the energy grid.

But Qatari money threatens to be the next chapter in a long-running list of controversies regarding the UK’s willingness to accept cash and investments from authoritarian regimes.

After the outbreak of the war in Ukraine, the spotlight was thrown on links between major British companies and the Russian economy as well as the interests here of oligarchs with ties to Vladimir Putin.

There have also been growing concerns about the influence of Chinese companies and investment following the brutal crackdown on pro-democracy protestors in Hong Kong in 2019.

Qatar will be hoping the World Cup burnishes its credentials on the global stage.

But it may instead bring renewed focus on its influence in the UK and around the world.