It was a warm day in late June 2013, and Trevor Porter was up the Dempster Highway, just past Tombstone Territorial Park.

“It was a little cloudy, sometimes the sun peeking through,” he recalled. “I think the Dempster is one of the most breathtaking places I’ve worked. Big mountains all around you — big valleys.”

At two spots just off the highway, Porter and a small team drilled for core samples. Using a diamond-tipped drill, they spun and melted their way into the permafrost.

The team could only drill about a metre at a time, pulling out each piece that was seven centimetres in diameter, and quickly putting it in a cooler. In all, they drilled five metres deep.

In those five metres was 13,600 years of Yukon history. 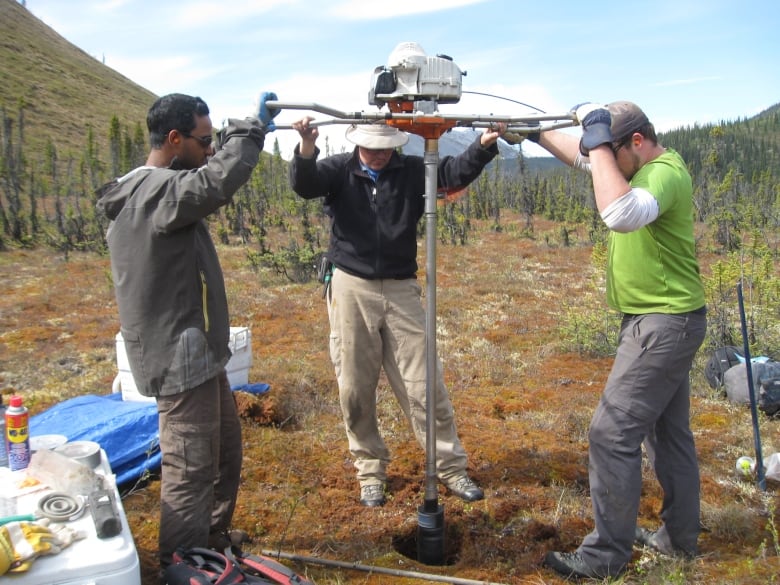 In June 2013, a team of researchers and students from the University of Alberta drilled a five metre-long sample of permafrost from a peat plateau on the Dempster Highway in central Yukon. (Trevor Porter)

The research on those cores was published last week in the journal Nature Communications.

Porter and his team were able to show that Yukon summer temperatures in recent decades are the warmest they’ve ever been in the 13,600-year period.

The report is just one of a series of recent studies indicating that Canada’s North is warming faster than the rest of the world. It confirms previous, separate research, but was also a groundbreaking form of permafrost analysis.

Research is first of its kind

The technique centres on studying water isotopes frozen in layers of ice. Prior to this, it was typically done with ice cores from glaciers. 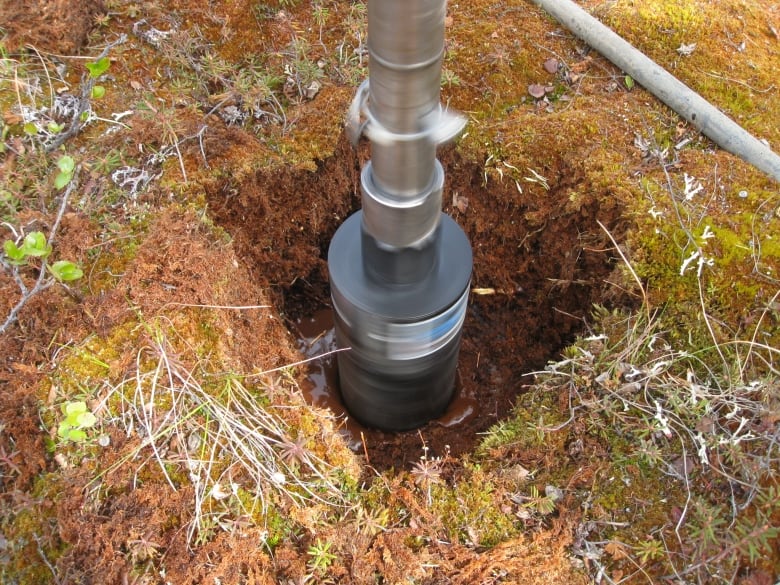 Different types of hydrogen and oxygen atoms preserved in the ice indicate either warm or cold temperatures.

By analyzing the different atoms, scientists can calculate the temperature at the time the water fell onto the surface.

“[The study] kind of shows the world, shows the research community that, ‘Wow, look, you can do this in places that don’t have glaciers,'” said Porter.

“And that’s really exciting for me.”

The successful new technique and the study’s disarming revelations for Yukon are thanks to the team’s six years of analysis and data processing in academic labs — but their roots stem from that lush and muddy summer 2013 research trip.

That’s really more justification for us to get out there and save these records before they’re all gone.– Trevor Porter, University of Toronto Mississauga

‘It still feels special to hold in my hands’

Porter and his team spent three weeks based out of Dawson City that year, working on a variety of different projects.

They lived in cabins next to the Yukon River, spent the day working hard in nature, and fell asleep exhausted but invigorated after dinners spent around a picnic table next to their open cook house. 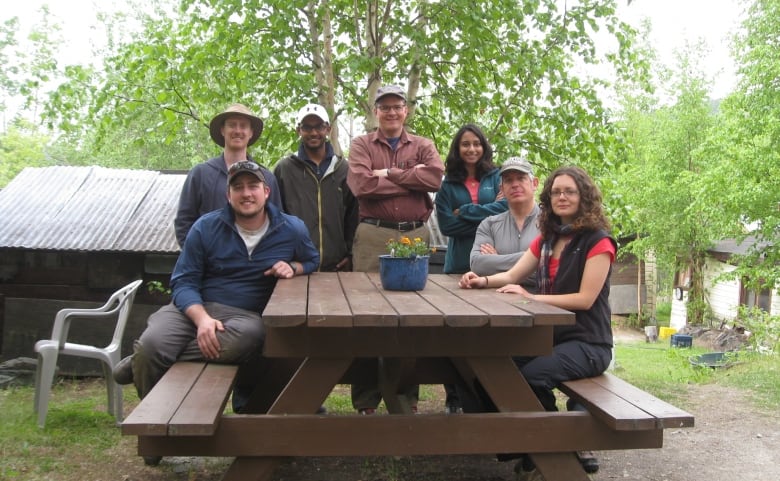 Researchers and students from the University of Alberta at their base camp in Dawson City, Yukon in June 2013. (Trevor Porter)

“It’s my favourite time of year, really. You know, we have a lot of very serious jobs around the university, teaching and grading and [going to] meetings,” said Porter.

“But going into the field is just nothing else really matters.”

He said they all felt the significance of the “incredible archive that’s coming out of the ground.”

Porter admitted he’s used to working on samples that are “a lot older” than 13,600 years.

“But it still feels special to hold in my hands and say, ‘Look. This is a really important time period that we’re going to be able to understand with this sample.'” 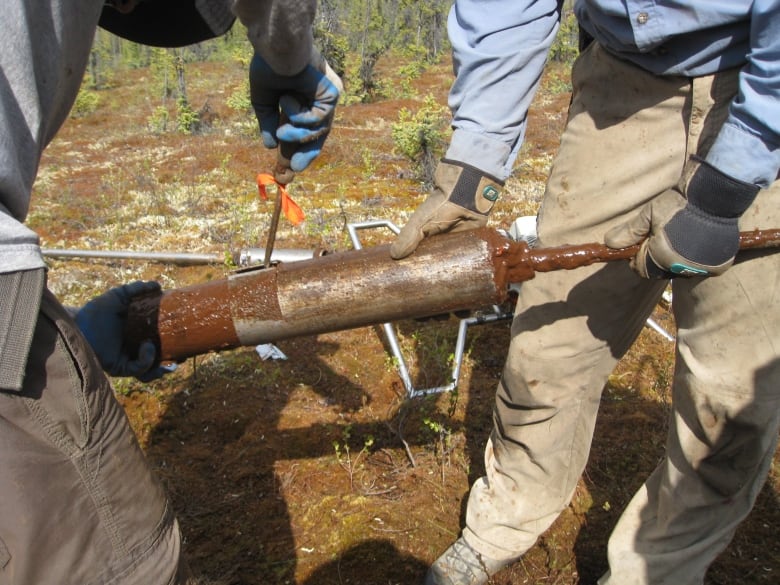 Porter said his team recognized the significance of the ‘archive’ they were pulling out of the ground. (Trevor Porter)

After spending time in a chest freezer in Dawson, the cores were shipped to the University of Alberta.

They were split lengthwise. One half was preserved as an archive, the other half was sliced into centimetre-thick little half moon pieces which are allowed to thaw. The water was filtered, processed and analyzed.

The team needed to gather more context and information to be able to interpret the data, but Porter said they saw a very strong trend from the very beginning.

After calculating temperatures in central Yukon for the last 13,600 years, Porter and his co-authors said in a news release that it is clear “industrial-era warming has led to current summer temperatures that are unprecedented” and exceed “all previous maximum temperatures by nearly 2 degrees Celsius.” 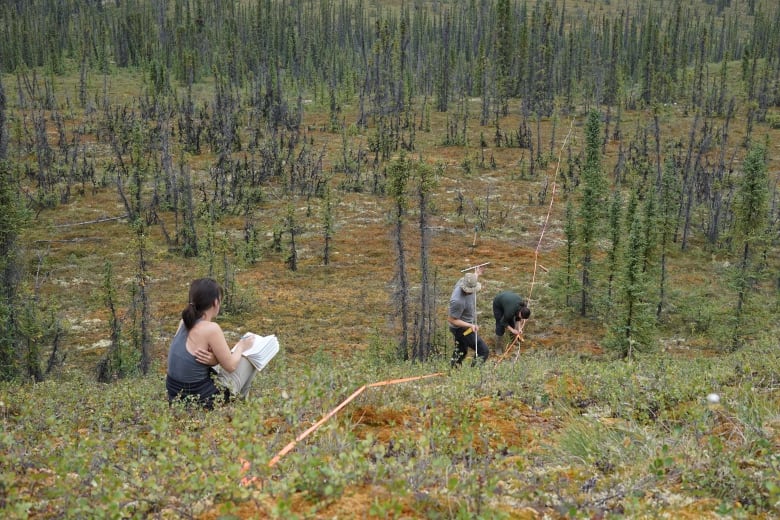 Porter and his team were able to show that high temperatures in Yukon are the warmest they’ve ever been in nearly 14,000 years. (Trevor Porter)

Porter’s technique works, but the warming trend it reveals also puts the very permafrost it relies on at risk.

“Some of these sites will reach these critical temperatures where they just start thawing, and you do start losing that record,” he said.

“I guess that’s really more justification for us to get out there and save these records before they’re all gone.”