It is thought the corridors will use concealed cameras to scan people’s faces as they walk through, and compare them with a digital database of details that all visitors will have to submit before travelling – possibly via an app.

If a match is found, they will be cleared for entry into the UK without having to stop or scan their passport, while those that don’t match will be redirected back to customs.

The UK government will be trialling the corridors at airports in 2024, prior to a full rollout planned for 2025.

The new automated border screening system would replace having to go through an eGate or speaking to a Border Force officer.

The UK government hasn’t revealed which companies it is working with on the new contactless corridors, but San Francisco firm Paravision outlined a blueprint for such a system in a recent video.

After passengers have exited the plane, they’ll be able to walk down the corridors and be cleared for entry into the UK, without having to stop or scan their passport

HOW DO THE CONTACTLESS CORRIDORS WORK?

The UK government will be trialling the corridors at airports in 2024, prior to a full rollout planned for 2025, which would scan people’s biometric details.

After passengers have exited the plane, they’ll be able to walk down the corridors and be cleared for entry into the UK, without having to stop or scan their passport.

Cameras inside the contactless corridors would be constantly scanning the face of every passenger arrival after they’ve departed the plane.

Faces would then be matched up with a digital database of details that all visitors will have to submit before travelling, possibly via an app.

The new automated border screening system would replace having to go through an eGate or speaking to a Border Force officer.

Jake Moore, a security advisor at ESET, told MailOnline that the experience could be similar to Amazon Fresh, which uses cameras and depth-sensors to tell what items shoppers are picking up.

At an airport, cameras could be concealed in the walls or even on the ceiling, and would be barely noticeable by passengers as they walk towards the exit.

‘This must be like contactless shopping, maybe with some added facial recognition aligned with the photo on the passport,’ Moore told MailOnline.

‘But it doesn’t sit right with me – these databases with our most private information on them are an increased risk the more widely they are used.’

James Bore, tech expert and security consultant at Bores Group, said such a system could misidentify people based on their facial appearance.

‘If you’ve grown a beard on holiday or had some sort of visual change, that might mean the technology won’t recognise you where a human could,’ Bore told MailOnline.

‘It might cause more hassle at border control in the same way having an unexpected item in the checkout area causes issues if there’s no one around to manually verify that you are you.’

Claire Fox, Member of the House of Lords, also told GM Britain: ‘It’s great to have a technological solution here, and people are getting fed up [of airport queues], but there will be job losses as a consequence of this. 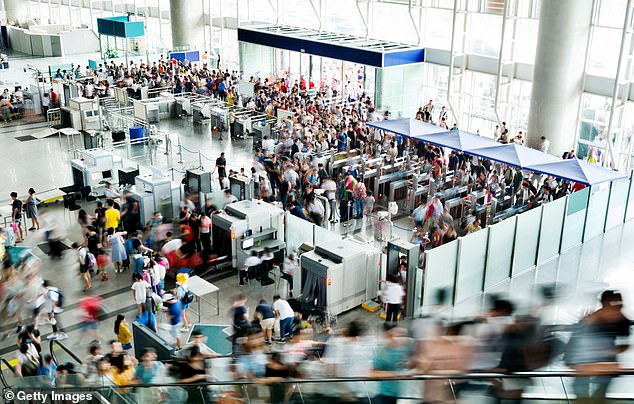 The UK government wants to speed up the process of getting passengers through its airports and ‘deliver the world’s most effective border’.

Biometrics are any metrics related to human features.

The most common examples of a biometric recognition system is the fingerprint and facial recognition technology.

Every time you unlock a smartphone screen with a facial recognition, ask Siri for a weather update, or log in to your online bank account using your fingerprint, you’re using biometrics.

As part of the ‘contactless corridor’ system in Paravision’s video, passengers have to upload their details and authenticate their identity on an accompanying app prior to travel.

These details include name, address, travel details and a photo taken by a smartphone.

Also submitted to the app prior to travel are Covid test results, vaccine status, an image of a passport or driver’s licence, and even a scan of the passport’s built-in chip, to authenticate a person’s identity.

Having uploading their details on the app, Paravision’s video shows airline passengers heading straight to the ‘wide and welcoming’ contactless corridor.

People who are not ‘biometrically authenticated’ are diverted by staff out of doorways in the corridor and asked to use the standard passport system instead.

Citizens of any country could potentially walk down the corridors to gain entry to the UK.

But for non-British or Irish citizens, passengers would have to complete and pay for an electronic travel authorisation (ETA) on the app prior to arrival, as part of Patel’s plans.

This is similar to the USA’s Electronic System for Travel Authorisation (ESTA) application, introduced after the 9/11 terror attacks to determine the eligibility of visitors.

The ETA will be checked against a variety of security databases, such as watch-lists and police records, to ensure visitors don’t pose a threat to the UK.

The Home Office would also be able to bar applicants if they have a jail sentence of more than a year, are persistent offenders, pose a risk of serious harm or where it would not be conducive to the public good. 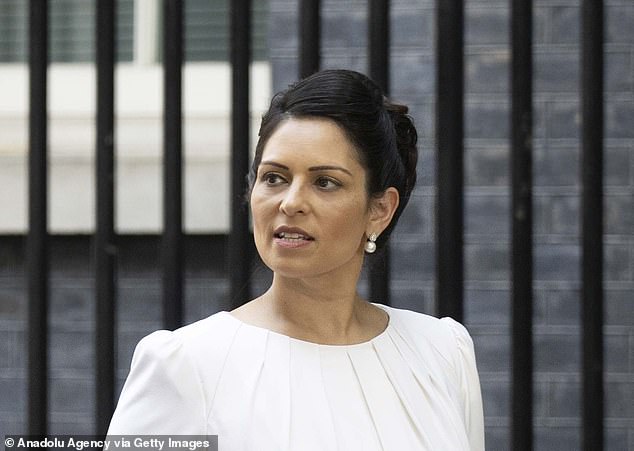 The ETA will mean it will it is ‘easier for our friends to come to and contribute to the UK, but harder for those we do not want to come’, according to the government.

‘As Home Secretary I have been focused of taking back control of our immigration system through my New Plan for Immigration,’ Patel said.

‘This includes ensuring we have a border that is fit for the 21st century which allows travellers to get a visa and pass through the border easily, while maintaining national security.

‘I am also committed to ensuring our fantastic Border Force are given access to the most up to date automation technologies so they can use their specialised skills on protecting our border from those who seek to harm the UK.’

Travellers boarding without British or Irish passports will be told to apply for an ETA or e-visa from next year, The Times reports.

HOW DOES FACIAL RECOGNITION TECHNOLOGY WORK?

Facial recognition software works by matching real time images to a previous photograph of a person.

Each face has approximately 80 unique nodal points across the eyes, nose, cheeks and mouth which distinguish one person from another.

A different smart surveillance system (pictured) can scan 2 billion faces within seconds has been revealed in China. The system connects to millions of CCTV cameras and uses artificial intelligence to pick out targets. The military is working on applying a similar version of this with AI to track people across the country

This produces a unique numerical code that can then be linked with a matching code gleaned from a previous photograph.

A facial recognition system used by officials in China connects to millions of CCTV cameras and uses artificial intelligence to pick out targets.

Experts believe that facial recognition technology will soon overtake fingerprint technology as the most effective way to identify people.