EXPRESS INFORMER > Health & Medicine > How old is YOUR heart? As GPs are told to prescribe more statins, take the test to assess your risk

GPs will prescribe statins to anyone who wants them under new guidance aimed at preventing thousands of heart attacks and strokes, it was revealed yesterday.

NHS drug watchdogs have effectively axed the eligibility criteria for the life-saving pills after a major review concluded they are safe and rarely cause side-effects.

Up to now, doctors were told to only offer the drugs to patients with a 10 per cent or higher risk of suffering a heart attack or stroke within a decade.

But, do you know whether you’re at risk of being struck down by either killer?

SCROLL DOWN TO TAKE THE TEST

The NHS Heart Age calculator asks people their age, weight and height as well as basic information about their blood pressure, cholesterol and medical history. The test, available on its website or lower down in this MailOnline article is for adults aged between 30 and 95

The NHS has a free two-minute online test that could help save your life.

The test, available on its website here or lower down in this MailOnline article is for adults aged between 30 and 95.

It checks how their ‘heart age’ measures up against their actual age.

The tool helps people predict the age they are likely to develop heart disease in the next 10 years, after considering simple lifestyle information, including height and weight.

Users are asked to enter basic details, including their age, height, ethnicity, weight and postcode.

It also considers blood pressure, if known, cholesterol level and whether they have ever needed medication for high blood pressure.

As well as the results, the NHS calculator also provides health advice about blood pressure, cholesterol and weight, based on the data provided.

It comes after the National Institute for Health and Care Excellence (Nice) yesterday updated its statins guidelines.

What are statins and why are they controversial?

Statins are a group of medicines that can help lower levels of ‘bad cholesterol’ in the blood.

Statins work by stopping the liver from producing as much LDL.

Previous studies have found that the drug will prevent one heart attack or stroke for every 50 people taking it over five years.

The drug comes as a tablet that is taken once a day.

Most people have to take them for life, as stopping will cause their cholesterol to return to a high level within weeks.

Some people experience side effects from the medication, including diarrhoea, a headache or nausea.

People are usually told to make lifestyle changes in a bid to lower their cholesterol — such as improving diet and exercise habits, limiting alcohol consumption and stopping smoking — before being prescribed statins. 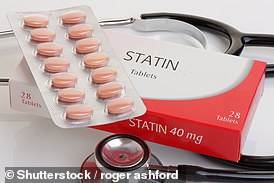 It means as many as 15million more adults can now request the 2p-a-day tablets on the NHS.

A landmark study last year revealed statins have been wrongly blamed for muscle pains that are really a symptom of old age.

The University of Oxford researchers showed ‘definitively’ that warnings about the potential side-effect are unfounded and people’s complaints are largely ordinary niggles, which are often the result of ageing or being too active.

The ‘gold standard’ study, published in the Lancet, involved 155,000 patients and found an almost identical risk of muscle pain in people not taking statins.

Nice yesterday said the ‘evidence is clear’ that statins are an ‘appropriate choice’ for people who want to reduce their risk of disease.

Sir Chris Whitty, the UK’s chief medical officer, recently warned that thousands of middle-aged people are dying of heart conditions because they did not get statins or blood pressure medicines during the pandemic.

CVD, which includes heart attacks and strokes, kills more people across the world than any other illness.

The World Health Organization estimates 18million people are killed by the condition every year, accounting for over 30 per cent of all global deaths.

In the UK, CVD is responsible for a quarter of all deaths, or around 160,000 deaths each year.

This is an average of 460 deaths each day, or a shocking one in every three minutes.

The British Heart Foundation estimates that more than seven million people are now living with CVD in the UK.

According to the charity, the total annual healthcare cost of cardiovascular disease in England is £7.4billion.

In the United States, CVD contributes to every one in five deaths – or around 697,000 – each year, the Centres for Disease Control and Prevention also approximate.

One person is believed to die every 34 seconds from the disease.

What IS bacterial meningitis? Everything you need to know about bug that kills up to one in 10 people who catch it after death of legendary guitarist Jeff Beck