Voters were supposed vote in a provincial election in Newfoundland and Labrador Saturday. But even before Friday night’s shocking news of the discovery of a coronavirus variant in St. John’s, the entire election was already in disarray.

With astonishing speed, Newfoundland and Labrador — which at times has had no active cases of COVID-19, and only weeks ago had routinely reported daily new cases that either one or zero — has been consumed by a new wave of cases that will likely command attention of public health leaders across Canada.

The explosive outbreak in the St. John’s region this week culminated with Chief Medical Officer of Health Dr. Janice Fitzgerald reporting that a case of the variant known as B117 has been confirmed Friday night.

Fitzgerald immediately put the whole of the province under what’s called Alert Level 5, the strictest lockdown provisions under provincial public health protocols. The St. John’s area had been put under similar orders earlier in the week. The orders mean that all businesses except those that sell essential goods like groceries and pharmaceuticals must close.

The announcement had a quick impact on the provincial election. Elections Newfoundland and Labrador suspended in-person voting that had been scheduled for 22 of the province’s 40 districts. Such voting had already been scrubbed for the other 18 districts earlier this week. All of those districts are on Newfoundland’s Avalon Peninsula, home to St. John’s and other communities. 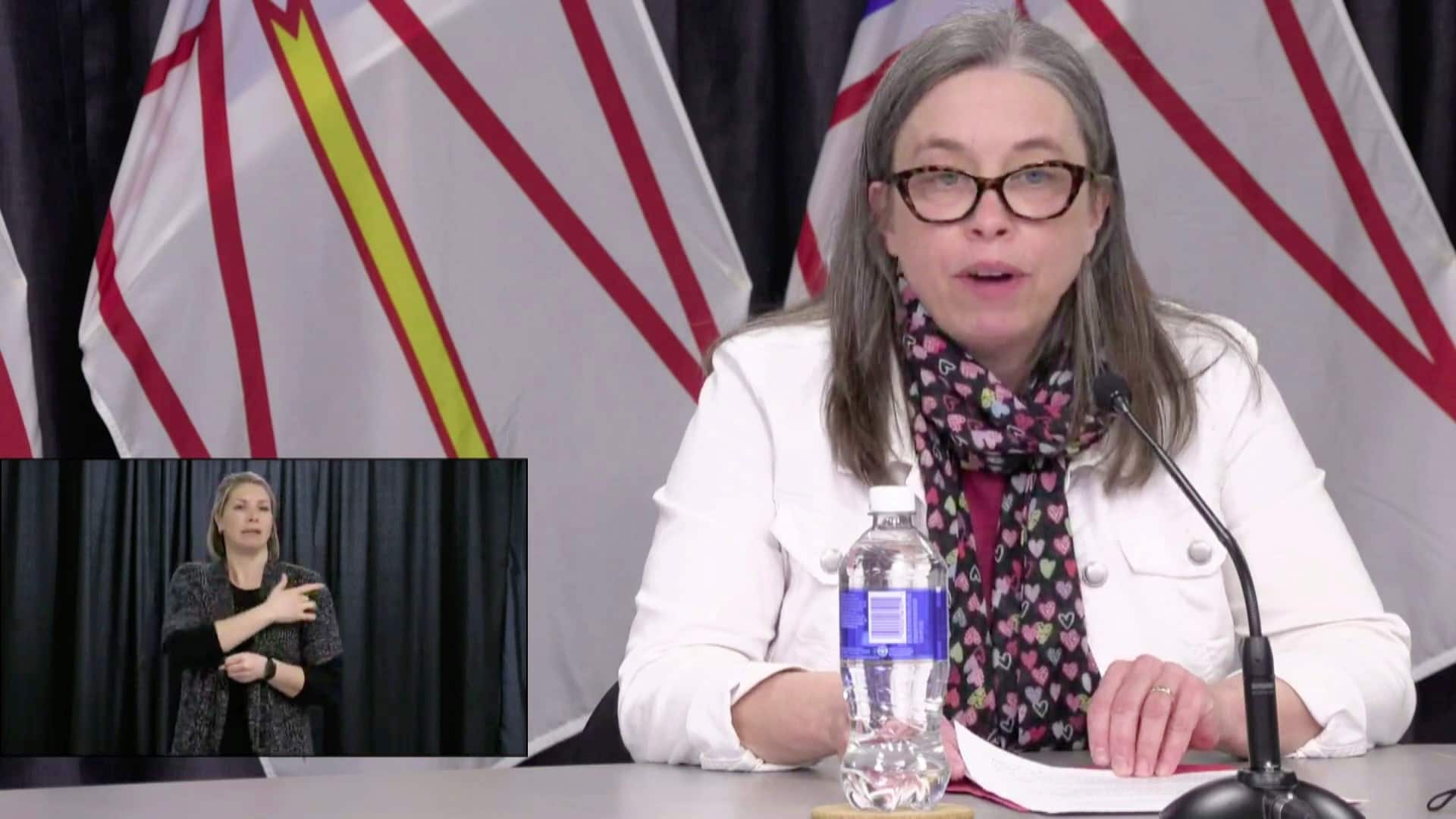 “In-person voting will not be rescheduled,” Chaulk said in a statement late Friday night.

Voters now will need to apply online for special ballot kits. Chaulk has extended the deadline for that to Monday at 8 p.m. NT.

Ballots must then be mailed and received by Elections NL before or on March 1.

It’s not yet known how or when the results of the election will be announced.

The COVID-19 situation was markedly different when Premier Andrew Furey called the election on Jan. 15. In the two weeks before the writ was dropped, Newfoundland and Labrador had recorded only four cases.

Opposition politicians have been fiercely critical of Furey for pushing for an election in midwinter, and with an unresolved pandemic sill raging elsewhere in the country.

Throughout the week, Furey faced pointed questions from reporters about his decision to call a 28-day campaign. “Are you prepared to own the decision to go now, and the problems that it has caused?” one reporter asked Furey on Thursday.

“Well, the decision was mine,” said Furey. “The problems — no one could have predicted where we would be today.”

Medical experts, on the other hand, say the emergence of highly contagious variants such as B117, which first emerged in the United Kingdom, need to be kept at front of mind.

“This is just another example of how we’ve underestimated this,” Rod Russell, who teaches immunology at Memorial University’s Faculty of Medicine, told CBC News Saturday.

“The variant was already here. I think we should have known that. Because what was happening this week was clearly different than anything we’ve seen before,” he said.

“The spread was wildlfire, basically.”

Newfoundland and Labrador went into lockdown last March amid one of the first COVID-19 clusters reported in Canada. At least 167 cases were connected to a single outbreak involving Caul’s Funeral Home.

Fitzgerald’s strict measures and public health orders — including a still-controversial ban on incoming travellers, who must apply for approval to enter the province — have been credited with keeping COVID-19 infection rates the lowest in the country.

All that changed last weekend. On Sunday, the province started announced escalating numbers of new infections — many of them involving adolescents and teenagers in Mount Pearl, a city adjacent to St. John’s.

The province’s total number of cases since the start of the pandemic leapt to 600 on Friday, up from 416 on Feb. 7.

Confirmation of the variant, Fitzgerald said Friday night, was motivation to move as quickly as possible.

“This variant is more infectious than the original strain of SARS-CoV-2, and we’ve seen how rapidly it has spread in facilities and elsewhere in the country,” she said.

“This is concerning and serious, but we have the ability to overcome it. We know that public health measures work against this virus, even variants of concern.”

Unprecedented twists in an election campaign

For the first time in Canadian history, in-person voting in a provincial election has now been halted.

Chaulk has ruled that candidates can continue campaigning, although anything from now until March 1 will be entirely virtual.

Furey, who has been leading a minority government since he succeeded Dwight Ball last August, is required by a provincial law that is evidently unique among the provinces to call an an election within 12 months of being sworn in. (That law was introduced during the government of Tory Danny Williams, who frequently complained that his predecessor, Liberal Roger Grimes, governed for more than two years without seeking a mandate of his own.)

Furey has repeatedly said that he made a calculated decision to go the polls when infection rates had been low and stable. He also has said he doesn’t think herd immunity will be achieved by the time an August election would have to be called.

Both PC Leader Ches Crosbie and NDP Leader Alison Coffin have repeatedly criticized Furey for forcing people to vote in a pandemic — and say he is the one accountable for how the election is ending.

“If there’s heat on Andrew Furey, it’s completely of his own devising,”  Crosbie told CBC News earlier this week.

On Friday night, Coffin said the blame for the election fiasco lies entirely with Furey.

“We may see some court challenges come from this,” Coffin said. “What I’m more concerned about is how irresponsible Andrew Furey’s actions were.”

Mail-in voting has already proven to be more popular than in the past.

In advanced poll data released earlier this month, Elections NL said 33,523 people had already voted, well above the 21,289 in the May 2019 election. The agency pegged the number of eligible voters at 368,135.

Furey, meanwhile, is not the only Canadian leader who has gone to the polls in the pandemic. Nor is he the only premier with a minority government who has sought a majority.

In New Brunswick, Progressive Conservative Premier Blaine Higgs won the snap election he called for Sept. 14, converting a minority government to a majority.

In October, the NDP’s John Horgan repeated that feat in British Columbia. Later that month, Saskatchewan Premier Scott Moe stuck with fixed-date legislation and led the Saskatchewan Party to its fourth straight majority.

When the House of Assembly dissolved in Newfoundland and Labrador last month, Furey’s Liberals held 19 of the 40 seats. There were 15 Progressive Conservatives, three New Democrats and three Independents.