You can take the boy out of Brisbane, but you can’t take Brisbane out of the boy.

While Aussie Cam Smith is the toast of the golfing world today after his enormous composure under fire to claim the British Open, he will always have a bogan streak that sets him apart from everyone who won the Claret Jug before him.

In fact, his caddie Sam Pinfold said that Smith drew on the famous Queensland Maroons fighting culture in State of Origin to hold off Rory McIlroy and Viktor Hovland to win the sport’s oldest and most prestigious title.

‘That’s the Queenslander in him; I think he drew a lot from that,’ Pinfold told Golfer’s Digest.

‘He’s never really (labelled) as a favourite or as one of the big dogs. But he loves a fight. Put him three or four shots back, and he’s going to step up his game and go for it.’ 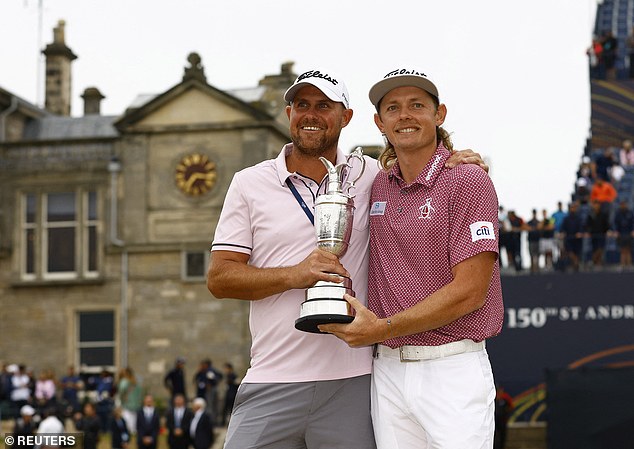 Cameron Smith poses with his caddie, Sam Pinfold, and the Claret Jug after winning The Open

That feisty streak was ingrained in him long before he celebrated victory at the prim and proper St Andrews, which declares itself to the ‘Home of Golf’.

One of the first things Smith bought when became rich and famous was every bogan’s dream – a 39-foot fishing boat, powered by four gigantic Mercury outboards.

It is docked outside his Florida home, on the canal, so he can go fishing in style whenever he wants.

His mother Sharon spent most of her life working in the furniture department at the now-defunct Chandlers chain of stores, before entering semi-retirement as a grocery packer at Woolworths.

His sister Melanie works in administration for a power company.

His dad Des, a handy professional golfer in his own right, bawled his eyes out when his son claimed victory at St Andrews and promised that many XXXX stubbies would be in danger later that day.

Smith wanted to emulate his father from a young age, so Des cut down a set of clubs and strapped some PVC tubes to the side of his cart so his son could join him.

By age 12, Smith was beating his dad.

‘Nothing surprises me anymore; he is so talented and has put so much hard work in,’ Smith snr said.

Growing up was a simple, no-fuss kind of life. There wasn’t a lot of money in the bank but the Smiths had plenty of love for each and the simple things in life.

When Smith won the 2022 Players Championship earlier this year, it was his biggest payday. A cheque for $5.25million was more money than the entire family would see in a lifetime, and he’s now added the $3.7million first prize at St Andrews.

Thinking of growing a mullet now…

Smith admitted ‘some people would have called me probably lazy before maybe a year ago’ after collecting the Claret Jug.

His dad Des said the 28-year-old got serious about his fitness and improving his driving around 18 months ago, when he and his trainer Nick Randall embarked on a tough boot camp during the pandemic.

Randall said his charge ‘was in consistent pain and discomfort’ from the time he was 16 because he didn’t take exercise seriously enough.

‘I lost a little bit of weight and my body moves a little bit quicker when I don’t have so much around my belly,’ Smith said.

The turnaround was one of the keys to his first victory in a major, which will send his profile skyrocketing.

Fortunately, the mullet-sporting champion will always be kept grounded by his friends and family – even now that golf’s original wild boy, John Daly, has tweeted to congratulate him and joked, ‘Chalk another win for the mullets!’

One of his best mates from school at Pine Rivers State High in Strathpine in Brisbane’s north is Jack Wilkosz. He was a council worker until Smith told him to pack his bags and come to the States to work for him. 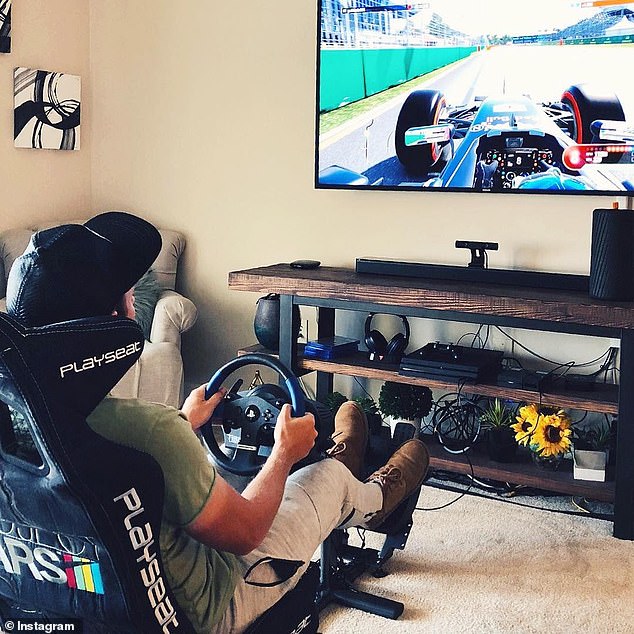 Smith takes his racing seriously, ditching the video game controller for a full-fledged simulator setup on his PlayStation

Now, Wilkosz helps care for Smith’s Florida mansion, prepare the epic fishing boat with bait, rods and plenty of ice and travel to tournaments as a kind of personal assistant.

However Wilkosz reckons his main job is to ensure his mate never turns into a ‘knobhead’.

‘I think a big part of my job is for Cam to have a good mate over here to have a yarn with,’ he told News Corp.

When Golf Monthly recently did a profile on Smith, they revealed some facts about the boy from Brisbane that might have shocked some of his fans in the US.

They would come as no shock to anyone living in Brisbane today, though. 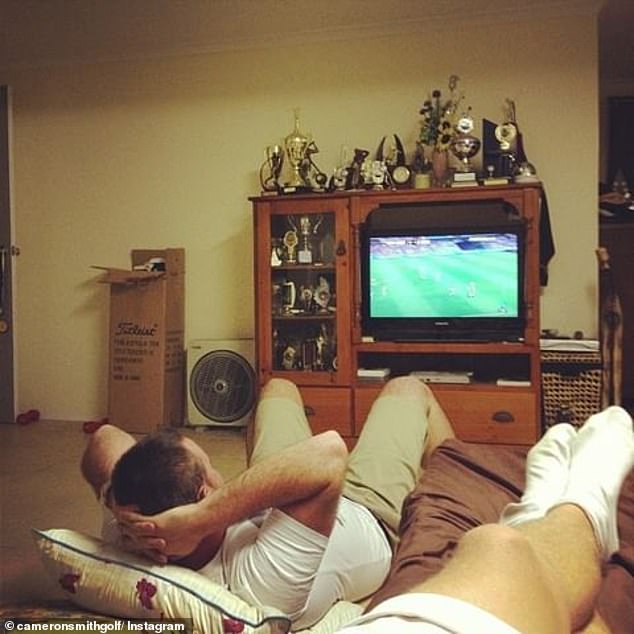 He lists his favourite sporting team as the Brisbane Broncos in the NRL, admits he is a big ‘petrolhead’ and is an amateur mechanic who loves working on classic cars. Like any proud Queenslander, maintaining his lawn is a great passion.

When Smith won the Players Championship his mother and sister were there to celebrate to a teary and boozy night at his Jacksonville home.

‘My main priority was just to hang out with them and golf was second for these few weeks,’ he said, after not seeing them for two years because of Covid.

Likewise, when he claimed The Open, the Australian fans that travelled so far to cheer him on were the first people he thanked.

While some of the old firm might turn their noses up at the waterfall of hair that cascades out Smith’s Titleist cap, the mullet is a permanent reminder of where Smith comes from.

He will always be the boy from Brisbane who loves beer, fishing, footy, cars, family and mates and – most importantly – giving his all to his greatest passion of all, golf.