EXPRESS INFORMER > Business & Finances > How much income do you need for retirement?

Poorer pensioners have borne far heavier increases in living costs than better off retirees over the past year, new research reveals.

Retirees on low incomes have to spend more of their budget on food and energy which have become much dearer, explains the Pensions and Lifetime Savings Association.

These are based on different baskets of goods and services like food and drink, transport, holidays, clothes and social outings.

Retirement income needs for single people. Scroll down to find out what couples require for a decent old age (Source PLSA)

The study also, crucially, explains how much younger generations need to have saved by the time they give up work to reach a decent standard of living in old age.

The substantial pressure on working age and retired households, particularly those on low incomes, underlines why the Government was right to increase the state pension in line with the triple lock, says the PLSA.

That falls £2,200 – almost £200 per month – short of the annual income the PLSA says people need for a minimum retirement standard.

This is the sum that an individual will need, but the combined purchasing power means that a couple need less than double that at £19,900 between them.

The PLSA, a finance industry-backed body, also notes that higher interest rates will help alleviate cost pressures as savers are able to get more attractive rates on annuities for their retirement pots. They are also getting better rates on savings accounts.

How have retirement living costs jumped and why?

Rising prices have affected some goods and services more than others, with a knock-on impact on retirees at different income levels, explains the study carried out for the PLSA by the Centre for Research in Social Policy.

The headline inflation rate was 10.7 per cent in November, a slowdown from 11.1 per cent in October.

This reflects what people think is required to cover a retiree’s needs, not just to survive but to live with dignity, and enjoy some social events.

‘Rising food and fuel prices contributed significantly to the increase in the minimum standard,’ says the PLSA.

‘The update also saw the amount of food included within the budget increasing to bring it into line with the up-to-date nutritional research on a healthy diet.

‘The disproportionate increase in the cost of retirement for those on the Minimum Retirement Living Standard means the Government’s commitment to the state pension triple lock is especially important.’

A couple who each receive a full new state pension of £10,600 a year from April, would reach the minimum income level, but a single person would have to supplement this with private pension savings of £36.500.

How are pot sizes calculated?

Most retirees now prefer to invest their pots and live off the income, but they then have to shoulder financial market risk.

Read our guides to investing your pension, and combining drawdown and annuities.

A couple both receiving a full new state pension would also need to accumulate retirement pots of £121,000 each, but a single person with only one state pension coming in would have to save a much bigger pot of £248,000.

‘Retirees can expect to have more luxuries like regular beauty treatments, theatre trips and three weeks holiday in Europe a year,’ says the PLSA.

A couple both getting full new state pensions would also need retirement pots of £328,000 each, while a single person would need to save £530,000. 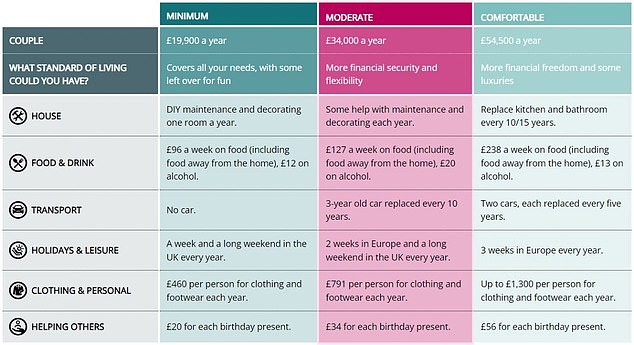 What trends in living costs did the study uncover?

The 130 per cent increase in the weekly cost of domestic fuel between 2021 and 2022 has been the most significant factor in hiking living costs across the three income levels, according to the PLSA.

‘The increase in the weekly cost of domestic fuel accounts for between 30-40 per cent of the increases in the overall budgets for a minimum, moderate and comfortable living standard in retirement,’ it says.

It also found that increases in motoring costs at the moderate and comfortable levels, caused by price rises in second-hand cars, petrol and diesel, have resulted in a 16 per cent boost to this element of budgets. At the minimum income level, it is assumed people use public transport.

‘Expenditure on food and fuel are categories that have seen significant price rises over the year and account for around a third of the budget at a minimum, compared to around a quarter at the moderate and comfortable levels,’ adds the PLSA.

‘The absence of being able to socialise during Covid lockdowns has reinforced for many the need to be able to devote some budget to social activities as a way of participating in society.

‘All budgets include some expenditure on social and cultural participation, accounting for a fifth of the minimum income standard budget but a larger proportion of the moderate and comfortable levels.’