EXPRESS INFORMER > News & Politics > How much Anthony Albanese will be paid Australia’s new prime minister with pay rising to $549,250

Newly-elected Prime Minister Anthony Albanese has been rewarded with a 40 per cent pay rise for his new role, with his ministers now being paid huge six-figure salaries.

Deputy PM Richard Marles – who is now Acting Prime Minister with his boss in Tokyo –  is on a very attractive package of $433,063.

Treasurer Jim Chalmers will be on $396,094 to manage Australia’s government debt, as it approaches $1trillion.

The Labor leader (centre) will see his salary jump to $549,250 – a big rise from his $390,813 salary as Opposition Leader. Deputy PM Richard Marles (second right) is receiving $433,063. Treasurer Jim Chalmers (far left) will be on $396,094.  Foreign Minister Penny Wong (second, left) is getting $369,688 as a cabinet minister balancing being Leader of Government Business in the Senate. Finance Minister Katy Gallagher (far right) will receive $364,406

Foreign Minister Penny Wong is getting $369,688 as a cabinet minister balancing being Leader of Government Business in the Senate and dealing with China’s aggression.

Their stroke of good fortune comes as the typical Australian worker suffers a pay cut in real terms because of soaring inflation and $2-a-litre petrol prices.

Australia’s most five senior cabinet ministers, sworn in on Monday, are paid at least four times Australia’s average, full-time salary of $90,917 under terms dictated by the independent Remuneration Tribunal.

Labor is likely to have a bare majority in the House of Representatives, with Saturday’s election occurring just three days after official data revealed wages in the year to March rose by just 2.4 per cent. 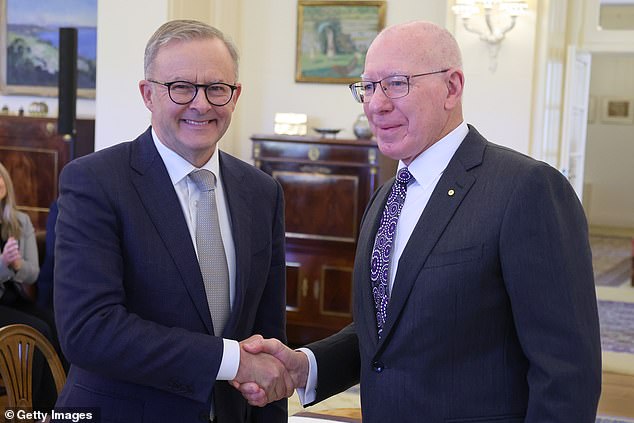 That was less than half Australia’s headline inflation rate of 5.1 per cent during the same period, which was the fastest pace of consumer price increases in 21 years, Australian Bureau of Statistics data showed.

This meant most workers effectively suffered a pay cut as their wages failed to keep pace with price increases, with average petrol prices now back above $2 a litre despite a six-month halving of the fuel excise to 22.1 cents a litre in the March 29 budget.

Mr Albanese during the election ‘absolutely’ promised he would support the Fair Work Commission if it gave a 5.1 per cent rise to minimum wage earners.

Reserve Bank of Australia Governor Philip Lowe is on a $1,076,029 remuneration package.

Departmental secretaries are also paid more than cabinet ministers with the head of Prime Minister and Cabinet Phil Gaetjens on $944,829, although he is expected to be replaced with Labor seeing him as too closely aligned with the Liberal Party.

Greg Moriarty gets $963,428 as the Secretary of the Department of Defence but Chief of the Defence Force Angus Campbell is paid even more, $1,034,315.

Governor-General David Hurley on Monday swore in a five-member interim cabinet so Mr Albanese could attend the Quad, or Quadrilateral Strategic Dialogue, in Tokyo with his Japanese counterpart Fumio Kishida, India PM Narendra Modi and US President Joe Biden. 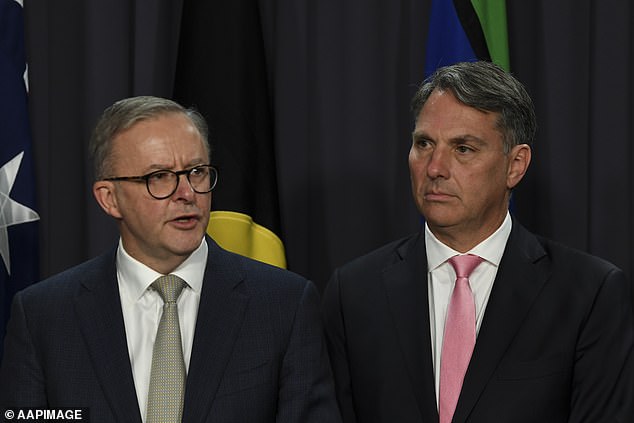 The group was formed to counter China’s territorial aggression in Asia, especially in the South China Sea.

Mr Albanese’s swearing in as PM, just two days after the election is unusually rapid.

It is even faster than Gough Whitlam’s swearing in as Labor PM on December 5, 1972 – just three days after the election that ended 23 unbroken years of Coalition rule.

For the next fortnight, he was a PM with 10 other portfolios as he ran Australia with his deputy Lance Barnard as part of a two-man ‘Duumvirate’.

In 2022, the two most senior members of the five interim cabinet ministers have separated from another Labor politician.

Mr Albanese’s estranged wife Carmel Tebbutt was New South Wales deputy premier from 2008 to 2011 and they simultaneously held the overlapping federal and state seats of Grayndler and Marrickville in Sydney’s inner west.

They hold the adjacent federal and state seat seats of Corio and Bellarine on either side of Geelong, south-west of Melbourne.

Mr Chalmers is the husband of Laura Chalmers, a Courier-Mail journalist in Brisbane previously known as Laura Anderson who was Senator Wong’s media adviser when she was climate change and later finance minister under Labor PMs Kevin Rudd and Julia Gillard.

Like his boss Mr Albanese, he had been a political staffer before being elected to Parliament, previously serving as former treasurer and deputy prime minister Wayne Swan’s chief of staff.

The Prime Minister had been a research officer for left-wing federal Labor minister Tom Uren during the 1980s when Bob Hawke was Labor PM.