EXPRESS INFORMER > News & Politics > How long will it take for the Covid vaccine to come to the rescue and get Britain out of lockdown?

Britain may not be free of coronavirus restrictions until next winter unless the NHS hits its ambitious target of vaccinating 2million people every week, it is feared.

Ramping up the inoculation drive to reach the target means it would still take until April for everyone over the age of 50, adults with serious illnesses, and millions of NHS and social care workers to get their first dose.

But it would take another 15 weeks for the same Britons to get the second dose they need to offer them as much protection against the disease as possible, meaning the deadline won’t be hit until August at the earliest.

Number 10 could, however, ease restrictions before then, if they believe they have protected enough of the population to prevent hospitals being overwhelmed.

But there are still huge questions about whether the NHS will be able to hit 2million jabs a week target, which scientists say Britain needs to get to ‘very quickly’ to have any hope of a normal summer.

AstraZeneca bosses have pledged to deliver the milestone figure of doses a week by mid-January. And the NHS has promised it will be able to dish them out as quickly as it gets them.

However there already appears to be cracks forming in the supply chain. Only 530,000 doses of the Oxford coronavirus vaccine will be available for vulnerable people this week, despite officials promising at least 4million just weeks ago.

Boris Johnson says the roll out was being stalled because officials were waiting for batches of the jab to be approved by the regulator, while Matt Hancock has blamed AstraZeneca for being too slow to manufacture the doses.

The PM is due to address the country tonight at 8pm, when he is expected to put the country into a third national lockdown amid spiking infections and admissions, with vaccines now the only way out of the endless cycle of lockdowns.

Brian Pinker, 82, became the first person in the world to receive the Oxford University vaccine today 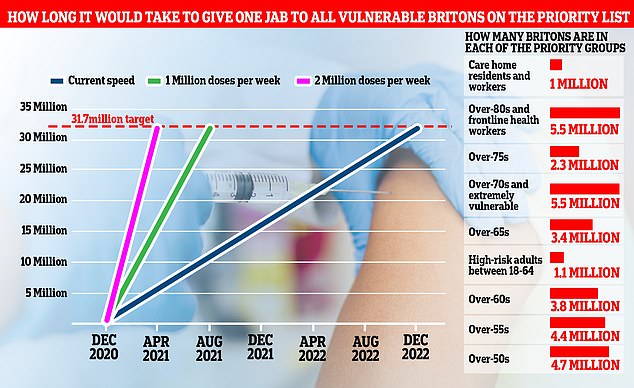 The UK’s vaccination programme has only managed to inoculate 1million people in the four weeks it has been operational.

But officials have promised the scheme will drastically speed up when clinics start using the game-changing Oxford University/AstraZeneca jab, which was rolled-out for the first time today.

Vaccines may not work against mutated South African Covid variant

Coronavirus vaccines could be ineffective against the highly-infectious South African mutation, a scientist who helped develop the Oxford jab has warned.

Sir John Bell, regius professor of medicine at Oxford University, said the African strain is more concerning than the Kent one.

Vaccines are believed to be effective against the highly-infectious UK variant VUI-202012/01 currently causing a massive spike in cases across the country.

But he said the South African variant 501.V2 – detected in two locations in Britain – has ‘really pretty substantial changes in the structure of the protein’ meaning vaccines could fail to work.

The Covid vaccine protects against the disease by teaching the immune system how to fight off the pathogen.

It creates antibodies – disease-fighting proteins made and stored to fight off invaders in the future by latching onto their spike proteins.

But if they are unable to recognise proteins because they have mutated, it means the body may struggle to attack a virus the second time and lead to a second infection.

However, experts told MailOnline today there was no publicly-available data to suggest the strain possesses the ability to escape the current iteration of jabs, even though it is more transmissible.

Professor Ian Jones, a virologist at the University of Reading, claimed he was ‘almost certain’ the vaccines will still be effective at some level.

He added that, in the unlikely event any new strain does makes vaccines redundant, it would take ‘a few days or less’ to tweak the jabs to target them.

The South African variant emerged in Nelson Mandela Bay in the Eastern Cape, which was the first major urban area to be hit by the country’s second wave.

It was discovered in mid-December and caused Covid cases to soar from fewer than 3,000 a day at the start of the month to more than 9,500 per day by Christmas, accounting for up to 90 percent of those new infections.

Professor Paul Hunter, an infectious disease expert at the University of East Anglia, told MailOnline he would be ‘very surprised’ if ministers hadn’t eased some curbs by April, when millions will hopefully have been vaccinated.

He added: ‘I can see us having some sort of restrictions even this time next year.’

Professor Hunter said curbs would likely be a lot less severe and may depend on how many of the most vulnerable residents come forward for a vaccine. If uptake is high, the virus has less room to spread and cause severe illness.

However, he said the only safe way to drop all restrictions would be to achieve herd immunity – when enough of a population becomes immune that the virus fizzles out.

Scientists believe this can only achieved when 70 per cent of people are protected and the US’ top coronavirus doctor Anthony Fauci has warned the figure could even be as high as 90 per cent.

Government scientists have set the goal of 2million vaccinations per week because that will mean the most vulnerable third of the UK population will have some protection by Easter and can get their full two doses before autumn, before winter pressures will start affecting the NHS again.

At a pace of just 1million a week, it would take Britain 30 weeks to vaccinate all the vulnerable residents in phase one of the inoculation drive. It means that they would not all get their second dose until next February and the health service could be faced with another winter crisis.

But Number 10 will not necessarily wait for the full cohort to be vaccinated before easing the cycle of restrictions.

Health Secretary Matt Hancock last month said that measures can be eased ‘when enough people who are vulnerable to Covid have been vaccinated then’. However, he never committed to an actual figure.

Experts say the number of vaccines Britain gives out before lockdown rules can start to be loosened will depend on the ‘risk appetite’ of Downing St and how well the jabs work in real life.

If measures are lifted too soon, then there could be a surge in severe cases, hospital admissions and deaths in groups at moderate risk but not priority for a vaccine, such as the middle-aged.

The NHS says that people over 70 and those with the most serious long-term health conditions are at ‘high risk’ from Covid.

These, combined with health and social care workers, make up a group of 14.3million people, who could be given a single dose each within seven weeks at the ambitious rate of 2million per week, so by mid-February.

But lifting lockdown rules by then would involve putting younger groups, such as those in their 60s, 50s and 40s, at risk from a then-uncontrollable virus.

And it would mean the people already vaccinated wouldn’t have the full protection of two doses, which both vaccines require.

This is why experts believe it is more likely that the UK’s restrictions will be phased out over a longer period to stop the virus spiralling among younger people, who still have a small risk of hospitalisation, death or long-term complications.

Dr Simon Clarke, a microbiologist at the University of Reading, told MailOnline last week: ‘It’s all very well vaccinating everybody over 65 and other people with long term health conditions, but the average of admission to intensive care is 60 and there are more men in their 40s in ICU with Covid than there are over-85s.’