Have retail investors finally run out of luck after a fantastic time in recent years? For much of 2022, savers have watched nervously as ominous clouds gathered on the economic horizon.

From high inflation to Ukraine, and now the return of economy-crushing lockdowns in China, it’s made for a bleak picture. As recession fears take hold on both sides of the Atlantic, world markets are heading south, with the MSCI World Index falling 3.5 per cent last week.

It came as the U.S. Federal Reserve announced its largest rate rise in two decades, as central bankers struggle to tame runaway inflation.

Slump: As recession fears take hold on both sides of the Atlantic, world markets are heading south, with the MSCI World Index falling 3.5% last week

In another calamitous day, the tech heavy Nasdaq fell 4.3 per cent on Monday, taking its losses this year to 26.59 per cent — more than the Covid crash.

Unsurprisingly, this market meltdown has rocked investor confidence. According to the Investment Association, retail investors withdrew £7.1 billion from investment funds in the first quarter of 2022.

These dramatic outflows suggest that DIY investors are spooked. But what do the experts think?

The economic slowdown has already taken its toll on several market giants. While its founder has been making headlines with his Twitter takeover, electric car maker Tesla has plunged 34 per cent since early April.

Meanwhile, Amazon became the latest U.S. company to report slowing sales, wiping more than $200 billion off its valuation in 24 hours.

It was a rude awakening for a company that has long been considered a must-have share, and a staple of retail funds, says Sophie Lund-Yates, an analyst with investment service Hargreaves Lansdown.

‘Even with $116 billion of quarterly sales, Amazon is suffering badly at the hands of economies of scale,’ she says. ‘The online retailer had to double its capacity to meet demand when the pandemic hit, and revenues aren’t keeping pace.’

Its share price is down 36.16 per cent this year. It comes just weeks after Netflix and Meta (Facebook) reported similarly poor sales. The tech staples are down 71.02 per cent and 42.04 per cent since the beginning of the year.

As Jason Hollands from Tilney Bestinvest points out, Wall Street’s Nasdaq composite index (a popular measure of tech stocks) has fallen 26.59 per cent in the same period. 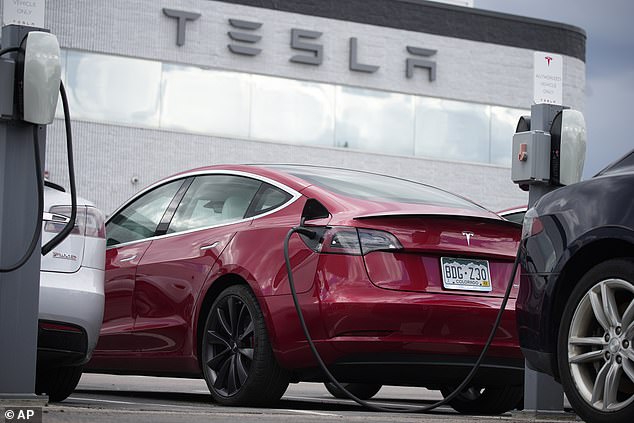 Losing charge: As Tesla founder Elon Musk has been making headlines with his Twitter takeover, the electric car maker has plunged 34% since early April

How most investors are likely to be hit

The tech correction — which has entered ‘bear market’ territory — will have almost certainly made an impact on retail portfolios.

The last time this happened was in 2018, when a combination of Trump’s trade wars and the threat of a political clampdown on big tech saw U.S. markets slump by 15 per cent in six months.

The sheer size of Apple, Amazon and Microsoft means they make up a large chunk of passive funds that track the U.S. market.

These large growth stocks have also been popular picks for active stock-pickers, who have used them to delight retail investors.

After thriving throughout the pandemic, the trust has now fallen 38.80 per cent this year.

Its share price has been dragged down by a slowdown for its biggest holding, including vaccine maker Moderna (down 42.23 per cent) and Tesla.

But the ripples from the juddering world economy have been felt beyond Silicon Valley.

The MSCI World Index, a common measure of overall stock markets and a barometer of the world economy, is now down 17.5 per cent this year.

In China and Hong Kong, the return of Covid has dragged the CSI 300 and Hang Seng Index down 20.29 per cent and 15.64 per cent. Closer to home, the cost of living crunch has contributed to the UK’s FTSE 250 falling 18.39 per cent since January.

It comes as the Bank of England predicts that inflation will hit 10 per cent, with the potential for the UK to slip into recession. And there are signs that the gigantic U.S. economy may be heading for the same fate. 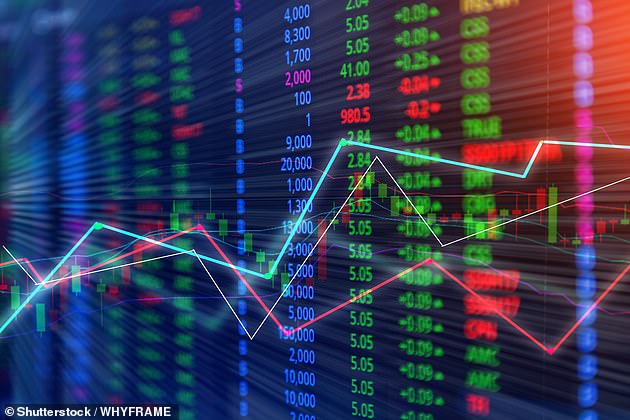 Global fears: According to the Investment Association, retail investors withdrew £7.1 bn from investment funds in the first quarter of 2022

Should you worry about recession?

Investors have been particularly rattled by the return of one particular warning light with a track record for predicting recessions.

Known as the yield curve, it concerns the rate of interest that big investors expect in order to purchase U.S. government debt.

When the curve inverts — as it did last month — it suggests that capital markets anticipate strong risk on the short-term horizon.

‘The curve has inverted ahead of every recession in the U.S. over the past 50 years, with only one false positive,’ says Neil Shearing, group chief economist with Capital Economics. But he suggests investors shouldn’t be so quick to assume the worst. At least, not yet.

He points out that household balance sheets remain strong in the U.S., suggesting consumer spending can weather the storm. ‘If recession does materialise, it is more likely to do so in Europe than in the U.S.,’ he says.

‘Europe is a larger net importer of commodities, making it more exposed to the surge in prices — which then squeezes household incomes.’

If the picture wasn’t depressing enough, investment experts say it’s impossible to predict when the gloom will end.

‘While many economists believe inflation has either peaked or will do so soon, it could well linger at high levels for some time yet,’ says Jason Hollands.

The big question, he adds, is whether markets have correctly predicted the scale of monetary tightening, or whether banks will have to go even further.

Investors are unlikely to see any substantive recovery until there are indications that central banks are finally bringing inflation under control.

‘The easy money has been made, and we are now at an inflection point for investment strategies,’ says Graham Harrison, managing director at investment consultants ARC. ‘The next decade will be significantly different for investors than it has been during the past three.’ 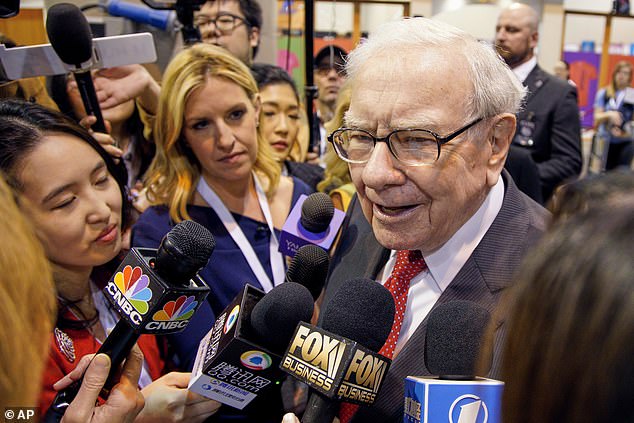 Time to buy and be greedy when others are fearful?

With markets, nothing is certain — and there are signs that some investors are more optimistic. Last month we heard mega-billionaire investor Warren Buffett had been on a spending spree, buying up shares he considers undervalued.

His company holds a $160 billion stake in Apple, as well as large holdings in American Express, Chevron and video game maker Activision.

‘If you are selective about the companies you choose to invest in, the valuations have hardly ever looked better,’ says Stephen Yiu, manager of the Blue Whale Growth Fund.

Be careful of assuming that all prices always have to go back up.

The past six months has seen an implosion of many pandemic winners, including exercise firm Peloton and video conference leader Zoom. Whether you’re an inflation pessimist or bullish like Buffett, be wary of rushing to make decisions.

How to find funds that offer some protection

Investment experts always caution against over-reacting to short-term noise, as it often causes pain. In turbulent times, share prices often move up and down from one week to the next, so investors who sell risk missing those gains.

Conduct a careful review of your portfolio to check it’s well balanced.

If you’ve suffered losses that outweigh the general market mood — i.e. more than 25 per cent — it could be a sign it lacks diversity.

Many investors may have ended up overexposed to tech. Holding more than 3 per cent of your portfolio in any one company is generally discouraged, although the size of giants such as Apple and Microsoft allows some leeway.

Turbulent times are a reminder of the need to have some money in more defensive assets, such as precious metals, bonds and currencies. They tend to hold up in times of inflation. Gold is up 2 per cent this year.

‘All investing involves taking on a degree of risk, and investors need to work out how much they are comfortable taking on to reach their goals,’ says Vanguard’s James Norton.

‘There is always uncertainty in markets. We recommend investors build highly diversified global portfolios to reduce this risk to ensure the best chance of success.’

Vanguard’s LifeStrategy range provides a pre-diversified portfolio according to an investor’s particular risk level — with a divide between equities and defensive assets.

Investors with active funds might consider having a percentage in a specialist defensive fund. The Ruffer Investment Company, which invests in index-linked bonds, commodities and gold, is a popular option.

Over five years, the fund has turned a £10,000 investment into £13,500. It has also performed strongly in the period in which markets have dipped: with a 4.8 per cent return this year.

Patience might not provide instant comfort for investors, but it has a habit of paying off in the long run.

Has the Bitcoin bubble burst?

As world stock-markets have faltered, one asset class has done even worse — cryptocurrencies. ‘Bitcoin has fallen more than 50 per cent since November, taking its value to an 18-month low,’ says Victoria Scholar from Interactive Investor.

The crypto crash will bring heavy losses for the more than 2 million Britons who own cryptocurrencies.

Those that hold alt-coins — such as Solana, Cardano and Dogecoin — will have fared even worse, with 70-80 per cent losses, leaving just a fraction of the initial investment. 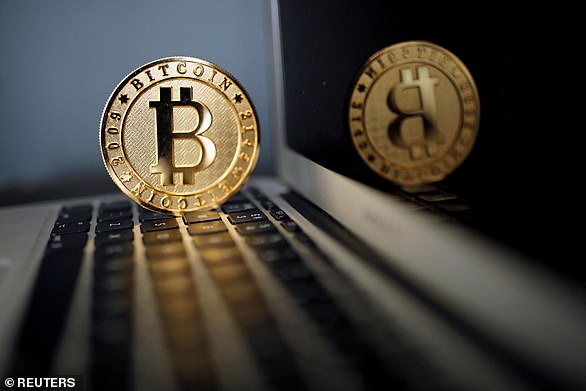 18 month low: Cryptocurrencies have fallen even faster and steeper than mainstream assets – with Bitcoin losing 17% this month alone

The Bank of England has long warned that crypto investors risk losing their money, but it has done little to deter buyers.

A 2021 survey by investment platform AJ Bell found that UK savers were more likely to have bought Bitcoin than opened a stocks and shares ISA.

Much of Bitcoin’s initial appeal came from its reputation as ‘digital gold’ that would hold its value if excessive money-printing triggered inflation.

Yet as the world economy faces the biggest inflationary test for decades, Bitcoin is well and truly failing its own test.

While gold has held its value (rising 2 per cent this year), cryptocurrencies have fallen even faster and steeper than mainstream assets — with Bitcoin losing 17 per cent this month alone. 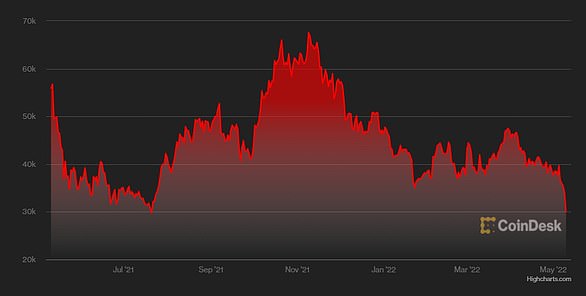 It suggests cryptocurrencies were held up by cheap money and market optimism — making them the ultimate bubble.

Bitcoin fans will of course point out that the digital asset has plummeted before, only to rise from the ashes — like in the crypto crash in February 2020, when Bitcoin fell 40 per cent before going on to gain 500 pc in a year.

Judging by the money in the market, though, this crypto crash stands to be the most brutal yet.

Any recovery would depend on even more willing investors happy to pump in extra money — and there are likely to be fewer of those around this time.