EXPRESS INFORMER > News & Politics > How fraudsters are operating ‘with impunity’

Fraudsters are operating ‘with impunity’ because police aren’t equipped to investigate them, a damning report concluded.

A rapidly increasing number of cases are regularly handed to ‘unskilled investigators’, a review stated, with police staff claiming they can no longer effectively bring criminals to justice.

The review, led by former Metropolitan Police deputy commissioner Sir Craig Mackey, claimed the police response to fraud, which should be seen as a ‘national threat’, needed ‘radical change’.

Deputy Commissioner Craig Mackey of the Metropolitan Police speaks to the media after observing a minute’s silence outside New Scotland Yard during a vigil to remember the victims of last week’s terror attack on March 29, 2017 in London, England

It found only one in 200 officers were dedicated to investigating fraud, despite the four million incidents in England and Wales each year making up more than a third of all crimes.

Action Fraud, the police’s national reporting service, failed to answer a third of calls and faced a ‘disturbing’ rate of staff turnover and absenteeism.

Last year, an investigation by the Times exposed handlers mocking victims as ‘morons’ and misleading them into thinking ditched cases would be investigated.

Even when calls are dealt with correctly, Sir Craig said ‘the capacity to investigate in police forces is at best stretched and sometimes non-existent’.

The Action Fraud service, which is overseen by City of London police, outsources its call centre and computer systems to private companies. 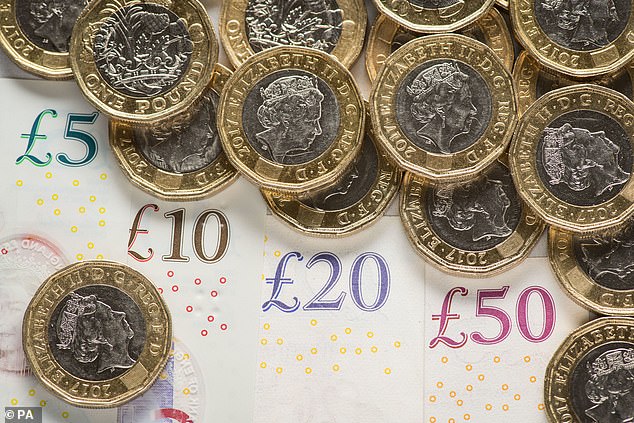 File photo dated 26/01/18 of money. The Action Fraud service, which is overseen by City of London police, outsources its call centre and computer systems to private companies

However, the systems that should collate reports with matching details are so poor that staff are forced to record them on makeshift spreadsheets.

Action Fraud takes an average of four minutes and 37 seconds to answer calls – over four minutes longer than a standard commercial call centre.

A third of calls are abandoned, compared with 14 per cent at commercial call centres.

The report also suggested there were ‘unacceptable delays’ to investigations as forces are making excuses not to take them on.

Last night the Home Office confirmed it was carefully assessing the findings, with hundreds of officers set to be recruited as part of a £60million policing overhaul.