EXPRESS INFORMER > Health & Medicine > How fat is YOUR US state? Map shows 40% of people in West Virginia and Kentucky are obese

More than four in 10 adults are obese in Kentucky and West Virginia as rates soared across the US, new official data shows.

Nineteen states now have obesity rates above 35 per cent — considered an alarming threshold by officials — which is double the number from just three years earlier.

The figures, released by the Centers for Disease Control and Prevention (CDC), prompted experts to describe the situation as an ‘urgent epidemic’.

Just one of the US’ 54 states and territories — Washington D.C. — has an obesity rate of lower than 25 per cent now, compared to three in 2018. The other two were Hawaii and Colorado.

CDC acting principal deputy director Debra Houry said the data ‘illustrates the urgent need for making obesity prevention and treatment accessible to all Americans in every state and every community’.

President Joe Biden last week announced his plan for the biggest crackdown on waistlines in 50 years, which includes mandatory nutrition labelling on the front of food products to highlight snacks too fatty, sugary or salty.

And the criteria for food-makers to market their products as ‘healthy’ will also become stricter under the new plans.

According to the National Institutes of Health, obesity is the second leading cause of preventable death in the US, behind cigarette smoking. Around 280,000 Americans die directly due to obesity every year.

The above map shows the prevalence of self-reported obesity by state across the US in 2021. It was highest in Kentucky and West Virginia, but lowest in Hawaii and Colorado. Washington D.C., which is not yet a state, had the lowest rate 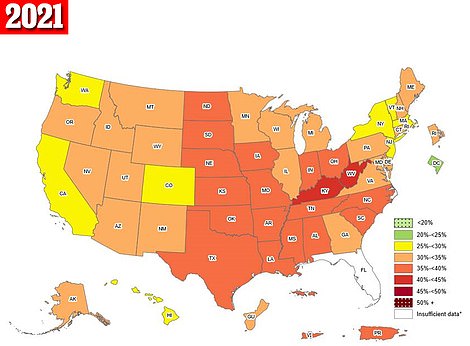 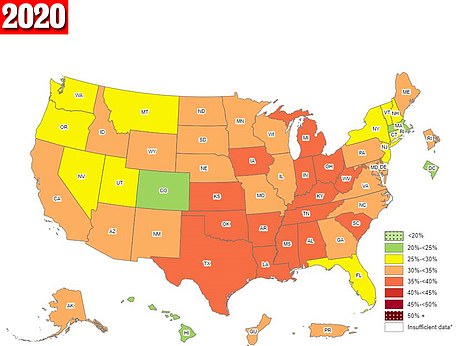 The above maps are the obesity rates across America for the years 2021 (left) and 2020 (right). It showed that Kentucky and West Virginia had the highest rates across the United States 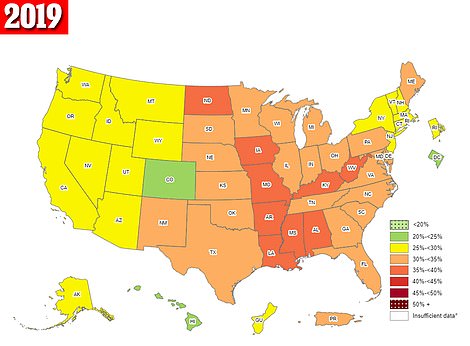 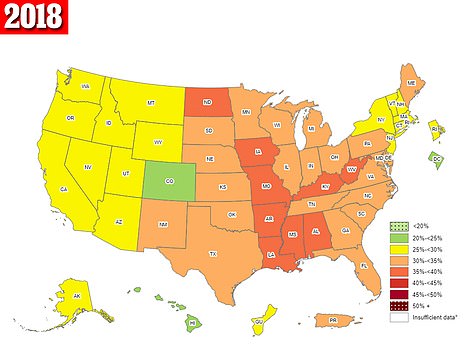 The above maps are for 2019 (left) and 2018 (right). It shows obesity prevalence in the US during these two years 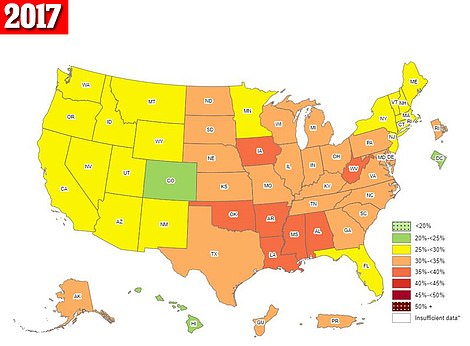 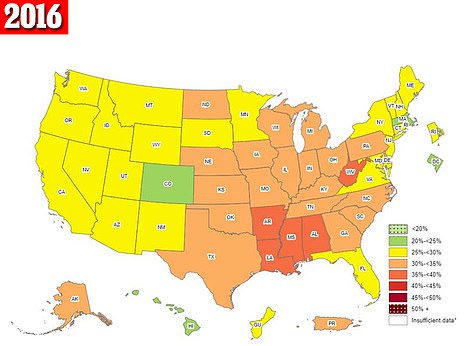 The above maps are self-reported obesity rates in 2017 (left) and 2016 (right). They show that by 2017, Oklahoma and Iowa saw their rates join the top teir 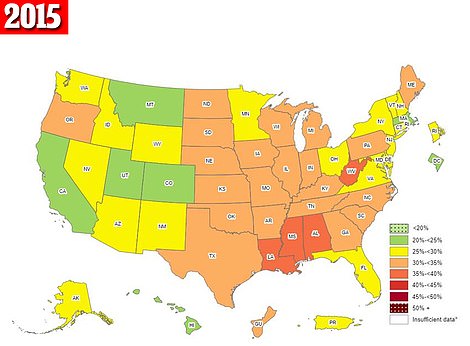 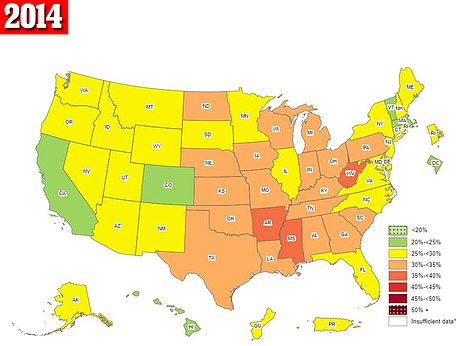 The above shows the obesity rates by state for 2015 (left) and 2014 (right). Alabama and Louisiana saw their rates rise to the highest categories over this period 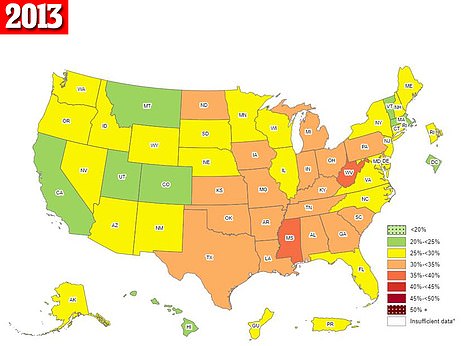 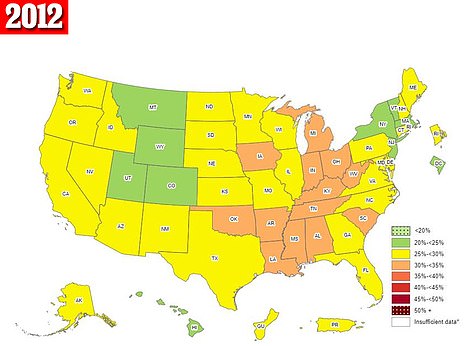 The above maps are for the years 2013 (left) and 2012 (right). They show that over this period Mississippi and West Virginia both saw their obesity rates rise to being the highest in the country 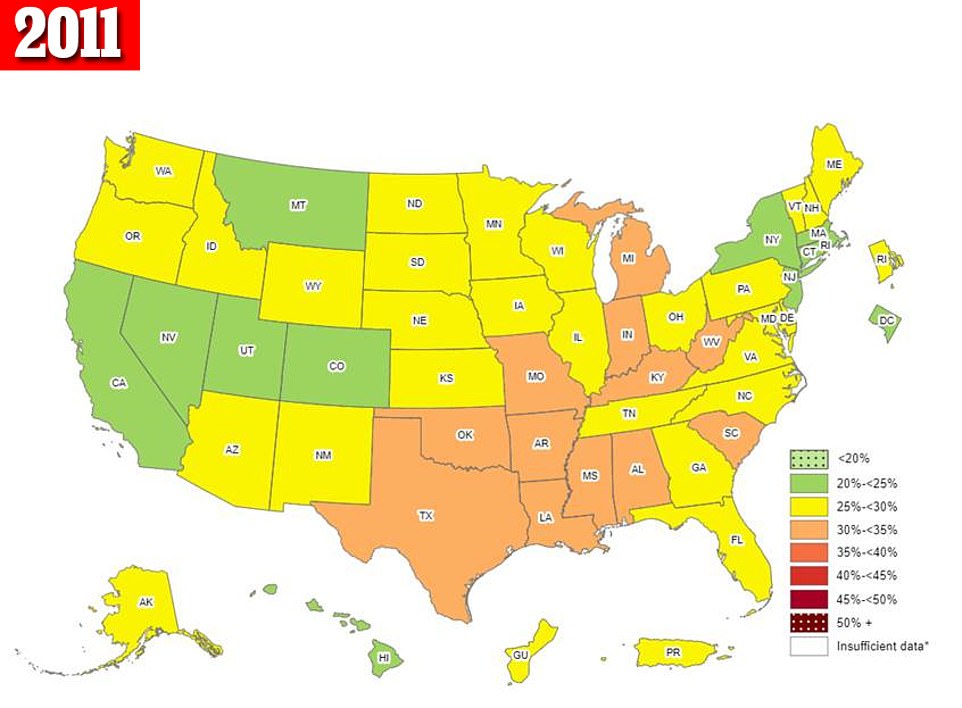 The above map shows the obesity rates by state for the year 2011. It reveals that 10 states had rates below 20 per cent during this period. By 2021, this had dropped to only one area (Washington DC) and no states

Leading the pack was West Virginia, one of the nation’s poorest states, with an obesity rate of 40.6 per cent. It was followed by neighbouring Kentucky (40.3 per cent), and Alabama (39.9 per cent).

Black Americans are most likely to be obese, followed by Hispanic and then white people, according to the latest data.

Men are more likely to be obese than women, and so are less educated people.

The relationship between obesity and money is complex, as people in the middle tier of income are more likely to be obese than the highest and lowest earners.

The CDC figures are based on self-reported height and weight data from the behavioral risk factor surveillance system. There was insufficient data to determine a rate for Florida, the CDC said. 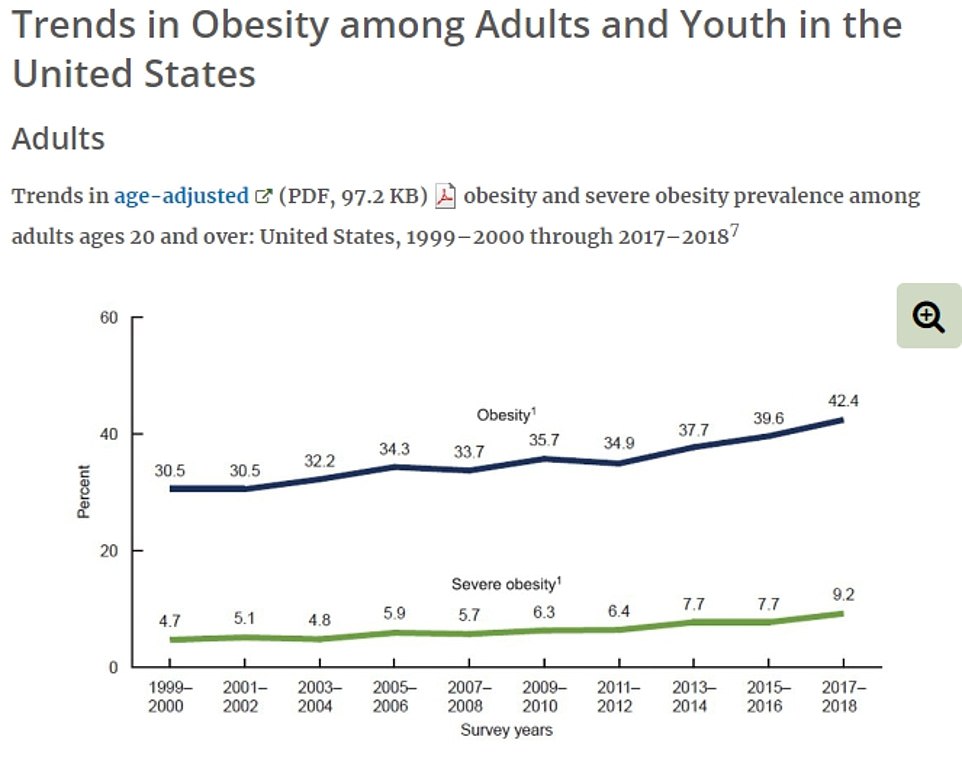 The above graph shows obesity trends among US adults over time, revealing that rates of obesity and gradual obesity are both now beginning to trend upwards

The above graph shows the rates of diabetes as a proportion of the population, a key risk factor for those with diabetes. It shows diagnosed diabetes cases have climbed since the early 2000s along with obesity 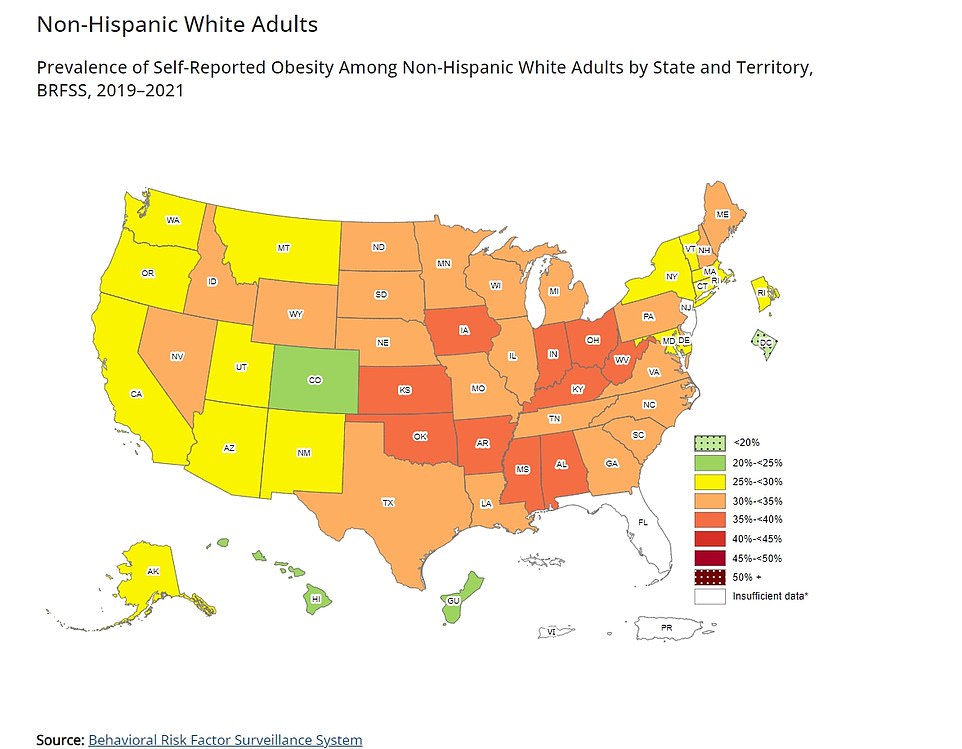 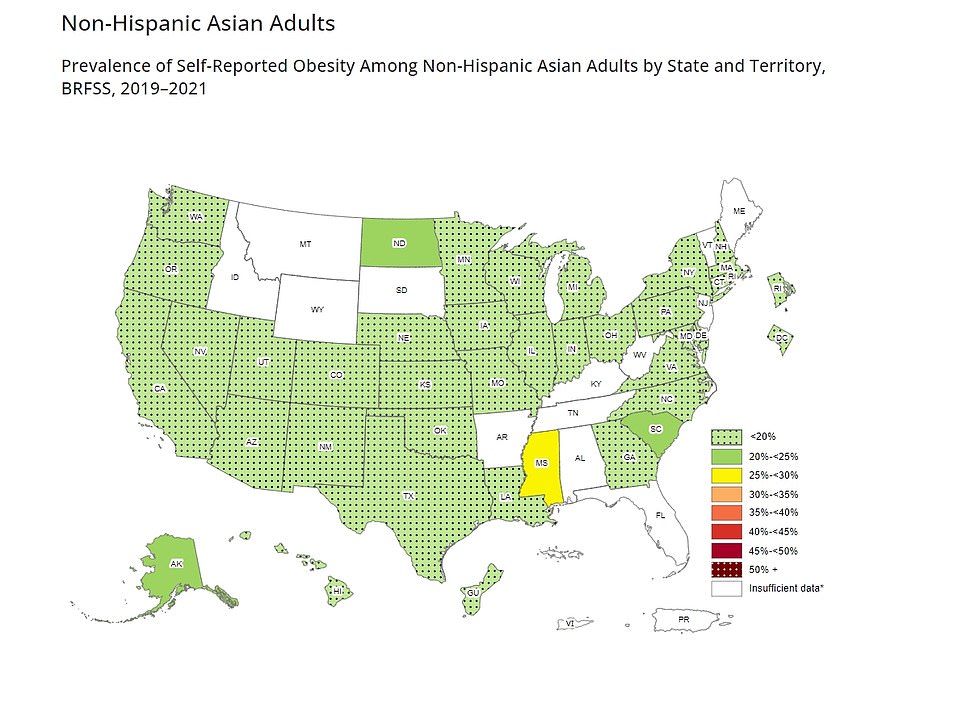 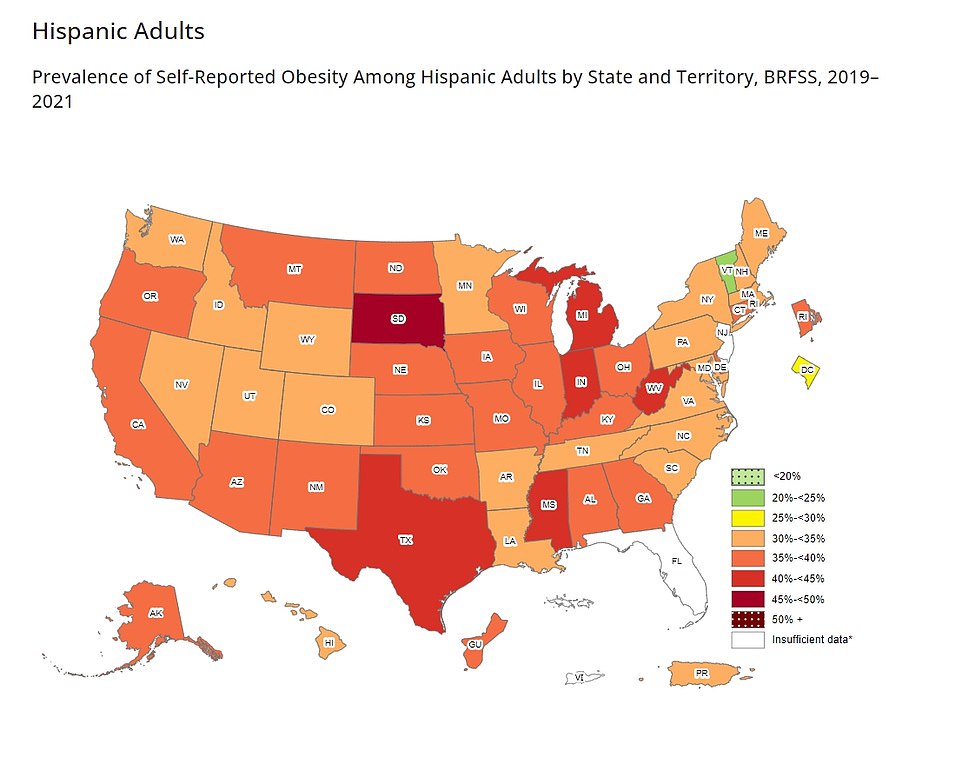 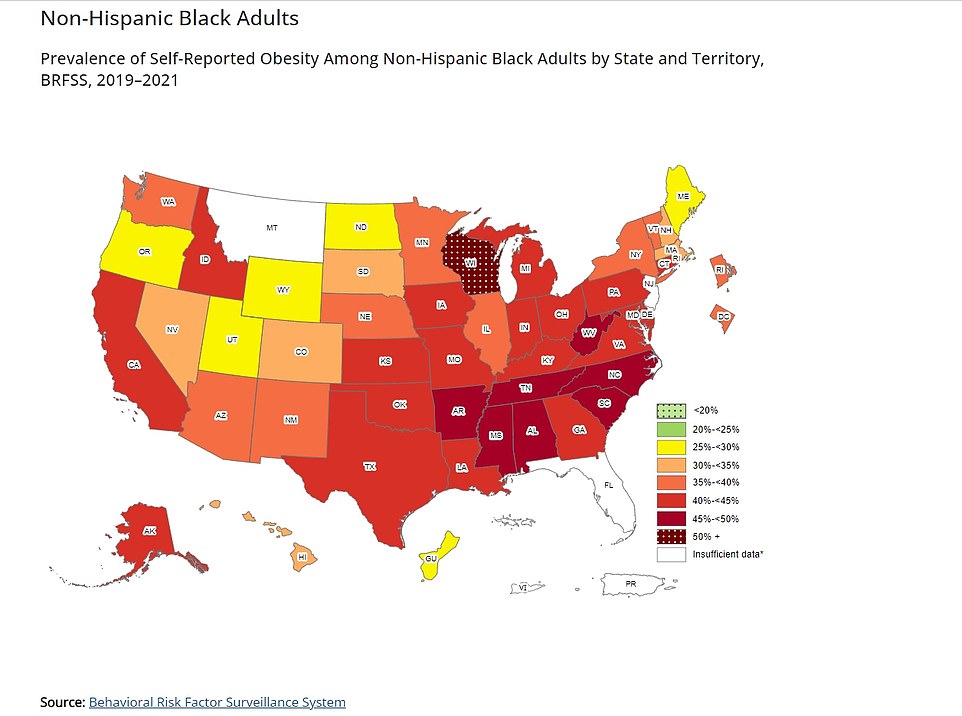 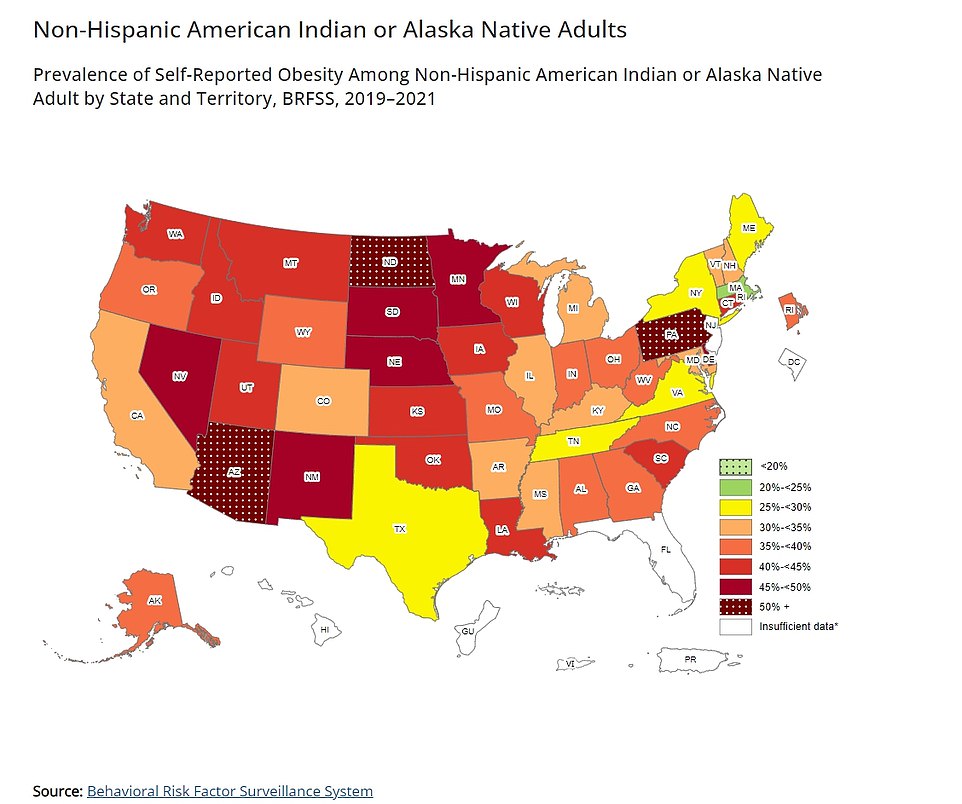 But the Florida Department of Health reports 36 per cent of the state’s adults are medically too fat, which means it would join the nineteen states with high obesity rates.

Obesity is defined as an adult having a BMI of 30 or over.

A healthy person’s BMI – calculated by dividing weight in kg by height in meters, and the answer by the height again – is between 18.5 and 24.9.

The condition costs the US healthcare system around $173billion a year, due to obesity increasing a person’s risk of a number of life-threatening conditions.

Such conditions include type 2 diabetes, which can cause kidney disease, blindness and even limb amputations.

Obesity also raises the risk of heart disease, which kills 647,000 people every year in the US – making it the number one cause of death.

This includes breast, which affects one in eight women at some point in their lives.

People with obesity also describe being stigmatized due to their weight.

Among children, research suggests that 70 per cent of obese youngsters have high blood pressure or raised cholesterol, which puts them at risk of heart disease.

Obese children are also significantly more likely to become obese adults. And if children are overweight, their obesity in adulthood is often more severe.

As many as one in five children start school in the US being overweight or obese.

Obesity should be considered a brain disorder like autism or ADHD, doctors claim

Obesity should be classed as a brain development disorder, doctors say.

That would put it in the same class as autism, attention deficit hyperactivity disorder (ADHD) and Asperger’s.

They have made the recommendation after a study indicated obesity was partly caused by changes in the brain during childhood.

Obesity is currently regarded as a behavioral disease — a pattern of destructive choices people make that damages their health.

But Dr Harry MacKay, from Baylor College of Medicine in Texas, said rethinking this could be ‘the key to stopping the worldwide obesity epidemic’.

The new study in mice looked at epigenetics, the system of brain development determining which genes will and will not be used in different cell types.

The Texas researchers found that one part of the brain, called the arcuate nucleus, undergoes a lot of epigenetic changes in very early childhood.

During this time, brains are also particularly sensitive to programming which will later determine how well body weight can be regulated.

This means people could pile on the pounds later on in life if changes to the arcuate nucleus go wrong during childhood, the researchers said.

When the researchers compared the areas in the brain where the changes occur in mice and humans, they were surprised to find that the location in rodents overlapped with the part in people associated with obesity.

The researchers also discovered that these changes occur earlier in females than males.

Writing in the study, Dr MacKay said: ‘We believe public health interventions to curb the worldwide obesity epidemic would benefit by considering obesity as a neurodevelopmental disorder.’

The experts have called for further research into the role of epigenetics and development of obesity.

It is hoped this could open the door for new ways to screen and treat the disease.

The findings were published in the journal Science Advance.