As the UK beds in for a tough new lockdown that could last months until enough people are vaccinated against Covid-19, some of its European neighbours are taking similarly strict measures while others have their eye on relaxing the current rules.

Germany has extended a national lockdown today in order to drive the infection rate down, while Denmark could face harsher rules because of fears over the UK variant of the disease.

But France sent all 12million of its schoolchildren back to the classroom on Monday, while Spain is not in lockdown and Italy is planning to ease restrictions on Thursday.

It comes amid concern in several European countries about the slow pace of the vaccine rollout which offers the best hope of bringing the misery to an end.

France has vowed to ramp up its vaccine delivery ‘on an exponential curve’, while other countries are weighing up whether to follow Britain’s model and use up its stock of vaccines to give one dose to as many people as possible.

Britain currently has by far the highest infection rate in Western Europe, followed by the Republic of Ireland, and then Sweden which is still holding out against lockdowns.

While Britain beds down for a lengthy lockdown and Germany extends its own restrictions, other countries including Italy are looking to ease their toughest measures and Sweden is still holding out against a full lockdown 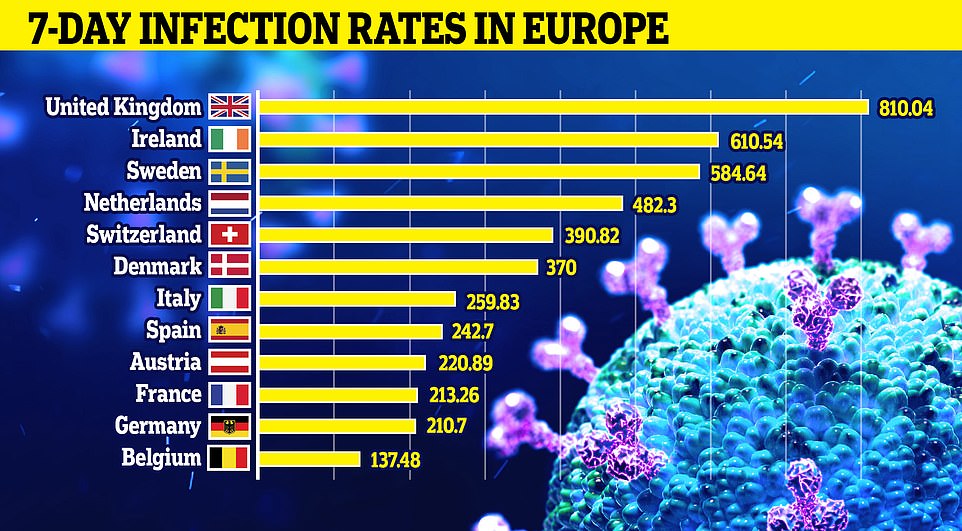 Britain’s infection rate is currently by far the highest in Europe, following rapid growth blamed by Boris Johnson on the new strain of the virus which is feared to be far more infectious than the old variant

Angela Merkel and the leaders of Germany’s 16 states agreed today to extend the ‘hard lockdown’ that has been in place since December 16 until the end of January and introduce tougher restrictions.

Shops, bars, restaurants and schools will remain closed until at least the end of the month.

For the first time, the rules will restrict non-essential travel for residents of hard-hit areas across the country.

Movement is limited to a 15-kilometre (nine-mile) radius in towns and districts where the number of new coronavirus cases is above 200 per 100,000 residents over a seven-day period.

The rules also include the strictest limit on gatherings since the first lockdown in the spring, with members of any one household being allowed to meet only one other person.

Germany’s infection rate has dropped in the last two weeks but officials say it is too early to tell whether this is a genuine improvement or a mirage caused by limited data over the Christmas period.

‘We need to reduce contacts further because we have seen that we have not been able to lower the incidence (of coronavirus) in the last (few) weeks as far as we would have wished for,’ Merkel told journalists on Tuesday after a meeting with the leaders of Germany’s 16 federal states. The measures will be reviewed on January 25. 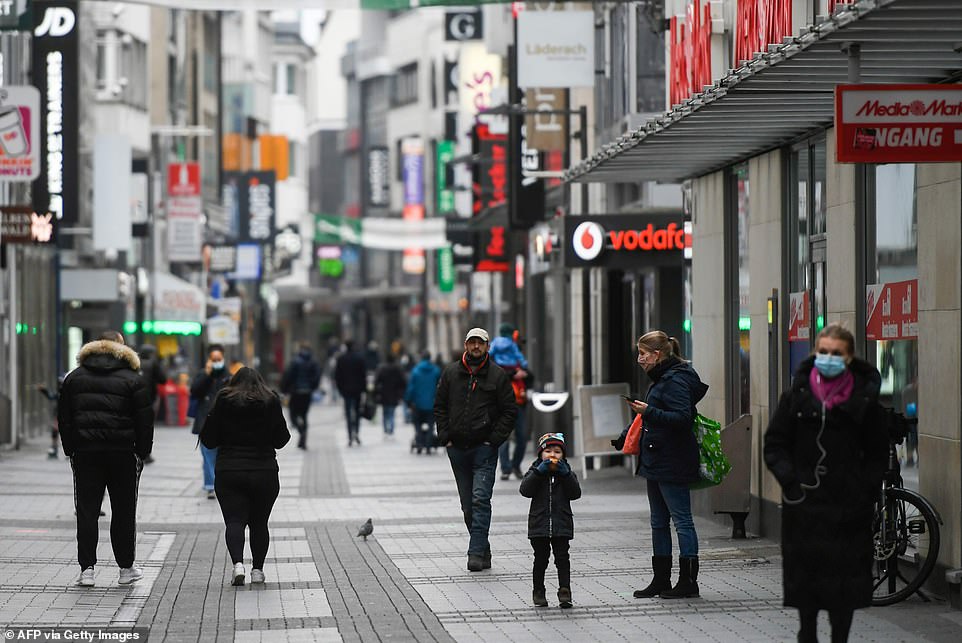 GERMANY: People walk on a pedestrian street in Cologne on Monday, a day before the country extended its ‘hard lockdown’ in order to drive down its infection rate

Stay-at-home orders imposed across Italy over Christmas and New Year are set to expire on Thursday, with the country returning to a three-tier system.

While different measures can be applied in different regions, the government has ordered all bars and restaurants to remain closed this weekend.

Meanwhile, the planned re-opening of schools at 50 per cent capacity on Thursday has been postponed until Monday.

Some regional governments, including in the Veneto region which includes Venice, have decided to push the re-opening back until January 31. The government has also extended travel restrictions between Italy’s 20 regions, with movement only permitted for certain reasons.

Italy’s infection and death rates are down from their November and December peaks, but an average of 473 people are still dying every day.

A national 8pm curfew has been brought forward to 6pm in some parts of France, including the Les Alpes-Maritimes department which includes Nice. Paris has, for now, been spared the additional restriction.

The government has also confirmed that theatres, cinemas and concert halls would remain closed beyond the current deadline of January 7.

Similarly, government minister Alain Griset said on Sunday that it was unlikely that restaurants would re-open as initially planned on January 20.

However, France has bucked the trend by sending all its children back to school this week, with 12million pupils returning on Monday.

France has also promised an ‘exponential’ acceleration in its vaccine drive after criticism over the slow pace of the rollout.

Spain is not in a national lockdown, but some regions have imposed new measures after cases started rising again in mid-December.

After Spain’s infection rate fell in early December to its lowest level since the summer, it has since ticked up again and is now back above 10,000 a day.

Catalonia announced new restrictions on Monday, banning people from leaving their municipality until at least January 17 and closing non-essential shops at weekends.

The new measures also include the closure of gyms and shopping malls – but bars and restaurants can still have customers in for breakfast and lunch.

Other regions such as Andalusia, Murcia and Extremadura have also announced new measures in recent days, with Madrid locking down some districts. 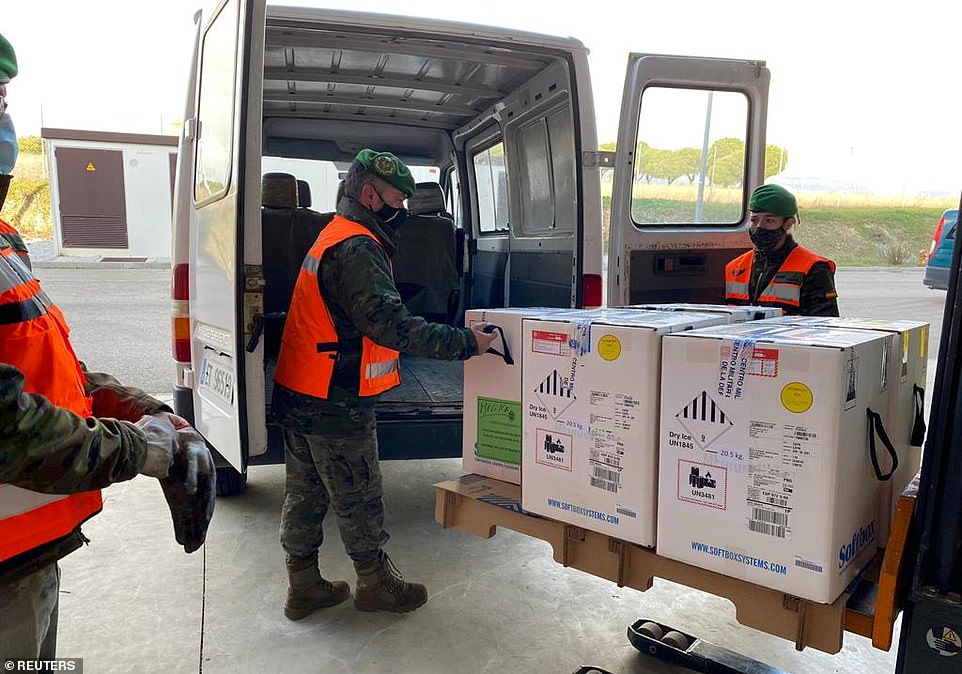 SPAIN: Military personnel carry boxes of the Pfizer/BioNTech vaccine after arriving at a warehouse in Colmenar Viejo – with the Spanish government deciding not to follow Britain’s lead by changing the two-dose rollout plan

SWEDEN: STILL NO LOCKDOWN BUT MASKS COME IN

After earning both admiration and notoriety for holding out against lockdown, Sweden is continuing to keep shops open and resist stay-at-home measures.

But public gatherings have been limited to eight people, and people are advised to choose only one or two friends to socialise with.

In addition, Sweden is now recommending masks on public transport for the first time after months of playing down their effectiveness.

Sweden has published little data over Christmas and New Year, but thousands of people are still being infected and dozens dying every day.

The death toll of 8,727 is a far higher rate than that in other Nordic countries, but lower than in Britain, Spain, France and Italy which have all imposed lockdowns.

Denmark last month brought in a series of restrictions due to last until January 17, including the closure of shops, restaurants.

Schools are also remaining shut in that time – marking a shutdown almost as long as last spring, when Denmark was the first country in Europe to re-open schools.

Ministers have voiced concern about the new British strain of the virus, with reports saying that this could lead to a further tightening of restrictions in Denmark.

Denmark has a relatively low death rate from Covid-19, with only 1,389 since the start of the pandemic, but the toll has reached new highs in recent weeks.

PM Mette Frederiksen said last week that ‘the situation regarding infection rates, hospitalizations and deaths is now even more serious than in the spring’.

Austria’s third national lockdown was effectively extended until January 24 on Monday after a plan to allow some people out earlier was dropped.

The government had proposed that those who tested negative in a mass-testing programme be allowed to visit shops, restaurants, cafes and bars from January 18.

But the plan would have obliged those who did not participate to stay at home for a week longer, and the proposal has now been scrapped after public opposition.

The country’s infection rate climbed to among the highest in the world in late November, with outbreaks in elderly care facilities emerging as a particular issue.

The Irish government is set to tighten lockdown restrictions including the closure of schools as rampant rates of Covid infections threaten to overwhelm the health service.

On Wednesday, the cabinet will meet to decide whether to keep schools closed until February as part of a string of measures to control the third wave which has been described as ‘extremely worrying and dangerous’.

Schools were originally scheduled to reopen next Monday but government sources say it is highly likely they will remain closed for the rest of this month.

Chief medical officer Dr Tony Holohan has warned there will be a sharp increase of deaths this month.

The government introduced a second nationwide lockdown in October which succeeded in reducing Covid rates to the lowest among EU states when the restrictions were lifted in the first week of December.