EXPRESS INFORMER > Health & Medicine > How do you do CPR? The ultimate, expert-devised guide to save a dying stranger’s life

Everyone knows to call 999 if someone is unconscious and not breathing properly, yet exactly how to perform a life-saving skill before ambulance crews arrive remains a mystery to millions.

Cardiac arrest — when the heart suddenly stops pumping blood around the body — is the most extreme medical emergency. Victims can die within minutes without any treatment.

But CPR — when someone gives chest compressions to a person in cardiac arrest — can keep sufferers alive until paramedics arrive.

Former TOWIE star Mark Wright yesterday revealed how he rushed to perform CPR on a stranger during a holiday in Tenerife but was too late to keep him alive. 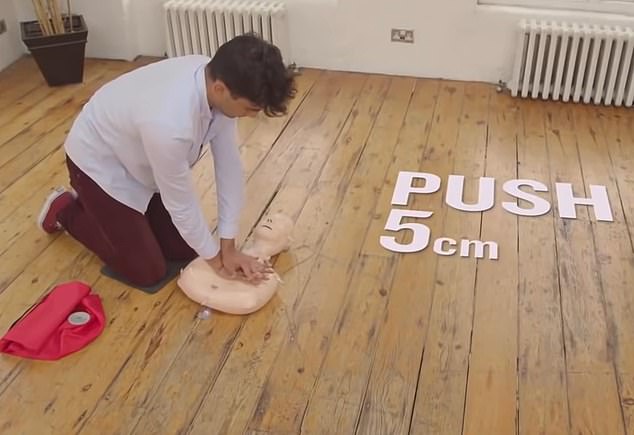 To start chest compressions, knell next to the victim and place the heel of one hand on the centre of their chest. Place the other hand on top of the first and interlock your fingers. Keep your arms straight and use the heel of the hand to push down firmly between the breastbone — around 5 to 6cm — and release. Do this at a rate of 100 to 120 chest compressions per minute — around two per second

Cardiac arrest happens when there is an electrical problem in the heart, interrupting a normal heartbeat.

This stops blood from moving around the body, meaning the brain and other vital organs are deprived of oxygen.

Victims fall unconscious and stop breathing as a result.

It is different to a heart attack, which occurs when one of the coronary arteries become blocked — cutting off the heart’s blood supply. A heart attack can lead to cardiac arrest, however.

Passers-by should call 999 immediately if someone is unresponsive.

Sufferers only have minutes to live — meaning emergency care is required straight away, before ambulance crews arrive.

CPR — known medically as cardiopulmonary resuscitation — should be performed when a person is unconscious and not breathing, or not breathing properly, even if their heart is still beating.

This is called respiratory arrest and will quickly become cardiac arrest without CPR.

If a person is unconscious but breathing normally, they should be put in the recovery position.

How to give CPR to babies and children

The method for performing life-saving CPR on babies and children is different from that for adults.

How to perform CPR on babies under the age of one

1. Turn the child on their back, open their mouth and tilt their head back

2. Seal their mouth and nose with your mouth and breathe out firmly until their chest rises. Give five of these rescue breaths.

3. Put two fingers in the centre of the child’s chest and push down by around 4cm. Repeat 30 times, allowing the chest to come back up before pushing down again.

4. After 30 compressions, give two rescue breaths. Repeat until emergency help arrives, or the child shows signs of consciousness, such as breathing, moving or opening their eyes.

How to perform CPR on a child aged one to 18

1. Turn the child on their back, open their mouth and tilt their head back

2. Pinch their nose, seal their mouth with yours and breathe out firmly until their chest rises. Give five of these rescue breaths.

3. Put one hand in the centre of the child’s chest and push down by around one third. Repeat 30 times, allowing the chest to come back up before pushing down again.

4. After 30 compressions, give two rescue breaths. Repeat until emergency help arrives, or the child shows signs of consciousness, such as breathing, moving or opening their eyes.

If an adult appears unconscious, gently shake their shoulders and loudly ask if they are okay.

Call 999 yourself if no one is around. Call handlers will give instructions on how to perform CPR.

Kneel next to the victim and place the heel of one hand on the centre of their chest. Place the other hand on top of the first and interlock your fingers.

Keep your arms straight and use the heel of the hand to push down firmly between the breastbone — around 5 to 6cm — and release.

Do this at a rate of 100 to 120 chest compressions per minute — around two per second.

Songs including Stayin’ Alive by the Bee Gees, Eye of the Tiger by Survivor and Wannabe by the Spice Girls all have 100 to 120 beats per minute, so medics recommend thinking of these songs while performing CPR.

Keep performing chest compressions until 999 crews arrive on the scene and take over, or the person starts to regain consciousness — by coughing, opening their eyes, speaking or breathing normally.

If someone is nearby, it can be performed in turns.

If a defibrillator is found, turn it on and follow its instructions.

The machine will detect whether a shock is needed. Some of the gadgets will shock without prompt, while others will advise if a shock needs to be pushed to deliver the shock.

While delivering chest compressions, give rescue breaths if you’re comfortable to do so.

To give rescue breaths, tilt the person’s head back gently and lift their chin up with two fingers.

Pinch their nose. Seal your mouth over theirs and blow hard for one second. Do this twice.

Then pump the chest for 30 counts before giving another two rescue breaths.

Mark Wright, 35, this week told of how he performed CPR on a man staying at the same hotel as him during a holiday in Tenerife.

He explained that during his trip with wife Michelle Keegan, 35, a woman approached him ‘in a tizz’ about her husband who had collapsed.

Getting emotional as he recalled the incident Mark, who had recently learnt CPR, said: ‘I did what I could – he was there for a while before I got there.

‘He wasn’t necessarily alive when I gave him CPR but it allowed the ambulance to put him on a life support machine.

‘He wasn’t pronounced dead while he was in my hands.’

In this situation the man passed away, but it bought the family some time, Mark added. 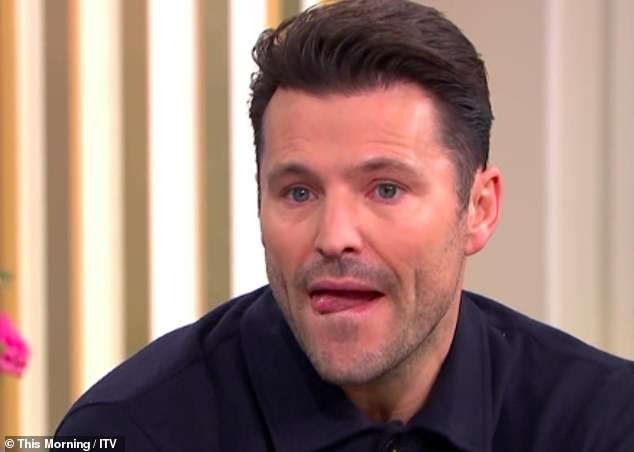 Sad: Mark Wright broke down in tears as he appeared live on Thursday’s This Morning as he recalled trying to save a man’s life

Mark was praised by the man’s daughter Victoria on social media for his quick actions.

She wrote: ‘It was my Dad who had the cardiac arrest in Tenerife.

‘I want to thank you again for your help and support, without it my mum wouldn’t have had the opportunity to say her goodbyes to Dad.

‘You are an absolute star and I’m so grateful you were there, you did your best and I’ll forever be grateful to you.’

A British Heart Foundation (BHF) spokesperson said: ‘Tragically, we know that fewer than one in 10 survive an out-of-hospital cardiac arrest in this country — a statistic we are determined to improve by giving everyone the opportunity to learn CPR.

‘Our online CPR training tool RevivR is an easy, quick and free way to learn from scratch or brush up your skills.

‘All you need is 15 minutes, and it could teach you the skills needed to save a life.’

The online RevivR training tool covers how to recognise if someone is having a cardiac arrest, how to push on the chest, how to make an emergency call and get help, and how to use a defibrillator.

It comes as the Department of Education (DfE) today confirmed that all 20,000 state schools in England will be given a defibrillator by the end of this academic year.

DfE hopes the move will save the lives of pupils, staff and school visitors. The device increase the chance of cardiac arrest survival by more than 40 per cent if they are used within three to five minutes.

Schools are already required to teach first aide as part of the curriculum, with secondary school pupils being taught CPR and about defibrillators.

Sue Hampshire, director of clinical and service development at Resuscitation Council UK, said: ‘Early CPR and defibrillation can more than double survival rates, therefore this initiative will help to save young lives.

‘Anyone can use a defibrillator, they tell you exactly what to do.’

But she said the programme could save even more lives if they are placed on school gates — where the whole community can access them, rather than just those inside the school.