EXPRESS INFORMER > Business & Finances > How do I make a will? Half of over-40s have no inheritance plan

Half of people over the age of 40 have not taken any steps to plan for later life or made a will — and so risk their home and savings failing to go to those they want to leave them to.

Just one in two have started to get their affairs in order by writing a will, arranging a lasting power of attorney or planning for inheritance tax, according to a survey commissioned by Solicitors For The Elderly and carried out by Censuswide.

The importance of having a valid will was laid bare for 51-year-old Yasmin Abdalla (not her real name) last year, when it cost her her home.

Just one in two over 40s have started to get their affairs in order by writing a will, arranging a lasting power of attorney or planning for inheritance tax

At 54, her partner, Imran (not his real name), was fit and active before he caught Covid-19 and had never written a formal will, even though he worked in the legal profession.

Yasmin and Imran had been together for nine years and in 2014 had a Sharia marriage — a union recognised by the Islamic faith. It had no legal standing, however, as the couple failed to register it with their local authority.

Yasmin, who lives in Cambridgeshire, says: ‘The whole experience has been horrendous. Imran would have been so angry if he could see what has happened as a result of him dying without a will.’

But Imran was not alone: nearly one in three over-55s are yet to write a will, while just a fifth of under-35s have one, according to insurer Royal London.

Administering an ‘intestate estate’ — the term used for those who die without a will — can be time-consuming, costly and painful for family members left behind.

James Antoniou, head of estate planning at Co-op Legal Services, says: ‘The importance of having a valid will cannot be overestimated.

Many people wrongly think their loved ones will automatically inherit their assets when they die — but if a person dies intestate, they lose control over what happens to their estate.

This could mean that their final wishes about who receives their savings, assets, property and investments may not take effect, leaving disappointed loved ones behind.’

When writing a will, it is key to think about your dependents. You need to consider how your estate is divided up, and who would care for any children under 18.

You also need to think about protecting your partner. Now that fewer people get married, the number of cohabiting couple families is increasing, according to the Office for National Statistics.

But the law hasn’t caught up, meaning unwed couples are largely unprotected if one of them dies.

Unlike married couples or those in a civil partnership, there is no legal right to property that is not jointly owned, though cohabiting couples in Scotland may be able to make claims for cash sums or assets from intestate estates. 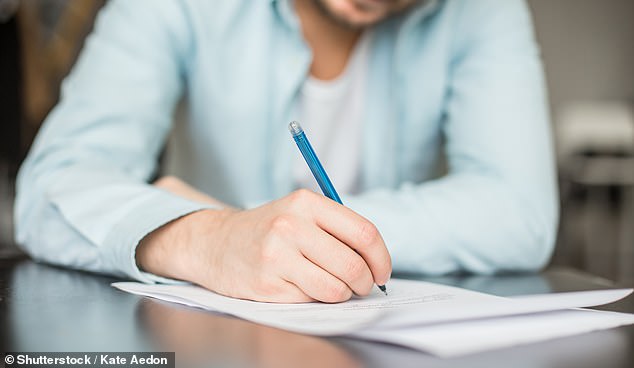 Plan: When writing a will, it is key to think about your dependents. You need to consider how your estate is divided up, and who would care for any children under 18

Clare Moffatt, pensions and legal expert at Royal London, says: ‘You could have a situation where a childless couple have lived together for ten years but the house was bought before the relationship began and is in the name of just one of them.

‘If that person dies, intestacy laws would mean that the house would be sold and the proceeds might go to the deceased person’s parents.’

For couples who jointly own a property, if one partner dies intestate then the other partner can keep the home. However, tenants-in-common could find that they end up co-owning their house with their late partner’s mother or father.

To write a will, you’ll need to take some basic steps, such as valuing your estate including property, savings, investments and other assets, minus any debts.

You’ll need to decide whether to gift anything to charity, and you must also choose your executors — the people who deal with distributing your estate after you’ve died.

When you write your will, it is often best to get advice from a lawyer who specialises in wills and probate, especially if you have complicated financial affairs.

You could also use a professional will writer or make your own.

Anyone can start a will-writing business so check that yours is regulated. Unregulated parties can put your life savings at risk.

If you choose to do your own will, you must ensure it’s valid. When you sign the will it must be in the presence of independent witnesses.

Intestate estates are not the only headache: cases with out-of-date or unspecific wills can prove just as messy, says Holly Chantler, of law firm Morr & Co Solicitors.

In one recent case, a mother had to sue her three young children in court after her husband died and she was bypassed in the handing over of his assets, Ms Chantler says.

‘The wife didn’t own the whole property and much of the home and her husband’s savings went to their young children. It was a real mess — and it could have been avoided.’

Such complications can arise where couples are registered as tenants-in-common, with each owning a specified share of a property. Joint tenancy can solve this issue.