Victorian Premier Daniel Andrews is working hard to bury his ‘Dictator Dan’ tag and reinvent himself in the lead-up to November’s election.

The tag had dogged Mr Andrews throughout Victoria’s repeated Covid-19 lockdowns, which stretched on and off for almost two years.

In November, Victorians will head to the polls to cast their vote in the first election since they spent a world record breaking period locked in their homes under order of the Premier.

Softer side: Premier Daniel Andrews has been in campaign mode throughout 2022 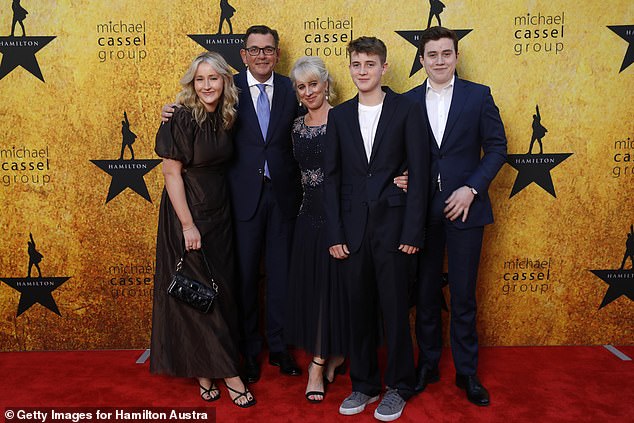 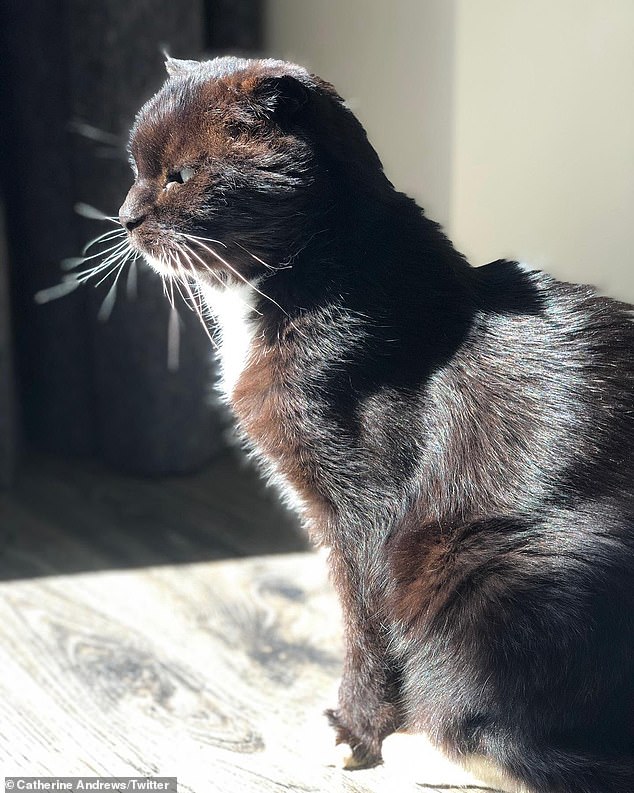 By then, the bleak misery of winter and the state’s world record breaking lockdown tally will be a distant memory for most.

This year Mr Andrews has attempted to portray a softer side to his personality, taking jibes at WAG Bec Judd when she expressed crime fears in her leafy suburb, and appearing almost human in a tweet celebrating his 50th birthday.

When he returned to work after a nasty fall he comically wore his The North Face jacket – a jacket Victorians had come to loathe during repeated lockdowns.

In March, a smiling Mr Andrews appeared on the red carpet alongside his family at the premiere of Hamilton at Her Majesty’s Theatre.

In April he announced the death of his beloved cat Felix.

Melburnians were released from their sixth lockdown on October 21 last year.

Since then, most of the familiar faces of their political lockdown captors have been forgotten – or repressed.

Four of Victoria’s most senior government ministers have since stepped down from their portfolios leading up to the next election on November 26.

Each of whom played important roles in enforcing the closure of Victoria for 262 long days. 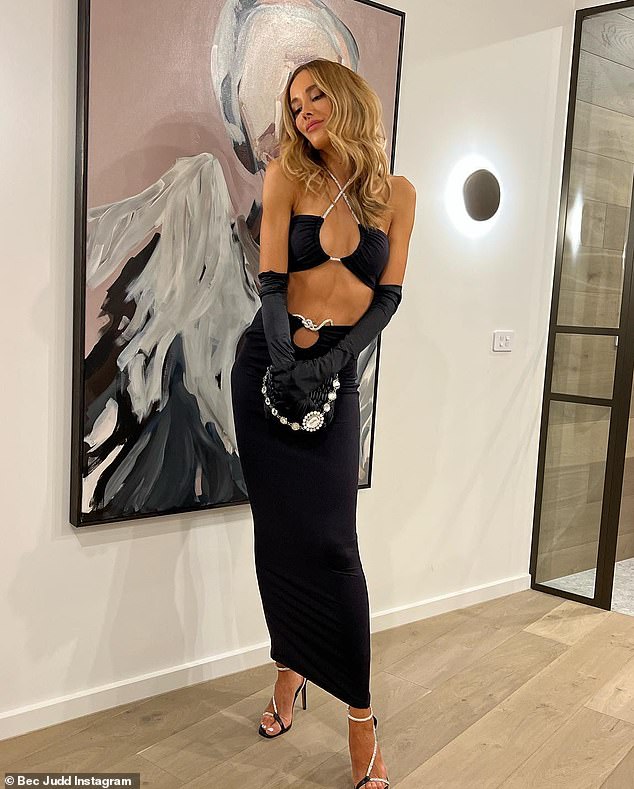 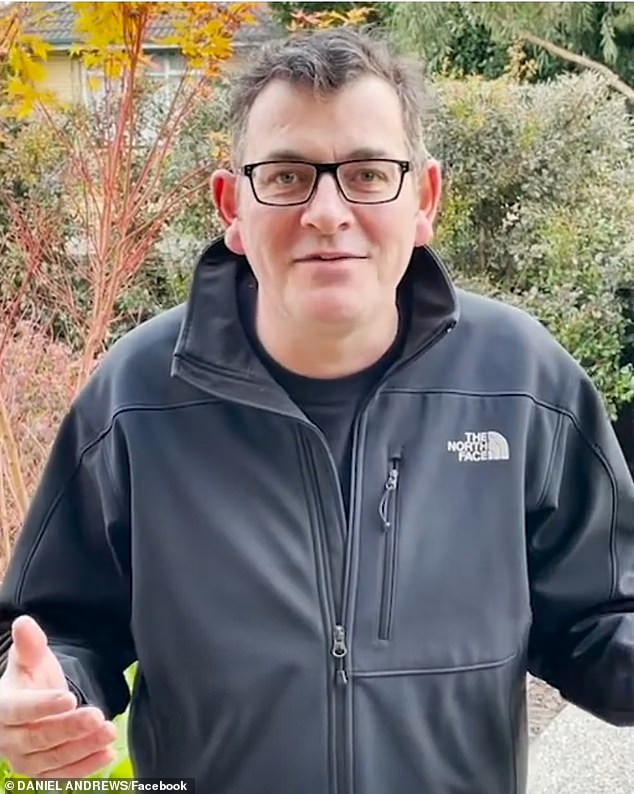 Premier Daniel Andrews donned his infamous The North Face jacket upon returning to work after a fall. It was a jacket that haunted Victorians throughout early lockdown 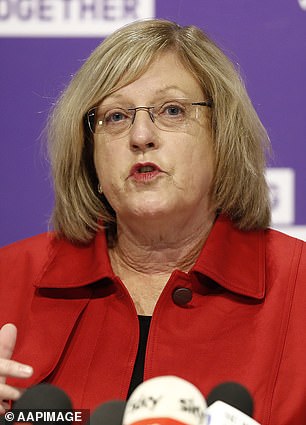 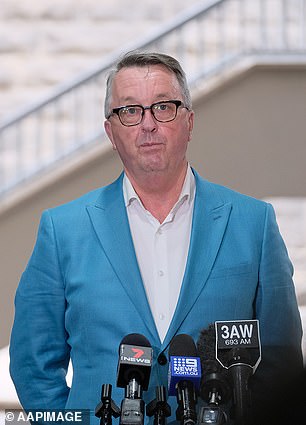 Clearing the decks: Lisa Neville and Martin Foley had been diehard Dan Andrews ministers during the Covid-19 pandemic

Their departure had nothing to do with erasing the stains of their memories on the Victorian public leading into the election, they all agreed.

‘There’s change and refresh and renewal, and that’s critically important to any team, particularly if it’s going to be the best team it can be.’

Each had watched on and forgotten how Covid-19 leaked out of the state’s quarantine hotels, dooming Victorians’ to curfews, home schooling and bans on children attending playgrounds.

While the Andrews Government’s disastrous reaction to the Covid-19 pandemic will live on in history books forever, it has continued to come under scrutiny in the months since it forced the state into billions of dollars worth of debt.

Not that the voters seem to have noticed. 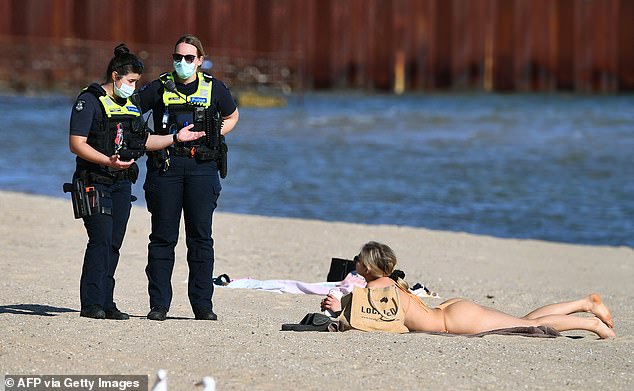 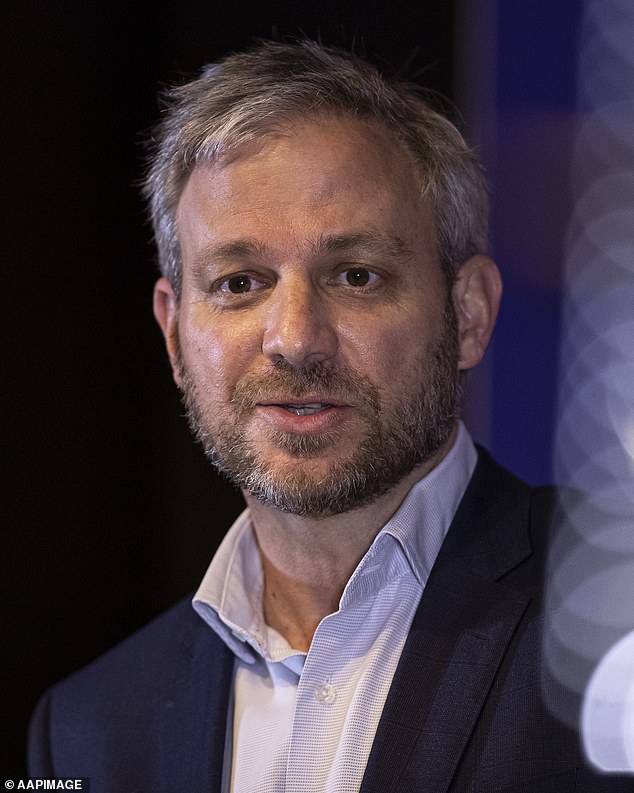 THE MYSTERIOUS DISAPPEARANCES OF THE FACES COVID LOCKDOWN

Analysing a year of media appearances, The Australian’s Media Diary found that compared to almost 1800 mentions in August 2021 alone, Professor Sutton has this year averaged 250 mentions across Australian media a month, according to research by media monitoring service Streem.

Last month Mr Andrews was forced to respond to accusations the CHO had been gagged by him.

‘I’m not his press secretary. He’s perfectly capable of answering your questions,’ the Premier said.

Like the CHO, he quickly became a distant memory for long suffering Victorians.

He popped up again last month after landing the job as chief executive of the organising committee for the Victorian Commonwealth Games.

His role is seen as a reward for his ruthless enforcement of Mr Andrews’ strict Covid-19 restrictions.

Just last month it was revealed the  Andrews’ government faced fresh corruption investigations being exposed and pending court convictions connected to Victorian Labor and his own socialist left faction.

The head of the Independent Broad-based Anti-Corruption Commission, Robert Redlich, told AFR he was ‘highly frustrated’ that he could not reveal further investigations underway.

‘There are other investigations which I regrettably am still not able to talk about which also shine light on these issues,’ Mr Redlich said.

These included prosecutions underway and sentencing cases for ‘a number of electoral offices’.

It comes hot on the heels of public IBAC hearings into allegations of branch stacking within the Andrews Government.

The AFR reported Mr Andrews was involved in multiple corruption investigations in addition to a WorkSafe investigation into his private office over allegations of bullying.

Despite serious concerns over Mr Andrews’ reign at the top, his likelihood of re-election has been bolstered by his insipid, bungling and equally as suspicious opposition.

Just last week, opposition leader Matthew Guy was forced to defend allegations of corruption after his chief of staff Mitch Catlin was exposed for asking for more than $100,000 in payments to his private business from a party donor.

Mr Guy, who was referred to the police by the state government over the matter, lashed out after Mr Andrews’ lackies asked him to ‘come clean’ on the matter.

‘We value integrity… I will not be lectured by this government on integrity matters,’ Mr Guy said during a heated press conference.

‘I will not be lectured by a government that is fundamentally corrupt.’

Then on Thursday his diary manager become the third member of his team to quit. 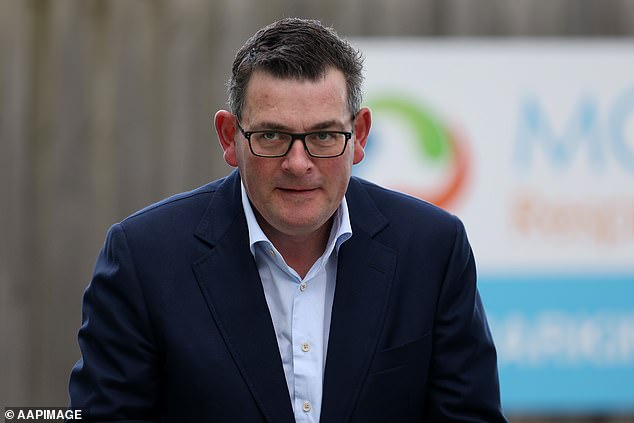 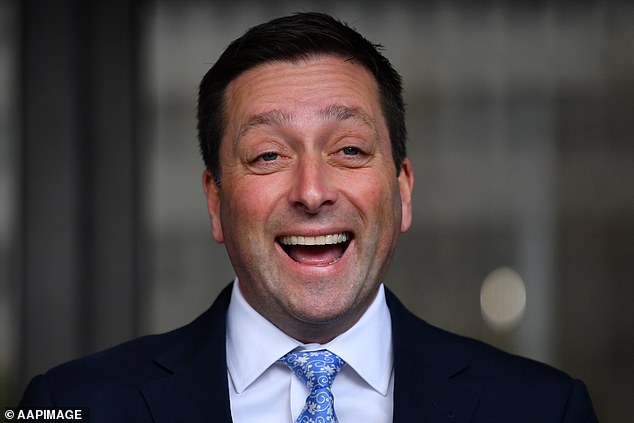 Matthew Guy had every opportunity to wipe the floor clean of Labor, but has failed to meet expectations

The Liberal Party has suffered a public relations nightmare of its own over the past two years.

Former party leader Michael O’Brien was accused of taking pot shots from the cheap seats during Victoria’s lockdowns before he was ousted from the job late last year by Mr Guy, who impressed the public with some stirring lockdown speeches.

The opposition would gift Mr Andrews again shortly after when opposition attorney general Tim Smith drove his car through a fence while drunk at the wheel.

Last month, a Roy Morgan Snap SMS Poll suggested Labor would win another term with 59.5 per cent of votes on a two-party preferred basis.

The results of the survey showed a 2.2 per cent increase in support for the ALP from the 2018 election, which it won with 57.3 per cent of votes on a two-party preferred basis.

It was the same month it was revealed anti-lockdown ‘rebels’ arrested, locked-up and fined during lockdown were quietly being let off the hook in the run up to the election.

The reasons given by prosecutors revolved largely about the lack of ‘public interest’ in carrying out trials.

One lawyer suggested it had more to do with Mr Andrews erasing history leading up to November.

‘It looks like a belated attempt to mute community anger about police tactics during the pandemic in the lead up to the election,’ he said.

‘A jury trial would have reminded people’.

On Thursday, Mr Andrews’ beloved The Age newspaper published a scathing opinion piece reminding Victorians about how hard he stuffed up his pandemic response.

The piece was accompanied by a photograph of Victoria Police officers standing over an elderly man while he sat alone on the beach.

And an image that ‘Dictator Dan’ is fighting hard for Victorians to forget. 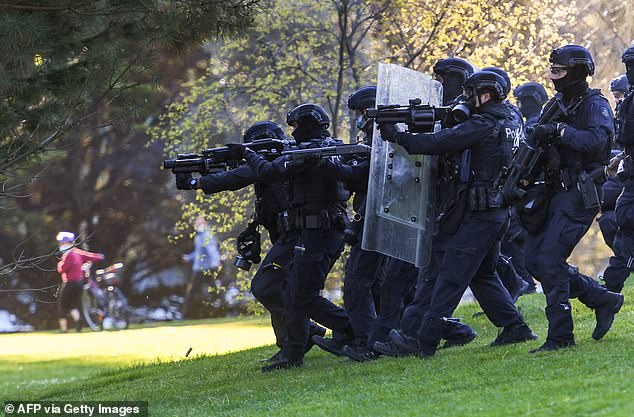 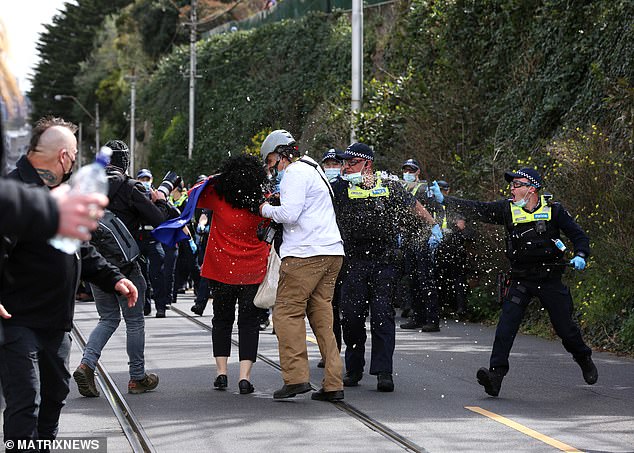 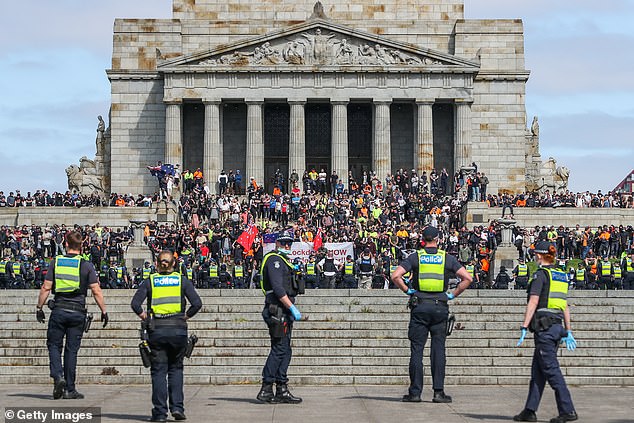 LEST WE FORGET: Dan Andrews turned on Covid-19 protesters with extreme force