Fear-mongering Covid zealots are pushing for mask mandates and enforced social distancing to keep Australians trapped in the pandemic – even though there’s no official health advice to back the measures.

Two highly-infectious sub-strains of the Omicron variant, known as BA.4 and BA.5, are sweeping across the world and causing global staff shortages in schools, hospitals, and the private sector.

In the 24 hours to Friday morning, 43,491 new cases of Covid were reported across Australia.

While the strains are far more contagious than previous sub-variants, governments have resisted reintroducing restrictions because there is no evidence to suggest they are more dangerous than previous Covid mutations.

However, that hasn’t stopped lockdown-happy extremists from spouting non-official advice to scare others into joining their campaign of fear.

Earlier in July, influential American writer and speaker Stephanie Tait, 35, told her 31,000 Twitter followers that governments have ‘all but abandoned us’ amid the current wave and took it upon herself to disseminate panic.

Influential American writer and speaker Stephanie Tait (pictured), 35, told her 31,000 Twitter followers that governments have ‘all but abandoned us’ 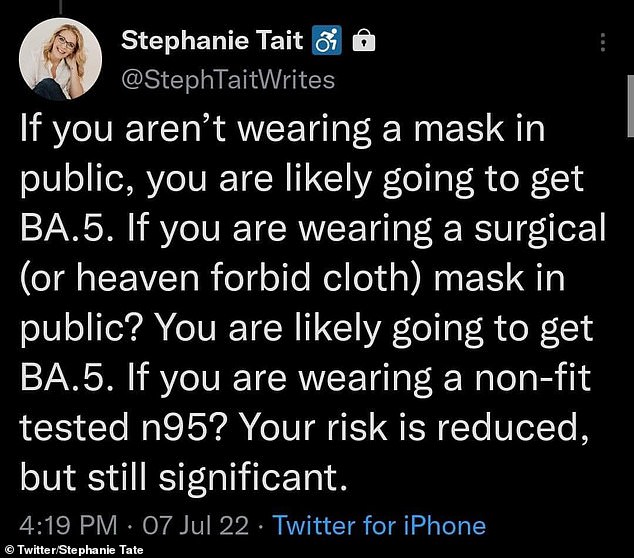 ‘If you aren’t wearing a mask in public, you are likely going to get BA.5,’ Ms Tait wrote on Twitter

Her tweet was shared widely by Australians concerned by what she had to say.

‘Eating indoors in restaurants right now is all but a guarantee you’ll get infected in this wave. Eating outdoors at most restaurants is unfortunately still a decent risk with BA.5, because there just isn’t enough distance from others to fully mitigate the danger.’

She went on to suggest governments were actively trying to hide the severity of the new strains and people shouldn’t rely on official health advice to inform their behaviour.

‘Reduce your risk by cutting back on whatever non-essential interactions you can. If you can switch to curbside/delivery? Do it. Even if you have access to quality respirators rated n95 or higher, if you CAN avoid it, then right now that’s highly advisable,’ she wrote. 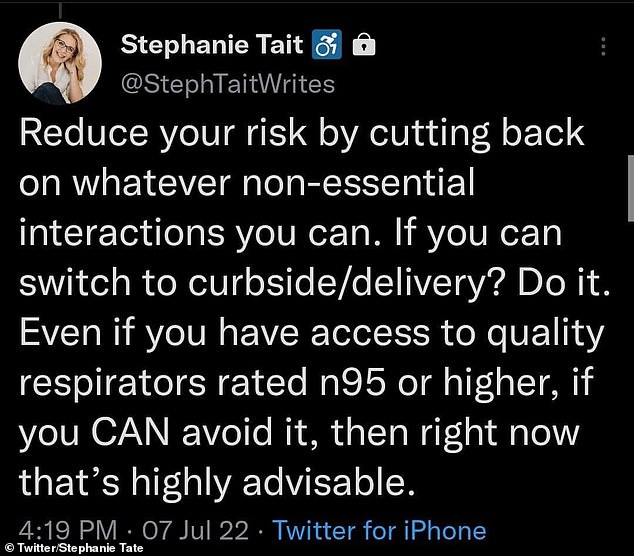 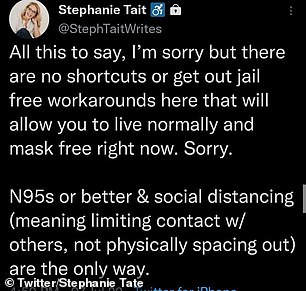 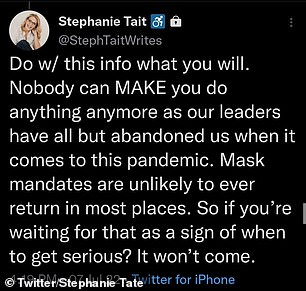 ‘Move any gatherings you can outdoors, and even then you should still use masks. If you need to eat/drink then distance each household away from each other outdoors and resume masking once you have finished.

‘Even if you’ve managed to dodge Covid so far, PLEASE don’t assume whatever you’re doing will still be safe. This isn’t the same Covid as before.’

Ms Tait went as far as to tell others that there was no conceivable way they could live normal lives: ‘I’m sorry but there are no shortcuts or get out jail free workarounds here that will allow you to live normally and mask free right now. Sorry.’

The unsolicited Twitter spiel was not representative of the latest advice put forward by governments.

Authorities who said new restrictions were not necessary amid the latest wave are the same authorities who locked nations down twice over the past two years – once when the pandemic began, and again amid the rise of the Delta variant. 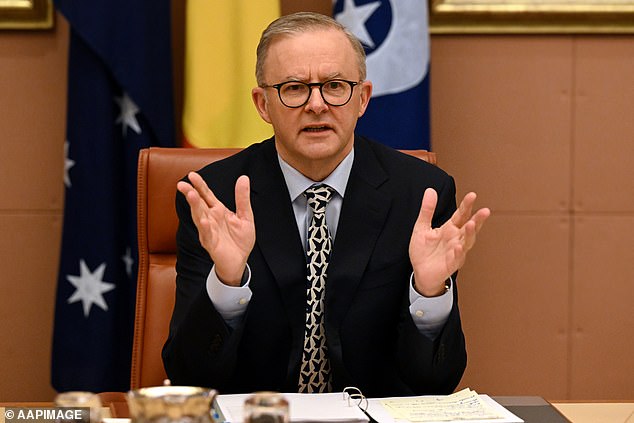 Prime Minister Anthony Albanese has continually rejected calls for national mask mandates and restrictions despite the BA.4 and BA.5 wave.

‘We know the Covid pandemic is not over and people should continue to act in accordance with the health advice,’ he said on Friday.

‘We want to keep the economy open and the key to that is limiting the health impact on Australians.’

Ms Tait isn’t the only one spouting her own agenda on social media, irrespective of official health advice.

Tony Windsor, the former MP for New England in NSW, continually pushes for the reintroduction of masks and restrictions on his Twitter page. 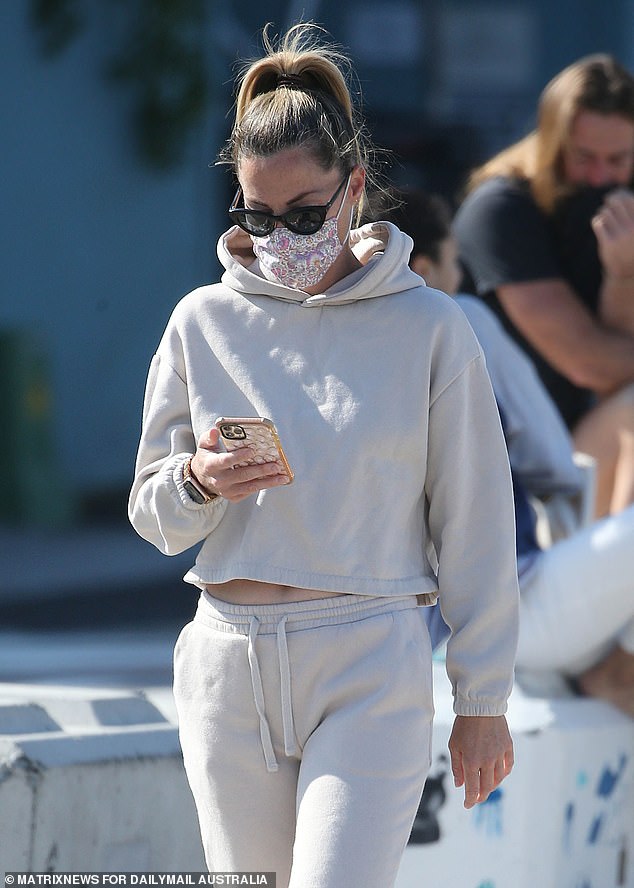 ‘See if “strongly encouraging” is more effective as a public health strategy than “urging” and “recommending” mask wearing indoors,’ the post read.

‘Without a mandate, people are just ignoring public health advice.’

Doctor Phelps, meanwhile, also retweeted numerous calls for the return of mask mandates and other restrictions.

She retweeted one woman who suggested Australians can ‘no longer class ourselves as a community’.

‘When we force our vulnerable, disabled, and elderly to isolate at home, in order to protect themselves, while the rest of the population does what it wants,’ the post read.

In a tweet directed at Mr Albanese, she wrote: ‘The only way you can protect the vulnerable is to make some tough decisions about reducing #Covid19 transmission including PCR testing, supporting isolation and masks.’

A mother-of-four from Melbourne told her Twitter followers that she ‘nearly cried when [Labor MP] Stephan Whitlam said we have to “treat it as endemic”.’

‘It made me feel politicians aren’t looking at epidemic curves. Another variant will be along after BA.5. Another surge. It’s not endemic.’

‘I cannot believe the present weakness of the Andrews Government on Covid,’ he wrote on social media. 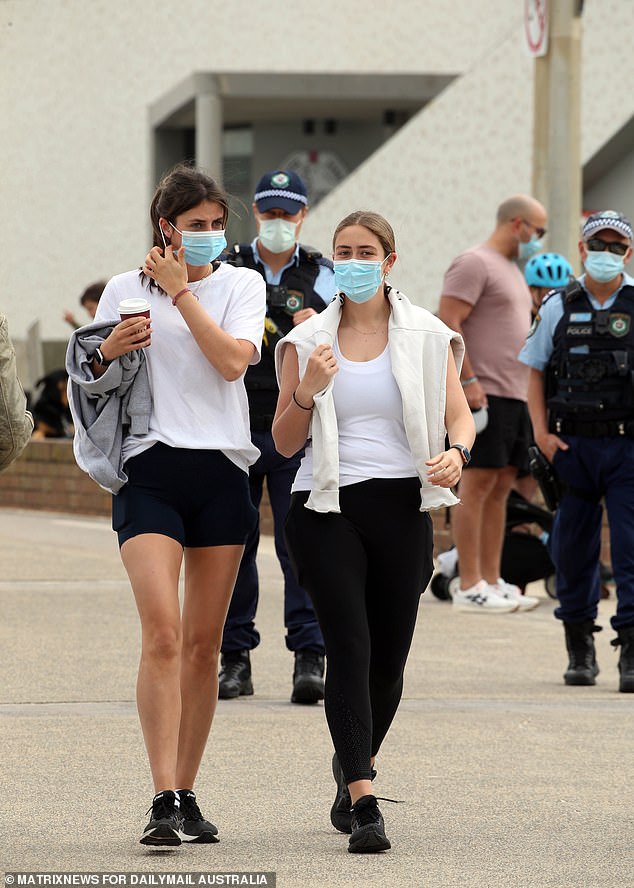 ‘It seems to have completely lost its nerve and succumbed to business pressure in ignoring the CHO and AMA advice on mask wearing. Since when has business had such influence over public health issues.’

Mr Andrews championed some of the toughest Covid measures in Australia throughout the Delta wave in 2021, despite heavy criticism.

He introduced nightly curfews and mandatory masks in outdoor settings, as the armed police officers marched through parks and children’s playgrounds.

Another user, retweeted by Dr Phelps and Mr Windsor, called people who don’t want to live with restrictions ‘freedumbs’ who are ‘too stupid to realise they identify each other through their likes and conversations’.

Mr Albanese has meanwhile argued the mandatory seven-day isolation period was necessary to combat surging Covid cases and ease pressure on hospitals – even though a large portion of the strain on the healthcare system is coming from a surge in influenza cases.

Australia recorded its worst May on record with 65,770 confirmed influenza cases – more than double the number set before lockdown in 2019.

There is no mandatory isolation period for influenza.

Those with Covid are not required to isolate in countries such as the UK or Switzerland, while they are only ‘recommended’ to self-quarantine for five days in the US.

Face masks are not enforced in the UK or Switzerland either – while Australians are still required to wear them while catching public transport or visiting a hospital.

Countries such as Sweden also no longer categorise Covid as a ‘critical illness’.

Covid-related staff shortages in Australian hospitals, schools and businesses are being amplified by a new rule to send patients back into isolation if they are reinfected with Covid.

The Australian Health Protection Principal Committee, which advises the state’s health ministers on public health protection, decided on July 12 to cut the Covid reinfection period from 12 weeks to 28 days in the face of the growing outbreak of the less deadly, but more infectious, Omicron variants BA.4 and BA.5.

The Labor government signed off on the decision and it was mandated across Australia.

A well-placed source said the decision was made ‘unilaterally by the bureaucrats without any consideration for what it means in the real world’ and ‘exposed the naivety of the new Albanese Government’ in dealing with health advice.

‘That is, it’s always just advice,’ the source said. ‘There was a “lie” told to Australians throughout Covid by leaders that we were “only following the health advice”. That was never true.’

The decision to adopt the reinfection period means that if someone was reinfected with Covid after just 28 days, they would be forced into another seven-day isolation period.