It’s little wonder the coronavirus pandemic has caused sleepless nights and dampened the mood of the nation, but fascinating new research helps pinpoint the exact highs and lows of the continuing crisis.

Sleep tech firm Simba analysed the data of 55,000 British users of the Simba Sleep App, which tracks hours and quality of sleep, as well as additional factors like alcohol consumption and overall mood.

Data shows how Britons experienced changes in their sleep and mood in line with major developments in the response to Covid-19.

Schools breaking up for summer, for example, coincided with a boost in sleep quality that could be attributed to parents feeling more relaxed after months of home schooling.

The launch of Eat Out To Help Out was tied to an improvement in mood.

Britain’s mood soared in September when children finally returned to school after almost six months off – but plummeted again when Prime Minister Boris Johnson announced the Rule of Six. The edict limiting social interaction also saw a surge in restless nights for many, according to the study by sleep tech firm Simba. Pictured: an infographic reveals how Britons’ sleep quality and mood changed from July 4

The data reveals we slept better and were much happier and less stressed after the kids broke-up for summer in late July – ending four gruelling months of homeschooling for many.

While our spirits were visibly lifted on July 4 when the pubs and restaurants reopened, according to the data, the graph on alcohol consumption indicated a possibility many regulars waited a week or two before venturing to their local.

Low points in mood and sleep quality through the summer could be attributed to the imposition of local lockdowns which at one point left a total of ten million Britons subject to restrictions.

Another high-point was Monday August 3, when the Government’s Eat Out to Help Out Scheme began allowing the nation to finally get out of the house and enjoy cut-price pub and restaurant grub

And the nation’s upbeat attitude was also clear in the run up to A-Level results day on August 13.

But it turned out to be short-lived once again as the dreams of thousands of hard-working students were left in tatters after a flawed algorithm downgraded their scores, resulting in many being rejected by their chosen universities.

To rub salt in the wounds, August 13 was also the day it was officially announced the UK was in recession, a nightmare double whammy which badly affected both moods and the quality of our sleep

The data also painted a fascinating picture of how the initial dramatic global effect of the pandemic left us struggling to sleep and in a high state of stress during what Simba identified as five key stages. 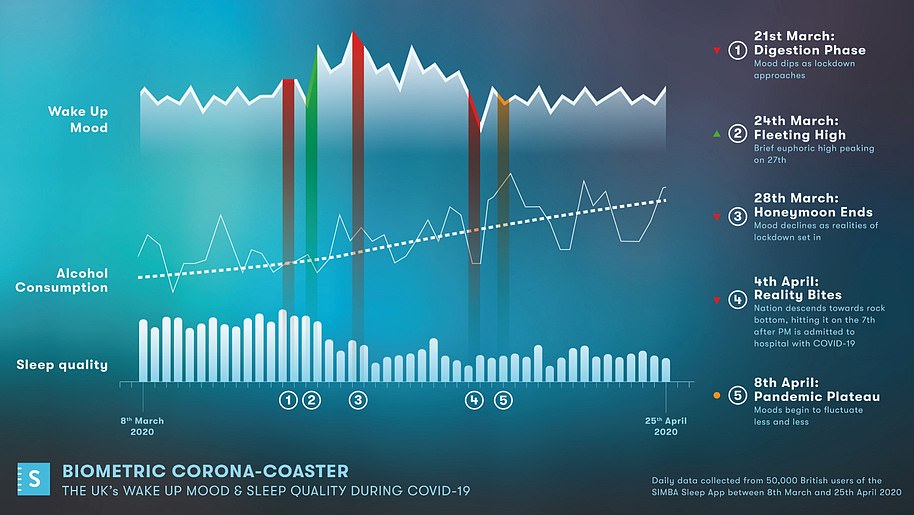 An infographic reveals how people’s sleep quality, alcohol consumption and wake-up mood changed from the start of the pandemic until April

The ‘Digestion’ phase (March 21) kicked in as lockdown approached, with the nation taking time to get their heads around what was happening. Generally peoples’ mood dipped but sleep quality remained relatively constant.

Then the nation enjoyed a ‘Fleeting High’ (March 24) a week into working from home amid feeling of joy at avoiding long commutes, and the freedom of being away from the office.

The ‘Honeymoon Ends’ period came next (March 28) as the reality of lockdown set in and the nation’s spirits slumped, while sleep quality continued to decrease.

‘Reality Bites’ then occurred (April 4) as Britain hit rock bottom when PM Boris Johnson was admitted to hospital with Covid-19 symptoms which later almost claimed his life. By this point the overall sleep quality is significantly worse than it was in March.

The ‘Pandemic Plateau’ (April 8) stage then arrived as people were resigned to lockdown and the long summer which lay ahead. Sleep quality and mood is lower but fluctuates less. The graphic also shows a steady increase in alcohol consumption since March.

Hot on the heels of that low point came another boost days later when the Government made a dramatic U-turn by ditching the controversial algorithm and allowing teachers to grade A-Level and GCSE students instead.

The week many state schools reopened for the first time in six months saw a definite marked improvement in the feel-good factor; the app recorded surges and spikes in happiness and quality of sleep once the children were back in class.

But once again that all came crashing down when on September 9, Boris Johnson was forced to announce the law which bans more than six people gathering for a social catch-up at home, outdoors or in pubs.

The ruling not only dampened our moods, but also affected the quality of our sleep that night.

The emotional roller-coaster took another upturn shortly afterwards though when the Premier League, Football League and entire pyramid of non-league seasons kicked off again.

Dr Andy Cope, an expert in positive psychology, a qualified teacher and best-selling author who analysed the results for Simba, said: ‘It’s amazing how our sleep quality maps against the major news events.

‘It’s obvious that it’s hard not to get sucked into the 24/7 pandemic pandemonium.

‘Simba’s data shows that, for many people, getting good quality sleep has become a bit of a lottery, hence our wavering state of wellbeing.

‘The pandemic has created peaks and troughs, whereas a regular habit of eight hours sleep would go a long way to enabling us to cope with the demands of lockdown, home schooling, social bubbles and furlough.

‘The virus has tipped normality upside down and brought with it worries over our own health and futures, as well as those of our elderly relatives, friends and colleagues.

‘An easing of lockdown, the reopening of pubs and the death of the A-Level and GCSE algorithm have all brought spikes of wellbeing. But there appeared to be a real tangible sigh of relief when schools reopened, reflecting that it’s been a summer like no other.

‘We hoped the worst might be over as the government encouraged us back to work and school. Humans love patterns and routine. Early September felt as though normality was back. Little did we know!

‘But the introduction of the Rule of Six was like having a huge collective rug pulled from under our feet just when we were hoping the situation was improving. The “new normal” continues to shapeshift. We crave structure and yet the world continues to throw turmoil our way.’

Simba’s Sleep App, available on iOS and Android, tracks the quality of a user’s sleep using an algorithm which combines factors such as how long they sleep and whether they are in a light or deep sleep.

Other elements which come into play are how often users wake up during the night, who stressed they were when they went to bed, whether they drank coffee or alcohol and their mood on waking. From that Simba calculates an overall score between one and 100.