The devastating coronavirus crisis that has ripped across the world this year has fulled the rise of the phrase ‘the new normal’ as people adapted to a different way of living.

But as the wave of the pandemic rolled from the Far East to the West it also catalysed a surge in more abnormal thinking and behaviour.

Conspiracy theorists have made unsubstantiated claims the virus was caused or helped by 5G masts, which were being built to support the new wireless technology that quickens internet speed.

Thugs attacked mobile phone towers in the UK, Europe, the US and other parts of the world over fears they were harming health and spreading the killer virus.

The belief has been spread on social media sites like TikTok and by now-infamous conspiracy theorists including former footballer David Icke and ex-Labour leader Jeremy Corbyn’s brother Piers.

It has also been linked to other groups that have sprung up amid the pandemic, including the anti-vaxx movement, which has been supported by suspended NHS nurse Kate Shemirani.

Most chillingly, bomber Anthony Quinn Warner attacked an AT&T building in Nashville in the US on Christmas Day, possibly spurred on by his belief 5G cellular technology was killing people.

Here, MailOnline looks at the key members of these conspiracy groups and what they have done to peddle their lies.

Conspiracy theorists have made unsubstantiated claims the virus was caused or helped by 5G masts, which were being built to support the new wireless technology that quickens internet speed. Pictured: A tower in Bradford this year 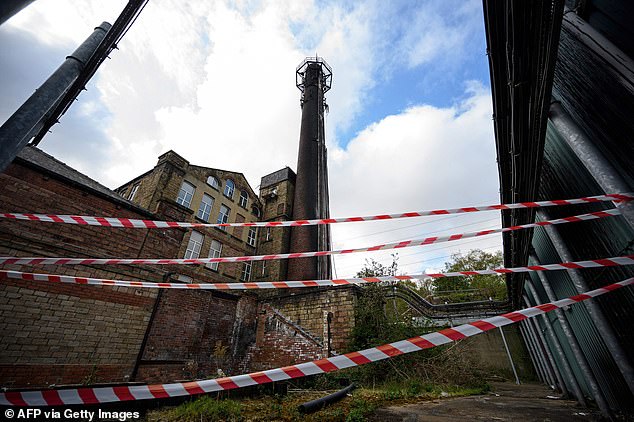 Thugs attacked mobile phone towers in the UK (pictured, Huddersfield), Europe, the US and other parts of the world over fears they were hampering their health 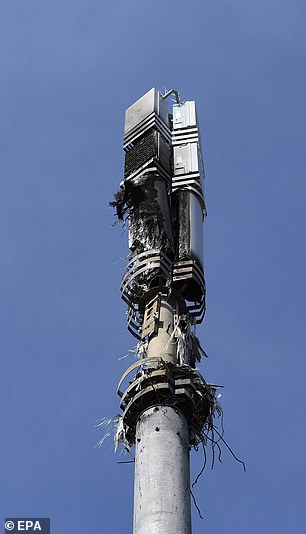 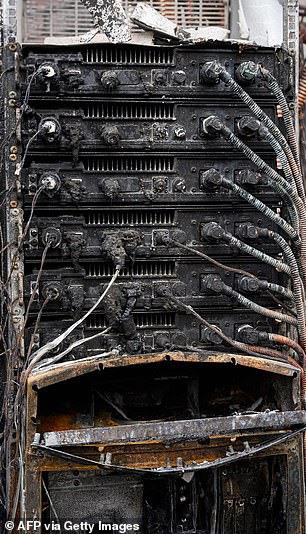 David Icke is a notorious conspiracy theorist who often makes headlines for his controversial comments.

Born in 1952, the 68-year-old former professional footballer has written more than 20 books and once tried his hand at punditry and sports reporting.

In 1991, he appeared on Sir Terry Wogan’s TV chat show where he declared himself as the son of God in a now-infamous clip which he describes as a ‘defining moment’. 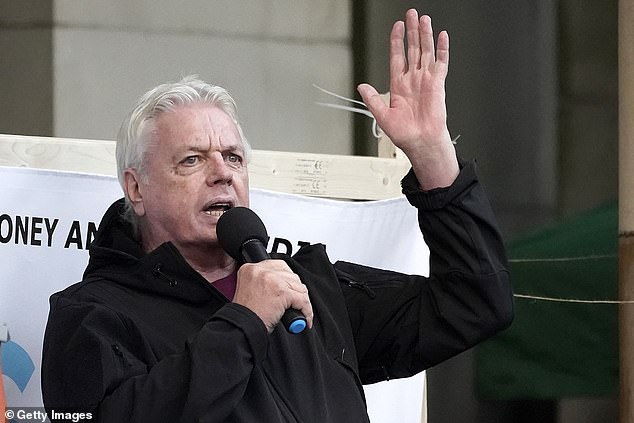 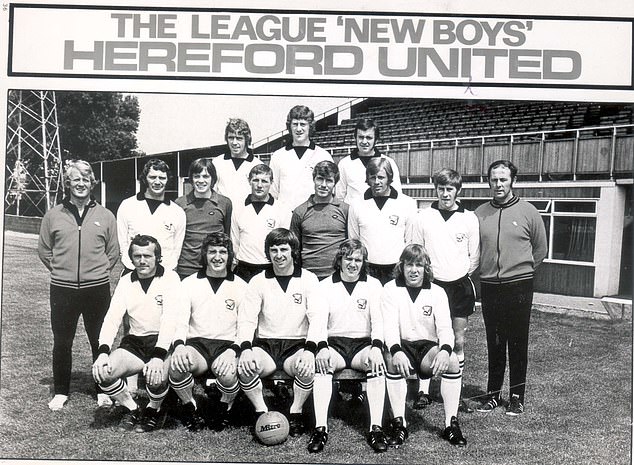 David Icke is pictured middle row, third from left during his days as a goalkeeper for Hereford United

It was from here that he began writing his books and making bold predictions including that the world would end in 1997.

Other bizarre claims he have made include that the royal family are lizards.

Icke also believes that an inter-dimensional race of reptilian beings called the Archons has hijacked the earth and is stopping humanity from realising its true potential.

The 68-year-old has said the universe is made up of ‘vibrational’ energy, and consists of an infinite number of dimensions that share the same space, just like television and radio frequencies, and that some people can tune their consciousness to other wavelengths.

Most recently, he has suggested the coronavirus is linked to the 5G mobile network, a claim which has never been backed up by science.

Jeremy Corbyn’s older brother Piers has been detained five times during the coronavirus pandemic which he brands a ‘plandemic’.

The 73-year-old claims Covid-19 is a ‘hoax’ and is the founder of a group called No New Normal.

He is close to footballer turned conspiracy theorist David Icke, who believes global events are decided by reptiles. 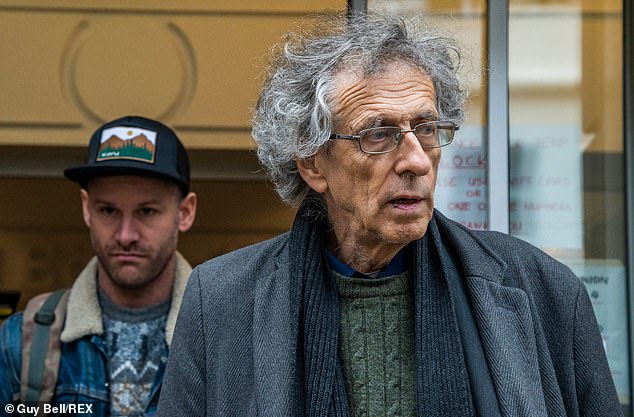 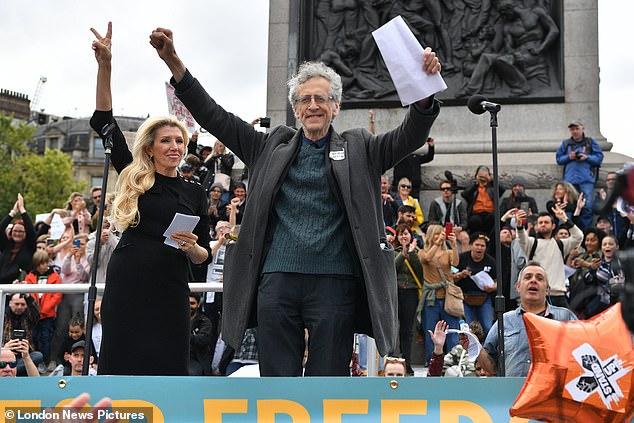 Piers Corbyn, older brother of former Labour leader Jeremy, at a protest against coronavirus restrictions and plans for a Covid-19 vaccine 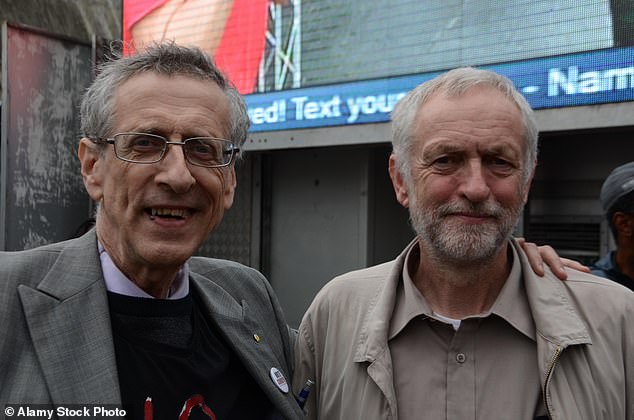 They have appeared at anti-lockdown marches and spoke on stage at one in Trafalgar Square in central London.

Piers told the Times when the Pfizer vaccine was rolled out: ‘This vaccine is experimental and the vaccine producers have no liability on sickness or death.

‘The whole thing is one of the main motives of the new world order [a conspiracy theory hypothesizing a secret totalitarian global government].’

Suspended nurse whose own son has distanced himself from here

Mother-of-four Kate Shemirani, a former nurse of 35 years, is adamant coronavirus is a hoax and claimed its symptoms are linked to the roll-out of 5G.

She has argued the vaccine is a political tool to gain access to and change people’s DNA, has likened lockdown to the Holocaust and insisted dancing NHS nurses will ‘stand trial for genocide’. 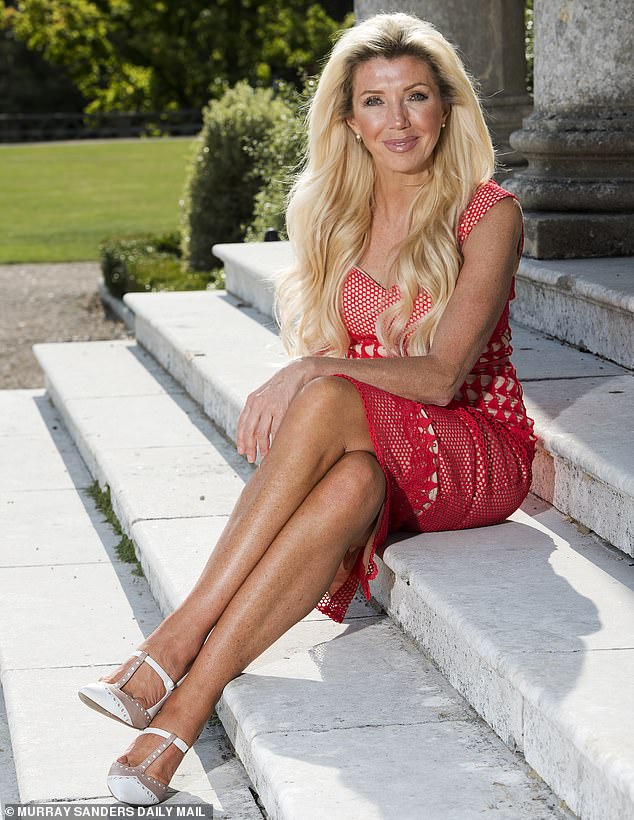 Mother-of-four Kate Shemirani, a former nurse of 35 years, is adamant coronavirus is a hoax and claimed its symptoms are linked to the roll-out of 5G 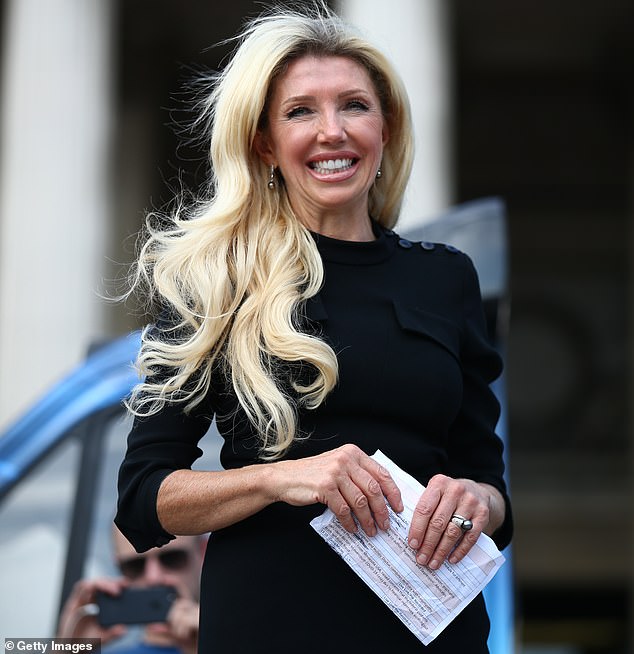 She has argued the vaccine is a political tool to gain access to and change people’s DNA, has likened lockdown to the Holocaust and insisted dancing NHS nurses will ‘stand trial for genocide’

She is a headliner at anti-lockdown rallies, having joined conspiracy theorists David Icke and Piers Corbyn at a protest in August.

She directed yobs to confront riot police whom she branded ‘dirty dogs’ and mocked for wearing face masks at a rally in September.

Her son Sebastian, 21, said he is concerned about the impact his mother’s claims could have on public health and branded her ‘dangerous’ and an ‘attention-seeker’.

From attacking 3G masts in the 1990s to torching towers in 2020: The history of 5G conspiracy theories

Conspiracy theories over mobile networks have a long history, with protesters regularly ripping down 3G base stations near schools and homes back in the early 1990s.

In those days people feared the masts were a cancer risk and whether there was enough testing conducted – claims also hurled against WiFi as it was unveiled around the same time.

Even before Covid-19 emerged in December last year large swathes of people were already fearful of the health dangers posed by the installation of 5G.

One of the first targeted attacks on a mast came in 2018 when a man scaled a lamppost to tear down what he thought was a 5G antenna in Gateshead.

Later, in May last year, a picture of a man wearing a hazmat radiation suit – supposedly to install a deadly 5G tower in the US – was thought to actually be a cleaner or painter sprucing up the mast and covered up due to bird droppings or liquid splash back.

And just before the coronavirus struck, in December 2019, conspiracy theories went rampant online after images of hundreds of dead starlings were shared on a road in North Wales.

So it is perhaps unsurprising that conspiracy theorists leapt on the coronavirus pandemic to peddle yet more negative claims about 5G.

These started to emerge in public and private social media groups as early as January – two months before the UK went into its first lockdown – as users shared ideas that 5G was weakening people for Covid-19 to capitalise on.

But since then theories have varied wildly, including that the disease is caused by 5G and the virus is a myth, the pandemic is a hoax so the government can install 5G as well as spurious notions about Microsoft founder Bill Gates such as that he started the ‘plandemic’ to control people.

Some even suggest Covid broke out in Wuhan in China due to the early presence of 5G masts there.

Dr Joseph Downing, a fellow in nationalism at the London School of Economic, explains: ‘These conspiracy theories rely on a grain of truth or a grain of fact which is then extrapolated forward into something that’s ludicrous.’

As lockdowns were introduce globally and people’s personal freedoms were reduced, the extremity of the claims appeared to ratchet up.

Meanwhile only last week a bomber called Anthony Quinn Warner attacked an AT&T building in Nashville in the US on Christmas Day, possibly spurred on by his belief 5G cellular technology was killing people.

Such was the severity of the 5G conspiracy issue, an IPSOS study found 10 per cent of interviewees held a negative opinion towards the technology.

The research also tested some myths and found while a small minority believes in them, a substantial amount of Europeans are not sure they are false either.

The myths around 5G appear to have been spread mostly through social media pages, with giants such as Facebook, YouTube and Whatsapp cracking down on misinformation as the pandemic went on.